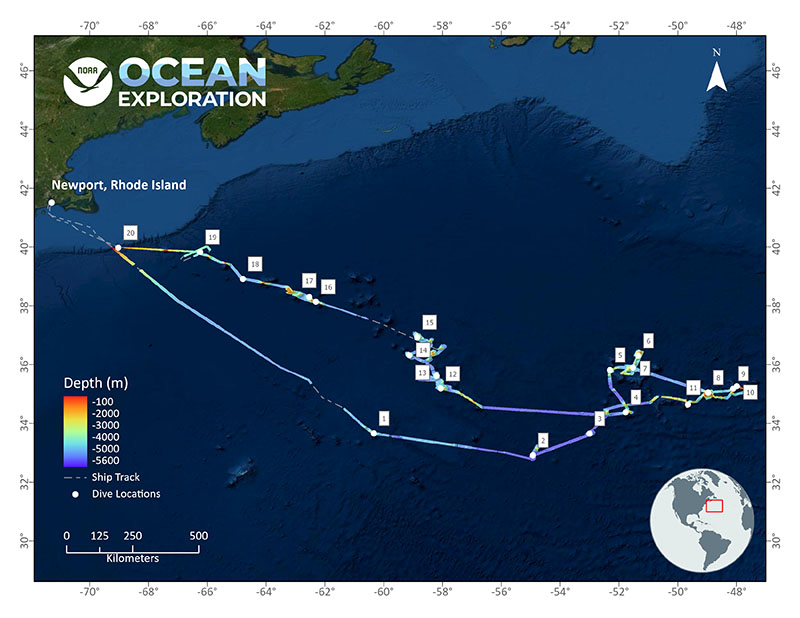 2021 North Atlantic Stepping Stones: New England and Corner Rise Seamounts was a 30-day, telepresence-enabled expedition led by NOAA Ocean Exploration to collect data on priority exploration areas in the North Atlantic identified by the ocean management and scientific communities. Mapping and remotely operated vehicle (ROV) operations yielded observations of numerous potential new species and new animal behaviors, geological samples to expand our understanding of ferromanganese crusts, data on 20 seamounts that had never been mapped before, and the engagement of audiences around the world.

Major accomplishments of this expedition are summarized below. For more information, download the summary fact sheet (pdf, 6 MB).

Deep-sea coral and sponge communities were observed on every 2021 North Atlantic Stepping Stones expedition dive except one, which was a dive dedicated to exploring the water column. High-density communities were seen at nine of the dive sites, including an unexpectedly high diversity of organisms seen while exploring Alleghany Seamount at depths of 3,447 meters (11,310 feet).

Throughout the expedition, a limited number of biological samples were collected, many of which likely represent previously unknown species. Additionally, scientists observed several potential new species, recorded significant depth and geographic range extensions for several species, and made other visual observations that yielded new insights into deep-sea animal behaviors. Examples include a potentially undescribed species of red jellyfish (Poralia sp.) in the water column at 700 meters (2,297 feet) depth, the deepest known record of rock pens in the Atlantic made on “Asterina” Seamount, a sea star (Sthenaster emmae) feeding on a coral stalk, and a slit limpet actively eating away the surface of a rock. 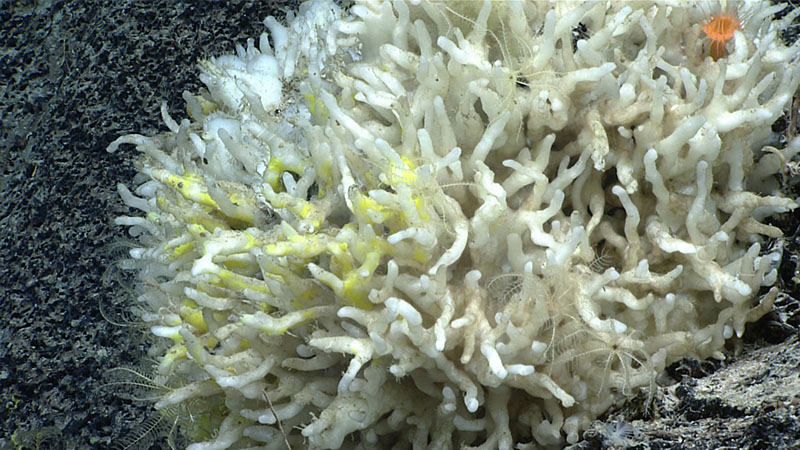 Throughout the ninth dive of the 2021 North Atlantic Stepping Stones expedition, we saw this unknown “finger sponge” in high-density patches. The white sponge was often covered in a yellow encrusting sponge. A small sample of the sponge was collected during the dive so that it can be analyzed to learn more about it and what it might be. Image courtesy of NOAA Ocean Exploration, 2021 North Atlantic Stepping Stones: New England and Corner Rise Seamounts. Download largest version (jpg, 1.2 MB).

Collectively, these visual observations and biological samples will help us characterize specific dive locations while also increasing our overall understanding of the ocean ecosystem in the region and of deep-sea ecosystem connectivity across the Atlantic basin.

During our exploration of MacGregor Seamount on the eighth dive of the 2021 North Atlantic Stepping Stones expedition, we explored along the face of a near-vertical wall that may have been the remnants of an old volcanic cone that has since been eroded away. Given that the Corner Rise Seamounts were formed by hotspot volcanism around 75 million years ago, this could indeed be a rather old feature! Video courtesy of NOAA Ocean Exploration, 2021 North Atlantic Stepping Stones: New England and Corner Rise Seamounts. Download largest version (mp4, 54.8 MB).

During the expedition, while exploring Gosnold Seamount, the team made the first visual confirmation of ferromanganese nodule fields in the New England Seamount Chain region, a discovery that is a valuable contribution to understanding seamount nodule occurrences in the Atlantic Ocean. Further study of these nodules will also inform the general formation mechanism and distribution criteria for seamount nodules around the global oceans.

Over the course of the expedition, the team mapped 40 seamounts — 20 of which had never been mapped before! Fourteen of the 20 dives were “map and dives,” where higher-resolution mapping data needed to successfully execute the dive were collected just hours before the dive took place, because previously there was no or poor data at each dive site. All together, the team mapped an area larger than the country of Croatia.

The mapping, visual surveys, and sample collections completed during the 2021 North Atlantic Stepping Stones expedition will help scientists better understand the geologic history of the region, characterize habitat substrate, and learn more about natural resources, such as ferromanganese crusts.

Engaging the Scientific Community and the Public 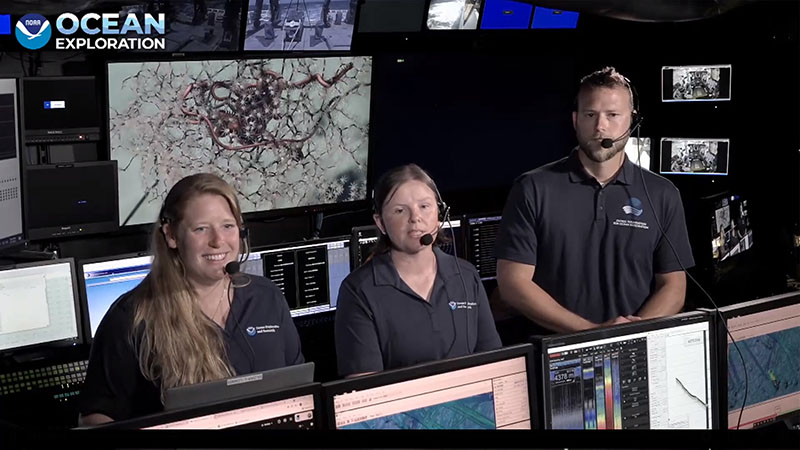 NOAA Ship Okeanos Explorer is a leading platform for telepresence-enabled exploration, which allows shore-based scientists and managers to fully engage in an expedition and enables members of the public to experience deep-sea exploration and the wonders of science and discovery in real time. During the 2021 North Atlantic Stepping Stones expedition, more than 100 scientists, resource managers, and students actively participated from around the world, including representatives from the United States, Russia, Japan, Kenya, Trinidad and Tobago, Spain, New Zealand, the United Kingdom, Australia, and Bermuda.

Additionally, public audiences joined the discovery, with live video streams receiving more than 191,000 views and expedition-specific web content receiving more than 14,000 views while the expedition was underway and more than 7,400 additional views coming in the month immediately following the expedition, largely due to exposure on social media and subsequent media interest. More than 350 news/web stories were published sharing expedition news, including the stories about the "real life" SpongeBob and Patrick Star and the undescribed red jellyfish. And the team hosted 10 live interactions and a Facebook lunch hour Q&A.

Data collected during this expedition will inform initial characterization of the areas visited and include multibeam, single beam, subbottom, ADCP (acoustic Doppler current profiler), XBT (Expendable bathythermograph), CTD (conductivity, temperature, and depth), and dissolved oxygen profiles; surface oceanographic and meteorological sensors; video and imagery; and physical specimens. All data from this expedition will be publicly available through national archives. A direct link to the expedition data archive will be provided on the expedition website once the data are available.