Video Feature: Identifying a Strange Squid and a Dumbo Octopod on the “Stepping Stones”

“Don't ever forget that you just may wind up being wrong.”
Jimmy Buffett – Manana

As I have written previously, first impressions are often speculative and are not necessarily the final answer. This has happened to me twice so far on the current expedition. My first guesses at identification of an interesting squid and a cool octopod were (1) probably wrong and (2) definitely wrong. Not too far off, but not a bullseye either.

Early in the 2021 North Atlantic Stepping Stones expedition, remotely operated vehicle (ROV) Deep Discoverer encountered an unusual squid at the beginning of a dive on Congress Seamount. Travelling at the time, I quickly checked the telepresence video on my cell phone in the San Francisco International Airport and was amazed to see the squid shown in the video below swimming near the bottom with its body vertical and head down.

At the start of Dive 02 of the 2021 North Atlantic Stepping Stones expedition, we imaged this small squid, which was originally thought to have been a juvenile giant squid (Architeutis dux), but is actually likely another squid in a related family (Narrowteuthis nessisi). Video courtesy of NOAA Ocean Exploration, 2021 North Atlantic Stepping Stones: New England and Corner Rise Seamounts. Download largest version (mp4, 33.7 MB).

The body proportions and shape of the fins were consistent with a juvenile giant squid, Architeutis dux. Long ago, two juvenile Architeuthis were described based on specimens that were taken out of the stomachs of fishes, one in the Atlantic and one in the Pacific, and this animal looks similar. Although DNA has since indicated that one species exists worldwide, these juveniles differed substantially in proportions of arms to the body.

Further complicating the identification, I knew that another squid in a related family (Narrowteuthis nessisi, in family Neoteuthidae) is very similar and easily confused with a small giant squid (yes, an oxymoron). However, before disappearing into the friendly skies, I alerted the other expedition participants to the possibility that this was a sighting of a giant squid at a poorly known life-history stage.

I then spent much of the next couple of days trying to determine which species was encountered. Ultimately, the decision hinged on development of the fins and therefore on the overall size of the squid. The fins and end of the body become pointy with growth in Architeuthis but not in Narrowteuthis. Unfortunately, the measuring lasers weren't on and would not have been much use on a skinny vertical squid up in the water. An estimate from someone on the ship of overall squid size was 30-60 centimeters (1-2 feet). Given its lack of posterior pointiness at that size, the identification at that size leans toward the Narrowteuthis side of the possibilities, although the back edge of the fins are not as rounded as I would expect for Narrowteuthis.

A few days later, the ROV came across a finned octopod, sometimes called a "dumbo" because the flapping fins look like the ears of the flying cartoon elephant. Again it was close to the bottom, this time in an area with lots of deep-sea corals, as shown in the video below.

This is interesting because finned (or cirrate) octopods lay their eggs on deep-sea corals. Again on my cell phone I thought I could guess at the species because the overall body form looked like the most common species in the North Atlantic that spends most of the time swimming off the bottom, Stauroteuthis syrtensis.

However, once I had a chance to look at a good screen grab on a computer rather than a cell phone, I recognized my mistake. This was a much rarer species, Cirrothauma magna, based on the arm tips and funnel. During Census of Marine Life sampling of the northern Mid-Atlantic Ridge on a Norwegian ship, we caught 76 S. syrtensis but only one C. magna. Prior to that, C. magna was only known from four specimens. When we went back to the ridge with NOAA Ship Bigelow, we caught nine C. magna. Whereas C. magna seems to stay mostly near the bottom, S. syrtensis is found both near bottom and up in the water. 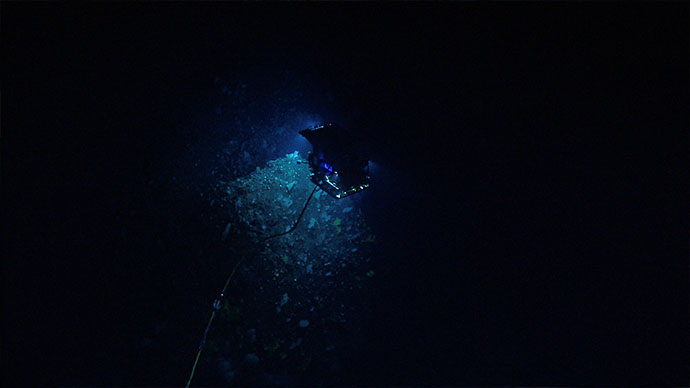