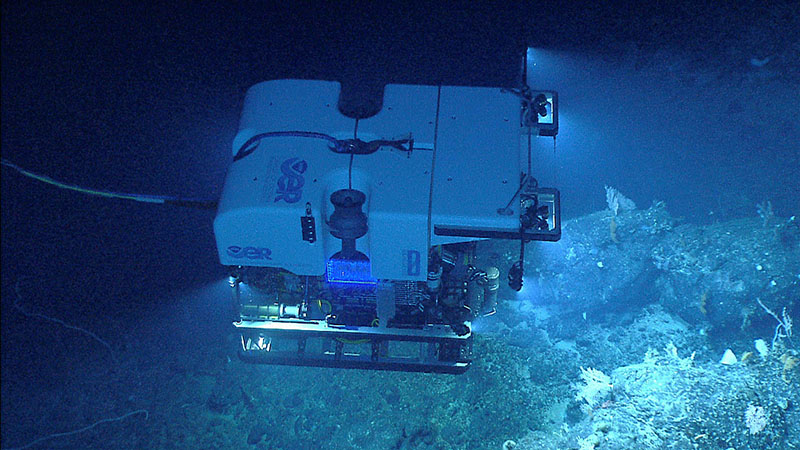 From June 30 through July 29, 2021, NOAA Ocean Exploration and partners will conduct the 2021 North Atlantic Stepping Stones: New England and Corner Rise Seamounts expedition, a telepresence-enabled ocean exploration expedition on NOAA Ship Okeanos Explorer to collect critical baseline information about unknown and poorly understood deepwater areas off the eastern U.S. coast and high seas. During this expedition, at-sea and shore-based science teams will work together to map the seafloor and observe many targeted sites in this region for the first time. Remotely operated vehicle (ROV) dives are planned from July 2 to July 28, at depths ranging from 250 to 4,000 meters (820 to 13,124 feet).

Mapping and ROV operations during this expedition will include, but are not limited to, exploration of deep-sea coral and sponge communities, fish habitats, areas predicted to have high levels of marine mineral accretion, deep seamount flanks and guyot summits, ridge seamounts, ecosystems of the Northeast Canyons and Seamounts Marine National Monument, and other unexplored areas in the New England and Corner Rise Seamounts. The data collected during a total of 25 planned ROV dives along with collected mapping data will enable scientists and managers to build a better understanding of the diversity and distribution of deepwater habitats in this region, allowing for informed resource management decisions.

Why the New England and Corner Rise Seamounts? 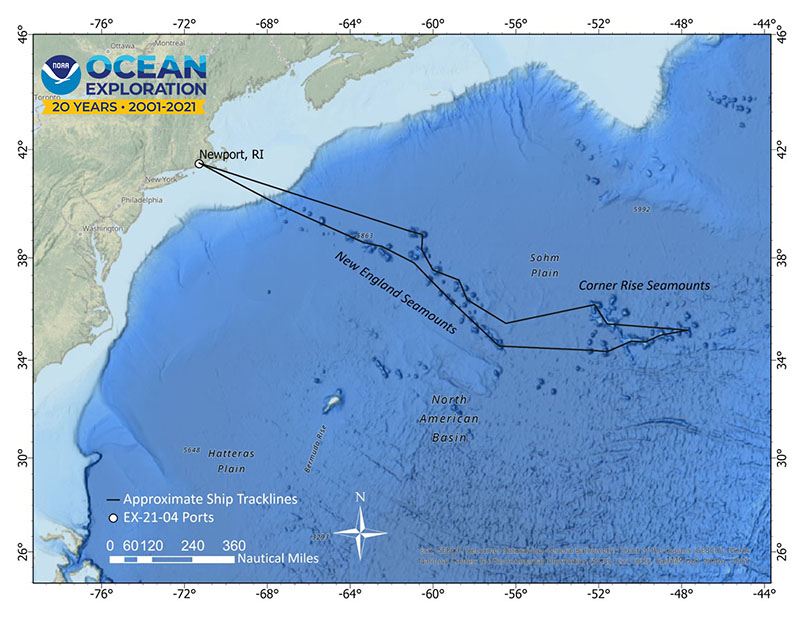 The New England and Corner Rise seamount chains comprise a line of seamounts that extend from near the Mid-Atlantic Ridge to the eastern continental margin of the United States. Together with the deep sides of the Azores platform, these features constitute a nearly continuous series of hard, submerged islands along the otherwise flat plain of abyssal mud extending across the North Atlantic Ocean.

Marine populations, such as fish and corals, do not recognize international boundaries that govern the world’s ocean. Relative to the U.S. East Coast, the New England Seamounts are some of the most prominent and closest submerged features. Both the New England Seamounts and Corner Rise Seamounts may serve as stepping stones between the eastern and western Atlantic ecosystems and offer refuge to transient fish populations. These seamounts likely also provide habitat for other organisms and may be hotspots of genetic diversity for deep-sea corals that are known to exist in deep water throughout the Atlantic.

As these features border the United States and its Northeast Canyons and Seamounts Marine National Monument, it is important to explore them in order to inform management decisions and better understand connectivity with the surrounding waters. Exploration of these seamounts also offers an opportunity to collect valuable mapping data and learn more about hotspot volcanism, seamount geomorphology, and ferromanganese crust accretion in an area where only sparse data currently exist.

This expedition builds on the 2005 North Atlantic Stepping Stones Expedition; Mountains in the Sea 2004; and previous NOAA Ocean Exploration expeditions of the New England Seamounts conducted via Okeanos Explorer in 2013, 2014, and 2019. These expeditions have laid much of the groundwork for what we now know about environments along these seamounts. 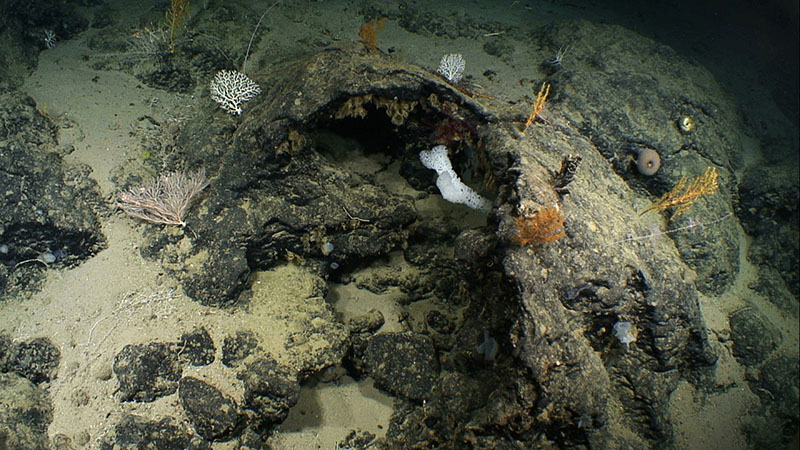 Pillow lava drainbacks imaged at Kelvin Seamount in 2014 provide evidence that, at one time, hot lava was being erupted here. The geological exploration of seamounts such as Kelvin that we will conduct during the 2021 North Atlantic Stepping Stones expedition will increase our understanding about the geology of the seamount chains in an area where sparse or no data currently exist. Image courtesy of NOAA Ocean Exploration, Our Deepwater Backyard: Exploring Atlantic Canyons and Seamounts 2014. Download largest version (jpg, 1.3 MB).

Every dive builds upon our collective knowledge of this area and each square kilometer of mapping data collected reveals something new about the seafloor. With the upcoming ROV dives and mapping, we hope to continue to enhance our understanding of this fascinating region.

During the 2021 North Atlantic Stepping Stones expedition, we will conduct 24-hour operations consisting of daytime ROV dives and overnight mapping. NOAA works with the scientific and resource management communities to characterize these areas through telepresence-based exploration. 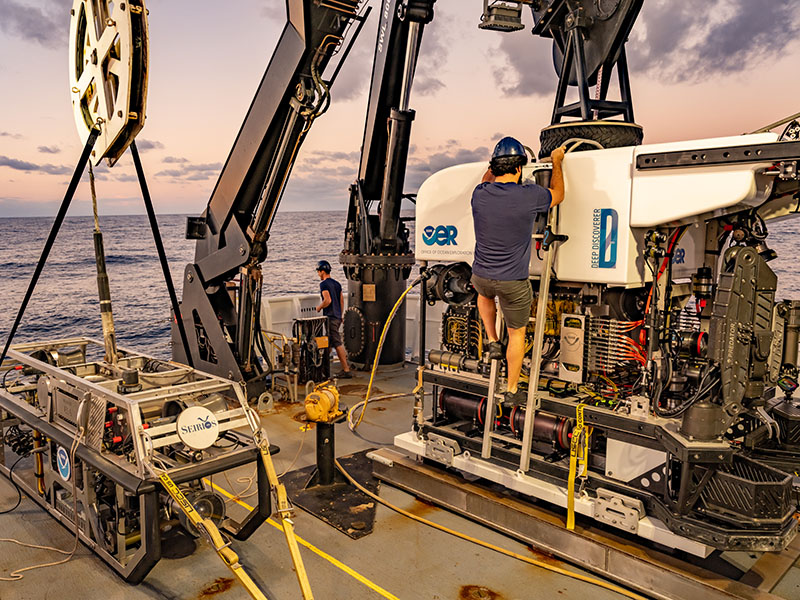 Remotely operated vehicles Deep Discoverer and Seirios make up the dual-bodied system that will be used to conduct visual surveys of the seafloor during the 2021 North Atlantic Stepping Stones expedition. In this image, the vehicles are being prepared for launch off NOAA Ship Okeanos Explorer during the 2019 Southeastern U.S. Deep-sea Exploration. Image courtesy of NOAA Ocean Exploration, 2019 Southeastern U.S. Deep-sea Exploration. Download largest version (jpg, 21.5 MB).

Operations will involve the use of the ship’s deepwater mapping systems, NOAA’s dual-bodied ROV that can dive to depths of 6,000 meters (3.7 miles), and a high-bandwidth satellite connection for real-time ship-to-shore communications. ROV dives will include high-resolution visual surveys and limited sampling. This expedition will help establish foundational information in the region to catalyze further exploration, research, and management activities.

Live video of dives can be viewed online in real time from July 2 through July 28, 2021.

Telepresence technology allows us to engage the majority of the science team from shore. NOAA Ocean Exploration uses telepresence technology to transmit data in real time to a shore-based team of scientists who actively participate in expeditions. Scientists participating from around the world contribute their expertise to operations in real time when discoveries are made at sea. 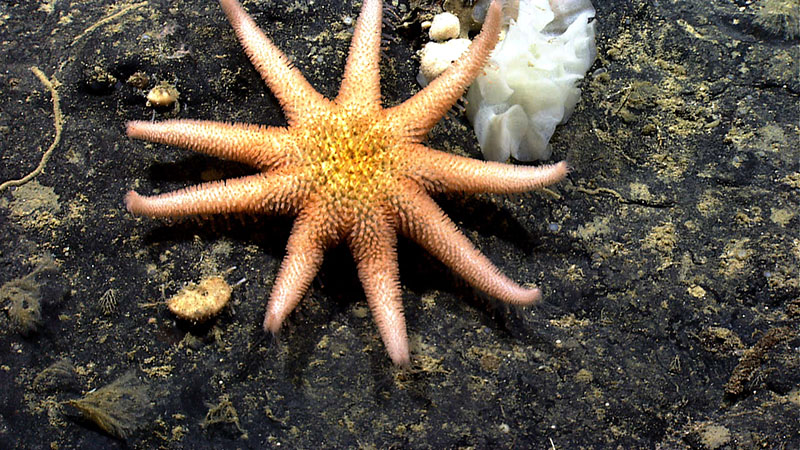 The same technology that allows scientists around the world to participate in the expedition from land also enables interested members of the public to experience deep-sea exploration, the wonder of discovery, and the fascination of science in real time! The live video feeds are available to anyone online, providing the public with a front row seat to discoveries as they are made.