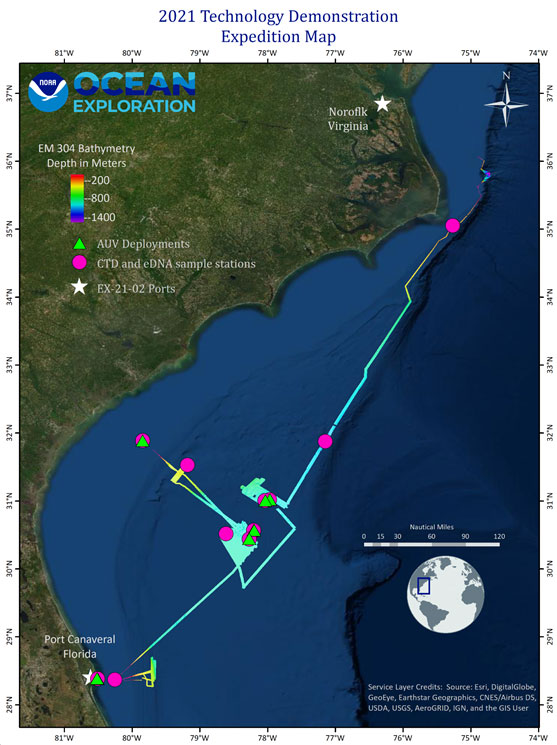 Technology demonstrations provide an opportunity to test new technologies or applications that will allow the ocean exploration community to explore deeper, farther, and more comprehensively than previously possible. Such expeditions are vital for the advancement of the ocean exploration field in our collective endeavor to explore, map, and understand the vast ocean realm. Video courtesy of NOAA Ocean Exploration, 2021 Technology Demonstration. Download MP4 version (mp4, 289 MB)..

During the 14 days at sea, eight AUV deployments were completed at depths between 12-866 meters (39-2,841 feet). AUVs Orpheus and Eurydice, the latter of which completed its inaugural dive during the expedition, surveyed 30 linear kilometers (18.6 miles) of seafloor, logged over 16 hours of bottom time, and collected over 724 GB of 4K video. Together, the AUVs spent a total of 32 hours and 59 minutes in the water, which included water column exploration during descents and ascents and surveys of Blake Plateau coral mound features. The visual data collected by the AUVs will be used by NASA JPL to inform the advancement of terrain relative navigation.

Twelve conductivity, temperature, and depth system (CTD) rosette casts were completed during the expedition, mostly in conjunction with AUV operations. These casts resulted in 120 water samples collected over a variety of seafloor features and in different water masses which will undergo eDNA analysis in a laboratory after the expedition. Thirteen control samples were also collected. eDNA has the potential to be a valuable and complementary technique to enhance the office’s current repertoire of exploration technologies and methods. Based on what was learned during the expedition, a detailed standard operating procedures document for eDNA collection was developed. (For more information on the potential for eDNA use in NOAA Ocean Exploration operations, including a full eDNA feasibility assessment, see Appendix E of the office’s Exploration Variables memorandum.)

Environmental DNA (eDNA) is the genetic material shed by organisms into their environment. Mission personnel on the 2021 Technology Demonstration tested the use of eDNA analysis as a potential new tool that could one day be incorporated into NOAA Ocean Exploration missions to more comprehensively explore the deep sea. Video courtesy of NOAA Ocean Exploration, 2021 Technology Demonstration. Download MP4 version (mp4, 282 MB).

A total of 9,669 square kilometers (3,733 square miles) of largely unmapped seafloor were mapped using the EM 304 multibeam during overnight mapping operations, most of which filled data gaps in priority areas of the Blake Plateau. During the course of these operations, new seep sites were discovered along the U.S. East Coast. Additionally, in a show of interagency collaboration, mission personnel were also able to respond to a request to map priority targets for Monitor National Marine Sanctuary.

A key aspect of the mission of NOAA Ocean Exploration is sharing the excitement of exploration and discovery with the public through our website, social media, and more. During the 2021 Technology Demonstration, the expedition live feed received nearly 20,000 views, while expedition-specific web content had close to 5,000 visits. Twenty-two news articles helped to tell the story, including stories by Forbes, Space.com, and NASA. In a novel approach for our office, expedition personnel also conducted a live interaction via Twitch, reaching new audiences within the gaming community. And before the expedition began, mission personnel from NOAA Ocean Exploration, NOAA Fisheries, WHOI, and NASA JPL participated in a live interaction in which they discussed the upcoming expedition and goals, and answered questions from the public. The event was livestreamed across multiple social media platforms, and attained a viewership of about 170,000!