Testing the Use of Environmental DNA to Explore the Deep Ocean

During the 2021 Technology Demonstration, we will be collecting water samples to detect environmental DNA, also known as “eDNA,” throughout the water column. eDNA is the genetic material that organisms leave behind in their environment (for example, in sediment or water). By collecting and analyzing this genetic material left behind, species can be identified within an environment without scientists ever having to see them. eDNA has many applications and is widely used at NOAA. It can be used to:

eDNA has the potential to be a valuable technique that NOAA Ocean Exploration can add to its current toolbox of exploration technologies and methods. The deep sea remains a largely unexplored environment, and we still do not fully understand what organisms reside there. NOAA Ocean Exploration currently uses remotely operated vehicles, or ROVs, to collect video data to better understand the organisms that reside on the seafloor and in the water column. However, ROVs alone do not give us a robust look at deep-sea biodiversity because so many species can be missed, such as cryptic species, species that are too small to image with cameras, or species that are difficult to tell apart visually. Beyond imaging, we also use ROVs to collect a limited number of biological samples; eDNA sampling will allow us to detect more species at a far larger scale. Given the challenges of deep-sea exploration and species identification, it is fortunate that advancements in molecular techniques have improved the scope and scale of using eDNA in the deep sea. This technique has been used on several other deep-sea and NOAA Ocean Exploration-affiliated expeditions along the west coast, in the Clarion Clipperton Zone, in the Gulf of Mexico, and along the east coast, specifically the Blake Plateau. 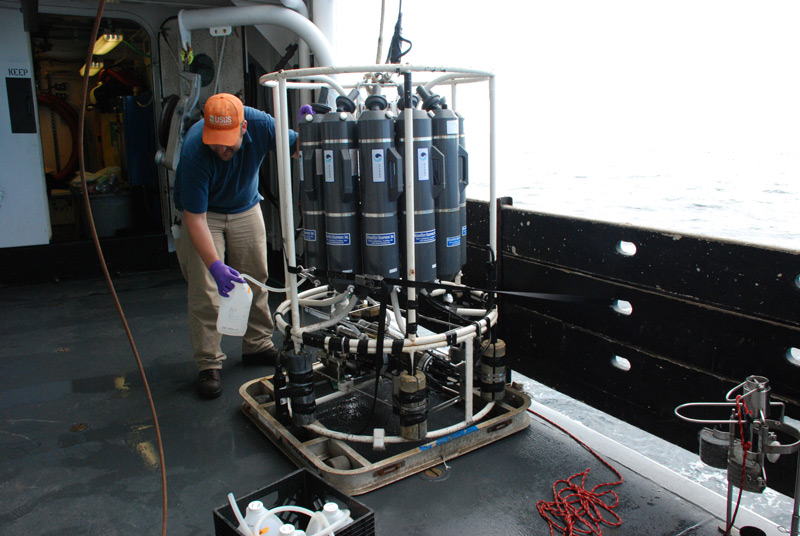 After recovering the CTD, a scientist attached a tube to each Niskin bottle and transferred collected water into plastic jugs where it was taken into the on-ship lab to be filtered for later analysis. Image courtesy of DEEP SEARCH 2017, NOAA-OER/BOEM/USGS. Download image (jpg, 4.4 MB).

eDNA analysis generally has four phases to it. First, environmental samples are collected: in our case, these are water samples. For the 2021 Technology Demonstration, we will collect water samples using the conductivity, temperature, and depth, or CTD rosette system. The CTD rosette is equipped with 12 Niskin bottles. These bottles are open when the rosette is deployed and can be triggered to close and capture water at certain depth intervals. Once the samples are collected, we will process the samples on the ship using a vacuum pump system to pull the water through a filter. By doing this, the DNA in the water (usually in the form of cells left behind by animals) will be captured on the filter, which can then be stored for analysis after the expedition. 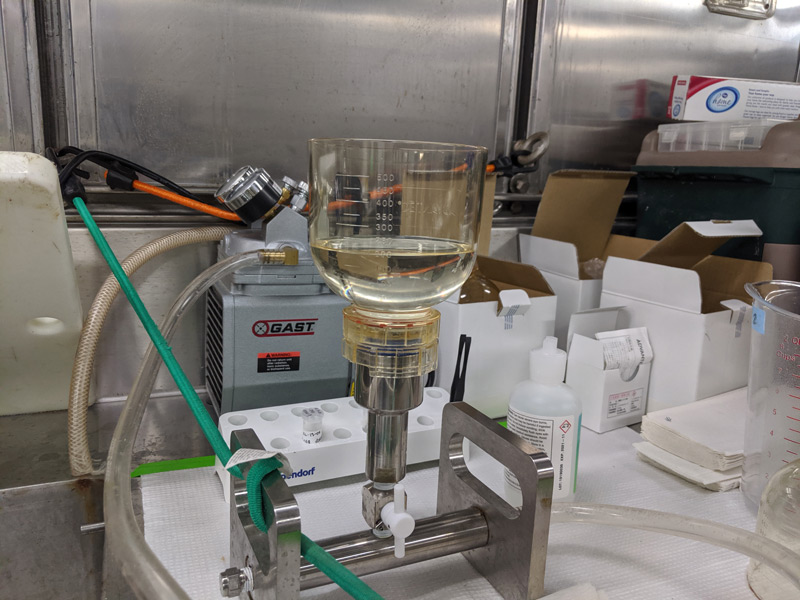 The last three steps of eDNA analysis generally take place in a laboratory setting. This includes the DNA extraction, sequencing, and bioinformatics analysis. During this last phase, we will generate data that will give us a better understanding of the species community composition along the Blake Plateau. After generating these results, NOAA Ocean Exploration will assess how well this technique worked and whether it should become a part of our standard ocean exploration operations going forward.