A tripod fish (Bathypterois grallator) props itself up on the seafloor. This blind ambush predator rests on a modified set of fins, awaiting a meal to pass close enough to catch. Its pectoral fins are tipped with sensitive feelers that extend out in front of the fish and allows it to sense prey nearby. Image courtesy of the NOAA Office of Ocean Exploration and Research, Windows to the Deep 2019. Download larger version (jpg, 1.3 MB).

During leg one of the Windows to the Deep 2019 expedition, scientists on NOAA Ship Okeanos Explorer noticed an interesting temperature and oxygen anomaly over the Central Blake Plateau Scarp. At about 860 meters (2,821 feet), there was a sharp drop in temperature, a decrease in salinity, and an increase in dissolved oxygen. Today, on leg two, the Okeanos Explorer returned to the Central Blake Plateau Scarp to investigate this anomaly with the remotely operated vehicle (ROV) Deep Discoverer (D2). In addition, this site offered geological features of interest to NOAA scientists, namely a large scarp, or very steep rock wall, extending up 120 meters (390 feet).

This was a species described by Chris Mah in 2010, and which was originally collected by Martha Nizinski, a NOAA National Marine Fisheries Service biologist who works on coral and their related faunas. The description was based on three museum specimens. Prior to Dive 08 of the Windows to the Deep 2019 expedition, Chris had never seen it alive.

This species was hypothesized to be a coral predator when Chris described it, based on fragments found in its gut, but now we have solid evidence of this species feeding on a primnoid octocoral! This was the FIRST time it’s been seen alive! Video courtesy of the NOAA Office of Ocean Exploration and Research, Windows to the Deep 2019. Download larger version (mp4, 82.4 MB).

The ROV reached the seafloor at a depth of about 1 kilometer (0.62 miles) and began transiting towards the scarp. Along the way, the ROV team encountered a field of rocky rubble consisting of small, round stones that increased in size and became more irregular in shape closer to the scarp feature. One of these rocks was collected and brought to the surface for further analysis. As the ROV moved up the scarp, coral and coral rubble became more common. An interesting nemertean worm specimen was collected among the coral thanks to the ROV’s newly outfitted suction sampler. These fascinating creatures look a great deal like true worms (phylum Annelida), but actually exist in their own phylum. They are typically predatory, going after small fish and invertebrates. We also had a rare sighting of a paper nautilus egg case.

The robotic arm on the remotely operated vehicle Deep Discoverer grabs one of the many pieces of stone rubble near the scarp. This stone likely fell from the scarp feature and was transported and eroded by currents, but further study back on the surface will tell us more about its history and the area in general. Image courtesy of the NOAA Office of Ocean Exploration and Research, Windows to the Deep 2019. Download larger version (jpg, 1.6 MB). 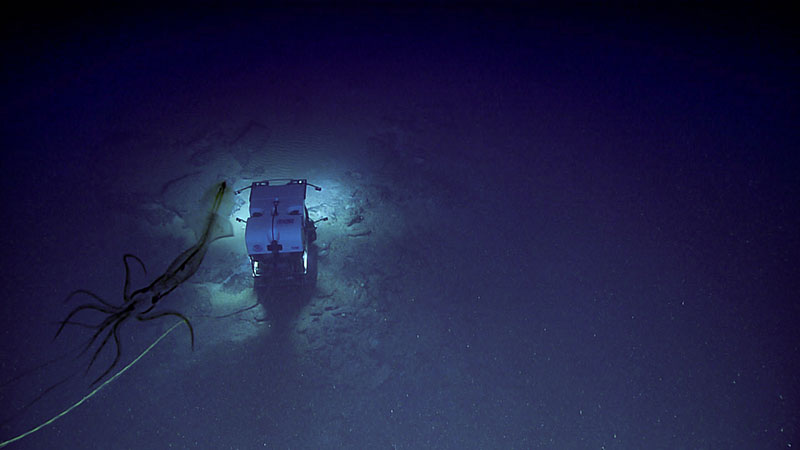 Above the scarp feature, the seafloor plateaued at about 865 meters (2,838 meters). At this point, we encountered the anomaly noted on the previous leg of the expedition. D2 gave us readings of very low temperature and very high oxygen, while Seirios (the camera sled that is the second part of the two-bodied ROV system) gave significantly higher temperature readings and lower oxygen levels only 15 meters (50 feet) above Deep Discoverer. This points to a very rapid change in the water column occurring at this depth. The explanation for such a drastic difference comes from the physical properties of water at different temperatures. Cold water is much denser than warm water and is also better at retaining oxygen. The cooler, denser water sinks to the seafloor, while warmer water remains above it. If there is a stable water column without much mixing or current, these masses of water can form distinct layers with very different properties.

Once we’d explored the plateau and documented the temperature anomaly, the ROVs ascended into the water column to do the third set of midwater transects for this expedition. The ROV spent 15 minutes at 700 meters (2,297 feet) and 840 meters (2,756 feet) to get a sense of the midwater fauna that inhabited the region. We were especially interested in the midwater life of this site considering its interesting geology and the temperature anomaly documented earlier. During the water column transects, a transparent squid, likely a member of the Cranchiid family, and a lobate Ctenophore were collected with the suction sampler and brought aboard for further analysis.

A colorful jelly extends its tentacles to feed in the water column during our midwater transects. Image courtesy of the NOAA Office of Ocean Exploration and Research, Windows to the Deep 2019. Download larger version (jpg, 614 KB).

This dive gave us the opportunity to explore a feature quite unlike anything we’ve seen yet on this expedition. Features like the Central Blake Plateau Scarp give scientists the chance to compare how deep-sea organisms adapt to different conditions and terrains. It also provides critical information about the geologic history of these areas. Further study of data collected on this dive may also illuminate how and why the temperature anomaly that we observed occurs, how it impacts sea life, and its possible connection to the seafloor topography. 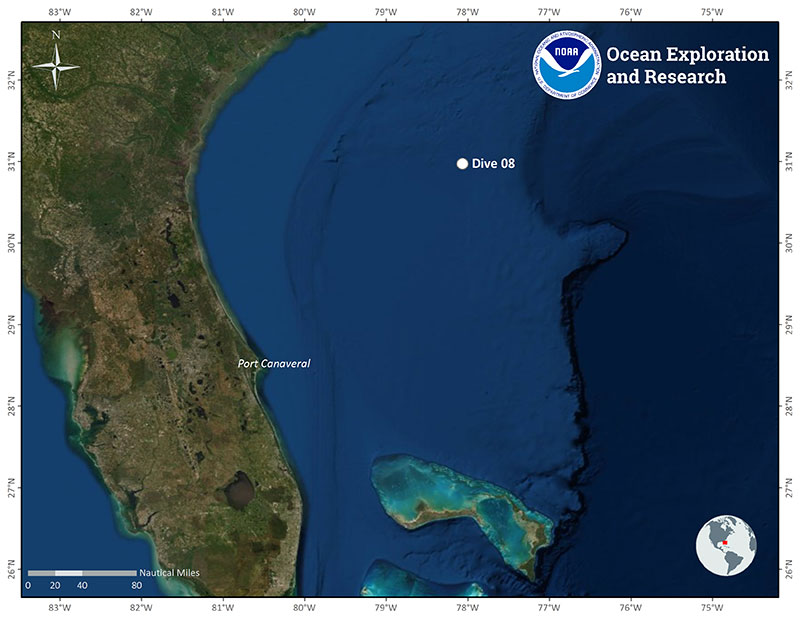 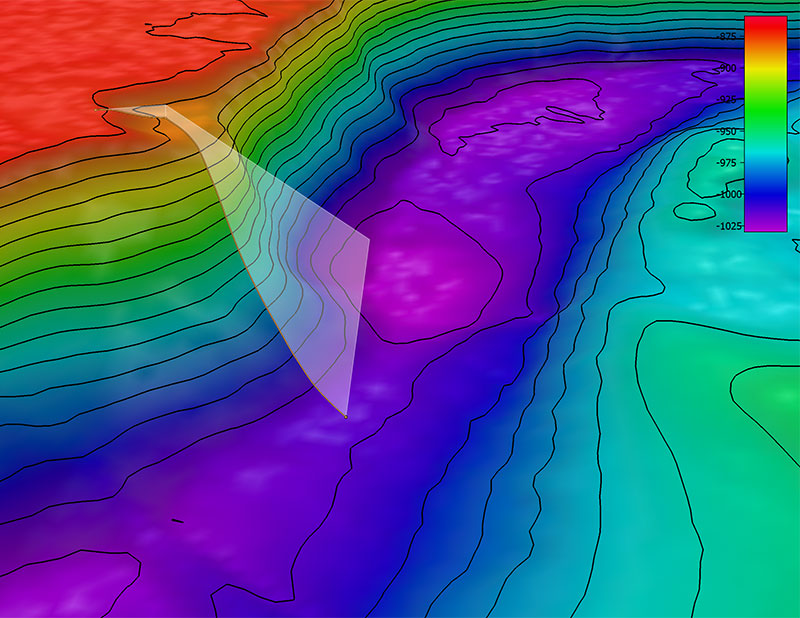