The Importance of Exploring the Sargasso Sea: ‘Spiritual and Aesthetic Delight’ as Well as Conservation 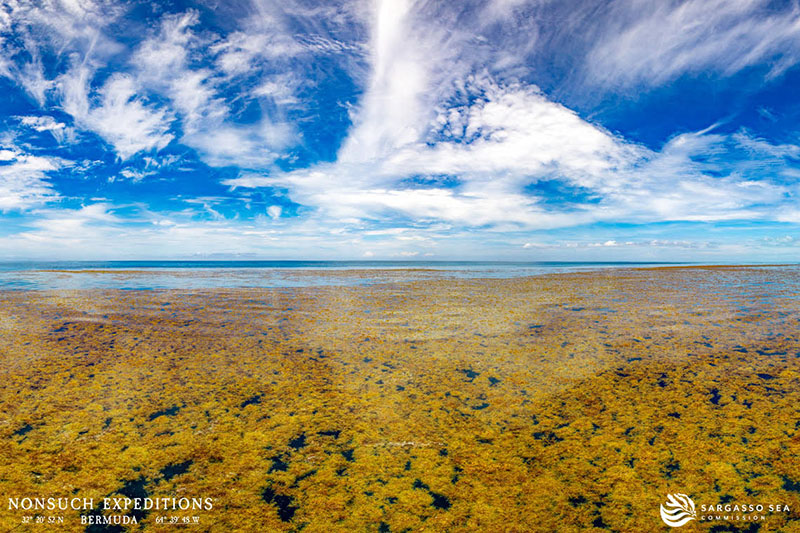 Sargassum is a genus of large brown seaweed (a type of algae) that floats in island-like masses. These floating rafts can stretch for miles across the ocean, serving as habitat that provides food, refuge, and breeding grounds for an array of animals such as fishes, sea turtles, marine birds, crabs, shrimp, and more. Image courtesy of Jean-Pierre Rouja for the Nonsuch Expeditions. Download largest version (jpg, 715 KB).

The Sargasso Sea is a distinctive ecosystem located on the high seas. Its boundaries are defined by currents circulating the North Atlantic sub-tropical gyre, including the Gulf Stream and the Antilles Current. The Sargasso Sea is named for the floating sargassum that populates its surface – a kind of macroalgae that is designed for a pelagic (open ocean) existence, never attaching to the bottom at any point in its life cycle. Sargassum has been called a ‘golden floating rainforest’ by former Chief Scientist of NOAA Sylvia Earle, as it provides the foundation for a highly biodiverse habitat in the open ocean.

Sargassum acts as a nursery for many juvenile-stage fish of great economic value and global significance, including dolphinfish, jacks, mackerel, wahoo, tuna, and billfish. Several species of endangered turtles also develop in the sargassum. The Sargasso Sea provides invaluable spawning habitat for endangered anguillid eels and is a pupping location for the endangered Porbeagle shark. The Sargasso Sea also acts as a migratory corridor for various species of sharks, rays, whales, and dolphins.

The high seas account for approximately half of the world’s ocean. These waters, beyond the national jurisdiction of any country, are some of least protected and most important in the world. The Sargasso Sea Commission is committed to fulfilling a stewardship role for this distinctive area of the ocean. 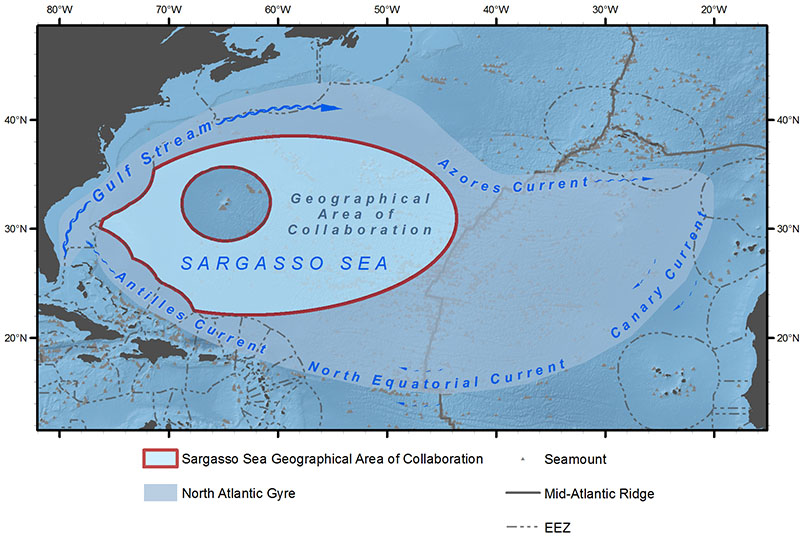 The Sargasso Sea, located entirely within the Atlantic Ocean, is the only sea without a land boundary, being instead defined by currents. Image courtesy of the Sargasso Sea Commission. Download largest version (jpg, 1.4 MB).

Deep-sea animals were first observed in their natural environment in a series of dives conducted in the Sargasso Sea off of Bermuda. William Beebe conducted the dives from 1930-1934 in his bathysphere, an unpowered, steel submersible designed to be lowered down on a cable, which was the invention of his partner, Otis Barton. The bathysphere was designed as a sphere in order to best withstand incredible deep-sea pressures. Crucially, it also allowed for a window, made from three-inch-thick fused quartz, to see out into the depths. 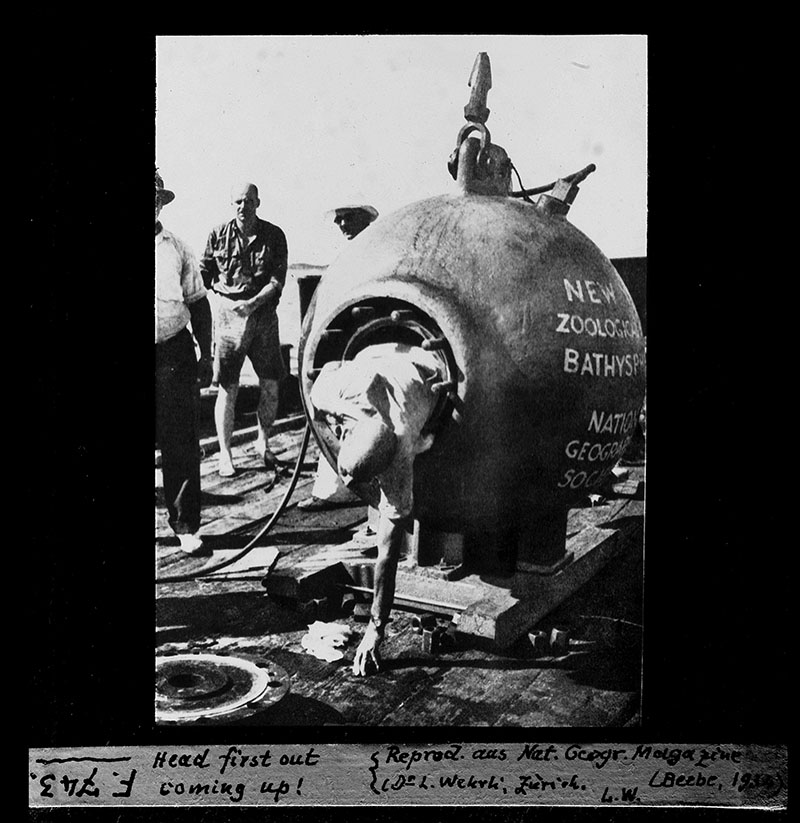 The bathysphere was lit from within and installed with a telephone cable so that Beebe and Barton could communicate with the surface. Standing by at the other end of the telephone line was Gloria Hollister Anable, who transcribed Beebe’s observations in real time. A 2021 National Geographic article  reports:

On the afternoon of June 19, 1930, [Anable] transcribed Beebe’s report from a depth of 800 feet: “Little twinkling lights in the distance all the time, pale greenish in color. Eels, 1 dark and 1 light. Big Argyropelecus coming; looks like a worm head on.”

These observations were relayed to Else Bostelmann, an artist, who would go on to produce paintings of deep-sea creatures from Beebe’s observations. In the introduction to his book about the bathysphere voyages, Half Mile Down, Beebe shares a quote about the fact that, while the chief aim of science is to solve problems, “we should realise, like the amateur, that the organic world is also an inexhaustible source of spiritual and esthetic delight.” 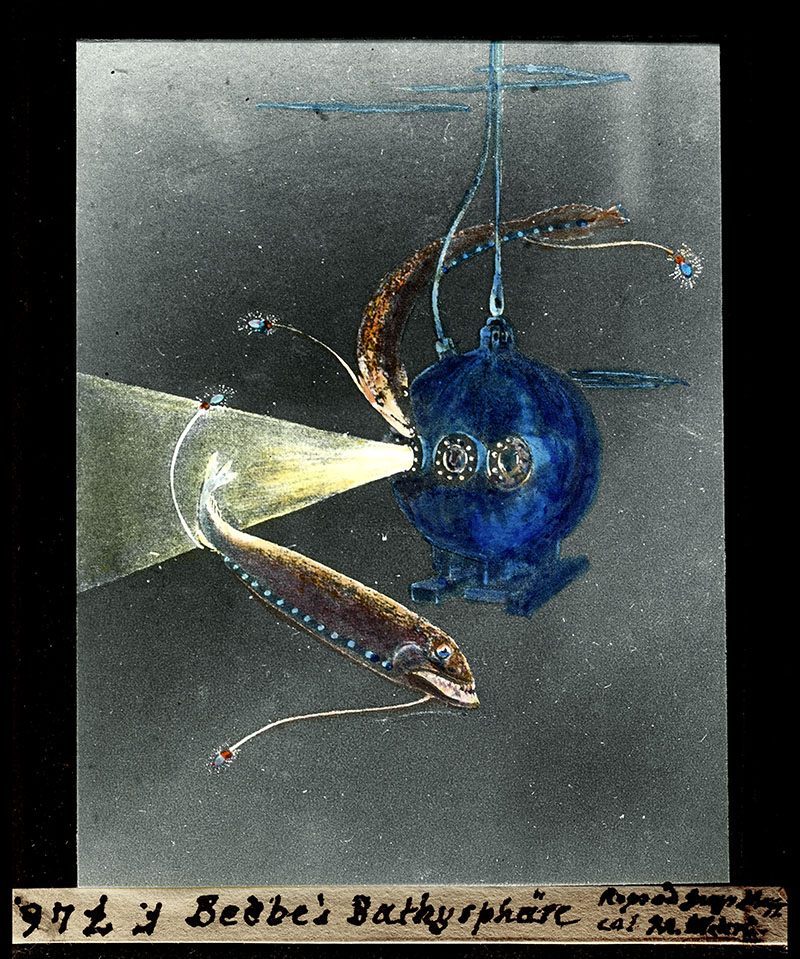 Even before Beebe’s voyages, The Sargasso Sea captivated ocean explorers. The sea was likely named by Portuguese sailors in the 1400s, who compared the floating seaweed, with its gas-filled vesicles, to grapes. Its first written record is found in Christopher Columbus’ journals; the sailors associated seaweed and the crabs upon it with shallow water, and so they feared their ship running aground. Today, the Bermuda Institute of Ocean Sciences maintains one of the longest-running time series in the world for oceanographic data in the Sargasso Sea off Bermuda.

The two species of macroalgae that populate the Sargasso Sea, Sargassum natans and Sargassum fluitans, are holopelagic - meaning that they never attach to the ground throughout their entire life cycles, and are specialised to lead a pelagic existence. Due to the Sargasso Sea’s high primary productivity, it plays an important role in carbon sequestration, both by the sinking of sargassum algae to the deep sea and through the activities of ocean microbes that recycle carbon in a process known as the microbial loop. 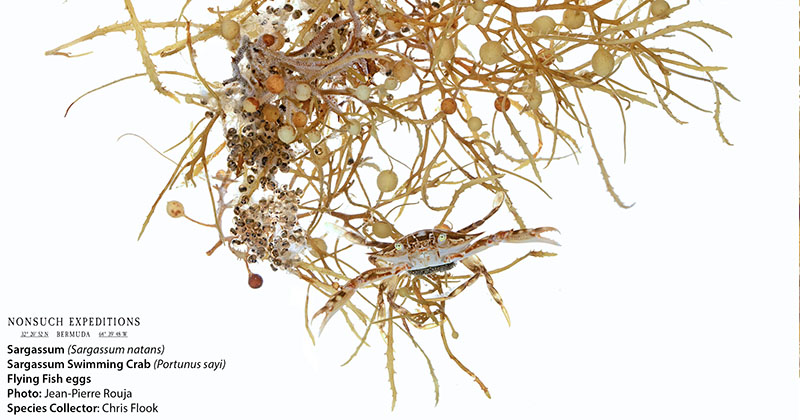 While the ecological importance of the Sargasso Sea is already recognized by the Parties to the Convention on Biological Diversity as an Ecologically or Biologically Significant Marine Area (EBSA) due to the work of the Sargasso Sea Commission, more exploration and research is needed to further our understanding of this distinctive area of the ocean.

Seabed mapping is a foundational aspect of oceanic knowledge, and the work being conducted during the 2021 North Atlantic Stepping Stones expedition will provide important insight into various seamounts found within the Sargasso Sea. This expedition, and the knowledge obtained during the voyage, has the power to increase understanding of the Sargasso Sea and to inform approaches to protecting it.