Geological History of the New England and Corner Rise Seamounts 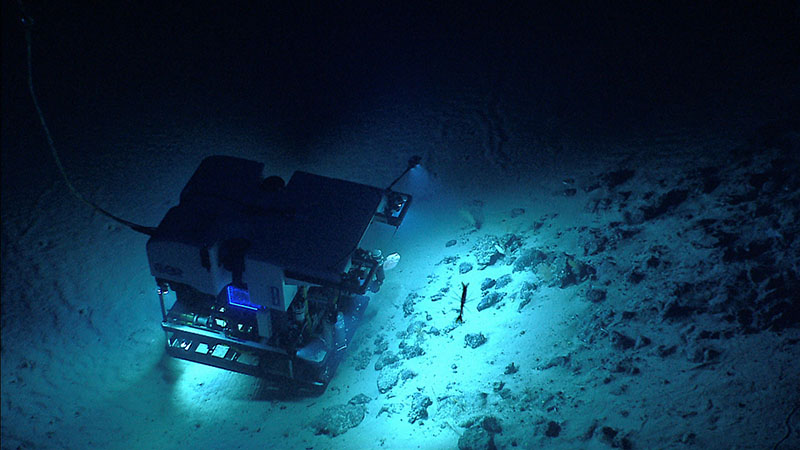 Across the world’s ocean basins, tens of thousands underwater volcanoes, or “seamounts,” rise from the seafloor. Sometimes these seamounts are isolated from each other, but more often, they are found in clusters or chains that stretch across an ocean basin for hundreds of miles. Perhaps the best known of these is the Hawaiian Islands - Emperor Seamount Chain that stretches over 6,000 kilometers (3,730 miles) in the Pacific Ocean. There are also seamount chains in the Atlantic Ocean, including the New England and Corner Rise seamounts.

The New England and Corner Rise seamount chains comprise a line of extinct submarine volcanoes that extend from near the Mid-Atlantic Ridge to the eastern continental margin of the United States. The chains were formed millions of years ago as tectonic plates moved across a relatively stationary “hot spot” plume of magma, rising deep from the Earth’s mantle to the surface. As the plume approached and penetrated the plates, it formed magma that erupted at the surface as a volcano. With continued movement of the plate over the hot spot plume, over millions of years, a line of seafloor volcanoes formed. This line of volcanoes records the direction that the tectonic plate was moving over geologic time. 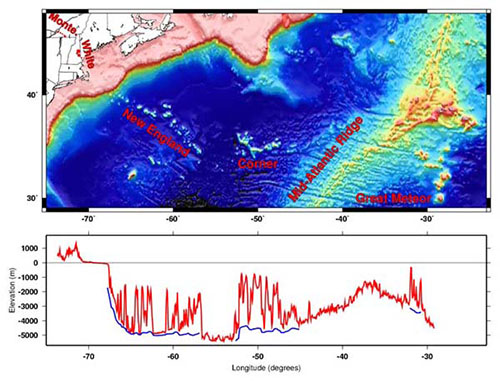 Map of the entire track of the hotspot that formed the New England Seamounts and other associated volcanoes, from the Monteregian Hills (red dots) in the west to Great Meteor Seamount in the east.

The bottom graph shows in red the height of the land and depth of the seafloor along the hotspot track. Blue lines show the seafloor depths surrounding the seamounts to emphasize how high the volcanoes rise above their surroundings. Image courtesy of Daniel Scheirer, U.S. Geological Survey, based on data from Smith and Sandwell (1997, Science). Download largest version (jpg, 1.4 MB).

Comprising more than 30 submarine volcanic peaks and stretching nearly 1,200 kilometers (745 miles), the New England Seamount chain is the longest in the North Atlantic Ocean. These seamounts are the middle portion of the long-distance and long-lived Great Meteor or New England hotspot track, which extends from Canada to undersea volcanoes on the African tectonic plate and is responsible for the formation of both the New England seamount chain and the magma intrusions of the White Mountains.

Bear Seamount, the oldest seamount within the New England chain and the closest to the U.S. east coast, formed about 100 to 103 million years ago. Moving southeast along the chain, the seamounts get progressively younger, with the Nashville Seamount being about 83 million years old. Finally, 80 million years ago, the Mid-Atlantic Ridge migrated to the west over the plume. The track of this hot spot then continues on the African Plate and is found today at the Great Meteor Seamount. 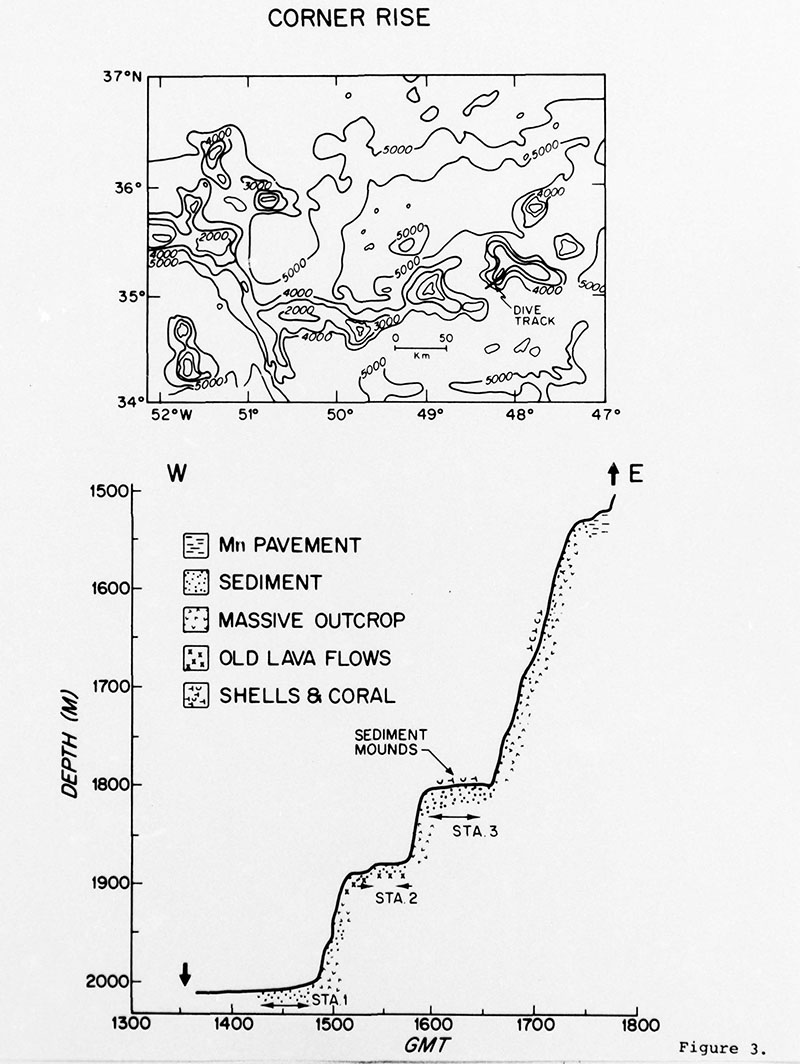 During the summer of 1974, scientists from the Woods Hole Oceanographic Institution conducted a dive using human occupied vehicle Alvin on one of the Corner Rise Seamounts. The top graphic shows the location of the dive track, with contours in meters and a 50-kilometer distance measure shown. The bottom graphic displays information about topography and rocks and sediments observed on the seafloor, shown as depth versus time. Despite the fact that the dive took place decades ago, collected data remains the most recent available. Image courtesy of Woods Hole Oceanographic Institution. Download largest version (jpg, 1 MB).

The Corner Rise Seamounts, formed over the Great Meteor hotspot around 75 millions ago, but are offset approximately 400 kilometers (250 miles) to the east of the New England Seamount chain and are misaligned with respect to the trend of the New England Seamounts. The volcanoes of the Corner Rise chain form longer ridges with more prominent topographic ”saddles” than the more flat-topped and conically shaped New England Seamounts. The reasons for these differences remain unanswered due to insufficient data, but may be explained by differences in the age or structure of the crust on which they were emplaced.

The Great Meteor Seamount group formed 10-20 million years ago on the eastern side of the Mid-Atlantic Ridge spreading center, on the African tectonic plate. This group of seamounts are the largest and youngest volcanoes of all of the seamounts that were formed by the hotspot. 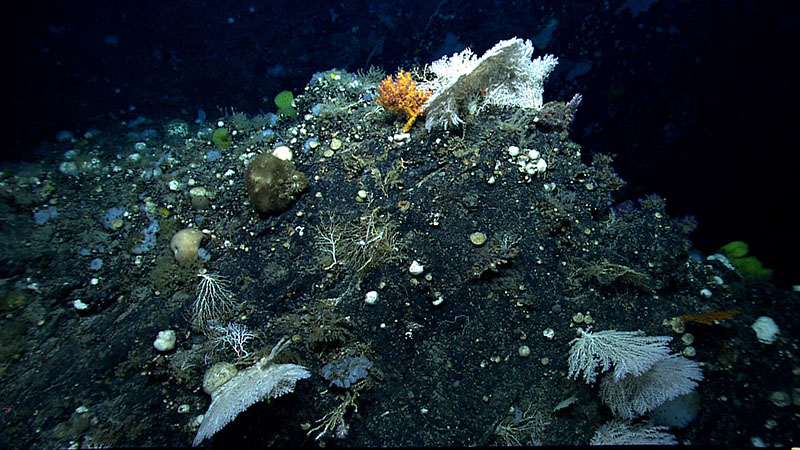 While exploring Gosnold Seamount in 2014, we encountered a high diversity of deep-sea corals and sponges, such as those shown here on a steep outcrop during our transit upslope. In addition to their interesting geological features, seamounts are also important because they harbor more marine life than the surrounding seafloor, often becoming isolated oases of life. Image courtesy of NOAA Ocean Exploration, Our Deepwater Backyard: Exploring Atlantic Canyons & Seamounts. Download largest version (jpg, 1.5 MB).

The once active, but now extinct and submerged volcanoes within the chains rise from 500 meters to several kilometers above the surrounding seafloor. Observations from previous dives on seamounts in the New England chain suggest that many of these volcanoes once broke at or near the surface of the ocean. Submarine landslides, ocean currents, and accumulation of sediments over millions of years have altered the shape of many of them. Exposure of basalt and other hard substrate to mineral-laden seawater and favorable ocean chemistry over millions of years have led to the formation of ferromanganese crusts; these crusts are rich with critical commodities like manganese, copper, and cobalt that are widely used in modern technologies.

The geological exploration of these seamounts that we will conduct during the 2021 North Atlantic Stepping Stones expedition, through mapping, visual surveys, and collection of samples, offers an opportunity to learn more about the geology of the seamount chains, including hotspot volcanism; plate tectonics; seamount geomorphology, age, and evolution; submarine landslide and seamount erosion processes; deep-ocean sediment transport; and ferromanganese crust accretion in an area where sparse or no data currently exist to answer these questions.