Video courtesy of the NOAA Office of Ocean Exploration and Research, Windows to the Deep 2019. Download larger version (mp4, 111.9 MB).

On the final remotely operated vehicle (ROV) dive of Windows to the Deep 2019, NOAA Ship Okeanos Explorer’s 100th ocean exploration mission, the ROV Deep Discoverer (D2) explored the seafloor around recently discovered methane plumes near the well-studied Norfolk Seeps, the location where the U.S. Atlantic seeps story first began in 2012. This was a fitting location to conclude the Windows in the Deep 2019 expedition as the NOAA Office of Ocean Exploration and Research (OER) celebrates its 10th year of ocean exploration.

In November 2012, the Okeanos Explorer mapping team was working south of Norfolk Canyon when their multibeam sonar survey revealed the first evidence of widespread seafloor methane seepage on the northern U.S. Atlantic margin. Through a collaboration between OER and the U.S. Geological Survey (USGS), this initial discovery led to the subsequent identification of over 570 seafloor methane seep sites using 94,000 square kilometers (58,409 square miles) of Okeanos Explorer sonar data collected between Cape Hatteras and Cape Cod.

Since then, NOAA, USGS, the National Science Foundation, the Bureau of Ocean Energy Management, the U.S. Department of Energy, and private foundations have sponsored exploration of the seafloor and water column in the Norfolk Seeps area and other Atlantic margin seeps sites. These studies have used ROVs, Deep Submergence Vehicle (DSV) Alvin, and autonomous vehicles and have involved the deployment of numerous imaging and sampling technologies to investigate the unique ecology, geochemistry, oceanography, and geophysics in seep environments and to study methane and gas hydrate dynamics. 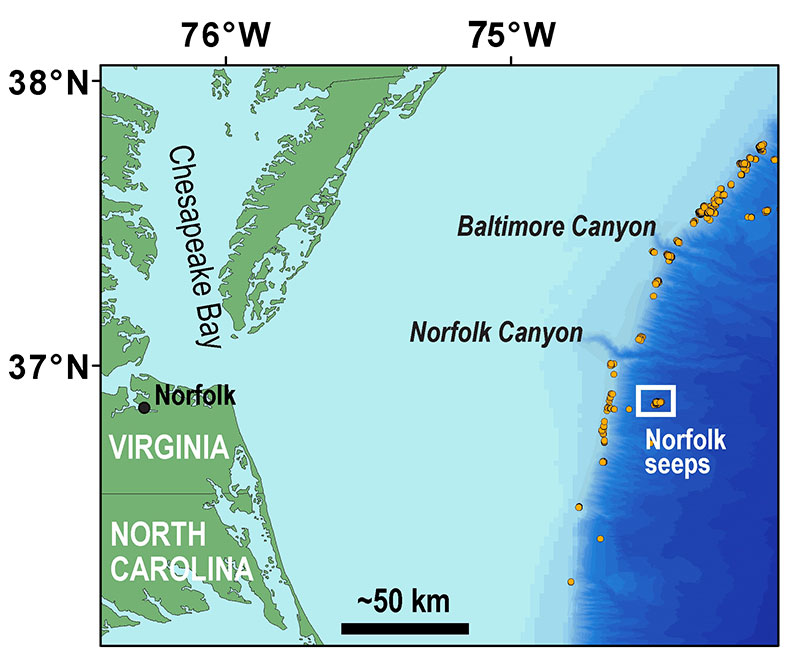 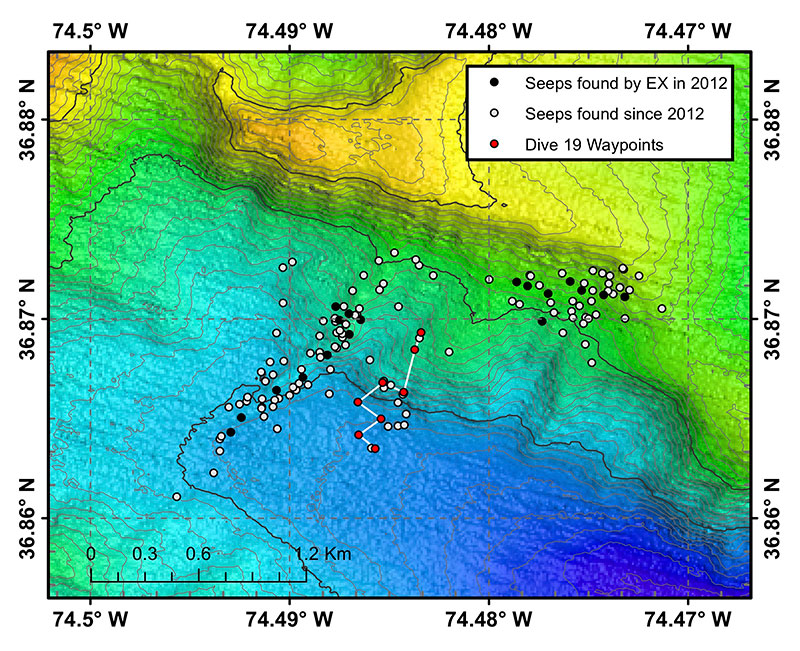 The methane plumes at the Norfolk Seeps were identified through the multibeam data collection and processing efforts of the OER mapping team, as well as through dedicated data analysis by NOAA Hollings Undergraduate Scholar Mali’o Kodis and Mississippi State University undergraduate student Maleen Kidiwela. The specific methane plume targets explored in today’s dive (Dive 19 of the expedition) were originally identified from 2014 Okeanos Explorer mapping data by Kidiwela and supplemented by seep detections made during overnight mapping the day before the dive.

Dive 19 proceeded from a depth of approximately 1,625 meters (1 mile) upslope to about 1,530 meters (0.95 miles) through a cluster of methane plumes mapped on the south side of a pronounced ridge. The dive track was positioned between seeps arrayed along two lines situated about 500 meters (0.3 miles) to the northwest and about 1,000 meters (0.6 miles) to the northeast. Those areas have been previously explored on at least five dives with underwater vehicles and had been found to have effusive gas discharge, robust chemosynthetic ecosystems, extensive beds of Bathymodiolus childressi mussels, abundant carbonate rock, and ubiquitous bacterial mats. In addition, a second, much larger type of mussel (Bathymodiolus heckerae) have been collected at the seeps, the first such occurrence of this species so far north on the U.S. Atlantic margin.

As D2 approached the seafloor, it imaged a flat mud bottom with aggregated sediment clumps, which were observed during most of Dive 19. Various fish and shrimp were observed as the ROV continued towards the first waypoint. D2 transited upslope, encountering scattered Bathymodiolus mussel shells that indicated the proximity of chemosynthetic benthic habitat. In this part of the dive, coral (Umbellula), brittle stars (Ophiuroidea), and an octopus (Muusoctopus) were also observed. 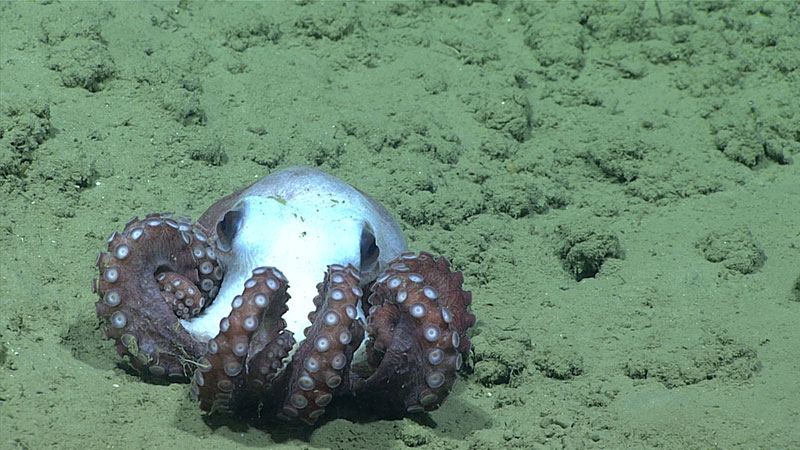 Muusoctopus on soft bottom seafloor observed at about 1,600 meters (5,250 feet) water depth on Dive 19. Octopus body is about 16 centimeters (5.2 inches) across. Image courtesy of the NOAA Office of Ocean Exploration and Research, Windows to the Deep 2019. Download larger version (jpg, 1.2 MB). 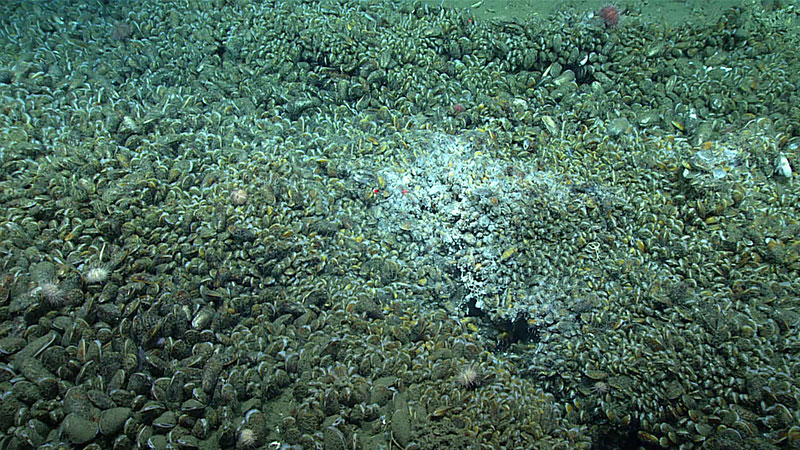 Although no active gas bubbling was observed during Dive 19, the dense patches of live Bathymodiolus childressi mussels and associated bacterial mats are indicators of fluid seepage. Such ecosystems rely on methane or hydrogen sulfide produced during the bacterial breakdown of methane for their metabolic processes, meaning that an active methane system must be present below the seafloor. Red laser dots are separated by 10 centimeters (3.94 inches). Image courtesy of the NOAA Office of Ocean Exploration and Research, Windows to the Deep 2019. Download larger version (jpg, 960 KB).

As the dive continued, the team observed an increasing density of empty Bathymodiolus mussel shells, and the scene then transitioned to beds of live Bathymodiolus childressi adjacent to outcrops of authigenic carbonate rocks. Dense bacterial mats and distributed echinoderms and anemones were also seen, as well as rays, fish, and crabs. As D2 progressed along its track, authigenic carbonate rock outcrops grew larger, with dipping slabs of rock protruding from the seafloor. Live and dead Bathymodiolus childressi were intermittently observed near rock outcrops, and large mussels were imaged with the ROV’s laser measuring activated to allow scientists to determine if these are Bathymodiolus heckerae.

No active gas bubble streams were observed during Dive 19. However fluid seepage was first imaged approximately midway through the dive, with fluids emerging from a rounded mound whose morphology was similar to features that are cored by gas hydrate on the floor of the Gulf of Mexico and offshore the U.S. Pacific margin. The surface of the mound was covered in lighter sediment than the surrounding seafloor and some holes in the mound were observed to be discharging sediment-laden fluid. The fluid did not rise into the water column, instead it appeared to be denser than the surrounding seawater and flowing downslope. Briny fluids leaking from the seafloor in the Gulf of Mexico have been observed to sink in a similar way, although flows there are at a much larger scale than observed on Dive 19 at the Norfolk Seeps. Several similar, but smaller, low relief mounds were encountered through the remainder of the dive, but only some of these mounds displayed fluid discharge. 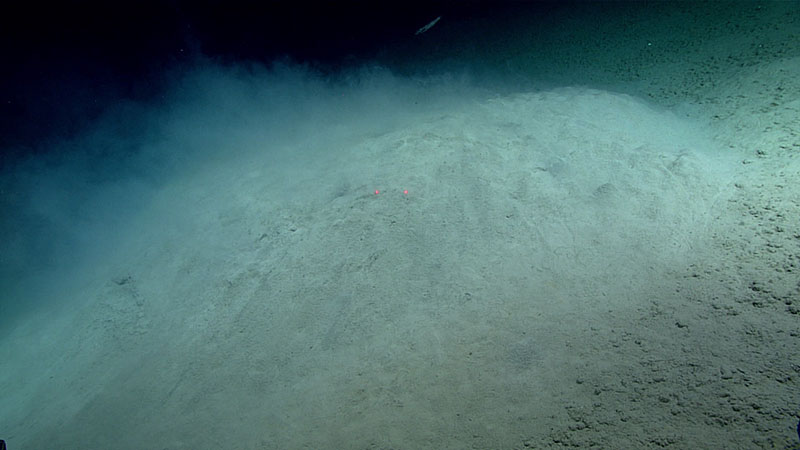 This low relief mound, several meters across, may be underlain by methane hydrate. Fluid that was denser than seawater flowed out of holes in the surface of the mound, entraining fine sediment that then billowed into the water column, as seen here. Red laser dots are separated by 10 centimeters (3.94 inches). Image courtesy of the NOAA Office of Ocean Exploration and Research, Windows to the Deep 2019. Download larger version (jpg, 892 KB). 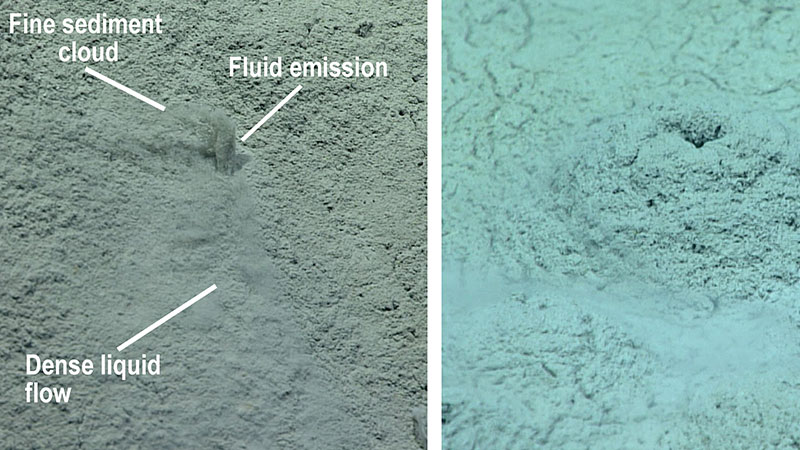 (Left) Fluid was observed shooting straight up a few centimeters from small holes (about one centimeter across) on top of the low relief mounds. The denser liquid component of the fluid effluent flowed downhill, while fine sediment entrained in the emission billowed into the water column. (Right) In some places, the fluid flowing from the top of the low relief mounds has built sediment features a few centimeters high around the holes. Image courtesy of the NOAA Office of Ocean Exploration and Research, Windows to the Deep 2019. Download larger version (jpg, 5.6 MB).