Though a shipwreck was not found during Dive 07 of the Windows to the Deep 2019 expedition, the site contained several rocky outcrops that hosted a variety of sponges, coral, fish, and other invertebrates. Seen here is an alfonsino fish taking refuge under one of the ledges. Image courtesy of the NOAA Office of Ocean Exploration and Research, Windows to the Deep 2019. Download larger version (jpg, 1.3 MB).

Our seventh dive of the Windows to the Deep 2019 expedition took place approximately 80 miles off the coast of South Carolina at a potential Underwater Cultural Heritage site that was thought to be the Bloody Marsh shipwreck based on the location and size observed in the high-resolution mapping data.

The remotely operated vehicle (ROV) Deep Discoverer landed approximately 200 meters (656 feet) to the south of the potential wreck site to approach slowly, from a safe distance. Along the transit to the target, we observed abundant and diverse sponges, octocorals, stony corals of the family hydrozoa (Stylasteridae), and numerous black rock outcrops thought to be manganese iron oxide crust. The ROV reached the target and surveyed the surrounding area, but it was determined that the location was, unfortunately, not a shipwreck site.

However, given the unique set up of our operations and our ability to leverage telepresence technology, we were able to switch the primary objectives of the dive to benthic animal characterization. In a matter of minutes, our science team contingent switched from mainly archaeologists to benthic biologists and geologists who were eager to explore this dense and diverse coral and spong community. The rocky outcrops encountered hosted an abundance of sponges, corals, fish, and more. We collected one geologic sample (rock) and three biological samples (two sponges and one coral). One of the corals collected was a stony coral of the family hydrozoa (Stylasteridae). The science team noted that this species of coral has yet to be seen on any of the dives so far.

Towards the end of the Dive 07, after searching for a potential shipwreck target approximately 80 miles off the coast of South Carolina and instead finding a series of rocky outcrops, the Windows to the Deep 2019 expedition team had a rare encounter – a group of sharks in what looked to be a feeding frenzy appeared in the dim reaches of remotely operated vehicle Deep Discoverer's lights. Upon closer approach, the lights revealed a dead swordfish, approximately 2.5 meters (8 feet) in length, lying on the seafloor with at least 11 sharks circling and feeding “vigorously” on the swordfish's skin and muscle tissue. Read about the encounter further in this mission log. Video courtesy of the NOAA Office of Ocean Exploration and Research, Windows to the Deep 2019. Download larger version (mp4, 145.7 MB). 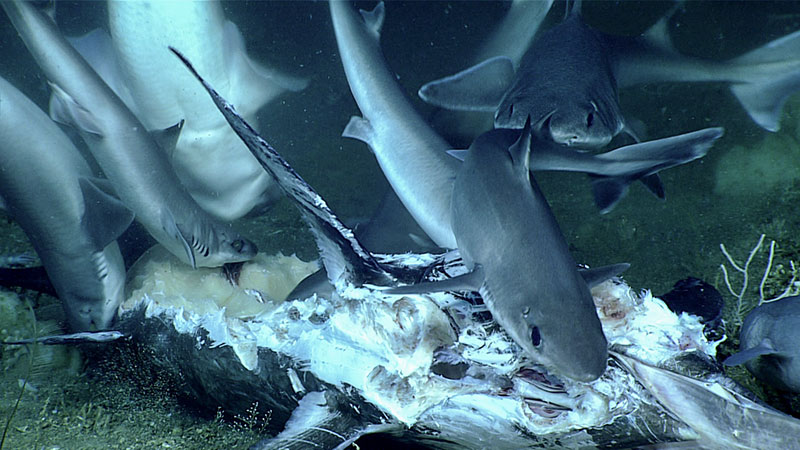 The science team noticed a number of sharks towards the end of the dive and came upon a group of them feeding on a billfish that looked like it hadn’t been on the seafloor for too long. Image courtesy of the NOAA Office of Ocean Exploration and Research, Windows to the Deep 2019. Download larger version (jpg, 1.4 MB). 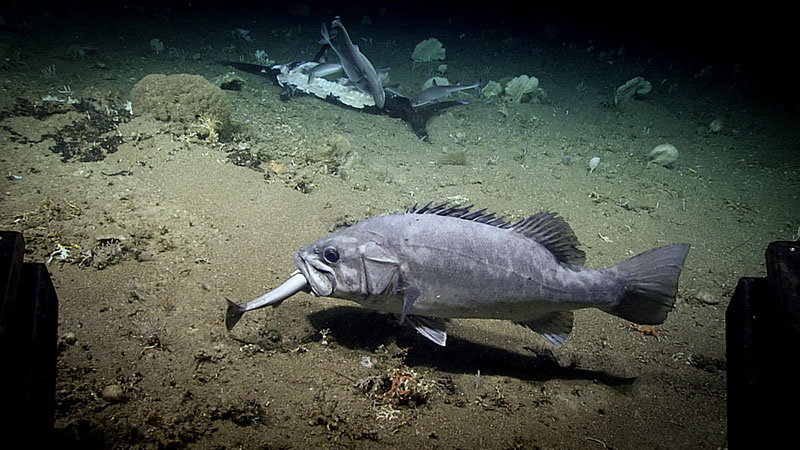 The most exciting part of the dive came during the last 45 minutes, when the ROVs came upon what many of our science team have called a once in a lifetime event. Throughout the dive, several small sharks, potentially dogfish, were observed; while this was a notable observation, the team didn’t expect what they would find at the top of the ridge – an aggregation of sharks devouring a recently (likely within 30 minutes of our arrival) dead swordfish. As the scene unfolded, more sharks gathered and continued to feed upon the swordfish fall. The fall also attracted many crabs, eels, and other fish. While we watched, a large wreckfish caught and swallowed whole one of the sharks as it approached the swordfish. Beyond witnessing an incredible predation event, our team remarked on how instances like this are good examples of how shallow waters and the water column are connected to the deep sea. When megafauna animals like the swordfish or whales die, they become an important food source for scavengers that live in the deep water below. 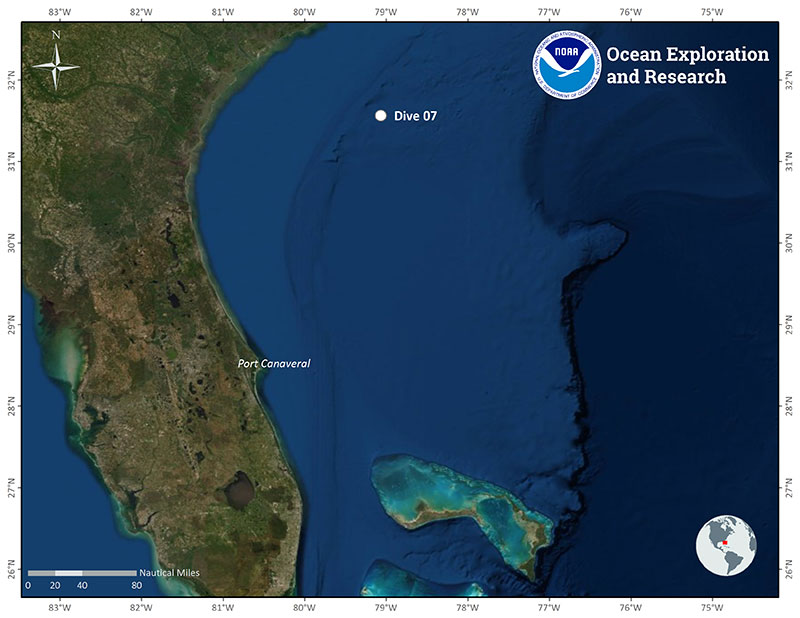 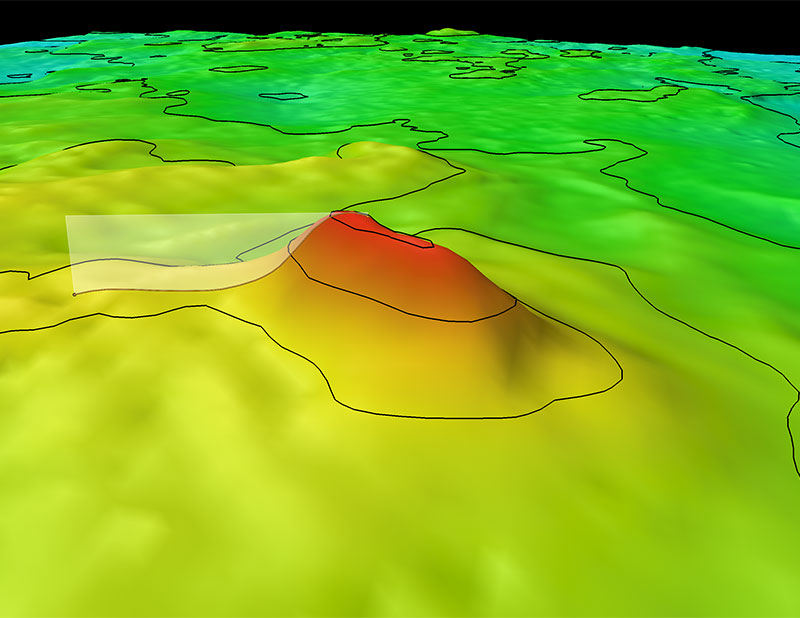