New and Rare Stars In the Abyss of Puerto Rico

Laetmaster spectabilis. We saw this species of deep-sea sun star in Puerto Rican waters during the 2015 Océano Profundo expedition at a whopping 3,915 meters (2.4 miles). The last time this species was seen was when it was first collected via trawl net in 1878 by the oceanographic research vessel USS Blake. It basically gave the 20th Century a hard pass! Image courtesy of the NOAA Office of Ocean Exploration and Research, Océano Profundo 2015: Exploring Puerto Rico’s Seamounts, Trenches, and Troughs. Download image (jpg, 1.6 MB).

DISCOVERIES! That’s one of the awesome things about exploration, and NOAA Ship Okeanos Explorer helps us go to some of the most distant and unknown places in our ocean.

I work on sea star diversity and evolution. In other words, how many different kinds of sea stars are there? Where do they live? What is important about them? How do they fit into known ecological and evolutionary patterns?

In the same way that you want all the pieces of a jigsaw puzzle before you begin, scientists also try to make sure we have as much information about as many of the known species relevant to a certain idea or study before we begin formulating hypotheses or ideas. Hence we have the field known as taxonomy, which seeks to identify known species and to describe unknown or new species.

Although sea stars are very familiar to many people, there is still much we do not know or understand about them. Sea stars and their relatives live exclusively in the ocean and most of the ocean, especially the deep-sea, remains completely unexplored.

New unnamed species (Family Goniasteridae). The Goniasteridae are the most diverse sea stars known within the Asteroidea with some 260 species in 56 genera with many more still being discovered. Goniasterids occur primarily in deep-sea habitats across a wide range from 200 to 2,000 meters (656 to 6,562 feet).

This species is similar to one we observed in the Pacific during the Okeanos Explorer CAPSTONE expeditions (2015-2017). But until we can examine it, there remains some question as to whether it is exactly the same or a separate, new species!

Parts of the ocean at depths greater than 1,000 meters (3,280 feet) are especially unknown, and this also applies to sea stars. Thanks to the transmission of the live video feed from NOAA Ship Okeanos Explorer’s remotely operated vehicles, not only are we able to visit these areas, but we’re able to observe these species in their natural habitats and even collect samples if they have the potential to lead to new discoveries.

New species are important to science. Some might represent new predators and thus important members of deep-sea ecosystems. Others might resemble ancient species and have huge relevance to our understanding of evolution in deep-sea settings. Others still might generate useful medicines or inspiration for technology. The potential for discoveries from every new species discovered from the abyss is vast.

This mission log features five rarely seen or in some cases undescribed (i.e., new) species that we have come across during Okeanos Explorer expeditions. Four of these were observations made during the 2015 and 2018 Océano Profundo expeditions to explore deep-sea habitats off Puerto Rico and the U.S. Virgin Islands.

The scientific name “Python” and “aster” translates into “Snake Star” alluding to the very snake like shape of the arms. 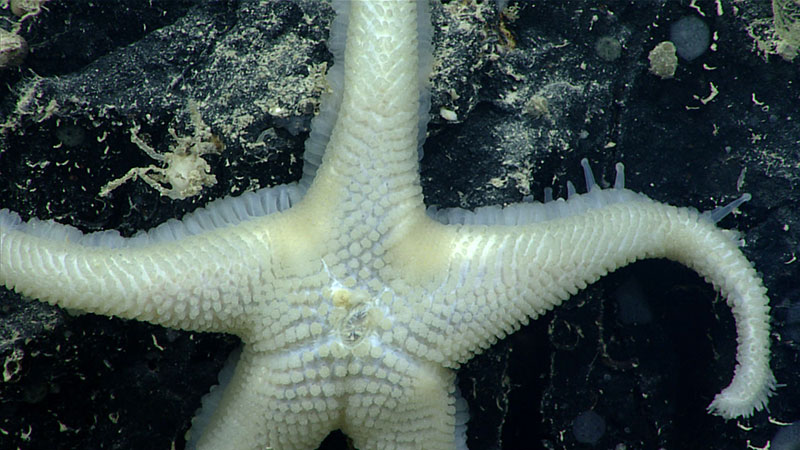 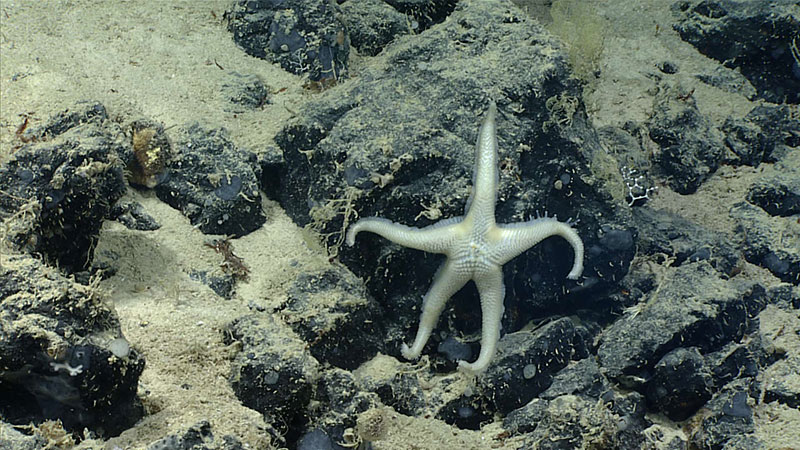 These stars have a bizarre skeleton with spines and ridges present across the surface that are covered by large fleshy bags. The skeleton on these animals is minimal compared to those in shallower depths and is composed primarily of skin and white fleshy bags. Do these fleshy bags serve a purpose? Unclear.

NOAA Ship Okeanos Explorer was one of the first exploration vessels to observe and share Pythonaster in its habitat: first during the 2014 Atlantic expedition surveying McMaster Canyon, followed by numerous observations in the Pacific during 2015-2017 CAPSTONE expeditions, and then in 2017 in the Gulf of Mexico.

Prior to work on NOAA Ship Okeanos Explorer, these animals were known only from six individual specimens worldwide. Our observations of these sea stars have now documented their feeding behavior and tripled the number of observations!

On at least two occasions at depths below 2,000 meters (6,561 feet), we’ve observed this white-colored, spiny sea star in the family Goniasteridae. 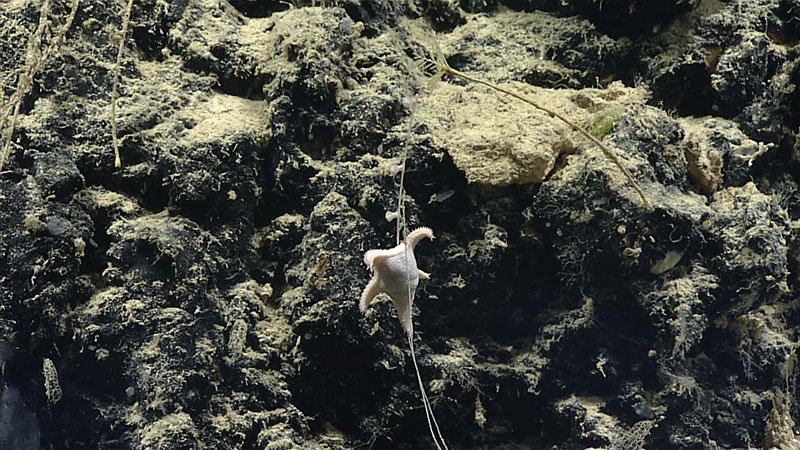 A potentially new species of Evoplosoma seen feeding on a bamboo coral during Dive 5 of the Océano Profoundo 2018 expedition. Image courtesy of the NOAA Office of Ocean Exploration and Research, Exploring Deep-sea Habitats off Puerto Rico and the U.S. Virgin Islands. Download larger version (jpg, 1.3 MB). 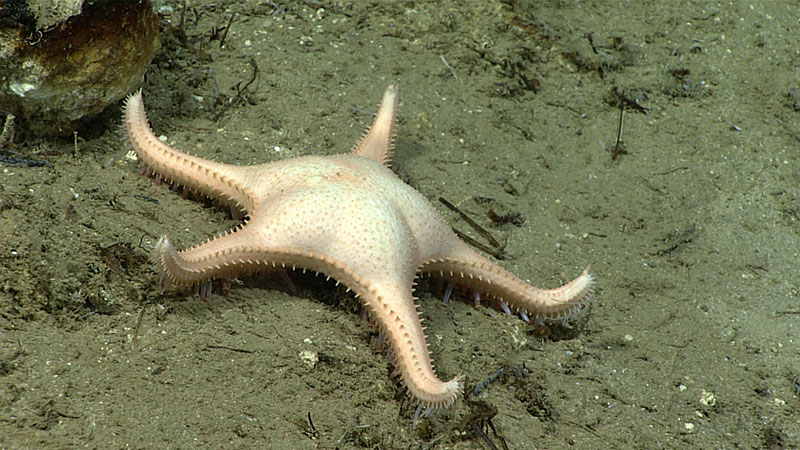 One likely individual of this sea star was observed feeding on bamboo coral during one of our earlier “deep” dives. We’ve since seen what might be a larger representative but not feeding on corals.

The genus Evoplosoma is now a documented predator on corals in the Pacific and the Atlantic, but such was not always the case. In the early 2000s, there were six species known from eight specimens worldwide! Work since then has shown many more species and often with video documentation of their feeding behavior!

This species is different from other known species because of its color, the stark white is a departure from the usual orange. I look forward to examining the specimen we collected during this expedition to determine what it ultimately will be...

During one of the deep dives of the Océano Profoundo 2018 expedition, the remotely operated vehicle Deep Discoverer came upon this very spiny, swollen six-rayed white sea star. It is most likely in the family Pedicellasteridae, a deep-sea group that is considered an early member of the group including the common sea stars you see on the beach (e.g., Asterias or Pisaster).

I’ve seen similar species to these in deep-sea habitats in Antarctica and in the Pacific in deep-abyssal regions. The Antarctic species is a significant predator on animals which live adjacent to hydrothermal vents. The significance of this species is unknown, but it is similar in appearance. 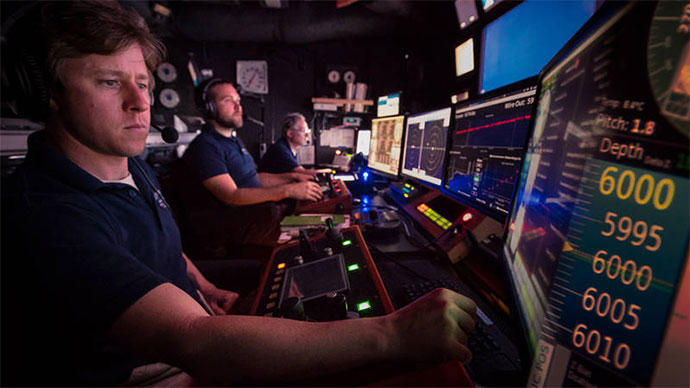