Telepresence involves the use of technology to allow a person to feel, interact, and collaborate as if they were present at one location when in fact they are at a different location. When applied to ocean exploration, telepresence technology allows a potentially unlimited number of scientists on shore to participate in at-sea ocean exploration, adding their expertise to missions no matter where in the world a ship, or the scientists, are located. In addition to providing input from a broad range of scientific experts, telepresence also allows the public to observe and follow expeditions in real time. 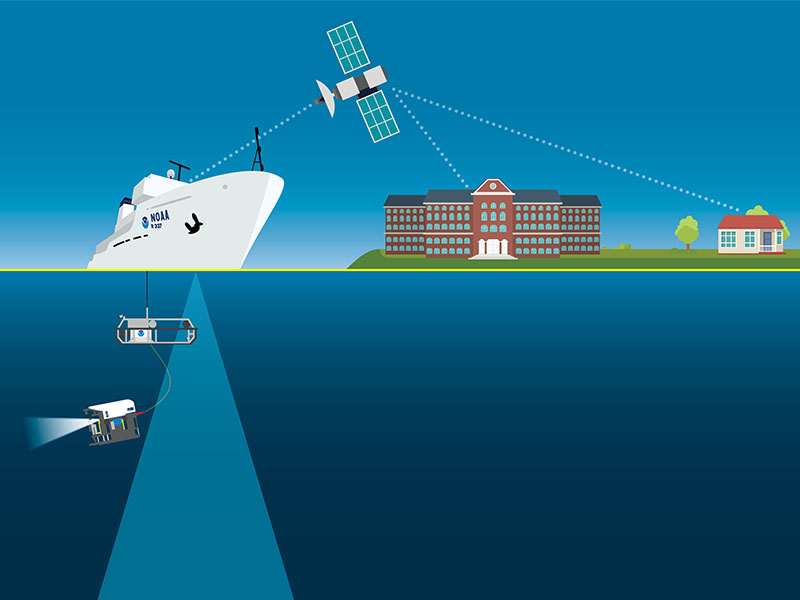 How does it work?

Telepresence uses modern computer networks and a high-bandwidth satellite connection to enable remote users to participate virtually in ocean research and exploration expeditions. Telepresence-enabled platforms, such as NOAA Ship Okeanos Explorer, use satellite technology to transmit data and video in real time from the ship to a shore-based hub. From there, data are transmitted in high definition via the internet to sites around the world such as research facilities, educational institutions, and even home computers or mobile phones.

Perhaps the most prominent piece of radio equipment on NOAA Ship Okeanos Explorer is the large dome (radome) that houses the ship’s 2.4-meter Very Small Aperture Terminal (VSAT) dish antenna, owned and operated by NOAA’s partners at the Global Foundation for Ocean Exploration. The VSAT antenna is the critical link between Okeanos Explorer and the satellites that relay information to shore, making telepresence interactions possible. Image courtesy of NOAA Ocean Exploration, Windows to the Deep 2021. Download image (jpg, 28 MB).

While the high-bandwidth satellite aspect of telepresence delivers data to shore where scientists and others can access it, the data delivery to shore in and of itself is essentially a form of one-way communication. To truly bring experts from multiple remote locations “onto” the exploration team, the telepresence system must provide two-way communication for several types of data and information.

For operations on Okeanos Explorer, live video is one of most important types of data and is provided via three high-definition streams. Advances in technology have reduced the latency of these live streams to as low as 1.5 to 2.0 seconds or even less for members of the science community, though a connection latency of 5 to 15 seconds is more common for public streams used by viewers that are not members of the expedition science team. A low latency allows scientists on shore to actively participate in a dive, guiding ROV paths and providing input to sampling operations.

To allow shore-based and ship-based scientists to communicate during an expedition in real time, telepresence relies on a teleconference call system and an online chatroom. Like most chatrooms, anyone logged into the system can add their comments to the conversation. Two-way telepresence communications also allows other kinds of participation during ROV dives, such as real-time annotation of dives.

Another example of participation via two-way telepresence communication is “telepresence mapping” in which key members of the expedition team work on shore to run mapping operations on the ship, as well as do data processing tasks and even assist with troubleshooting sonar systems.

Telepresence also streamlines other data management tasks with a custom suite of software and standard operating procedures that automatically collect raw and some processed data from different acquisition computers, and then move that data to a central server called the data warehouse. Then the system automatically moves all the data over the satellite connection to shore as bandwidth is available. For operations on Okeanos Explorer, once the data are in the data warehouse, any member of the science team can access the data on an FTP site.

The continuing evolution of operating protocols, refinement of effective data management and distribution processes, and effective training of participants to operate between ship and shore are also key elements of this paradigm that continue to improve along with the development and application of this incredible technology for education and outreach purposes.

Why is it important? 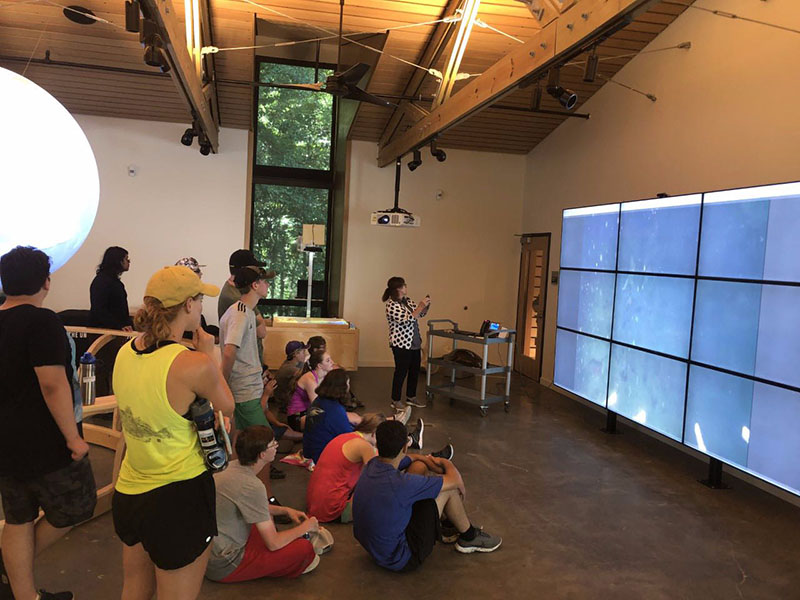 NOAA Ocean Exploration has been leveraging telepresence capabilities since the early 2000s. Through telepresence, remote users have provided support for operations planning and execution, helped to troubleshoot hardware and software, and interpreted data during exploration ocean mapping and ROV missions led by the office.

The application of telepresence technology for ship-based work is extremely efficient as it permits unlimited access to personnel on shore, transcending schedules, expertise, skills, and abilities of traditional shipboard teams. Telepresence also enables the development of partnerships between geographically dispersed groups who otherwise might not have the opportunity to collaborate due to cost or logistics. And, using this technology allows for the most efficient use of all resources, as access to data and information between ship and shore is immediate and sustained for the duration of an expedition.

Telepresence also brings real-time science, exploration, and excitement of discoveries into classrooms, newsrooms, and living rooms, opening new educational opportunities that are a major part of NOAA Ocean Exploration’s mission to explore the ocean for national benefit. As technologies continue to evolve, so too will telepresence capabilities for ocean exploration continue to expand, bringing with them new ways of exploring and communicating about our little-known ocean world.

How does NOAA deliver live video from ship to shore?

Telepresence Exploration: Teleportation for Everyone