The Monument in Your Backyard 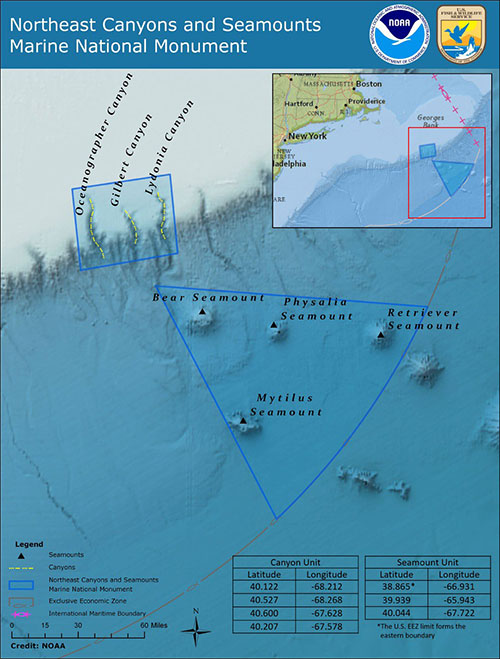 The monument is in two units: one on the continental shelf with canyons and one in the open ocean with seamounts. Image courtesy of USFWS/NOAA. Download largest version (jpg, 675 KB).

Did you know there’s a national treasure in your backyard?

A mere 130 miles southeast of Cape Cod, Massachusetts, lies the Northeast Canyons and Seamounts Marine National Monument. One of just five marine national monuments — and the only one off the U.S. mainland — it protects an area of open ocean roughly the size of Connecticut.

The canyons unit includes three undersea canyons — one deeper than the Grand Canyon — at the edge of the continental shelf. Farther out, the seamounts unit has four underwater mountains, one taller than any east of the Rockies.

The U.S. Fish and Wildlife Service and the National Oceanic and Atmospheric Administration co-manage the monument. Superintendent Brittany Petersen agreed to answer my questions about this mysterious and fascinating place. 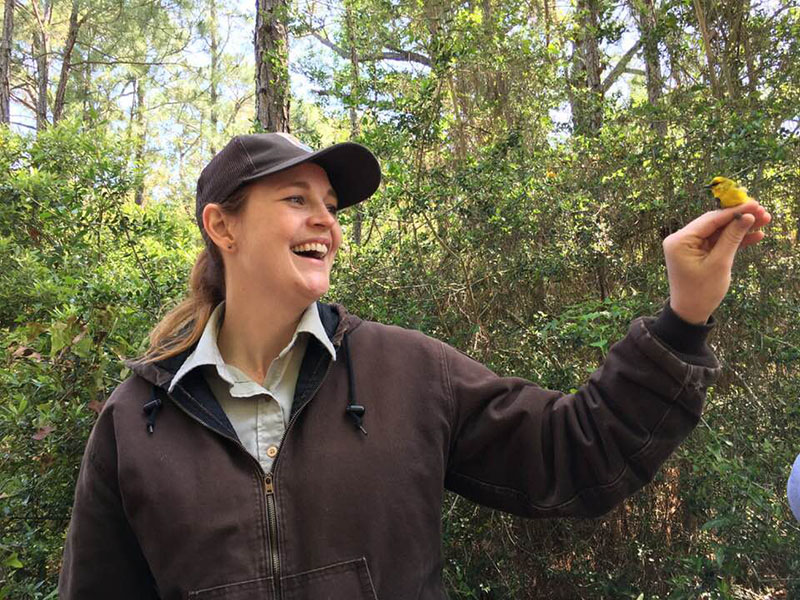 How did these underwater canyons and mountains come to be?

The seamounts are part of a chain of ancient volcanic mountains. Bear Seamount is the oldest in the chain, formed more than 100 million years ago. It’s also the tallest, at nearly 2,134 meters (7,000 feet)!

During the last glacial period, a layer of ice one mile thick blanketed what’s now New England. Because much of the ocean’s water was locked up in the glacier, sea level was lower, and Georges Bank — part of the continental shelf that is now submerged — lay exposed.

Erosion carved chasms in the island’s cliffs. One of those canyons — Oceanographer — is more than 1,981 meters (6,500 feet) deep and now lies within the monument.

What types of wildlife are found there?

Cold water rising from the depths of the monument brings nutrients that attract abundant populations of plankton, krill, forage fish, and squid. These prey animals, in turn, draw an amazing variety of species, including whales, dolphins, octopuses, and sea turtles. Atlantic puffins spend the winter there, bobbing on the water’s surface and diving for fish. 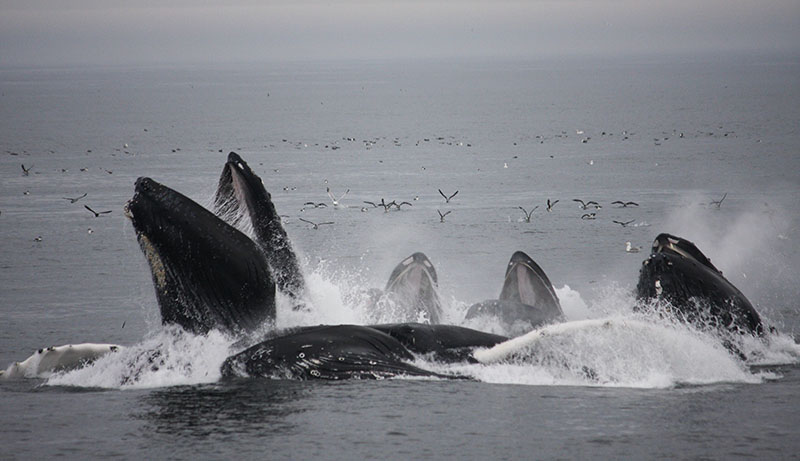 The monument is a haven for marine mammals, like these whales. Image courtesy of NOAA. Download largest version (jpg, 4.2 MB).

Scientists from the New England Aquarium found one of the highest concentrations of whales and dolphins ever spotted in the Atlantic within the monument. Four species of sea turtles — green, Kemp’s ridley, leatherback, and loggerhead — summer there.

Deep-sea corals, sponges, and anemones live side by side in the canyons and on the seamounts. Unlike their tropical cousins, these corals grow tall and thin due to lack of sunlight, creating a coral forest under the sea. They provide food, shelter from predators, and breeding, spawning, and nursery habitat for many other creatures. 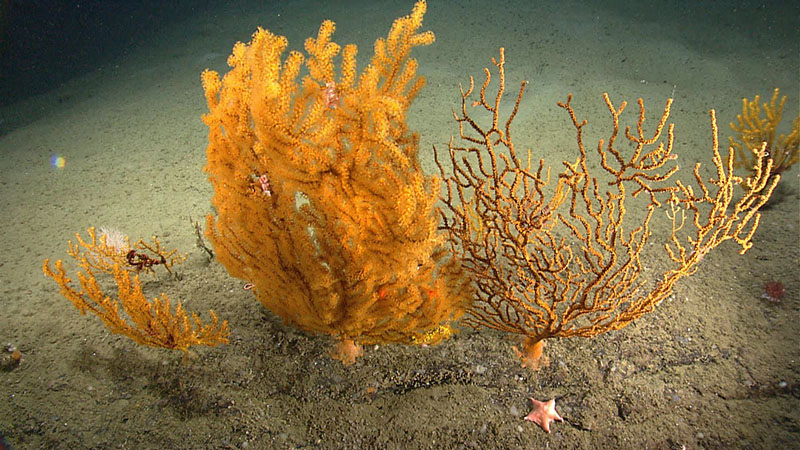 It sounds far away, and I may never visit this place; why should I care about it?

The monument may seem far away, but it’s no more distant from Cape Cod than the New York border is from Boston. In fact, in a sense, it’s in the East Coast’s backyard! What happens there affects the mainland, and vice versa.

The unique geological features of the monument produce a nutrient richness that is unparalleled in the Atlantic, providing sustenance for myriad species. We enjoy some of these — think lobster and tuna — on our plates.

The whales that are enjoyed by thousands of people on viewing expeditions each year and the fish caught on charter boats feed there. 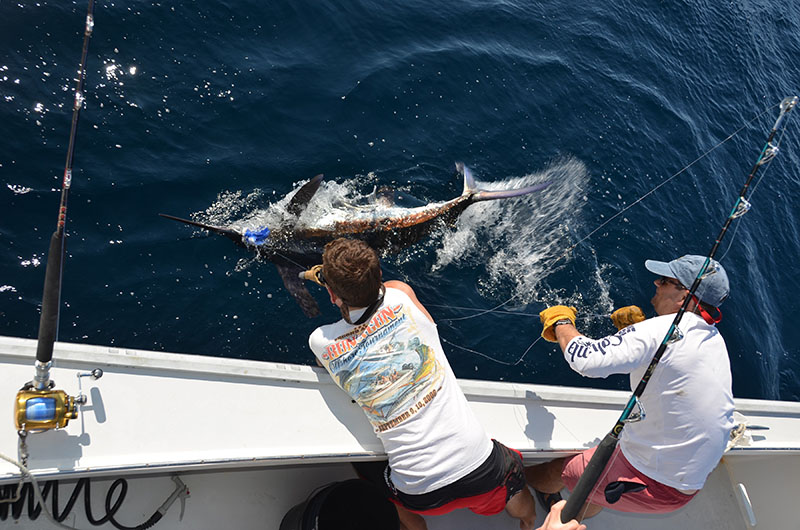 The same wildlife that use our rivers and coasts rely on the monument. Migratory fish species, like river herring and shad, spend part of their lives in inland waterways and part in open ocean like the monument.

The monument is a scientific cornucopia. We know more about planets millions of miles away than we do about what’s just offshore. Possible discoveries boggle the mind: 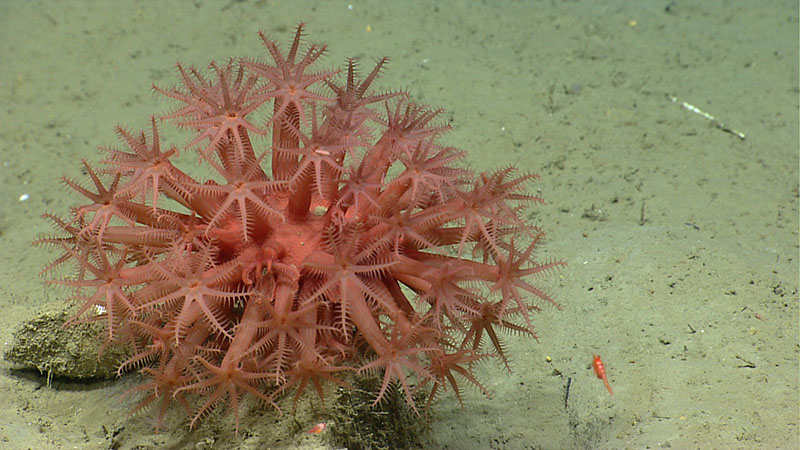 How can I visit?

Because it’s hard to bring people to the monument, we’re creating ways to bring the monument to people through partnerships with organizations like Mystic Aquarium  in Connecticut. A new, immersive exhibit at the aquarium will let visitors experience the magnificence and mystery of the monument.

How can I learn more?

In June, we kicked off what we’re calling our Monumental Summer. Throughout the month, we staged a Monumental Takeover of the Service’s social media accounts, which led up to a Facebook Live event  on June 24.

At the end of July, we’ll host a Deep Dive when NOAA Ocean Exploration deploys remotely operated vehicles from NOAA Ship Okeanos Explorer to plumb the depths of the monument as part of the 2021 North Atlantic Stepping Stones expedition. On July 27, during an expedition dive on Retriever Seamount, we’ll livestream from Mystic Aquarium with a panel of Service scientists discussing the ecological importance of the monument (click on the link to watch an archive of the live event).

August will be a Mystical Month, with the grand opening of the monument exhibit at Mystic Aquarium.

Of course, any day of the year, you can visit the monument website for information, photos, and videos. 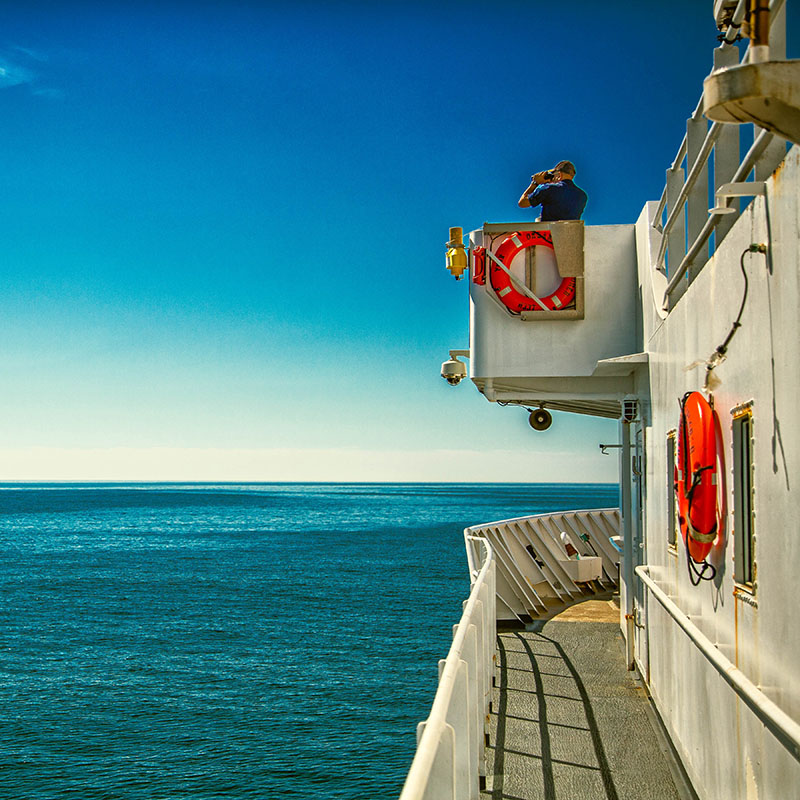