A FIVE Star Salute for the Fourth of July!

NOAA Ship Okeanos Explorer is currently operating off the southeast coast of the United States, and her scientists are hard at work studying coral and other marine habitats in the Atlantic Ocean. But even though we are in America’s “backyard,” the deep sea still has many new discoveries and surprises to unveil!

To celebrate our country’s star-spangled Independence day, here are FIVE species of star-shaped echinoderms (mostly sea stars) to commemorate discovery and the 4th of July!

Image courtesy of the NOAA Office of Ocean Exploration and Research, Windows to the Deep 2019. Download larger version (jpg, 1.1 MB).

One of the sea star species we’ve encountered most frequently so far has been this goniasterid sea star, Plinthaster dentatus, sometimes called a “cookie” or “ravioli” star!

This species stands out because the arms and disk are nearly confluent, thus presenting a more pentagonal shape relative to other sea stars.

This species has been recorded in many trawl-collected specimen records in the past, but perhaps what makes our observations of this species here SO significant is the numerous FEEDING observations that have been made.

On one dive, we observed some very large individuals of this species perched on the surface of numerous glass sponges.

This video from Dive 07 of the expedition shows an example of Plinthaster dentatus feeding, along with one or two other species of sea stars. Video courtesy of the NOAA Office of Ocean Exploration and Research, Windows to the Deep 2019. Download larger version (mp4, 64.2 MB).

Among the most important outcomes of these dives, aside from recognizing previously unknown species, are observations of known species in the process of performing their basic day-to-day biology, feeding, spawning, etc. This species’ biology has been largely unknown despite the fact that the species has been known since 1884!

Sometimes we have extraordinary observations, such as the massive cidaroid sea urchin feeding event on this sponge, shown in the image below! At least six individuals were involved. This prompts many questions! Is it by chance that they are all in the same place? Is this sponge damaged and the sea urchins taking advantage? Is this a common occurrence?

A massive cidaroid sea urchin feeding event on a sponge, with at least six individuals involved. Image courtesy of the NOAA Office of Ocean Exploration and Research, Windows to the Deep 2019. Download larger version (jpg, 1.7 MB).

Like fireworks, this big cluster of stars presents a “fireworks display” of echinoderm feeding!

Video courtesy of the NOAA Office of Ocean Exploration and Research, Windows to the Deep 2019. Download larger version (mp4, 82.4 MB).

This was a species I described in 2010, and which was originally collected by Martha Nizinski, a NOAA National Marine Fisheries Service biologist who works on coral and their related faunas. The description was based on three museum specimens. I had never seen it alive.

This species was hypothesized to be a coral predator when I described it, based on fragments found in its gut, but now we have solid evidence of this species feeding on a primnoid octocoral! This was the FIRST time it’s been seen alive! 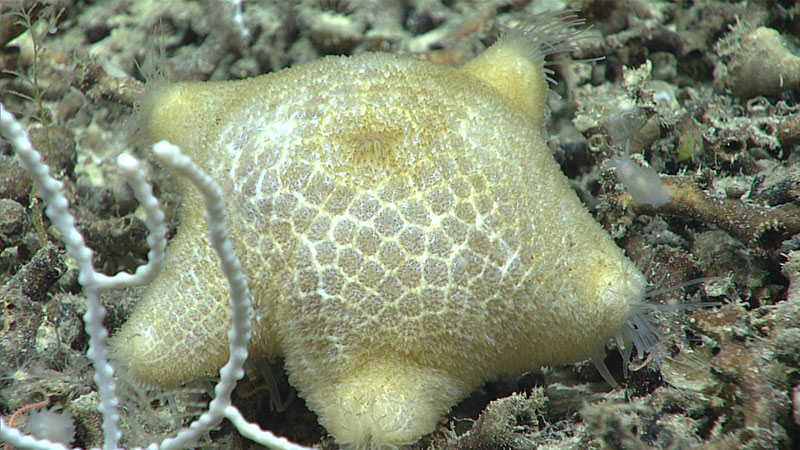 Image courtesy of the NOAA Office of Ocean Exploration and Research, Windows to the Deep 2019. Download larger version (jpg, 1.3 MB). 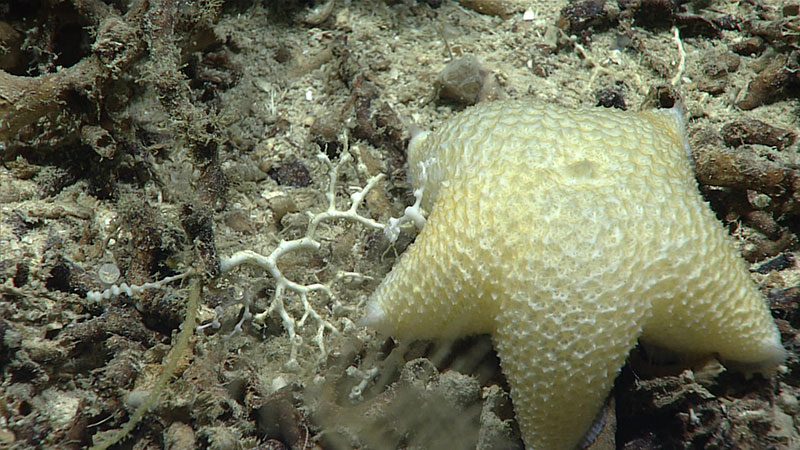 Image courtesy of the NOAA Office of Ocean Exploration and Research, Windows to the Deep 2019. Download larger version (jpg, 1.3 MB).

During one dive, we saw at least two species of sea stars in the genus Pteraster, a.k.a “cushion stars” or “slime stars.”

These sea stars are unusual because they have a thick, canopy-like membrane which covers the actual body surface. What you see in the pictures are those membranes, which sometimes looks muscular or net-like.

Their common name of “slime star” comes from the observation that several species of Pteraster produce copious amounts of mucus as a defense mechanism.

Image courtesy of the NOAA Office of Ocean Exploration and Research, Windows to the Deep 2019. Download larger version (jpg, 1.5 MB).

This species is likely in the genus Hymenaster. Members of this family have an unusual body structure with a gelatinous covering and a soft fleshy body. This species was almost completely transparent, showing off internal structures such as its stomach and internal skeleton. Biology is unknown.

Image courtesy of the NOAA Office of Ocean Exploration and Research, Windows to the Deep 2019. Download larger version (jpg, 1.6 MB).

Brittle stars, or ophiuroids, are distant relatives of sea stars and are distinguished by having arms which are more sharply set off from the disk, as well as much more slender and brittle. In contrast to most sea stars, many brittle stars are cryptic and live hidden under rocks or among protective substrates.

Brittle star diversity is enormous, with over 2,000 known species. Many of them have very interesting, sometimes extremely unusual body forms and shapes. These body forms are often poorly understood.

On our current Okeanos Explorer, cruise we observed one of those extremely unusual body forms!

This brittle star showed the disk covered, or even replaced, by a translucent purple bag-like covering. The arms were also covered by translucent tissue.