This bobtail "squid" was seen swimming through the water column before landing on the seafloor during Dive 15 of the expedition. Belonging to the cephalopod order Sepiolida, these animals are generally known as "bobtail squids" because of their rounded bodies. Although called squids, bobtails have long been considered to be modified cuttlefishes that have lost the internal shell (cuttlebone). However, recent evidence from DNA sequencing indicates that they are not closely related to either squids or cuttlefishes, although they are in the broad group of 10-armed cephalopods. No matter who they are related to, bobtails are pretty cute! Caption adapted from this mission log by Mike Vecchione, NOAA/National Marine Fisheries Service National Systematics Lab, National Museum of Natural History. Video courtesy of the NOAA Office of Ocean Exploration and Research, Windows to the Deep 2019. Download larger version (mp4, 43.7 MB).

Today we dove about 70 miles off the coast of North Carolina, at the base of a portion of the Currituck Landslide. This submarine landslide is estimated to have occurred between 25,000-50,000 years ago, when sea level was about 200 meters (656 feet) shallower. As the eastern seaboard is not immune from this kind of geologic activity in the future, it is important to characterize this kind of activity in order to ground-truth geohazard models as scientists attempt to understand what could trigger such activity, and what the impacts of such an event could be.

A sea pen (Pennatulacea) with a small shrimp (Mysida) visible in the background. Image courtesy of the NOAA Office of Ocean Exploration and Research, Windows to the Deep 2019. Download larger version (jpg, 1.1 MB).

Our dive was delayed by a couple of hours due to high winds, waves, and currents during the drift test this morning, but fortunately, conditions improved and we were able to launch the remotely operated vehicle (ROV) at approximately 10:00 ET. We reached the seafloor near the base of the feature and dove a vertical track up the wall at the steepest slope indicated by bathymetry. The first part of the dive was over soft, fine sediment with some rocks and boulders scattered on the seafloor. A number of ophiuroid brittle stars, sea pens (Umbellula sp. and Kophobelemnon sp.), urchins, and fish (notably halosaurs, sorcerer eels, cusk eels, macrourids, and eelpouts) were seen among the soft sediment.

A brittle star seen on the side of a rockface. Image courtesy of the NOAA Office of Ocean Exploration and Research, Windows to the Deep 2019. Download larger version (jpg, 1.9 MB).

As the bottom below us became slightly more rocky, a number of Flabellum cup corals were observed, and one specimen was sampled using the suction sampler. A benthic ctenophore attached to a remnant stalk was also sampled. At a depth of approximately 1,550 meters (5,085 feet), the bottom became steeper and more rocky. A number of brisingid starfish were seen on the rocky outcrop, in addition to some sponges and anemones. Surprisingly, the rock surface did not have as much sessile organism settlement as we might have expected in such an area. Towards the top of the feature, a geologic rock sample was collected. Upon inspection, it appeared that the underlying rock is a relatively soft mud or siltstone with a large number of burrow holes.

Sheer walls seen at the Currituck Landslide. Scientists were somewhat surprised to find barren walls on habitat that might otherwise have been expected to be colonized by sessile organisms. Image courtesy of the NOAA Office of Ocean Exploration and Research, Windows to the Deep 2019. Download larger version (jpg, 1.5 MB). 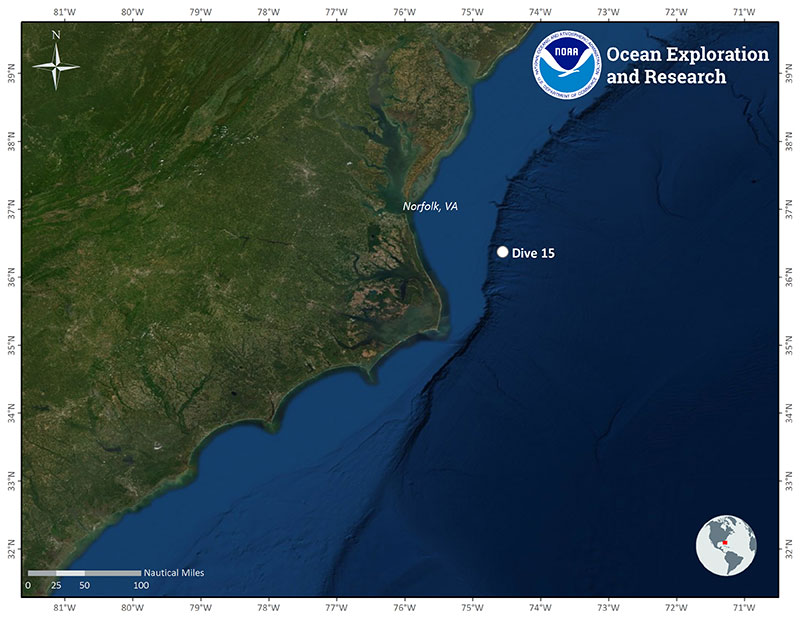 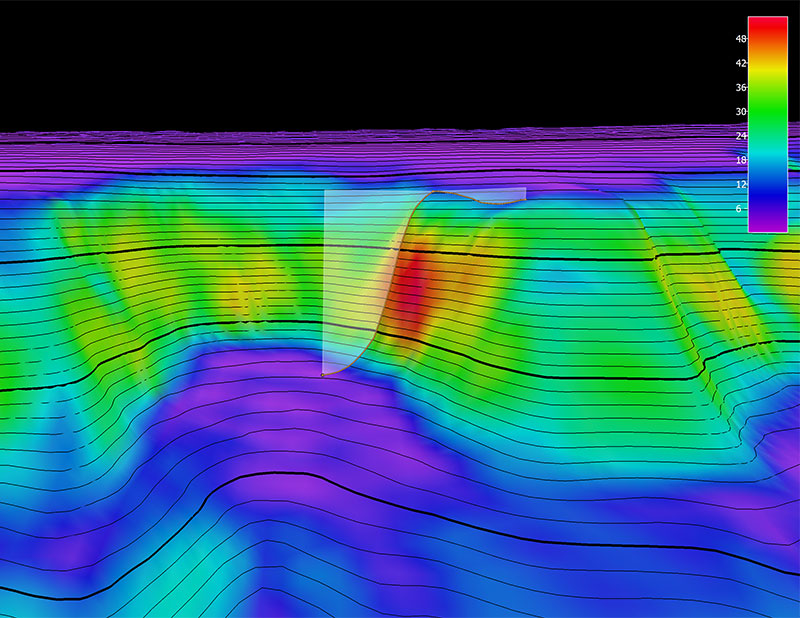