The Journey of NG301 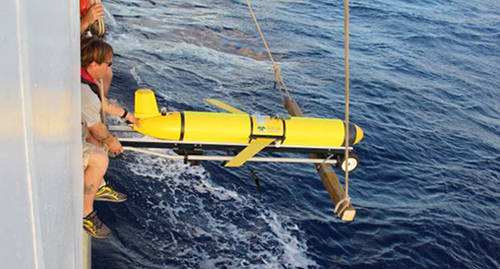 NOAA and the U.S. Navy Oceanographic Office began a partnership in 2014 to deploy ocean gliders in the Caribbean to study and record ocean conditions and ocean currents and record biological sounds made by marine mammals and many species of reef fish that make sounds when gathering to reproduce. 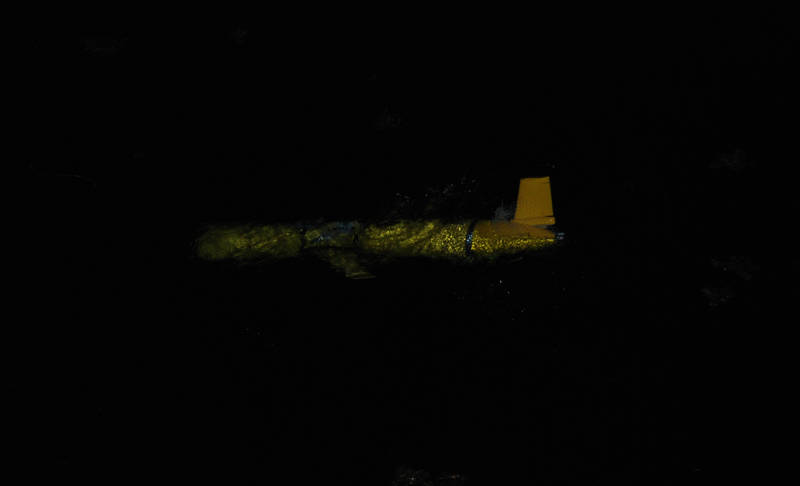 Spotted! Even though the strobe on NG301 was broken, the Okeanos team was still able to spot the glider in the bright moonlight, with a little help from a night vision scope. Image courtesy of the NOAA Office of Ocean Exploration and Research, Exploring Puerto Rico’s Seamounts, Trenches, and Troughs. Download larger version (jpg, 2.5 MB).

The gliders and other autonomous vehicles are critical tools we use to extend the endurance and extents of the ocean that we can study in addition to the work we conduct using large ocean research vessels. The ocean gliders are particularly powerful tools since they can operate autonomously for three to four months, using very little power to slowly swim and undulate through the water column by changing buoyancy, covering 10-15 nautical miles a day.

The joint mission goal for NOAA and the Navy was to deploy two gliders in the U.S. Caribbean to map the ocean temperatures, currents, and other properties and to listen for reef fish and marine mammal sounds in remote areas that are poorly studied. The data collected on both gliders would provide insights into ocean currents and ocean conditions. The Caribbean Sea is a dynamic region of the western Atlantic Ocean that is poorly understood due to its size and the expense of covering the vast regions around the islands.

In early March, after a couple of attempts, the scientists and crew of NOAA Ship Okeanos Explorer deployed a glider, NG301, on the north shelf of St. Thomas, U.S. Virgin Islands. The glider’s mission was to swim unattended along the northern shelf of the Virgin Islands from Culebra Island, Puerto Rico, to the U.S. – British Virgin Islands boundary. 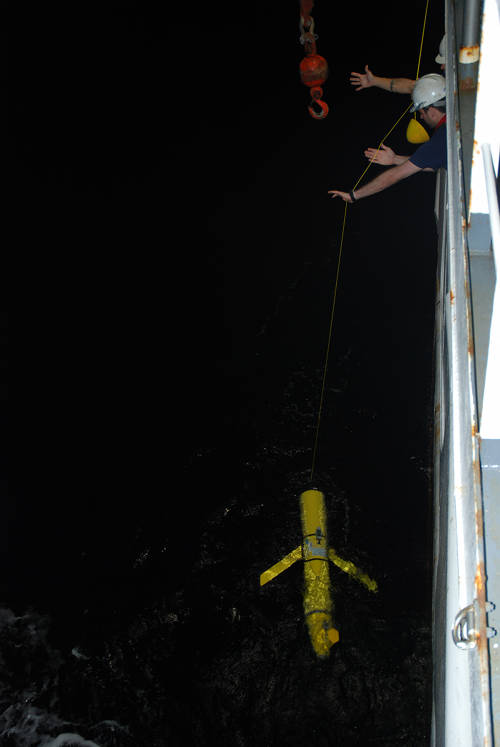 Coordinating the retrieval of the glider was a bit tricky, with the ship moving, the glider bobbing in the waves, and limited visibility at night, but the Okeanos team managed to attach NG301’s recovery rope to the ship’s crane and bring it safely back on board. Image courtesy of the NOAA Office of Ocean Exploration and Research, Exploring Puerto Rico’s Seamounts, Trenches, and Troughs. Download larger version (jpg, 3.3 MB).

Scientists at the National Centers for Coastal Ocean Science (NCCOS) tracked the glider from March 17 to March 24, receiving an automated email with the glider’s status and GPS location about every three hours.  And then silence...for a full day.

Then days passed and the Navy declared the glider lost at sea. NCCOS turned its attention to another glider mission, NG292, that was deployed by NOAA Ship Nancy Foster on March 18. This glider had a similar mission objective to work the ocean on the southern coast of St. Croix, U.S. Virgin Islands, recording ocean temperature, ocean conditions, and biological sounds.

Then a call, noticed by a new watch stander in the Glider Operations Center. Sometimes false calls come in, so it was important to be sure before notifying all interested. Sure enough, it was NG301.

NG301 surfaced less than 800 meters (less than half a mile) from the last reported location north and a bit west of St. Thomas, U.S. Virgin Islands. The glider had been underwater, at 150-160 meters depths for the past 30 days. But the glider was trapped at depth or stuck.

When it can’t surface, the system resets, and eventually it ejects the last ballast weight. This allowed the glider to come free and float to the surface. Unfortunately, it had rebooted so many times that it had forgotten that it lost its ballast weight, so it tried to resume its last known mission and dive. However, without the weight, it could only bob on the surface. The glider pilots were able to instruct the glider to stop diving and conserve power in preparation for recovery. 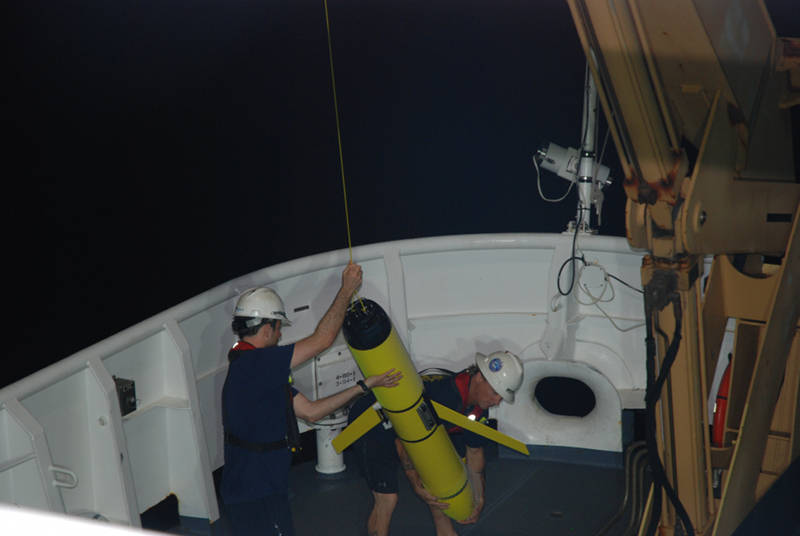 Now the challenge...how to recover the glider, now 30 miles north of St. Thomas and Culebra? Fortunately, the Okeanos Explorer team was still listening in to the email communications between the Navy and NCCOS. As luck would have it, they were going to be within a few miles of the glider's location early the next morning. But the strobe that we typically use to locate the glider at night wasn’t working. Maybe it was damaged during an impact with a ship—we can’t be sure.

Okeanos decided to place itself at the last location using the highly precise Dynamic Positioning System, and “drift” in the direction of the glider. Just off the bow, spotted using the light of the moon (aided by a night vision scope), the glider was bobbing at the surface, yards off the bow of the ship. At 0200 this morning, Okeanos pulled alongside the glider, secured it with a line, and brought it on deck using the ship’s crane. A successful recovery of a once-lost glider! A few marks on the hull suggested impact, maybe by a passing ship while the glider was surfacing way back on March 24.

It is still not clear how the glider spent its time under the ocean surface for 30 days. The acoustic recorder continued to record sounds made by the glider and animals until it was recovered. Maybe the sounds will provide some clues as to what happened.