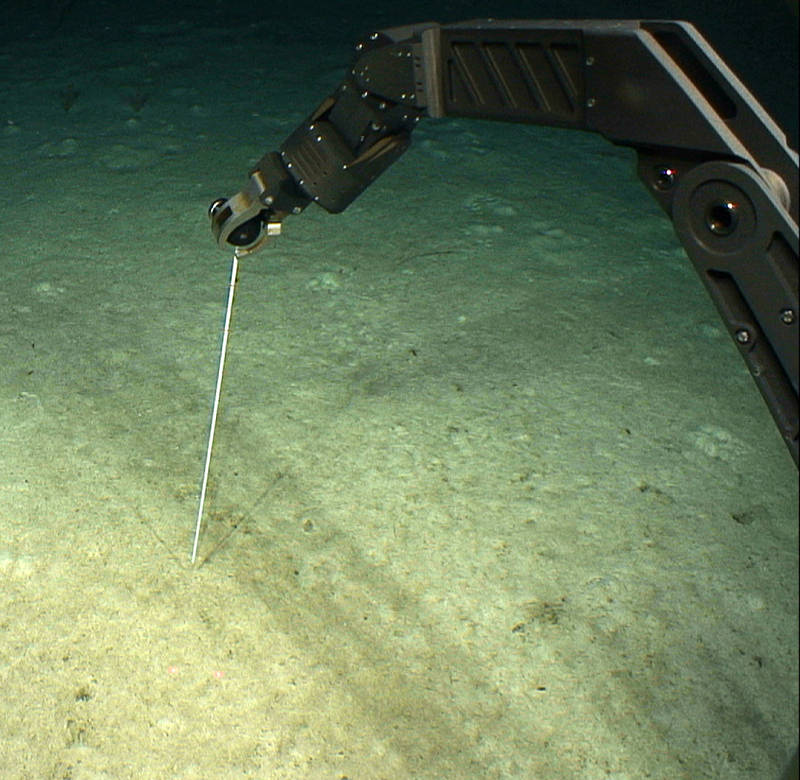 Figure 1: Measuring the thickness the muddy ooze using the sea poke during Dive 10 on the pinnacle, southeast of St. Croix. Image courtesy of the NOAA Office of Ocean Exploration and Research. Download larger version (jpg, 945 KB).

Studying geology underwater is hampered by the continuous shower of mostly organic detritus falling from the upper layers of the ocean called marine snow. This detritus builds up to form a muddy ooze covering any gently dipping rock surface, thereby preventing examination of that surface (Figure 1). Consequently, most remotely operated vehicle (ROV) dives are sited on steep slopes (mean slope greater than 40 degrees), where locally the rocks might be exposed in near-vertical outcrops which the marine snow is unable to cover.

Of course, diving on steep slopes means that commonly we see evidence of slope instability in the form of landslides and/or the bare rock faces, called headwall scarps, left behind after the landslide has occurred. We found spectacular examples of both these features during our dives.

Figure 2 shows a headwall scarp in the carbonate Juanna Diaz Formation in Guayanilla Canyon to the south of Puerto Rico. Here the limestone below the arcuate or curved scarp has broken away and slipped down the slope.

Figure 3 shows a landslide deposit of boulders sitting on the east wall of Mona Canyon, and the relative paucity of the muddy ooze cover tells us that the landslide was relatively recent because the marine snow has not had time to accumulate and bury it. 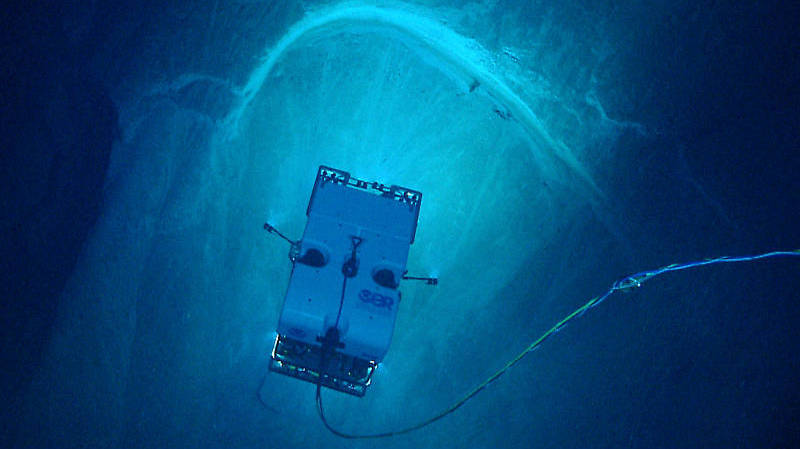 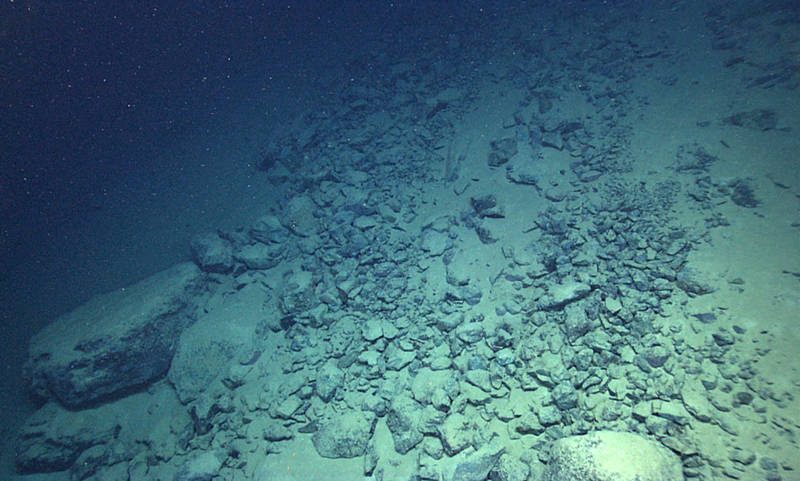 The lack of light below sea level means the lights of our ROV system can only image relatively small (meters to maybe a hundred meters) landslides or small parts of bigger landslides.

We can see bigger landslides and slumps in the maps of the seafloor which we collect during our night time surveying using our sonar systems. Our multibeam sonar measures the depth of, and therefore maps the bathymetry of, the seafloor by analyzing the time it takes for sound waves to travel from NOAA Ship Okeanos Explorer to the seafloor and back. Using this system, we can map features that are hundreds of meters to many kilometers wide.

Figures 4 and 5 show two examples of 20-30 kilometer-wide landslides that are preserved in the Mona Canyon to the northwest of Puerto Rico, as well as an even deeper, submarine slide on the northern flank of the Puerto Rico Trench. 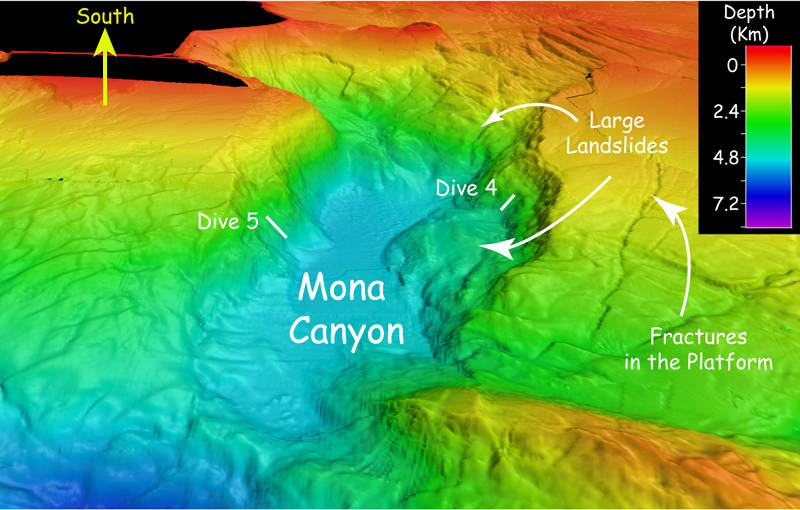 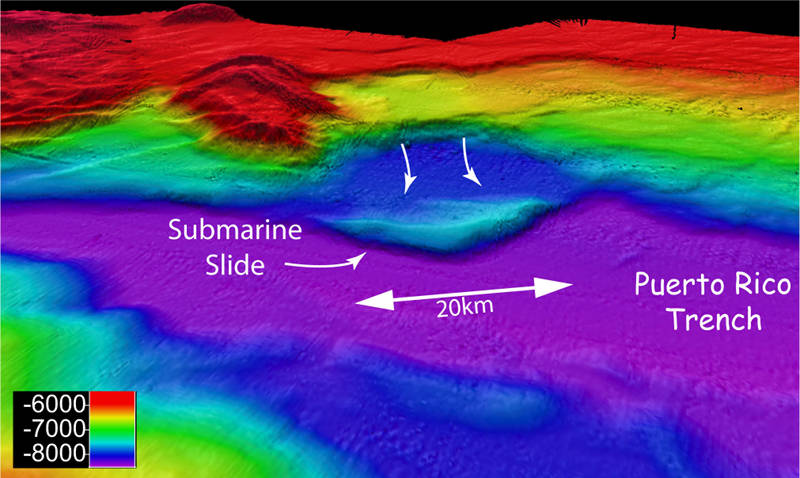 Why Are Underwater Landslides Important?

So why are these landslides important? Well, a rapidly moving underwater landslide can displace water either in front of it or behind it and that displacement can potentially cause a tsunami or tidal wave that can have a catastrophic effect on the coastal towns and villages of Puerto Rico (Figure 6).

On October 11, 1918, the western coast of Puerto Rico was inundated by a medium-sized tsunami that produced waves as high as six meters (almost 20 feet). Forty people were killed by the tsunami, and the tsunami caused an estimated 4 million dollars in property and other damages to the coastal communities of Puerto Rico.

Eyewitnesses to the tsunami indicate that the event was marked first by a large withdrawal of water from the shore (the tsunami trough), followed by a large wave (the tsunami crest). The area surrounding Aguadilla, located in the northwestern corner of the island, saw the most damage; four-meter-high waves wiped out a village of huts located along the beach, killing 32 people. This tidal wave was even recorded some four hours later as a series of three to six-centimeter-high waves by a tidal gauge off the coast of Atlantic City, New Jersey (Figure 7). 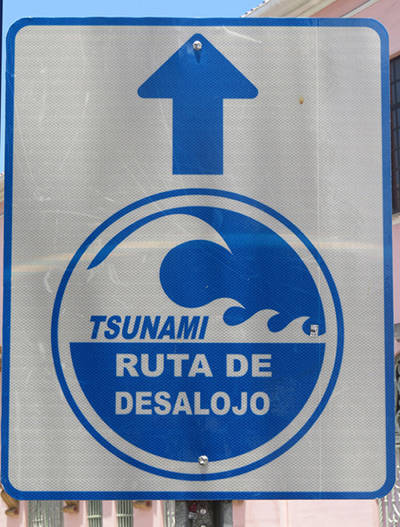 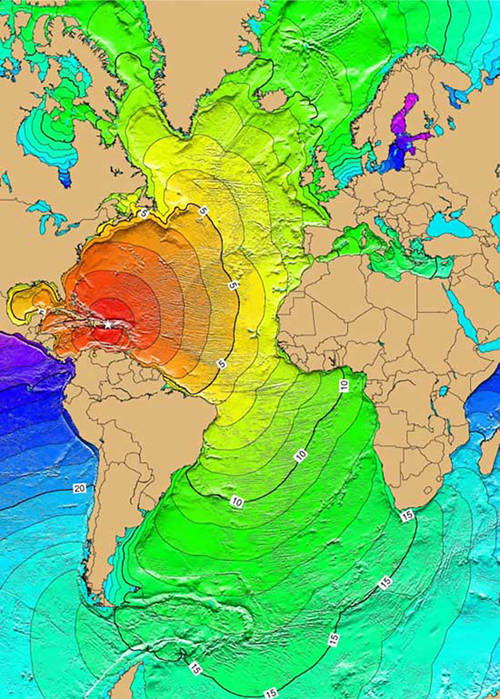 Figure 7: Map of the time (in hours) it took for the 1918 earthquake tsunami to traverse the oceans. The earthquake generated a tsunami with runup heights reaching six meters, causing extensive damage along the western and northern coasts of Puerto Rico. The earthquake and tsunami caused $4 million damage; 116 people were killed and 100 were reported missing. Image courtesy of NOAA. Download image (jpg, 113 KB).

But, what causes the landslides? The most likely cause of large underwater landslides is big earthquakes which can create a complex set of accelerations that alter the gravitational load on any slope. For example, seismic waves can cause vertical accelerations that can successively increase and decrease the normal load on a slope and horizontal accelerations can cause a shearing force because of the inertia of the potential landslide mass. These processes are complex, but together can be sufficient to cause a slope failure and a catastrophic landslide. 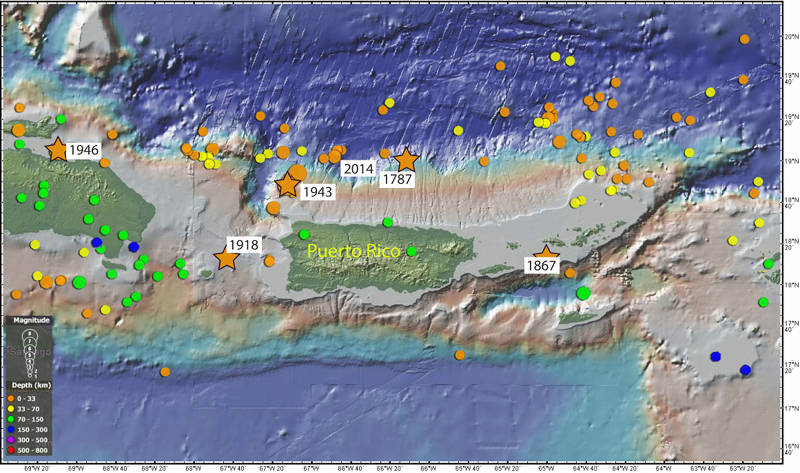 Figure 8: Map showing the epicenters of all the magnitude 5 and greater earthquakes around Puerto Rico for the last 100 years. Filled circle color indicates depth and circle size indicates magnitude. The five biggest, most destructive earthquakes of the last 250 years with magnitudes of 7 and greater are shown by stars. Bathymetry data generated using the Global Multi-Resolution Topography (GMRT) synthesis in GeoMapApp. Earthquake locations courtesy of the U.S. Geological Survey.. Download larger version (jpg, 1.1 MB).

The 1867 Magnitude 7.5 earthquake in the Anegada Passage led to 12-meter-high tsunami waves hitting the U.S. Virgin Islands, but only 17 lives were lost. Less is known about the 1787 earthquake, but it was thought to have been of magnitude 8-8.5. It demolished the church in Arecibo and caused considerable damage to the forts of San Felipe del Morro and San Cristobal in old San Juan, breaking cisterns, walls, and guard houses. Geological evidence suggests the resulting tsunami was up 15-20 meters high and reached three kilometers inland.

While these events are possible and have happened in the past, they are not common occurrences. Most marine landslides are small and have little impact beyond their local environment and most earthquakes are so small that no one notices them.

In order to prepare for and to increase the potential to predict marine hazard events, we must first better understand these hazards. We can only do that by mapping the features, for a large-scale understanding, and getting eyes on the seafloor, like we have been during Océano Profundo 2015, to better understand the geologic setting in which these events occurred.