In a new article in the scientific journal Zootaxa, Christopher L. Mah describes 20 species of previously undescribed sea stars, including 12 species and 3 genera that are new to science. Among them are sea stars named after NOAA Ship Okeanos Explorer, NOAA Ocean Exploration’s recent campaign in the Pacific, and our partners in ocean exploration, the Global Foundation for Ocean Exploration. These superstars represent only a fraction of the sea stars discovered as a result of NOAA Ocean Exploration’s Campaign to Address Pacific monument Science, Technology, and Ocean NEeds (CAPSTONE) on NOAA Ship Okeanos Explorer in U.S. marine protected areas in the tropical Pacific Ocean between the Hawaiian Islands and American Samoa. 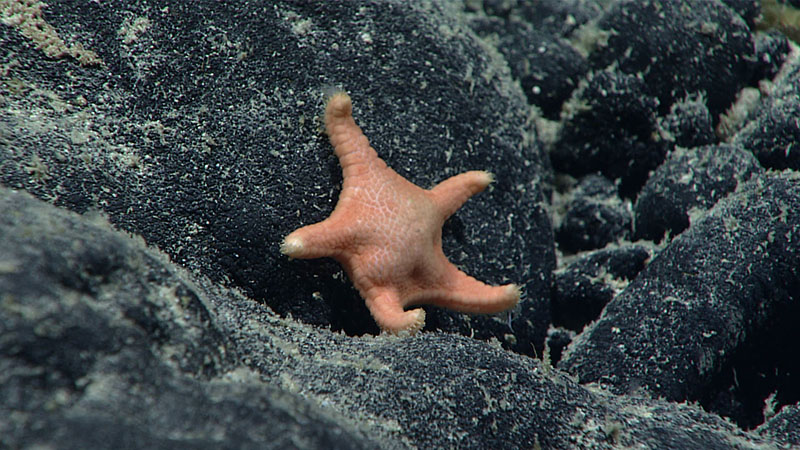 Okeanosaster hohonui represents a new genus and a new species and has a different structure than other sea stars in the family Goniasteridae seen at similar depths. It was named to honor NOAA Ship Okeanos Explorer. “Hohonu,” the Hawaiian word for deep, refers to the great depth at which the sea star was seen. The new sea star, seen here in the Musicians Seamounts in Papahānaumokuākea Marine National Monument Monument, was documented at depths ranging from 1,743 to 3,304 meters (1.1 to 2.1 miles). Image courtesy of NOAA Ocean Exploration, Deep-Sea Symphony 2017. Download largest version (1.1 MB). 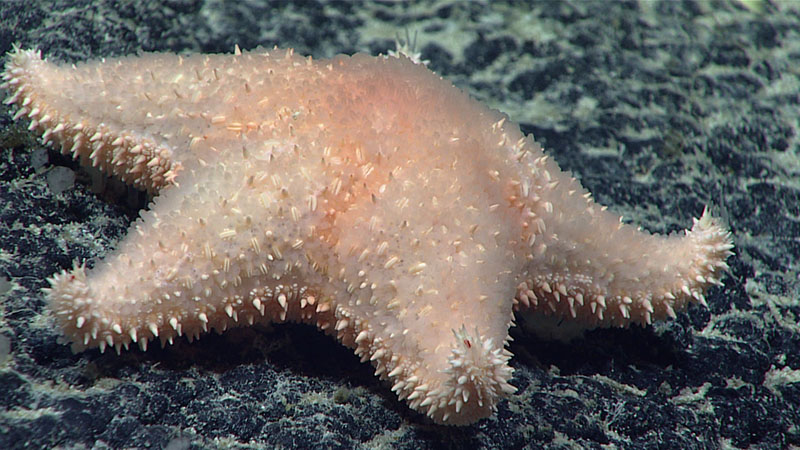 CAPSTONE marked the beginning of a new era of data collection for NOAA Ocean Exploration. The first expedition of the campaign in 2015 was the first on Okeanos Explorer to collect physical samples using NOAA Ocean Exploration’s remotely operated vehicle Deep Discoverer. And, these sampling operations have been proving their value ever since, helping us to identify and better understand deep-ocean ecosystems and the animals that live within them.

Biological sampling on Okeanos Explorer is conservative. Hundreds more sea stars were seen on video during CAPSTONE than were collected. This video provided useful new data about known but rarely seen species and likely also contains many more sea stars that are new to science, but remain unknown, for now. 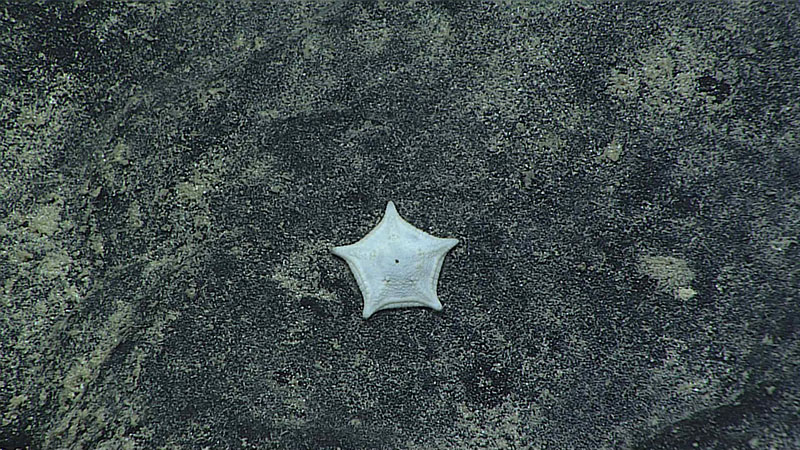 Litonotaster gfoei was named to recognize the efforts of the Global Foundation for Ocean Exploration, whose work with NOAA Ocean Exploration resulted in the collection of this new species. Though never seen in abundance, this small and evasive cookie star was seen throughout the North and South Pacific, from Johnston Atoll and Musicians Seamount to American Samoa, as seen here on Moki Seamount at 3,709 meters (2.3 miles) in depth. This is the first species of Litonotaster to be seen in situ and the second to be documented from the Pacific. Image courtesy of NOAA Ocean Exploration, 2017 American Samoa Expedition. Download largest version (1.5 MB). 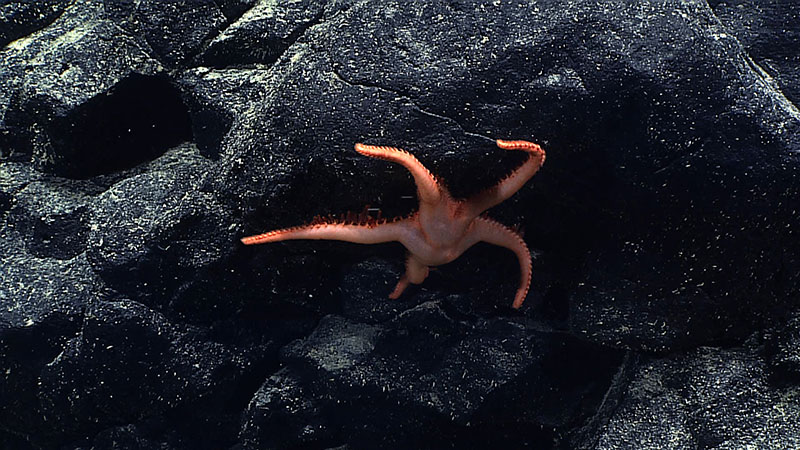 Heligmaster kanaloa represents a new genus and species of sea stars in the rarely encountered family Myxasteridae. Its name honors Kanaloa, the Hawaiian god of the ocean. This particular H. kanaloa was seen at a depth of 2,655 meters (1.6 miles) on McAll Seamount in the Hawaiian Islands. A second Heligmaster species was described based on a sample collected during an expedition on Exploration Vessel Nautilus. Heligmaster pele honors the Hawaiian god of volcanoes. Image courtesy of NOAA Ocean Exploration, 2015 Hohonu Moana. Download largest version (1.3 MB).

We know that sea stars, from the class Asteroidea, are vital members of their ecosystems. They exert significant influence on other species in waters both shallow and deep, especially as predators of sponges and corals. Still, there’s a lot more to be learned about sea stars, both known and unknown, how they interact with other ocean animals, and the important contributions they make to the marine environment. 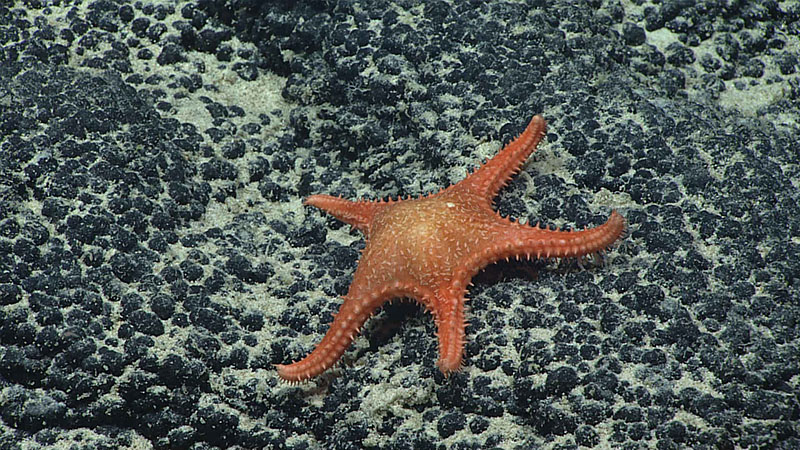 Evoplosoma nuku gets its name from the Hawaiian word for beak, “nuku,” as a nod to the jaw-shaped structures on the animal’s surface, which may be used for defense and/or predation. This spiky specimen was seen at 1,603 meters (1 mile) in depth on “Pierpoint” Seamount in the Johnston Atoll Unit of the Pacific Remote Islands Marine National Monument. Image courtesy of NOAA Ocean Exploration, 2017 Laulima O Ka Moan. Download largest version (1.3 MB). 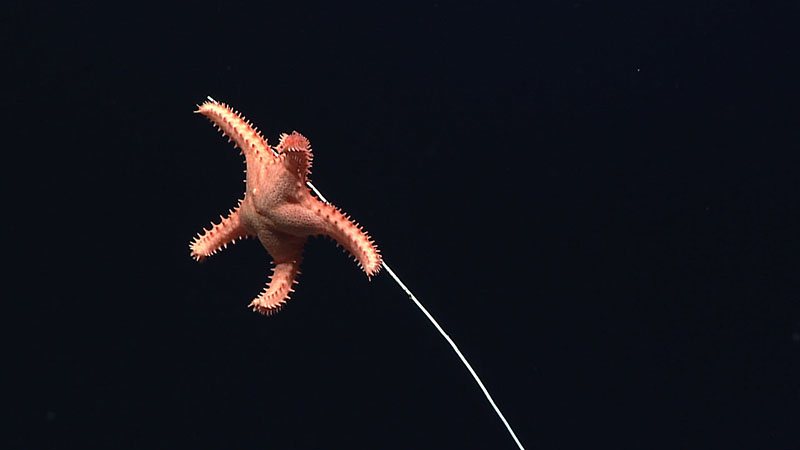 Atheraster symphonium represents a new genus and species of sea stars. The species name comes from the Greek word for “symphony” and represents the location where the species was collected: the Musicians Seamounts. This A. symphonium was seen at 2,497 meters (1.6 miles) in depth feeding on a bamboo coral on the McDonnell Guyot in the Wake Island Unit of the Pacific Remote Islands Marine National Monument. Image courtesy of NOAA Ocean Exploration, Deepwater Wonders of Wake 2016. Download largest version (307 KB).