Black in Marine Science (BIMS) created the BlMS Immersion Program (“BIP”), a week-long experience designed to reduce barriers that prevent Black, Indigenous, and people of color from entering the field of marine science. As SCUBA training and field internship experiences are often costly and out of reach for students from underserved and underrepresented communities, “BIP Week” (May 15-20, 2022) provided seven undergraduate students from across the country with training and licensure in SCUBA diving and several hands-on experiences in research, restoration, and conservation efforts in Miami, Florida and the upper Florida Keys. The program was supported by an Ocean Exploration Education Mini-Grant from NOAA Ocean Exploration and the National Marine Sanctuary Foundation. 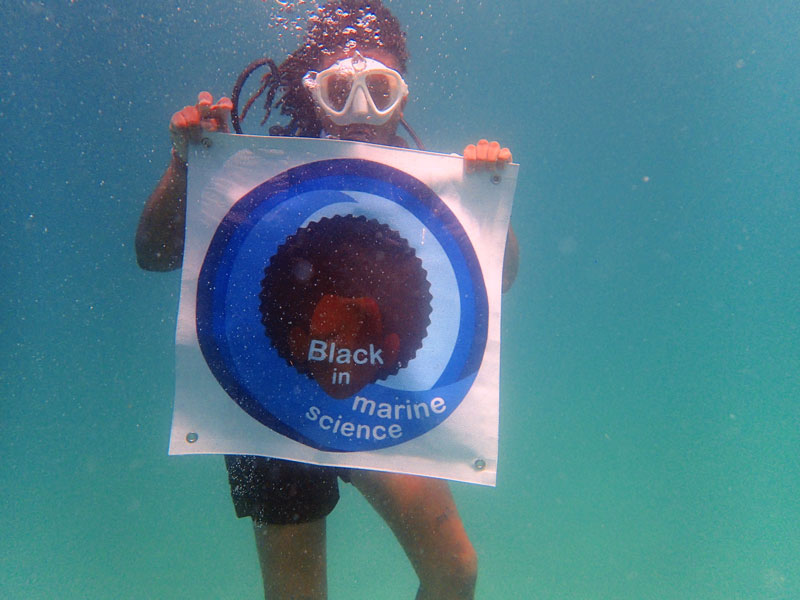 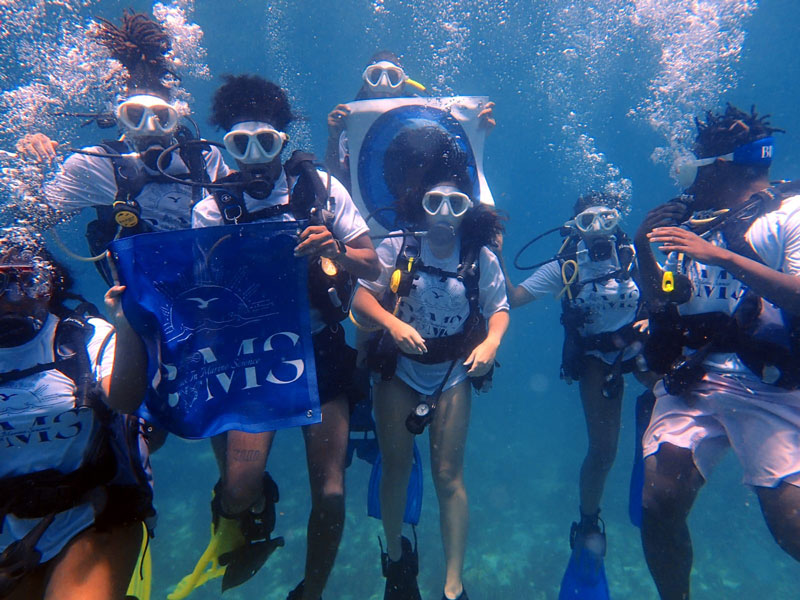 Prior to attending BIP Week, students completed SCUBA coursework so they could “dive right into action” during the program. Once everyone arrived in south Florida, SCUBA instructors from Junior Scientists in the Sea led students through skills checks in the pool and several dives around Miami and the Upper Keys resulting in seven newly certified SCUBA divers! Students applied their new skills to local coral reef restoration efforts by teaming up with the University of Miami’s Rosenstiel School’s Rescue a Reef program and helping place coral fragments on local reefs to grow. 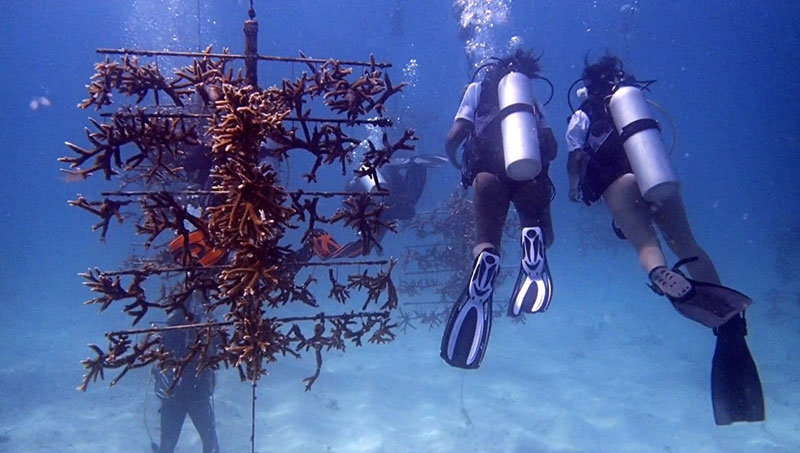 Their conservation work didn’t stop there, as students also assisted Debris Free Oceans in a mangrove clean-up on board kayaks. Together, students removed 40 pounds of garbage from the mangroves within 45 minutes. The group logged their findings in the NOAA Marine Debris Tracker to support long-term marine debris monitoring in the region. Students also engaged in shore-based conservation in the Upper Keys by partnering with Frost Science’s Museum Volunteers for the Environment to help restore local dunes. 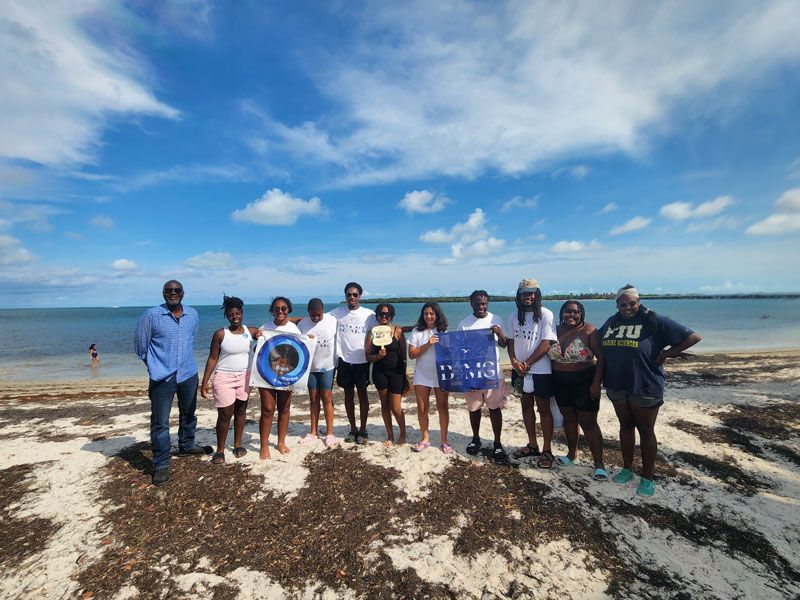 While in Florida, Black in Marine Science Immersion Program participants visited Virginia Key to learn about its history as a gathering place for African Americans who were often denied access to public parks and beaches in other areas. Image courtesy of Rose Santana. Download largest version (6.3 MB).

The ultimate goal of this project was to provide BIPOC students with marine science field experiences that inspire them to pursue careers in ocean science. An important component of this effort was connecting BIP Week students with local BIPOC leaders and science research facilities so students could learn about a variety of opportunities within the field of marine science and the diverse paths people take to work in those fields. In addition to the diving and hands-on conservation work, students toured NOAA’s Atlantic Oceanographic and Meteorological Laboratory in Miami and the University of Miami’s Rosenstiel School of Marine and Atmospheric Science where they heard from several scientists researching multiple impacts on coral reef health in South Florida. Students also spoke with NOAA Ocean Exploration Internship Program Coordinator, Trish Albano, a Rosenstiel School alumna, about student and career opportunities within NOAA Ocean Exploration. BIP Week wrapped up with one final hands-on experience where students joined the University of Miami Shark Research and Conservation Program for a day on the water tagging and releasing sharks. 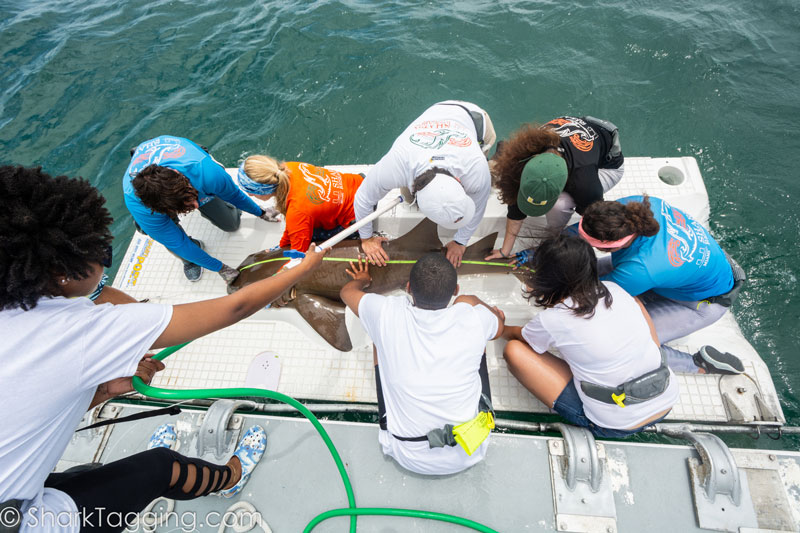 “Black in Marine Science South Florida Immersion” was supported by an Ocean Exploration Education Mini-Grant from NOAA Ocean Exploration and the National Marine Sanctuary Foundation. The Mini-Grant project launched in 2021 to engage and inspire the next generation of ocean explorers by advancing diversity, equity, inclusion, and accessibility (DEIA) efforts related to ocean literacy, stewardship, and workforce development. The BIMS project is one of seven that were awarded up to $25,000 to support underserved and/or underrepresented communities in engaging in ocean exploration career pathways and to build capacity for Science, Technology, Engineering, Art, and Math (STEAM) educators to bring ocean science and exploration alive in the classroom and beyond.