A Ship With Many Stories 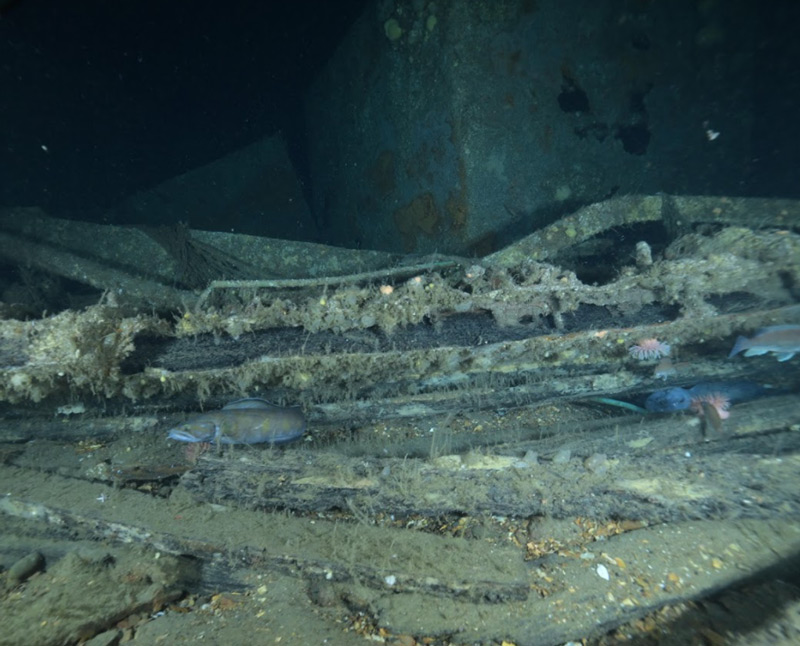 In this image of the shipwreck, metal tanks and debris (seen at the top of the image) remain nestled in position inside the wooden hull. The planking is also favored by some of the site’s marine residents. Image courtesy of NOAA/MITech. Download largest image (jpg, 182 kb).

Ships with long careers are somewhat of a novelty for maritime archaeologists. Often, seafaring vessels are built with a specific purpose in mind—cargo carrier, military craft, scientific platform. The vessel may be adapted or refit over time, but at some point in its career, reconfiguring a vessel’s form for a new function becomes too costly. Only under special circumstances do vessels experience a second, third, or fourth career. In first seeing these vessels, their construction characteristics—the arrangement of internal compartments, technologies from different eras, and the materials used—all contribute to understanding the many iterations of their working lives.

When the first image of the bow of the shipwreck we are investigating swam into focus in the topside control room, the project team was presented with one such site. The prominent bow, constructed from multiple layers of wooden planking covered by a thin layer of metal sheathing, was reminiscent of the sleek lines of a 19th century sailing vessel. Nestled inside the hull, however, were piles of I-beams, not-so-delicate metal plates, electrical junction boxes, and heavily corroded steel storage tanks. These features—all common of mid-20th century steel and iron ships—looked out of place for a wooden vessel. Had it not been for the slanted edges of the tanks, purposefully built to fit the contours of the ship’s hull they still rested inside, the differing components would have suggested two separate identities.

As remotely operated vehicle Pixel moved through the wreckage, the many layers of history on this vessel became apparent. Masts, davits, and deck fittings (evidence of the vessel’s sailing past) were scattered outside the hull; the wooden decks themselves having long since disintegrated. The presence of earlier vessel features such as the deck bollards (posts used to secure mooring lines on the deck) speak to their sturdy construction and continued value regardless of era. Within the vessel’s hold (a space reserved for storage), a much newer steel platform had been installed to support electrical wiring, interior passages, and an updated propulsion system. Evidence of these subsequent eras in ship design—wood followed by steel and sail and steam technology replaced by modern combustion engines—suggest this vessel evolved throughout its life to meet new needs in a changing maritime world.

The shipwreck site still requires additional research before a working hypothesis on its history and potential identity can be generated. Nevertheless, the visible construction characteristics identify the vessel as one that was upgraded and enhanced as novel maritime technologies emerged. A repair or major addition to any vessel requires a tremendous amount of resources, as well as a vision for the future. This vessel was not only repaired to stay in service, but enhanced to better serve its purpose. The eras of design characteristics are a library for understanding this site and those who served on board. Hopefully, with additional examination, their stories will yet be uncovered.