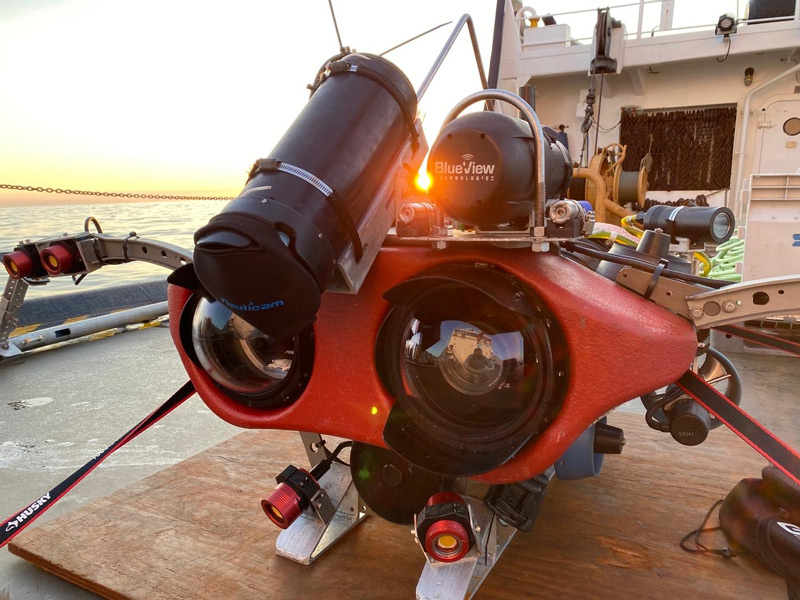 Piloting a small remotely operated vehicle (ROV) at sea on a large vessel in prevailing ocean currents can be “exciting” in the best conditions. Our ability to safely navigate the wreck with our ROV, Pixel, is entirely dependent on the ability of the ship and crew to keep station - which is accomplished through dynamic positioning (DP). After our last big ship experience where the ship lost its DP and pulled Pixel off the wreck, causing significant damage, we are always a little concerned when putting a tether-operated vehicle in the water on an unknown ship.

The captain and crew of our ship, U.S. Coast Guard Cutter Sycamore, said we should be able to hold position within one to two feet in the currents and conditions we were experiencing on site and, fortunately for us, they were absolutely right! The currents were such that without a top-notch DP system (and crew), we would have had a very difficult time getting to the wreck. However, we were able to call the bridge and move the ship any number of feet in any direction, which is ultimately how we would search for the shipwreck.

On Pixel we have Ultra Short Baseline (USBL) positioning. However, we found that after the first day, the positioning could be off by as much as 100 feet. This meant that every day, we had to search for the wreck site again. We would drop at our previous location and then move the ship in a slow search pattern while we scanned for the wreck using sonar on Pixel.

The currents were pretty strong and they were challenging for a small vehicle, but usually once we were on site, we could use the ship to position our lighting chandelier above or near the wreck and work pretty effectively. On small boats, we achieve this through a mooring system, but it is impractical for a large ship to temporarily moor in over 300 feet of water.

The bridge and deck crews worked great with our team and we had several days to work out all our systems - which was fortunate because on the last day, our tether was snagged in the wreck. Making things worse, Pixel blew a thruster while trying to maneuver the tether out of the snag and we found ourselves pinned down by tether and current – with swells increasing and a storm coming in! This could have been a bad situation had we been moored or in less-capable hands, but the ship was able to move very slowly to help pull the tether away from the wreck. Meanwhile, we maneuvered Pixel as best we could while the deck crew pulled up the chandelier to eventually clear the tether, and we were free!

With great team work all around, we ended our mission successfully, left nothing that was not already there, and took lots of pictures to tell the story!