Observations from the Buoy Deck of the USCGC Sycamore 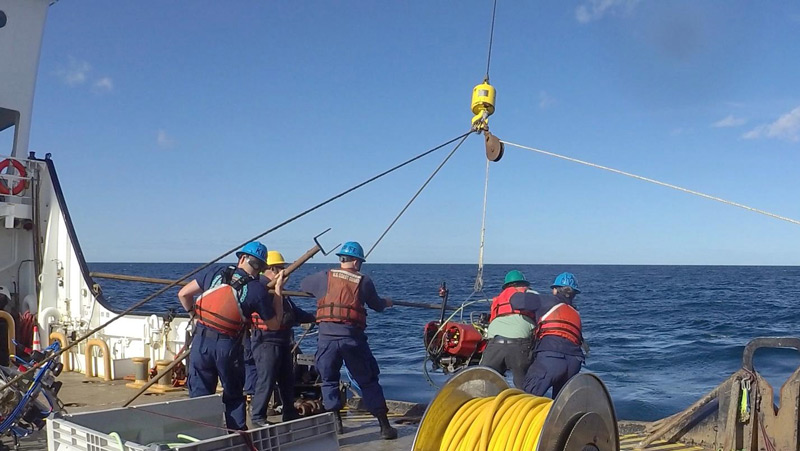 It’s a beautiful day. Warm, sunny, and the ocean is relatively peaceful. “Peaceful” defined from the deck of a 240-foot vessel is of a different scale than when watching a 4-foot remotely operated vehicle (ROV) next to the ship being tossed around like a toy. As I stand on the buoy deck of the U.S. Coast Guard Cutter Sycamore, eight feet below me is the remotely operated camera platform, Pixel. We’re out in the Atlantic Ocean surveying a shipwreck, hoping that when we finish, the wreck will be identified and the ending of her chapter will be written.

The ROV is done for the day and is coming back onto the ship for the night—preferably without any dents, cracks, or shattered cameras. She’s a 300-pound scientific instrument, being heaved about by the waves, next to a ship weighing 1,900 tons.

As I lay on the deck and stretch out over the side of the ship to attach the ROV retrieval hook, I feel a hand grip my life jacket. This deck has no railing nor safety barrier, as they would only get in the way of the ship’s primary purpose of servicing marine navigation buoys.

The hand that grips my life jacket belongs to one of the many enlisted Coast Guard personnel on the deck making the daily ROV launches and recoveries possible. Right now her job is to keep me from losing my balance and going overboard. Next to me is a deckhand pulling in the ROV’s tether, gauging the ebb and flow of the waves so that he is not yanked overboard when the waves pull the 300-pound ROV away from the ship. He too is steadied by one of his shipmates. Two other deckhands operate the capstan, timing the lift of the ROV with the swell of the waves. Two more stand by with boat hooks to capture the swinging ROV, preventing her from careening into the side of the ship, or worse, into a shipmate. The crane operator’s eyes are locked onto the hands of the Master Chief as he directs the crane to bring the ROV up and onboard. As the ROV crosses over the deck, a dozen hands steady her as she is lowered and latched down.

A typical day for this team is spent retrieving and deploying six-ton navigation buoys. The steel and chain of these massive buoys is countered with overwhelming force and controlling restraints. ROVs are aluminum, glass, and fiber optics, requiring dexterity, timing, and finesse. Hesitant at first, this team has learned how to be gentle. They have adapted to handling an object that can easily be damaged. By the third ROV launch cycle, it’s become routine. Every person has their station. Every person knows what to expect.

Next week they will return to their typical missions. They will use brute force and mechanical advantage to wrestle metal behemoths onto the deck for repair or replacement. They will remember that they are once again the fragile objects on the deck. But this week, they were able to be gentle.