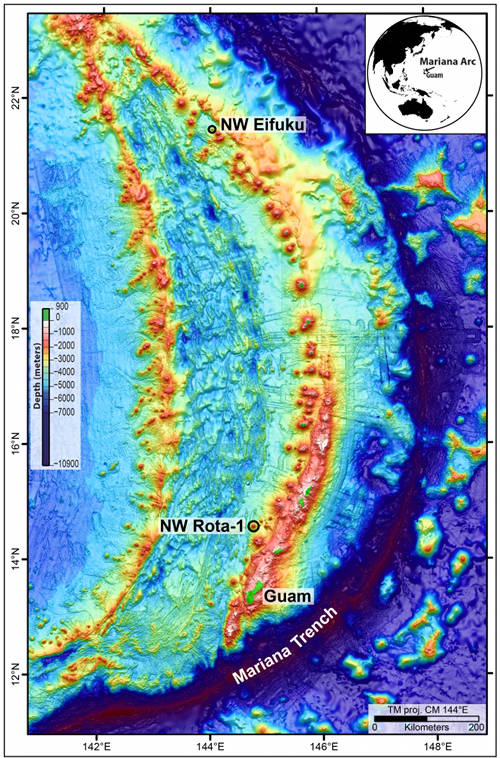 A key purpose of the NOAA Office of Ocean Exploration and Research (OER) is to investigate the more than 95 percent of Earth’s underwater world that, until now, has remained virtually unknown and unseen. Such exploration may reveal clues to the origin of life on Earth, cures for human diseases, answers on how to achieve sustainable use of resources, links to our maritime history, and information to protect endangered species. The Submarine Ring of Fire 2014 - Ironman expedition offers a unique opportunity for explorers of all ages to investigate the unknown and poorly known areas of the Pacific Ocean.

The Submarine Ring of Fire 2014 – Ironman expedition will take place in two parts. The first part of the expedition will focus on iron-oxidizing bacteria at hydrothermal vents and understanding the ecology of microbial mat systems driven by a novel class of microbes called Zetaproteobacteria. The second part of the expedition builds upon previous OER Submarine Ring of Fire explorations. This work will focus on understanding how the emission of carbon dioxide (CO2) from active submarine volcanoes acidifies the local marine environment, and how that in turn affects the unique biological communities living around the vents.

Using the R/V Revelle and the Jason remotely operated vehicle (ROV), most of this expedition will be spent at two seamounts in the region of Marina Arc in the western Pacific Ocean: NW Eifuku and NW Rota.  The uniqueness of these locations led to their inclusion as part of the Marianas Trench Marine National Monument. 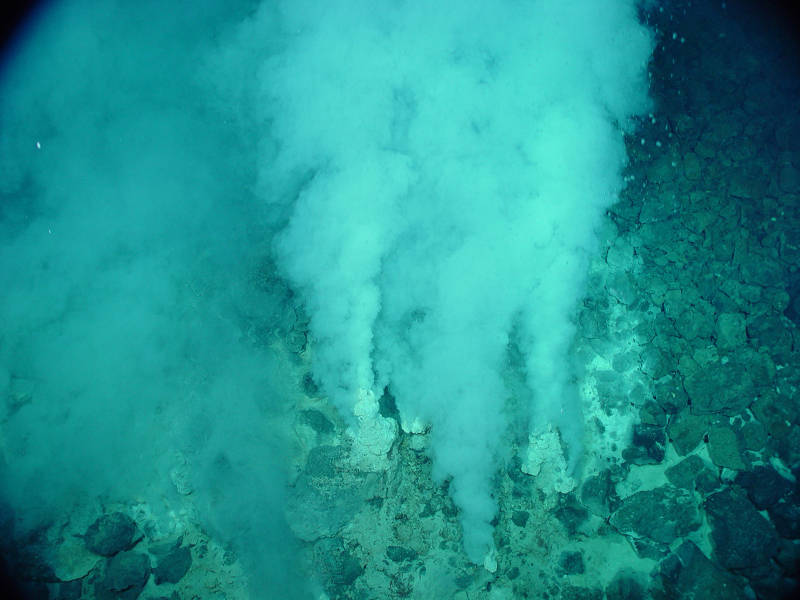 Microbial mats thicker than one meter were found at NW Eifuku in 2004 and these will be the primary target for the first part of the expedition looking at iron-oxidizing bacteria and microbial ecology. Scientists plan to investigate the hypothesis that specific iron-oxidizing bacteria are acting as ecosystem engineers, providing the organic carbon for other microbes and animals. In the absence of photosynthesis, these microorganisms get their energy through the oxidation of reduced chemicals coming from hydrothermal vent fluids.

NW Eifuku is also unique because, due to the high pressure at depth, it vents CO2 as a liquid, its CO2 output is the highest of any submarine hydrothermal site in the world, and because it hosts a dense biomass of chemosynthetic mussels. This combination makes it an extraordinary natural laboratory where the effects of natural ocean acidification on marine ecosystems can be studied.

While visiting NW Eifuku, a team of geologists and chemists will sample microbial mats and vent fluids to determine the chemical environment of the iron-oxidizing bacteria; look at the plumes of acidic waters in relation to CO2 vents and the surrounding communities; perform incubation experiments on the seafloor to determine the effects of acidic conditions on mussel growth; and map the summit of the seamount.

The second focus site, the NW Rota-1 seamount 100 kilometers north of Guam, is one of only two sites in the world where active volcanic activity has been observed underwater. Previous visits have documented a dynamic and diverse range of eruptive activity, including explosive bursts of lava and large amounts of CO2 emitted as bubbles, and a chemosynthetic biological community thriving in this harsh environment that is dominated by two species of shrimp.

During this cruise, explorers will compare several different methods of quantifying the amount of CO2that is being emitted by the volcano. This will also help to understand Earth’s natural contributions to ocean acidification.

A secondary goal is to explore what changes have taken place at the volcano since a major landslide in 2009, particularly to the local chemosynthetic ecosystem. The landslide destroyed old vent habitat but also created new habitat. Interestingly, this event nearly wiped out one species of shrimp and seemed to favor the other, but we don’t know what changes have occurred here since our last visit in 2010.

NW Rota-1 is an ideal site for this project because its CO2 emissions create extreme levels of acidification locally, and because the site is so active and dynamic that it is a unique place to study ecosystem response to physical and chemical disturbance.

To date, there has been no systematic attempt to quantify NW Rota’s chemical outputs, especially those of CO2 and iron (Fe). Recent studies suggest that hydrothermal Fe is transported great distances in the ocean, ultimately upwelling to the surface and enhancing primary productivity and carbon uptake. Meanwhile, volcanic CO2 acidifies the surrounding ocean environment impacting local ecosystems. While testing new and recently developed technologies for remotely calculating volcanic CO2 input to the ocean, this study will help us understand Earth’s natural contributions to ocean acidification.

(1) Multibeam sonar will be used to resurvey the bathymetry and image the CO2 bubble plumes in the water column. Because bubbles provide excellent acoustic reflectors, this makes it possible to detect and map bubble plumes rising from the seafloor in three dimensions, and to quantify their size, shape, intensity, and changes over time.

(2) A Conductivity, Temperature, and Depth (CTD) sensor will be deployed to collect water column chemistry data around the volcano to define the impacts of the CO2 bubble plume. These plumes are typically examined using a CTD-rosette package where on-board sensors are used to detect plumes and allow water samples to be collected and chemically analyzed. Samples will be analyzed for particulate metals as well as for dissolved Al, Fe, Mn, pH and total CO2.

(3) Two hydrophones will be deployed at NW Rota to record the sounds of the CO2 emissions, which can then be used to estimate the CO2 output using a new acoustic quantification technique. One hydrophone will be deployed on the seafloor by the ROV Jason within 100 meters of the eruptive vents. It will record sound during the three days the ship is on-station and will be recovered by the ROV at the end of the last dive so that the data can be quickly used for comparative analysis. The second hydrophone will be a moored system that will stay deployed at NW Rota for at least a year, to provide a longer time-series of observations and to explore how the volcano’s activity varies over months to years.

(4) The Jason ROV will make dives to the eruptive vent to ground truth the activity and bubble output at the eruptive vent and to observe changes in the hydrothermal systems and their biological communities. Visual observations will be made on the seafloor to identify the location(s) and relative intensity of eruptive activity and CO2 degassing.

This expedition will further our understanding of these deep-sea macro- and micro-biological habitats and how they are being impacted by the poorly understood process of ocean acidification.