Given the complexity of the logistics involved in the Submarine Ring of Fire 2012 expedition, an apt summary of the cruise is “Whatever could go wrong didn’t go wrong“. Twelve dives at nine sites were successfully made, with 98.5 hours of bottom time and 164 samples for geology, chemistry, biology and microbiology. The remaining days were used for maintenance, transits and for other operations during one period of weather downtime. With the exception of a navigation issue which created some downtime during early dives, the vehicle and topside operations worked remarkably well, given that the Quest 4000 had never operated on a U.S. research vessel previously. This is a testament to the excellent cruise preparation by the Scripps Marine Operations group and the skill and cooperation of the crew of the Roger Revelle and the Quest 4000 team.

The twelve dives were each made between 8am and 9pm, local time. Normal night operations included geophysical surveys using the ship’s magnetometer, gravimeter and multibeam, and/or CTDO casts or tows mostly in the NE Lau. The geophysical surveys focused on Niuatahi, Niua and the Matas. Two new active hydrothermal sites were located during the CTDO surveys, one on the southernmost Fonualei spreading center and the second in the Mangatolu Triple Junction region. Additional targets remain in the Mangatolu Triple Junction region and our findings there suggest that the entire region contains an extraordinary amount of magmatic activity. The hydrothermal vent-endemic biology varied from site to site with species of shrimp, long-necked barnacles, mussels, snails, polychaetes and fish being the most visually obvious fauna. One type of tubeworm was found in low densities at the Niua North site.

Slideshow of highlight images corresponding to each of the ROV dives of the SRoF '12 expedition. 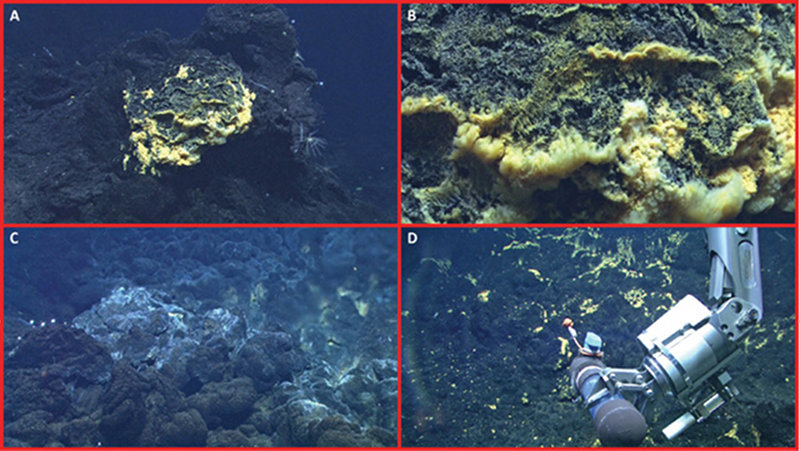 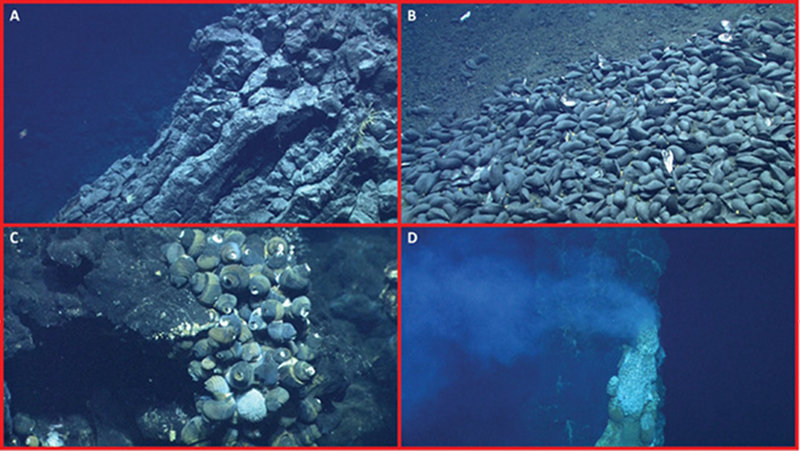 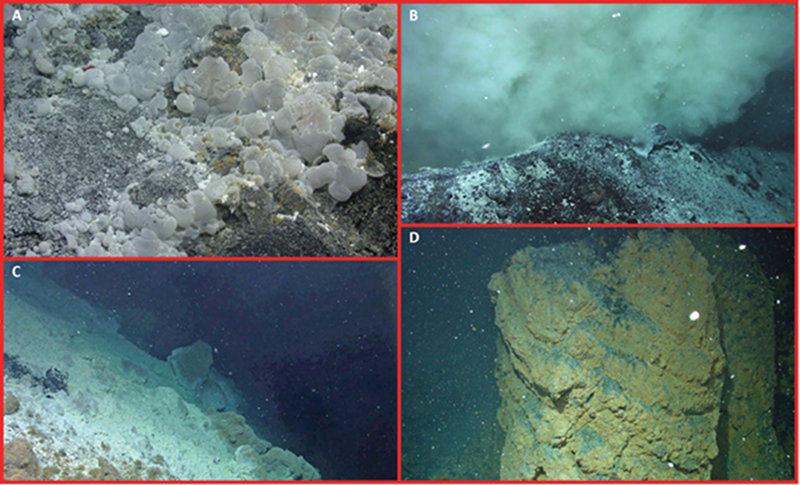 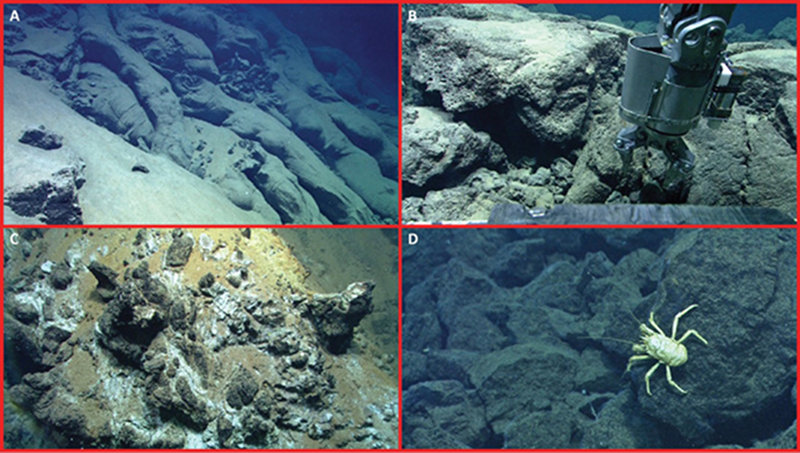 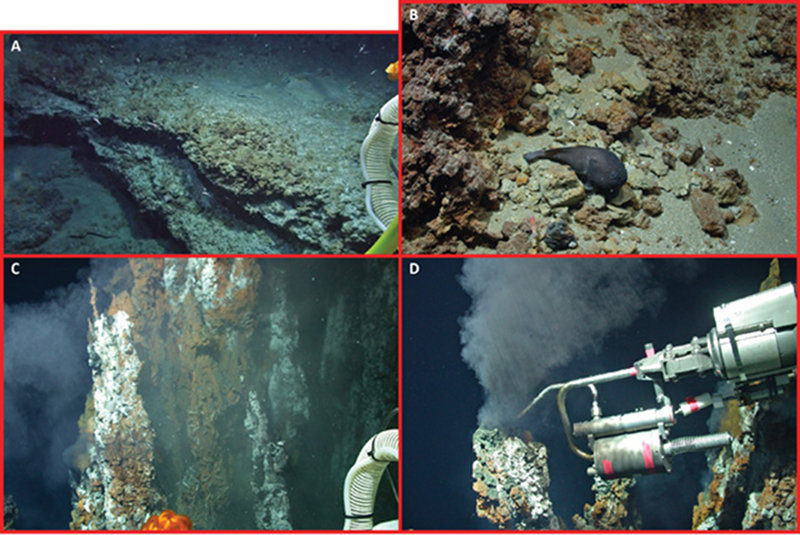 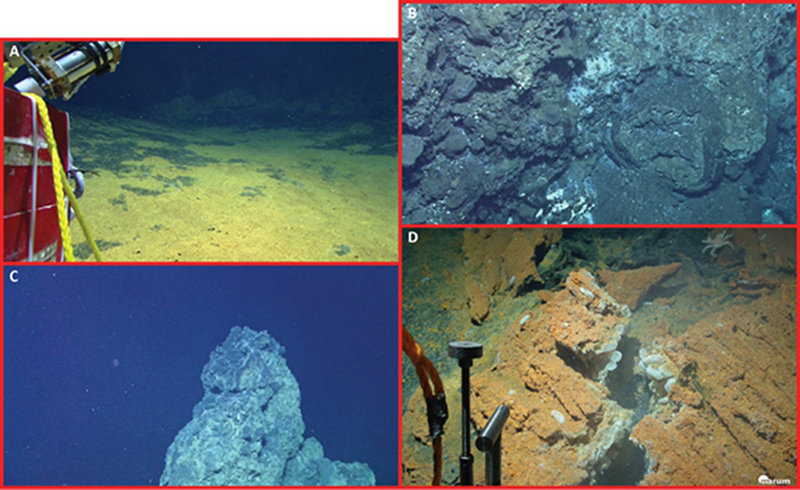 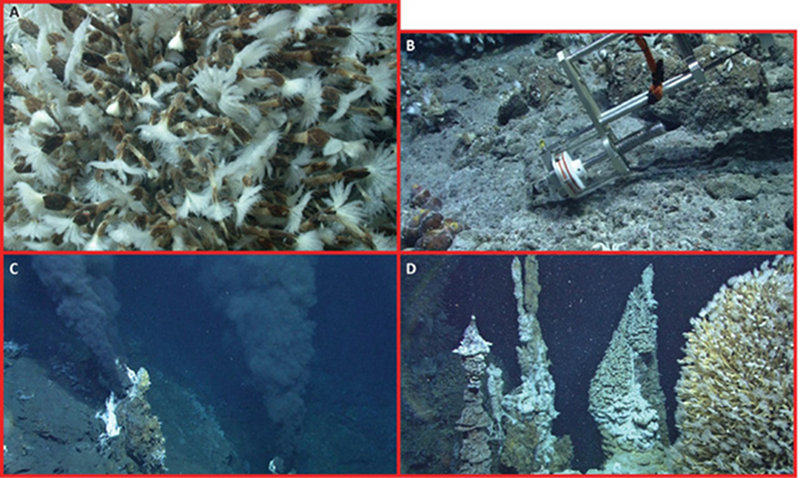 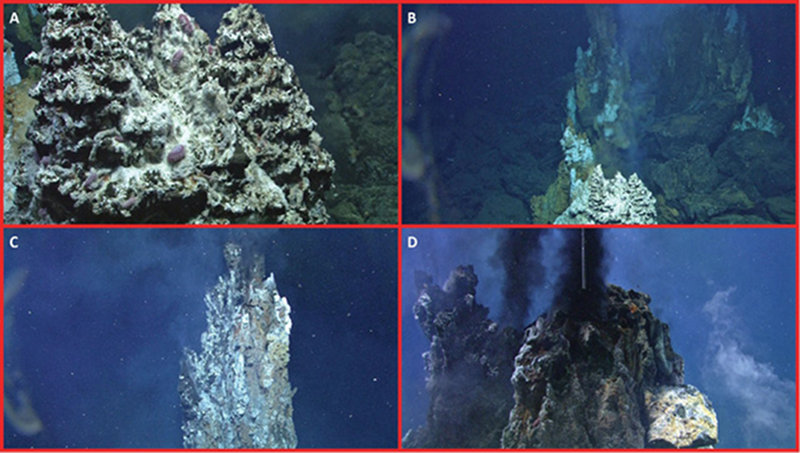 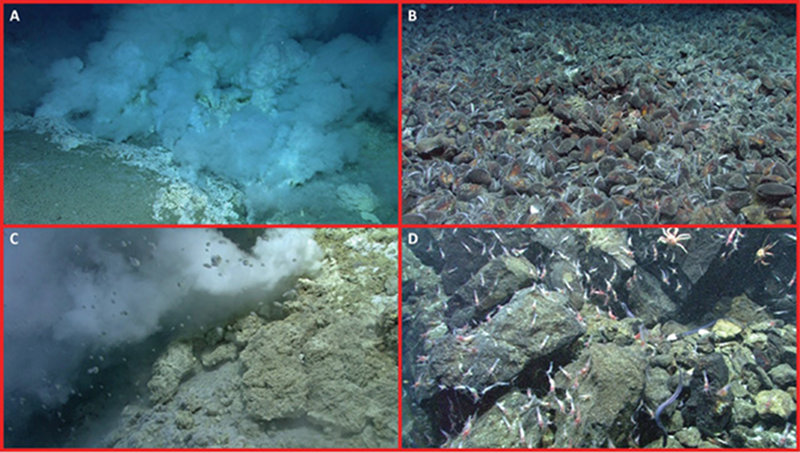 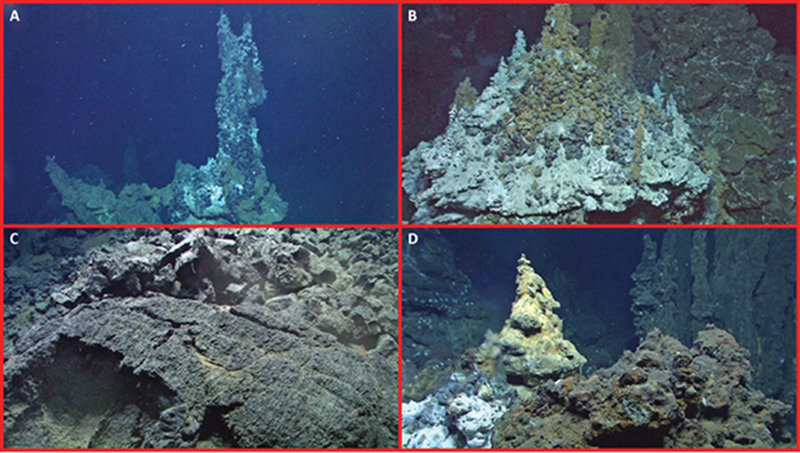 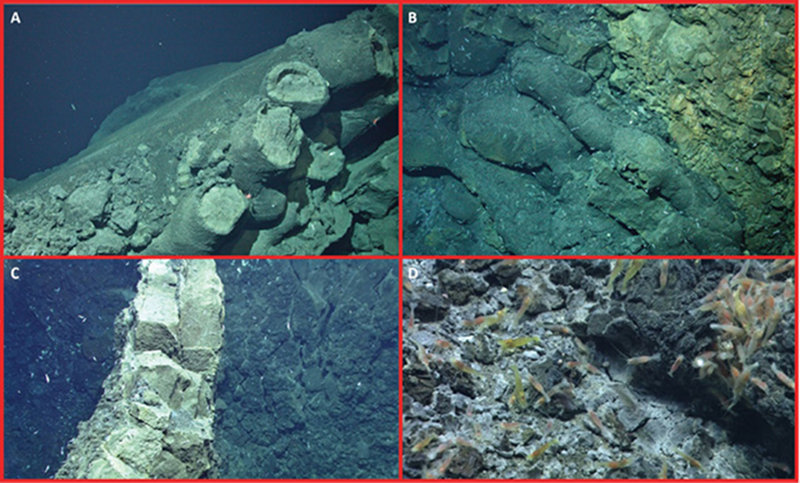 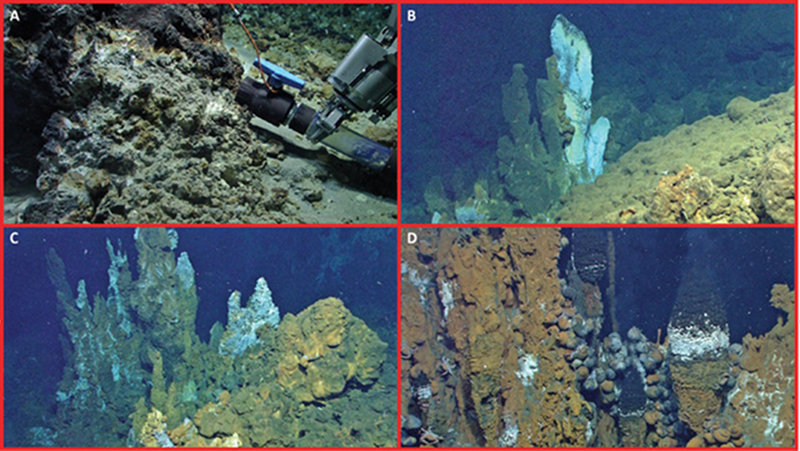 After testing systems on a 1.5 day transit from Suva, Fiji beginning September 9, the first dive (Q-322) began as scheduled on Sept. 12. This dive had the specific objective of intensive sampling of an iron-manganese microbial ‘mat’ that had been discovered there in 2005. Dr. Bradley Tebo headed a team from Oregon Health and Sciences University (OHSU) that used specialized samplers at the site to collect several samples of the mat. On the day-long transit northward to the South Fonualei rift, two CTDO stations were completed and the multibeam system was used to collect data on unsurveyed areas.

The second dive (Q-323) on September 13 was made on the large central volcano at the southernmost end of the Fonualei Rift zone, the easternmost spreading center of the northern Lau basin. Some large spires near the summit with no hydrothermal indicators proved to be lava spines. Some active low-temperature diffuse sites and smaller chimney were sampled nearby. There was also a large bed of dead mussel shells coated with manganese that bespoke of an extensive recently active diffuse vent field. A deeper site on the NE flank was visited after a ~2-km traverse northeast and downslope through the water column. Here, the tall spires identified on a previous survey map were found to be a group of very tall (up to 30 m), active, high temperature chimneys (254°C measured).

The remaining dives of the expedition were located within the area of the Northeast Lau Basin. The first of these (Q-324) on September 14, targeted the young Motutahi cone within the large caldera of Niuatahi volcano. Previous work here showed that the cone was in a state of magmatic degassing. A degassing sulfur pit emitting diffuse fluids was discovered at the summit of the cone at ~1250 m, but there was little macrofauna in its immediate proximity. Large amounts of polysaccharide “sacs“ were observed in the peripheral area of the pit and some shrimp and polychaetes were found downslope at ~1295 m.

The September 15 dive (Q-325) was the first attempt to locate the hydrothermal system at Mata Ua volcano. The Quest-4000 searched the southern and western portion of volcano, but time ran out while surveying the NW flank where biologic indicators hinted at a large active site nearby. A CTDO tow on September 18, along the NW flank of the volcano confirmed the presence of a high-temperature site slightly deeper than where the dive had ended. Deeper exploration on September 20 (Q-328) discovered an extensive hydrothermal field on the steep slope. Prolific long-necked barnacles and other vent animals colonized the slope and older sulfide chimneys and several black smokers were discovered and sampled in a depth range of 2397-2356 m. At least two of the smokers appeared to be boiling. The maximum temperature recorded was ~360°C, but it could have been hotter (boiling at this depth would be approximately 380°C). This was the hottest site in the NE Lau to date.

The first of two dives at Niua South took place on September 18. Q-326 began in a previously unexplored small pit located near the SW corner of the southernmost large pit. Here we discovered diffuse venting in sedimented old volcanic terrain highlighted by pumice flows on the walls of the pits. After sampling the small pit we transited to the southernmost large pit and sampled one of the numerous active black smoker mounds, named Adelaide, where the dive terminated. A return dive (Q-333) on September 25 collected additional Mn-coated pumice samples for the OHSU group with their specialized tube samplers. The remainder of time on that dive was used to further explore the larger pit visited on Q-326, where numerous smoker chimneys and extinct sulfides were observed.

The dive on September 19 (Q-327) was the first at West Mata volcano since the 2009 response cruise that discovered an active eruption and took extensive observations and samples in the summit region. Samples were collected and observations made of the post-eruptive ecosystem. No sign of eruptive activity was observed during the dive, consistent with water column measurements made on the cruise. Two small hydrophones were deployed for the duration of the dive at Luo vent on the SW portion of the summit ridge, which did not record any eruption signals. A second dive (Q-332) on September 24 confirmed that the pit was fully enclosed and likely collapsed during or after the cessation of eruptive activity. The ecosystem at West Mata was dramatically changed from the relatively sparse single shrimp species population observed in 2009 to multiple species of shrimp swarming in high- density clusters over the summit region. In addition, other motile species including scale worms and crabs had colonized the volcano.

Our dive on September 21 (Q-329) explored the hydrothermal systems at Mata Fitu, the northernmost of the northern Matas. The dive started to the south of our camera line and sampled lavas in several places. Here, an unusual ridge of broken lava was interpreted to be an old fault structure. The ROV then moved upslope and discovered the first active chimney field at ~2585m. Several lines of smokers were found, two of which were quite active. The deepest site discovered on the expedition and hottest site at Mata Fitu was a 16-m high chimney, at 2644 m (base) and 331°C.

The only dive to the Niua North site took place on September 22 (Q-330). Our initial target turned out to be a sulfur pit that was similar to, but venting more intensely than, the one discovered on Q-324 on Motutahi cone. It also had a more robust biologic community on its periphery, including shrimp, solitary tubeworms, mussels, snails and other vent-endemic life. Droplets of liquid CO2 were being emitted from the pit. Diffuse venting supported the large area of mussels and other vent fauna seen on the camera tow at the summit of the ridge ~200 m from the pit. At the end of the dive a previously-mapped small ridge or dome was sampled and determined to be an outcrop of rhyolite. Additional mussel beds were found here also. Niua North, with its profuse venting of magmatic gases and sulfur volcanism, contrasts dramatically with the (presumably) more deeply “rooted“ Niua South magma source with its extensive black smoker vent fields.

The final site on the northern Matas was the summit of Mata Tolu where a dive (Q-331) was made on September 23. Mata Tolu is the shallowest of the northern Matas with a summit depth of ~1815 m and characterized by short rift zones extending southwest and northeast. The dive began ~150 m south of the summit and after obtaining some rock samples, quickly traversed to the sulfide area. The remainder of the dive mapped out the sulfide structures and obtained samples for the various disciplines. The hydrothermal area was a mixture of active and inactive structures with a maximum recorded temperature of 271°C. It appears that Mata Tolu, like Mata Fitu and Mata Ua, has had a long phase of hydrothermal activity following cessation of volcanism and development of crustal fracturing by continuing tectonic activity.

Following the end of Dive Q-333 at Niua South (above), the R/V Roger Revelle transited to Apia, Samoa. The ship arrived on the morning of September 26, marking the end of this year’s compelling and productive Submarine Ring of Fire expedition.