Beyond safe scuba-diving depths, in ranges from about 30 to 150 meters (98 to 492 feet), coral reef communities continue to persist under extreme environmental conditions. These communities are less impacted by stressors than their shallow-water counterparts and may represent important “seed-banks” for potential reef recovery. Recently, there has been interest in exploring these deep reef ecosystems.

Recent work by our group has begun to describe the structure and function of the mesophotic coral reefs (MCRs) of the Caribbean. The MCRs are light-dependent coral communities that occur in the deep half of the photic zone. However, more work is warranted at sites around the world so we can gauge the novelty and importance of these light-dependent ecosystems, as well as assess the similarities/differences of these deep-reef communities.

Our current understanding of the benthic (seafloor) community structure of deep reefs is based on studies in the Bahamas and Cayman Islands and focuses on depths to 100 m (328 ft). These data suggest long-term community stability, as well as increased sponge diversity and density (as their particulate food increases with depth). The coral biota, which is reduced in diversity at increased depths, includes important deep, low-light-adapted hermatypic species (e.g., Montastraea cavernosa and Agaricia lamarckii) and some endemic deep-reef species (e.g., Leptoseris cucullata and Oculina vericosa), as well as several unusual octocorals.

Sponge biodiversity on the deep reefs of the Bahamas and the Cayman Islands includes an endemic fauna not even found on shallow reefs at the same location, exhibits some degree of site-specific variability, and contains species in common with the shallow reefs, nearshore caves, and the deep sea. Many of these sponges contain novel biotechnological uses due to their physiological adaptations to the extreme deep-reef conditions. When we compared these sponges to their shallow-water counterparts, we found increased bioactivity with depth and a greater diversity of potential drugs from the sea.

In contrast to Caribbean deep reefs, Indo-Pacific deep reefs may (as some evidence suggests) have higher biodiversity and endemicity, as well as highly structured coral ecosystems supporting algae and fish. The goals of the Reefs of Palau project were to explore Pacific deep reefs to determine: 1) whether these unique ecosystems are structured like their Caribbean counterparts, 2) what factors affect the distribution and abundance of Pacific deep reef species, and 3) how adaptation to deep-reef conditions in the Pacific affect biotechnological resources produced by these species. These data have important implications for coral reef managers (relevant to the protection of these relatively unknown ecosystems) and for their use in drug discovery efforts.

This map shows the small Pacific islands whose coral communities have been studied during this, and previous explorations. Image courtesy of Pacific Deep Reefs 2011 Exploration, NOAA-OER. Download image (jpg, 35 KB).

The Indo-Pacific region is the largest biome on the planet (and it exceeds the landmass of all continents combined), so a comparative approach needs to address the issue of variation between islands, as well as variation within an island. Thus, our group has conducted qualitative surveys in Chuuk, Guam, and Pohnpei, and quantitative surveys throughout Palau (see map). These islands represent “stepping-stones” of biodiversity across the Pacific Ocean basin, and include a variety of physical habitats and conditions that likely impact the nearby shallow and deep coral-reef communities.

While there are significant differences in the total number of resident species within the island coral-reef ecosystems, there are also some interesting generalities. We found the deep reefs exhibited a reduction in coral cover with depth (and lowered light), and this was offset with increases in sponge biodiversity and percent cover. In some cases, high nutrients associated with anthropogenic run-off led to a deep reef community dominated by macro-algal species.

Finally, as in the Caribbean, Pacific deep reefs are also sources of unique biotechnological products that have potential uses as new drugs from the sea. In the coming months we will further analyze our data to develop a universal model of deep-reef structure and function. 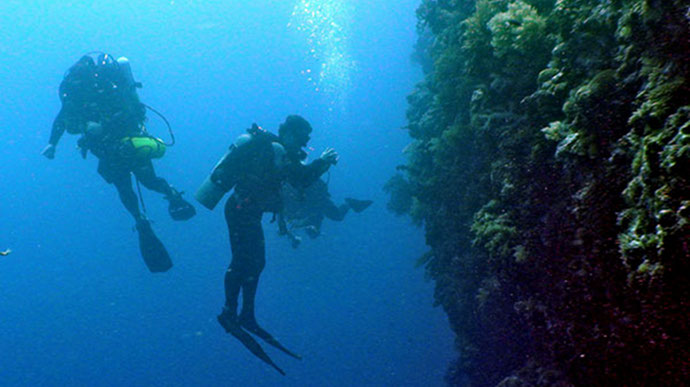