A science team on the research vessel R/V Seward Johnson departed from Fort Pierce, Florida, in early July and headed for the eastern Gulf of Mexico. The researchers are using a submersible, a remotely operated vehicle (ROV), and other technology to assess and record conditions in the water column and on the seafloor to gather baseline data along Florida’s shelf edge.This mission, which scientists have named Florida Shelf Edge Exploration (FLOSEE), was unplanned. It is part of NOAA’s response to the Deepwater Horizon/BP oil spill, which started April 20 and continued into July.

Members of the news media aboard research vessel (R/V) Seward Johnson check out the ship’s submarine. The media was invited to help explain to the public some of the science behind NOAA’s Deepwater Horizon response efforts. Image courtesy of Keeley Belva, NOAA Office of Exploration and Research. Download larger version (jpg, 1.5 MB).

Scientists launch the CTD rosette that will take water samples and measure conductivity (or salinity), temperature, and depth. Scientists use these samples to calibrate the oxygen and salinity sensors and to measure for petroleum products, plankton, and bacteria. Image courtesy of Keeley Belva, NOAA Office of Exploration and Research. Download larger version (jpg, 1.2 MB).

The FLOSEE expedition will help provide a better understanding of the spill’s actual and potential environmental effects. Researchers are observing corals and other bottom-dwelling species to establish benchmarks for measuring change that may result from the oil and chemicals used to manage the spill. The team will also assess water quality and the abundance and diversity of life from tiny plankton to the larger species that depend on corals for survival. 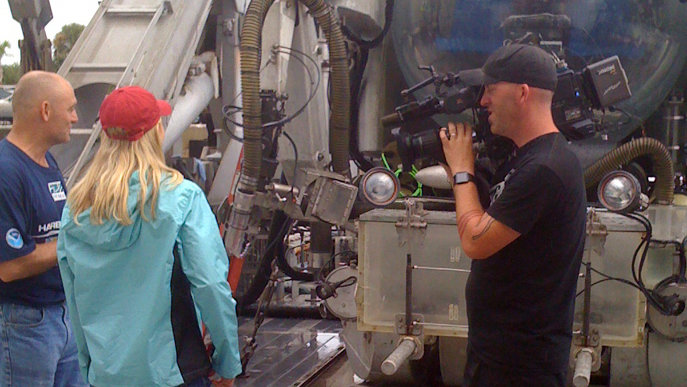