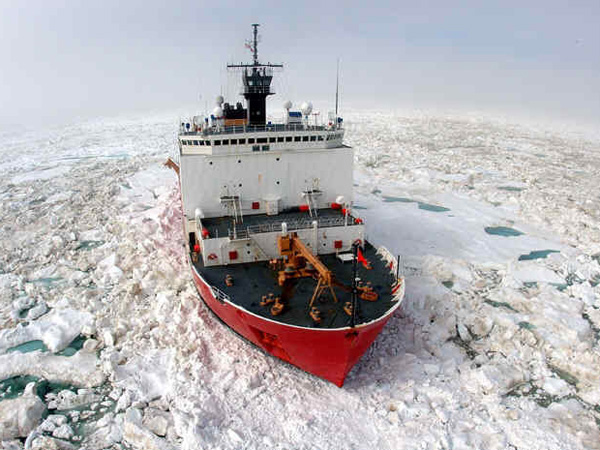 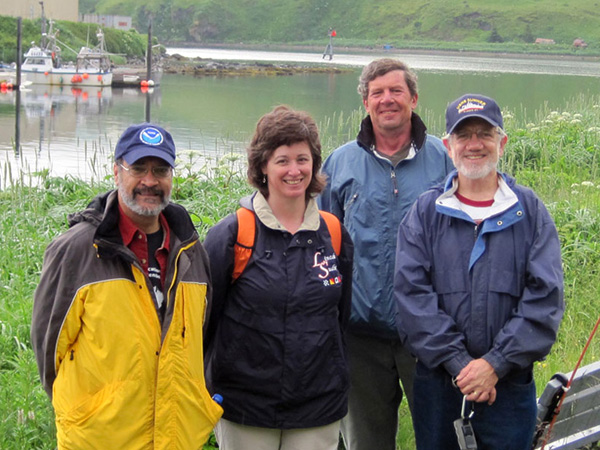 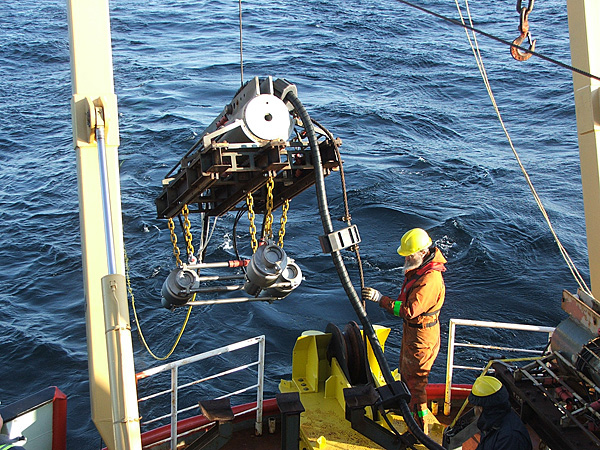 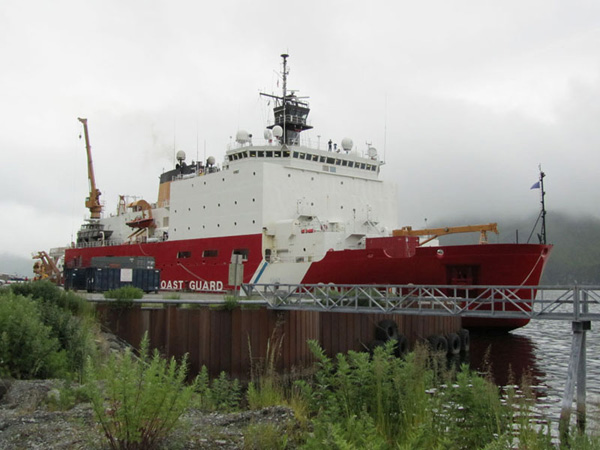 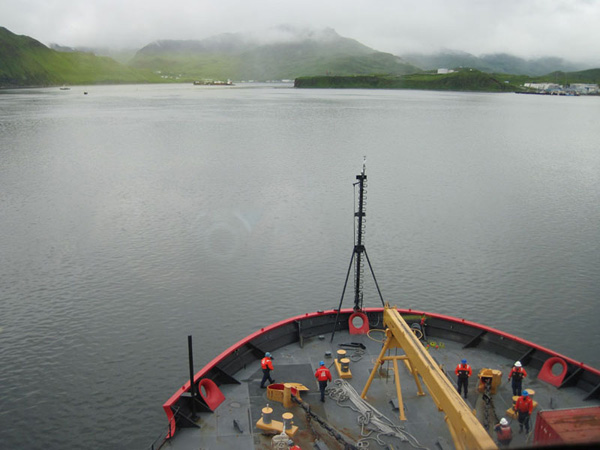 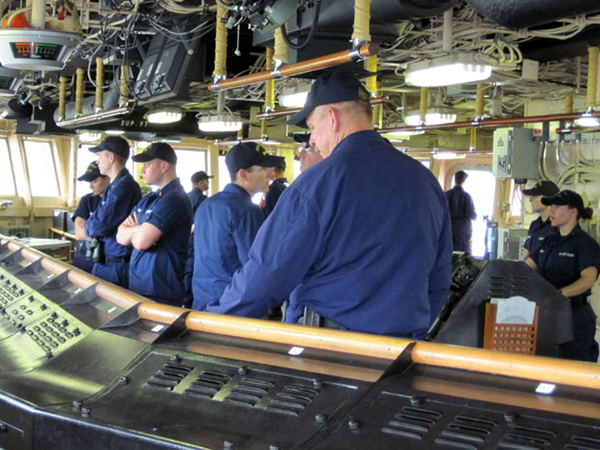 Conning officer Nick Custer (in doorway, monitoring the ship’s position as it moves away from the dock in Dutch Harbor) calls commands to helmsman Dierdre Gray (far right), who repeats and executes each command. Only two or three watchstanders are required when the ship is underway, but the bridge is busy with additional personnel during arrivals and departures. Image courtesy of Helen Gibbons, USGS/ECS Project. Download image (jpg, 132 KB). 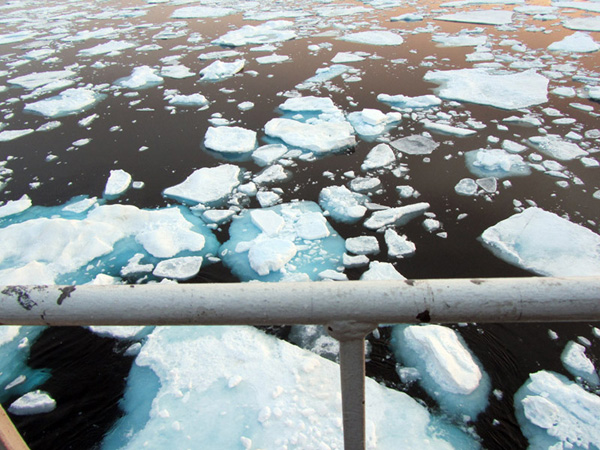 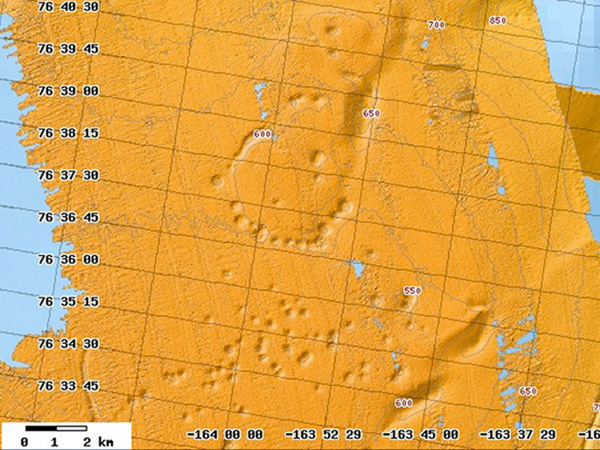 Although Steve likes to call this an alien landing site, the pockmarks are probably the result of hydrocarbon seeps on the seafloor. This image is from the Chukchi Plateau, about 130 km east of the U.S.-Russia border. (Data collected during previous Healy missions HLY0302, HLY0703, and HLY0905) Image courtesy of Pacifc Deep Reefs 2011 Exploration, NOAA-OER. Download image (jpg, 159 KB). 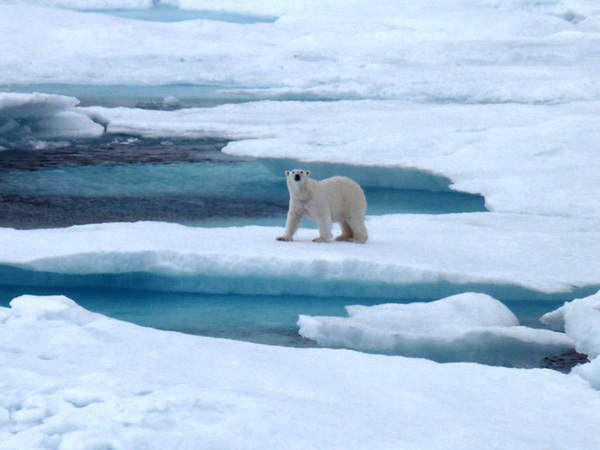 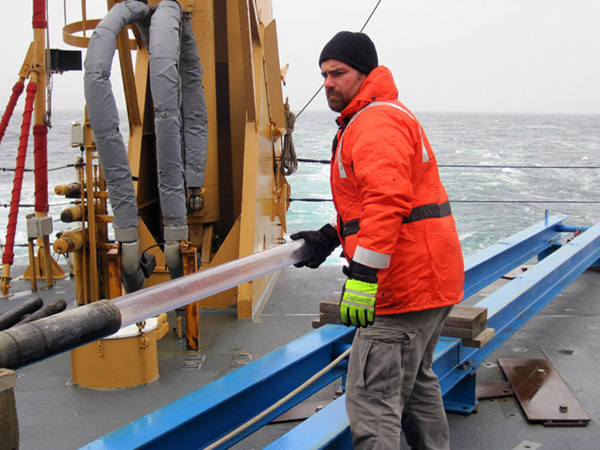 USGS Engineering Technician Pete Dal Ferro slides a plastic core liner into the metal core barrel. The core liner will encase the sediment sample and help keep it intact as it is removed from the core barrel, packaged for storage, and, ultimately, split open for study at our shore-based laboratories. Image courtesy of Helen Gibbons, USGS/ECS Project. Download image (jpg, 122 KB). 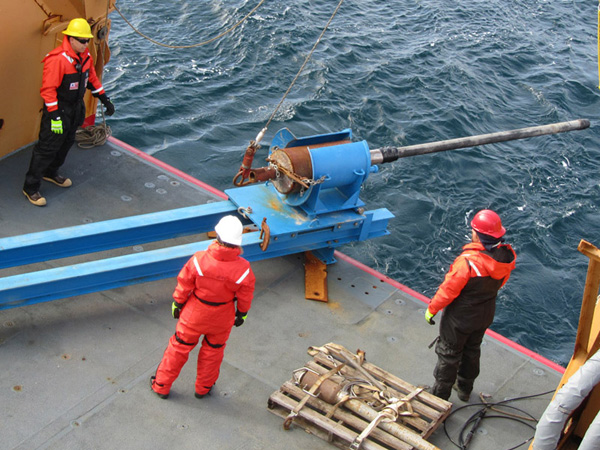 The gravity corer relies on a weight at the top to drive the barrel into the sediment. In this photo, the weight, with a 10-ft barrel attached, is cradled in the blue 'bucket', which has been moved to the end of a specially built track. The bucket will be rotated 90° so that the core barrel points straight down, then the corer will be winched out of the bucket, into the water, and down to the seafloor. Standing by (right to left) are Pete, Jenny, and Coast Guard Marine Science Technician MST3 Marshal Chaidez. Image courtesy of Helen Gibbons, USGS/ECS Project. Download image (jpg, 145 KB). 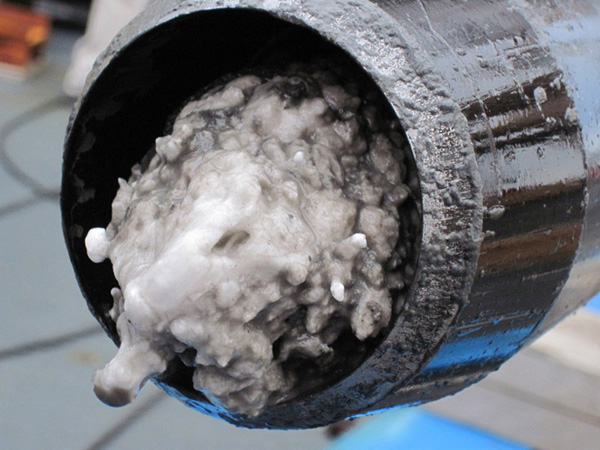 The piston corer, which hit bottom at about 2,550-m water depth, came back with gas hydrate in the core cutter at the bottom of the core barrel. Gas hydrate looks like water ice but is actually made up of water cages that enclose gas molecules, usually methane. Gas hydrate is stable at relatively low temperatures and moderate pressures like those beneath the seafloor at the coring site. At the surface, gas hydrate is not stable and breaks down (dissociates) into water and gas. Gas hydrate is sometimes called the 'ice that burns' because it will sustain a flame as the gas molecules are released. Image courtesy of Helen Gibbons, USGS/ECS Project. Download image (jpg, 102 KB). 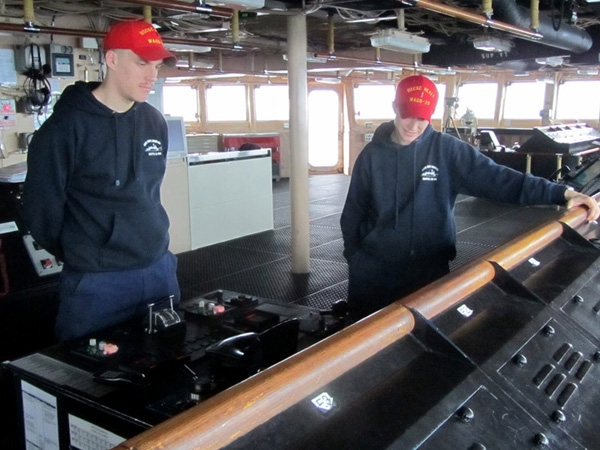 On the bridge: Officer of the Deck ENS Emily Kehrt (right) and Break-in Officer of the Deck ENS Nick Custer were on watch when we collected our first piston core. They kept the ship over one spot for several hours while the piston corer was deployed from the stern, winched to the seafloor and back, and re-secured on the deck—a challenging task, especially in the nearly 20-knot winds and 4 to 5-ft swells that prevailed on Wednesday night. Image courtesy of Helen Gibbons, USGS/ECS Project. Download image (jpg, 111 KB). 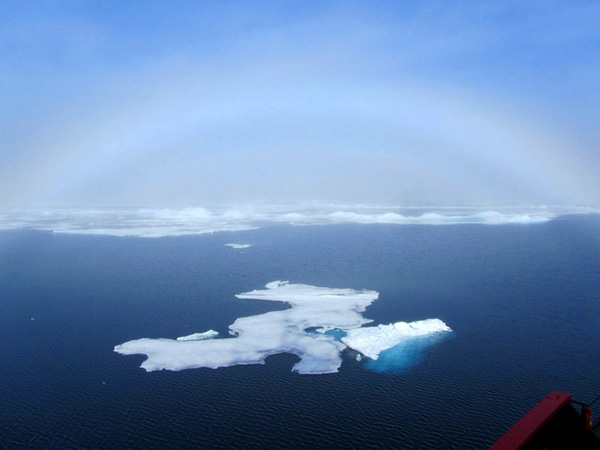 This photo was taken shortly after 1300 hrs on August 14. The sun was relatively high in the sky, and so I could fit the whole bow in one frame. You can see the faint colors of the rainbow, with red on the outside and indigo on the inside. Image courtesy of Helen Gibbons, USGS/ECS Project. Download image (jpg, 60 KB). 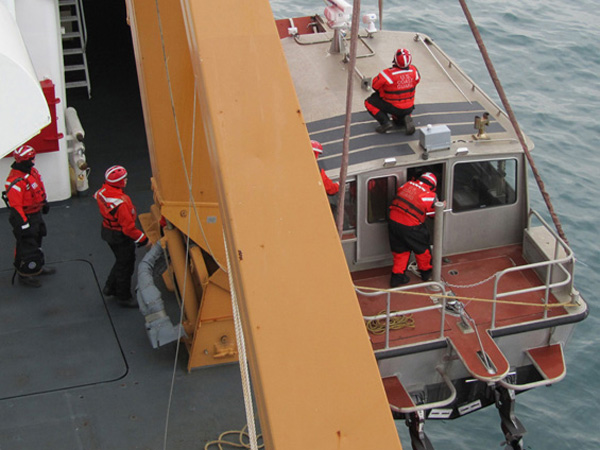 The ASB was lowered by crane from Healy’s 02 deck to a spot level with the 01 deck, where the crew—a coxswain (the driver), crewman, small-boat engineer, and additional Coasties learning these positions—climbed aboard. Image courtesy of Helen Gibbons, USGS/ECS Project. Download image (jpg, 99 KB).

This was the sixth in a series of U.S. cruises to the Arctic Ocean and the third in which U.S. and Canadian scientists are working together to map areas of the seafloor and to image the underlying sediment layers. The data was used to determine the limits of the “extended continental shelf.” Previous joint missions were conducted in 2008 and 2009.

The 2010 survey is taking place primarily in the Canada Basin of the Arctic Ocean, in an area bounded approximately by latitudes 71°N to 85°N and longitudes 158°W to 112°W (see trackline map above). This will be the first joint expedition to image sub-seafloor sediment layers within 200 nautical miles (nm) of the coast in the Arctic Ocean.

The 2010 survey is a two-ship expedition. The primary goal is to collect both multichannel seismic data (which will be done by explorers aboard the Louis S. St-Laurent) and multibeam echosounder data (handled by those aboard the Healy). In light to moderate ice, the Healy leads and breaks ice so that the Louis can tow its seismic gear. Where heavy ice makes towing the seismic equipment unsafe, or in areas where multibeam bathymetric (water depth) data have scientific priority, the Louis breaks ice ahead of the Healy.

In locations where open water permits, the two ships can operate independently. At these times, the Healy may also collect samples of the seafloor, using a variety of devices. A rock dredge, for example, collects samples of bedrock from the sloping sides of bathymetric features. Additional sampling may include dart coring of rock outcrop, and piston coring, box coring, gravity coring, or dredge sampling of abyssal — depths between 2,000 and 6, 000 meters (6,560 and 19,680 feet) — seafloor material. Information from these samples helps to define the limits of the extended continental shelf as well as to expand our knowledge of the region's geologic history.

The two ships use a multibeam echosounder to map swaths of seafloor, which is then compiled to the onboard Map Server. Image courtesy of Helen Gibbons, USGS/ECS Project. Download larger version (jpg, 857 KB).

The surveying systems on both ships rely on acoustic (sound) signals that bounce off surfaces, separating materials of different acoustic impedance — the product of the speed of sound in the material multiplied by its density. Examples of such surfaces are the boundary between water and sediment (the seafloor) and the boundaries between rock or sediment layers of different types. The frequency and energy of the acoustic signals, produced by sound sources (either mounted on or towed behind the vessel), determine how deeply the sound will penetrate beneath the seafloor and how much resolution (detail) will be revealed in the resulting images. Higher frequencies provide greater resolution but less penetration below the sea floor; lower frequencies yield deeper penetration but less resolution.

New to this year's project is a subsidiary study of ocean acidification, in which seawater samples are being collected and analyzed to examine the effect of increasing levels of atmospheric CO2 on arctic waters. As in previous years, ice extent and characteristics are being recorded, and (as conditions permit) open-ocean and ice buoys are being deployed to track water currents and ice movement.

Marine mammal observers are also aboard, recording mammal sightings in areas where observations are rarely made and alerting the ship's officers when a mammal is close enough that operations should be adjusted in order to avoid disturbing it.

The U.S. part of the mission is being led by the U.S. Geological Survey (USGS), with additional funding and scientific support from the U.S. Coast Guard. Dr. Brian Edwards, USGS, is chief scientist of the expedition aboard the Healy. Dr. David Mosher of Natural Resources Canada, Geological Survey of Canada, is leading the Canadian part of the mission. Jonathan Childs of the USGS is the U.S. liaison aboard the Louis and head of the U.S. Interagency Task Force Seismic Data Operations Team.

This collaboration offers many benefits. It continues to save millions of dollars for both countries, provide data both countries need, ensure that data are collected only once in the same area, and increase scientific and diplomatic cooperation. Expectations are that the two nations will work together again in the summer of 2011. 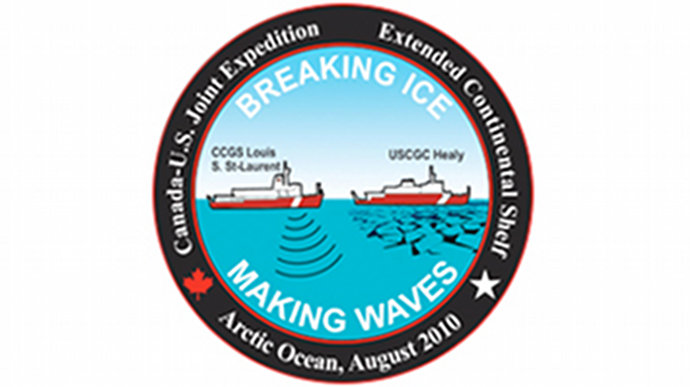