Deep Connections 2019: Exploring Atlantic Canyons and Seamounts of the United States and Canada

From August 6 through September 15, 2019, NOAA and partners will conduct a telepresence-enabled ocean exploration expedition on NOAA Ship Okeanos Explorer to collect critical baseline information about unknown and poorly understood deepwater areas of the U.S. and Canadian Atlantic continental margin. As with previous Okeanos Explorer expeditions, NOAA will work closely with the science and resource management communities to explore priority deepwater areas. The deep waters off the U.S. and Canadian east coasts contain a wide diversity of poorly explored deepwater habitats and geological features that are of interest to resource managers and scientists, including submarine canyon and slope habitats, seamounts, deep-sea coral and sponge habitats, fish habitats, submarine landslides, and other potential geohazards.

There will be two legs to the Deep Connections 2019: Exploring Atlantic Canyons and Seamounts of the United States and Canada expedition. The first leg will consist of 24-hour-a-day mapping operations using the ship’s deepwater mapping systems (Kongsberg EM 302 multibeam sonar, Simrad EK 60 and EK 80 split-beam fisheries sonars, Knudsen 3260 chirp sub-bottom profiler sonar, and Teledyne Acoustic Doppler Current Profilers) to collect baseline seafloor and water column data. The second leg will build on mapping data collected during Leg 1 in order to further explore this region. Leg 2 will include focused remotely operated vehicle (ROV) operations using NOAA's dual-body ROV capable of diving to depths of 6,000 meters (3.7 miles) to explore a diversity of poorly known deep seafloor and midwater habitats, as well as unique geological features. Additionally, the expedition will use the ship’s high-bandwidth satellite connection to engage a broad spectrum of scientists, resource managers, and the public in telepresence-based exploration.

Why Explore the U.S. and Canadian Atlantic Continental Margin?

The Deep Connections 2019 expedition will be one of several expeditions taking place in 2018-2020 that will contribute directly to the Atlantic Seafloor Partnership for Integrated Research and Exploration (ASPIRE) campaign, a major multi-year, multi-national collaborative field program focused on raising our collective knowledge of the North Atlantic Ocean. The North Atlantic has a pivotal impact on humankind, providing a myriad of ecosystem services such as food security and protection from hazards, as well as influencing other economic sectors such as trade and tourism and recreation, which collectively provide employment and livelihood opportunities for millions of people. Despite its critical importance, we have only begun to understand the region’s deep-sea resources, oceanography, bathymetry, geology, ecosystems, and trans-Atlantic biological connectivity. 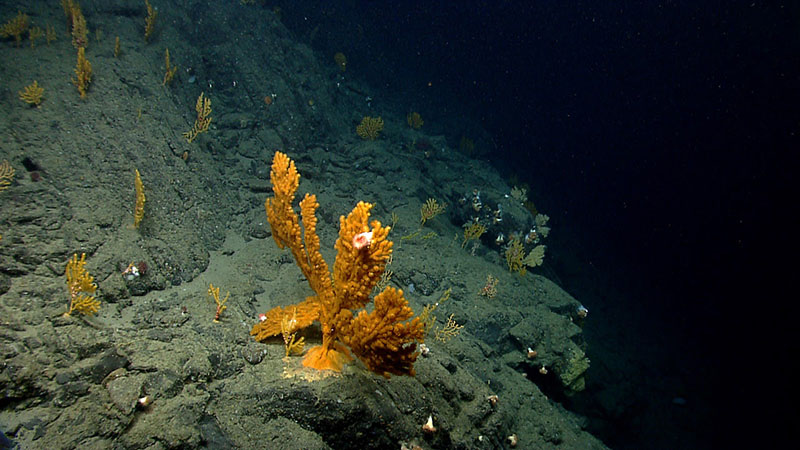 The Deep Connections 2019 expedition will explore poorly known submarine canyon habitats of the U.S. and Canadian Atlantic Continental Margin using ROVs. Submarine canyons are considered hotspots of biodiversity due to their high abundance and diversity of benthic organisms, such as these dense aggregations of sea fans documented in Oceanographer Canyon in 2013. Image courtesy of the NOAA Office of Ocean Exploration and Research. Download image (jpg, 840 KB).

Besides being largely unexplored, the deep waters of the U.S. and Canadian Atlantic Continental Margin contain a wide diversity of fascinating deepwater habitats and geological features, including escarpments, slope habitats, seamounts, and an extensive network of submarine canyons. Seamounts and submarine canyons in particular are often heralded as hotspots of biodiversity, as these habitats harbor a great abundance and diversity of sensitive marine organisms, including commercially, recreationally, and ecologically important species. Thus, seamounts and canyons have become a priority for resource managers and scientists. Previous work on these habitats suggests that they often have their own biological and geological signatures. But we cannot effectively manage and conserve what we don’t know. Filling in knowledge gaps provides us the opportunity to better understand species distributions, the processes influencing the structure of these sensitive deep-sea communities, and connectivity between habitats. We also know that, unlike humans, biological organisms do not recognize geopolitical borders. By working across the U.S.-Canadian boundary, we will gain a better understanding of the North Atlantic Ocean as a whole. 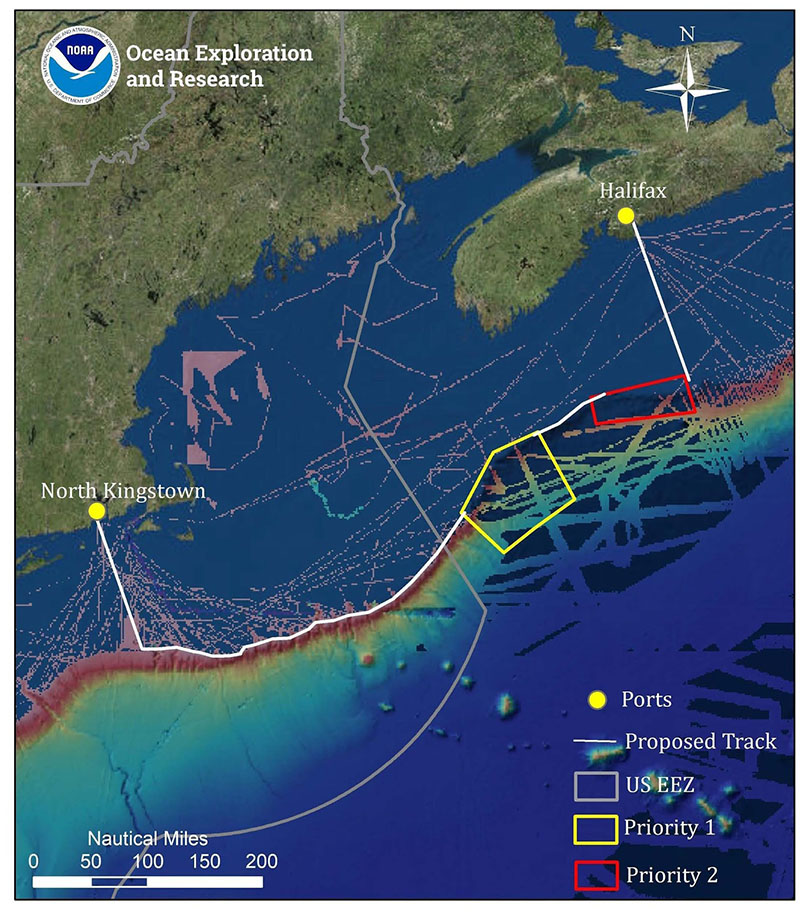 Map showing the priority areas for and mapping operations to be conducted during Leg 1 of the Deep Connections 2019 expedition, overlaid onto existing mapping data in the region. This expedition will explore poorly understood deepwater areas of the U.S. and Canadian Atlantic Continental Margin to address science and management priorities of the region. Image courtesy of the NOAA Office of Ocean Exploration and Research. Download image (jpg, 1.2 MB).

The onboard team for this leg of the expedition will include participants from the NOAA Office of Ocean Exploration and Research (OER)’s Explorer-in-Training (EiT) program, who will experience life at sea and undergo training in the acquisition and processing of deepwater mapping data; a team of engineers from the Global Foundation for Ocean Exploration, who will support data management, network, and ship-to-shore communications; and mapping operations led by personnel from the University Corporation for Atmospheric Research in partnership with OER. 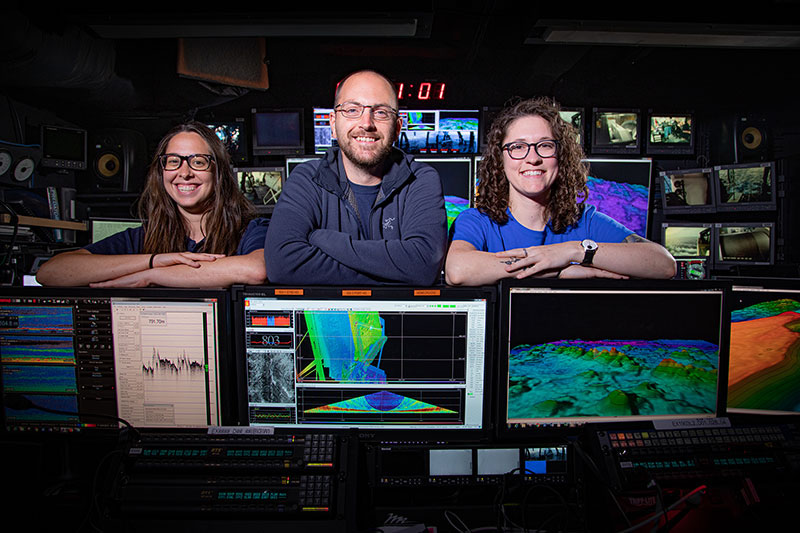 The Okeanos Explorer’s Mission Control Room with the onboard mapping team. Image courtesy of the NOAA Office of Ocean Exploration and Research. Download image (jpg, 285 KB). 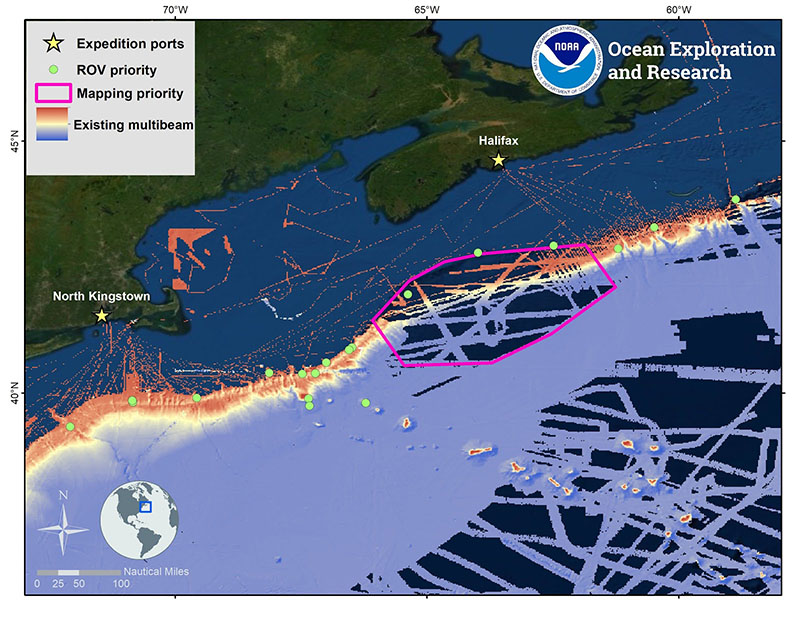 Map showing the priority areas for remotely operated vehicle (ROV) and mapping operations to be conducted during the second leg of the Deep Connections 2019 expedition, overlaid onto existing mapping data in the region. This expedition will explore poorly understood deepwater areas of the U.S. and Canadian Atlantic Continental Margin to address science and management priorities of the region. Image courtesy of the NOAA Office of Ocean Exploration and Research. Download image (jpg, 1.1 MB).

This 21-day expedition leg will start in Halifax, Nova Scotia, on August 26, 2019, and end in North Kingstown, Rhode Island, on September 15, 2019. The expedition will include 24-hour-a-day operations, including daytime ROV dives to depths ranging between 250-3,000 meters (~820-9,843 feet), overnight mapping operations to depths of 5,000 meters (16,404 feet), as well as continuous shore-side participation via telepresence technology. ROV dives will focus on exploring submarine canyons and slope habitats, seamounts, deep-sea coral and sponge communities, midwater habitats, unique geological features, and other poorly known deep-sea habitats. Mapping operations will concentrate on seafloor and water column areas with little or no high-quality sonar data, as well as being used to support ROV operations and identify potential maritime heritage sites. Data collected on this expedition will support the development of habitat suitability models and geohazard models and enhance our understanding of poorly explored deepwater areas offshore of the U.S. Mid-Atlantic, New England, and Nova Scotia. 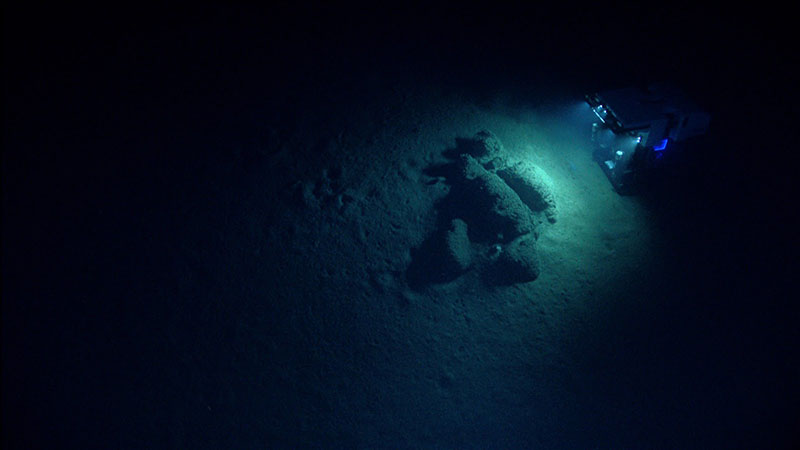 During Leg 2 of the Deep Connections 2019 expedition, ROV Deep Discoverer will be used to acquire high-definition visual data and collect limited physical samples in poorly explored areas of the U.S. and Canadian Atlantic Continental Margin. Image courtesy of the NOAA Office of Ocean Exploration and Research. Download image (jpg, 363 KB).

Leg 2 of the Deep Connections 2019 expedition will take place from August 26 through September 15, 2019, and will address science and management priorities put forward by scientists and managers from the United States and Canada and international working groups supporting the Atlantic Ocean Research Alliance  and the European Union’s Horizon 2020  program. NOAA priorities for the expedition include a combination of science, education, outreach, and open data objectives that will provide a better understanding of this important, yet mostly unexplored, marine region: 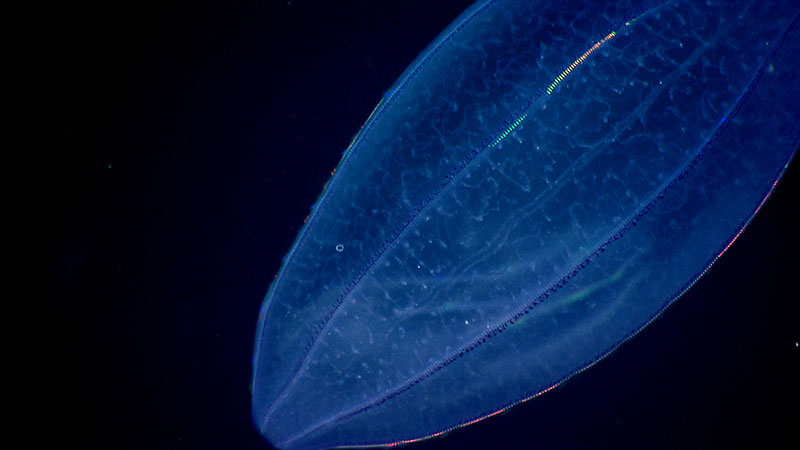 In addition to deepwater seafloor habitats, Leg 2 of the Deep Connections 2019 expedition will also include exploration of poorly known midwater habitats of the U.S. and Canadian Atlantic Continental Margin, which are the largest and one of the least explored of all deepwater habitats. Image courtesy of the NOAA Office of Ocean Exploration and Research. Download image (jpg, 132 KB). 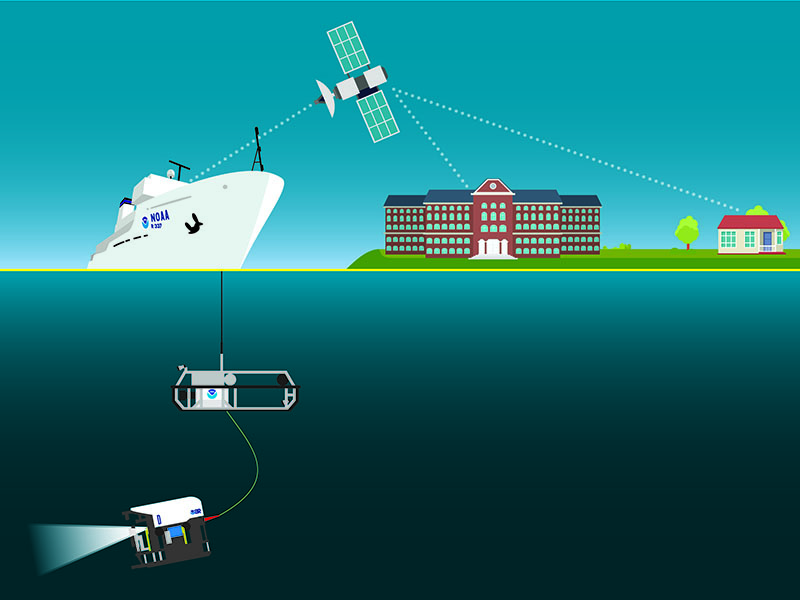 NOAA Ship Okeanos Explorer uses telepresence technology to transmit data in real time to a shore-based hub where the video is then transmitted to a number of exploration command centers around the country, as well as to any Internet-enabled device. Access to the video combined with a suite of Internet-based collaboration tools allow scientists and the public on shore to join the operation in real time. Image courtesy of the NOAA Office of Ocean Exploration and Research. Download image (jpg, 2 MB).

During the Deep Connections 2019 expedition, scientists will also work together and stand watches at several exploration command centers (ECCs) around the country. When NOAA Ship Okeanos Explorer expeditions first started 10 years ago, ECCs were the only way that scientists could engage with the ship. With advancing technologies, scientists can now participate in expeditions from any place with an Internet connection. However, EECs still provide highly effective science collaboration centers, as they allow many scientists to come together and focus in a single location and share their expertise. Close to a dozen ECCs will be active throughout the Deep Connections 2019 expedition, including a new one that will be launched for this expedition in Dartmouth, Nova Scotia, and thereby provide invaluable mission support from shore.

Anyone with an Internet connection can follow along with the expedition, as high-definition video of dives will be streamed live over the Internet from August 27 through September 14, 2019. The same telepresence technology that allows scientists from around the world to participate in the expedition from land will also enable interested members of the public to experience deep-sea exploration, the wonder of discovery, and the fascination of science in real time. Additionally, mission logs, daily updates, educational materials, and multimedia elements will be added to the Ocean Explorer website throughout the expedition. Furthermore, highlight images, videos, and other information from the expedition will also be posted daily to the OER Facebook , Instagram , and Twitter  accounts.