During the transit to Bellingham, Washington, we encountered a number of whales and dolphins, including this pod of Pacific white sided dolphins who stayed with us for about an hour. Image courtesy of NOAA Office of Ocean Exploration and Research, Tropical Exploration 2015. Download larger version (jpg, 3 MB).

NOAA Ship Okeanos Explorer has successfully completed dry dock and is now on her way to Hawaii in preparation for the next three months’ worth of mapping and remotely operated vehicle operations in and around Papahanaumokuakea Marine National Monument, Hawaiian Islands Humpback Whale National Marine Sanctuary, and Johnston Atoll.

Once pulled out of the water, you can really appreciate the size of NOAA Ship Okeanos Explorer, including the parts of the ship that lay below the waterline that we rarely see. Image courtesy NOAA Office of Ocean Exploration and Research, Tropical Exploration 2015. Download larger version (jpg, 3.9 MB).

Early on in the cruise, an issue with our stern thruster forced us to deviate from our planned track and head to dry dock for repairs. Once we arrived in Bellingham, Washington, the ship was quickly pulled—by rope and tug boats—into a dock slip that would eventually become our dry dock.

Five days later, the work was complete and the ship returned to the water for a one-day sea trial to evaluate the repair work. All of the tests were successful and Okeanos left the next day (June 15) for Hawaii.

This expedition was a bit of a disappointment for everyone onboard. We lost several days of valuable science operations, including mapping the Clipperton Fracture Zone, an area that has never been mapped with high-resolution multibeam sonar; deploying Argo floats in an infrequently visited area of the world; and recovering Prawler moorings that have valuable physical oceanographic data. Unfortunately, ships can break and this is part of the reality of conducting at-sea operations. We did, however, have a great crew and mission team who all put forth a commendable effort making the best out of a bad situation.

While we never made it to Hawaii, we did make the best use possible of our time at sea. We traveled over 4,000 nautical miles and collected sonar and sea surface salinity data where permits and sea state permitted. Our four Explorers-in-Training learned about sonar operations, how to process mapping data, life at sea, and designed a campaign to map the world’s oceans.

Now that the expedition has concluded, we asked our team what they miss most about being at sea, and what don’t they miss at all. Check out some of their answers below.

Favorite part of being at sea: Working on a ship in the middle of the ocean is very humbling. The size of Earth and the power of nature is really quite tangible when you're being tossed around in 15-20-foot seas and all that surrounds you is endless water. Going out to sea helps keep me connected to our environment and keeps the daily stress of life on land in check.

What I don't miss: The noise. Ships are so noisy. When I got home, I took a few moments to just enjoy the silence.

My favorite part of being at sea was the opportunity to meet a group of fascinating people that are just as passionate about the ocean as I am. Each day was a learning experience. Now that my feet are firmly planted on land, I don't miss taking showers in rough seas, though I do miss the swells rocking me to sleep.

I miss the camaraderie that comes along with being aboard a ship with such a small society, I miss the calm and stillness of the sunrises, and I miss the anticipation of something great being revealed from the sonars. But, I'm happy to be back on land where space to move is seemingly unlimited. I've been doing a lot of cartwheels, somersaults, and drum playing—activities that prove to be bothersome in tight, shared quarters.

There are many things I love about being at sea. First and foremost, there's meeting great people and doing hands-on research; but there are also little perks like almost unparalleled star gazing (no light pollution!) and seeing marine animals.

Being much more of an outdoors than gym person, I don’t miss the inability to go for a run, bike ride, hike, or any other outdoor activity (and in my book, rope jumping on the fan tail does not count as an ‘outdoor activity’).

I miss the excitement and fast pace of being at sea. We operate 24/7, so there is always something going on and things are constantly changing, whether it is from varying sea state, gathering new information, or something isn’t working so we need to adapt. Being back at my desk in DC seems a bit slow now.

I don’t miss the schedule. Everything on a ship is scheduled, from meals to briefings and meetings to watch schedules. I am very happy to have a bit more flexibility in my life again.

En route to Bellingham, NOAA Ship Okeanos Explorer rode face 15 to 20-foot seas and high winds with gusts as high as 53 knots. Here you can see the how dramatically the ship pitches in bad weather. Keep your eyes peeled for a special visitor in the top left corner of the video. Video courtesy of Dan Freitas. Download (mp4, 21.9 MB) Download (mp4, 21.9 MB)

While waiting for the dry dock decision in San Francisco, our Pacific Marine Environmenta Laboratory (PMEL) scientists, Dave Rivera and Kevin Micheal, discovered a PMEL buoy at the Exploratorium, next to where the ship was docked. This buoy was built by the same group at PMEL and is used for education and outreach at the Exploratorium. Image courtesy NOAA Office of Ocean Exploration and Research, Tropical Exploration 2015. Download larger version (jpg, 5.2 MB). 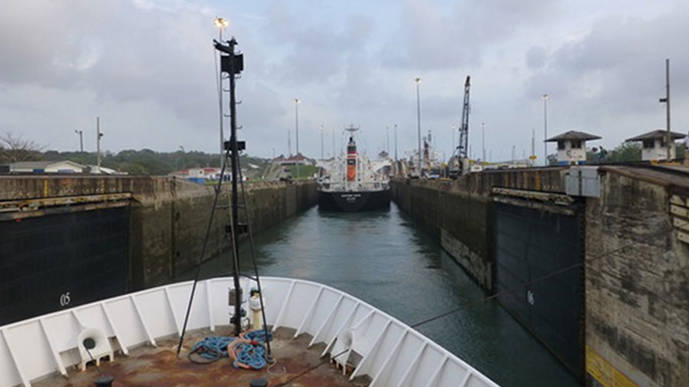 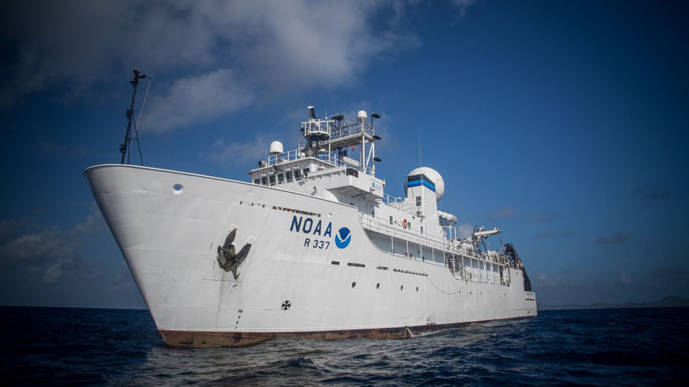 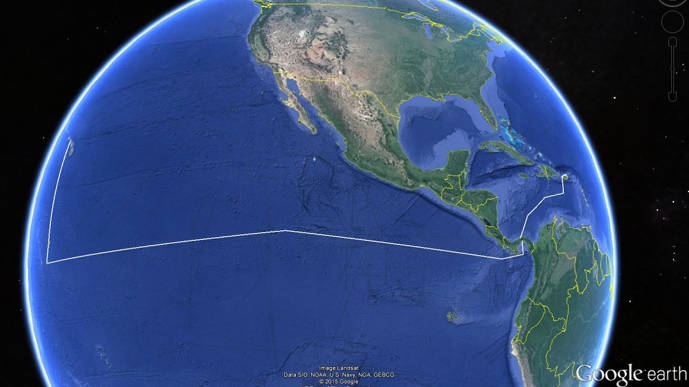 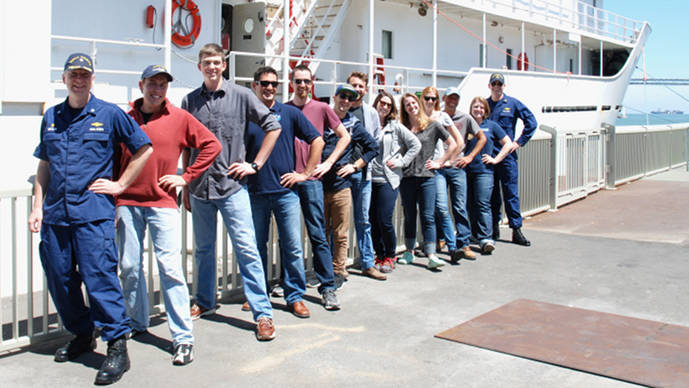