Why Are Scientists Exploring the Diversity and Distribution of Deep-Sea Habitats in the Northern Gulf of Mexico?

On August 13, 2008, the NOAA Ship Okeanos Explorer was commissioned as "America’s Ship for Ocean Exploration;" the only U.S. ship whose sole assignment is to systematically explore our largely unknown ocean for the purposes of discovery and the advancement of knowledge. To fulfill its mission, the Okeanos Explorer has specialized capabilities for finding new and unusual features in unexplored parts of Earth’s ocean, and for gathering key information that will support more detailed investigations by subsequent expeditions. These capabilities include: 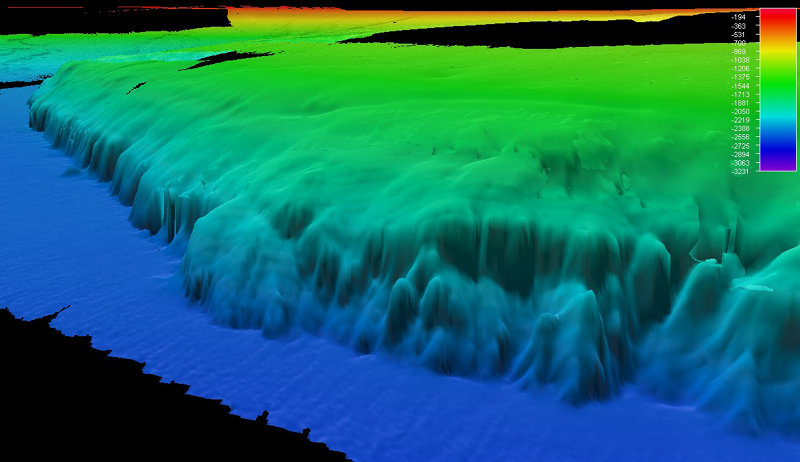 Figure 1. Bathymetry of the West Florida Escarpment. The base of the escarpment (2,600 meters depth) is shown in blue with the upper rim more than 600 meters above. Image courtesy of the NOAA Office of Ocean Exploration and Research. Download larger version (jpg, 410 MB).

Capability for broadband telecommunications provides the foundation for telepresence: technologies that allow people to observe and interact with events at a remote location. This allows live images to be transmitted from the seafloor to scientists ashore, classrooms, newsrooms and living rooms, and opens new educational opportunities, which are a major part of Okeanos Explorer’s mission for the advancement of knowledge. In this way, scientific expertise can be brought to the exploration team as soon as discoveries are made, and at a fraction of the cost of traditional oceanographic expeditions.

The purpose of the Gulf of Mexico 2012 Expedition is to explore unknown and poorly known ocean areas in the Gulf of Mexico. Specifically, the northern West Florida Escarpment, the DeSoto Canyon in the northeastern Gulf, the vicinity of the Deepwater Horizon or Macondo Well, and deepwater shipwrecks (Figures 1 – 4). A major objective of the expedition is to use the Okeanos Explorer’s state-of-the-art ocean exploration capabilities to investigate the diversity and distribution of deep-sea habitats and marine life in the target areas. Even after extensive investigations following the Deepwater Horizon blowout event in 2010, much of the Mississippi Canyon area where the event occurred remains unexplored. Throughout the deep Gulf of Mexico the situation is much the same: the ecology and even the basic distribution of seeps and deep-sea ecosystems are still poorly understood.

This is the latest in a series of expeditions sponsored by NOAA’s Office of Exploration and Research (OER) to explore deep-sea organisms and ecosystems in the Gulf of Mexico. Between 2001 and 2010, OER sponsored 12 such expeditions. The Lophelia II 2010: Oil Seeps and Deep Reefs expedition was particularly significant, since it took place less than six months following the April 20, 2010 Deepwater Horizon event. Results from this expedition published in the Proceedings of the National Academy of Sciences (PDF, 1.1 MB.)  suggest that the Deepwater Horizon oil spill did have an impact on a nearby community of deep-water corals. 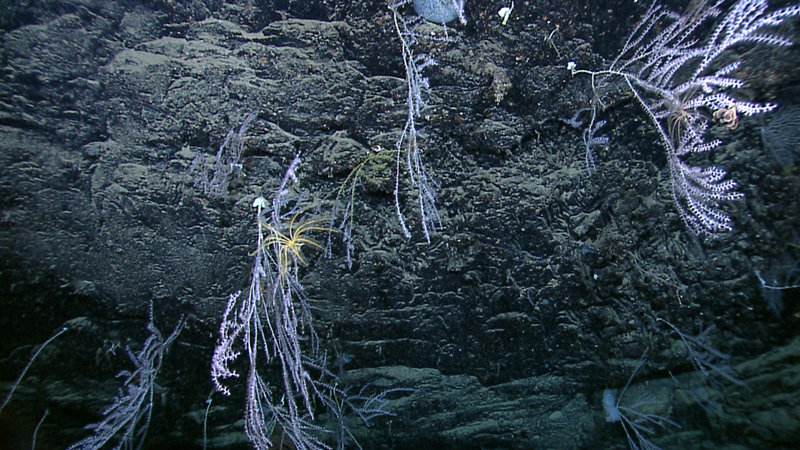 Bamboo corals (with an attached crinoid) on a scarp wall in the DeSoto Canyon area (2,055 meters depth).Image courtesy of the NOAA Office of Ocean Exploration and Research. Download larger version (jpg, 1.6 MB). 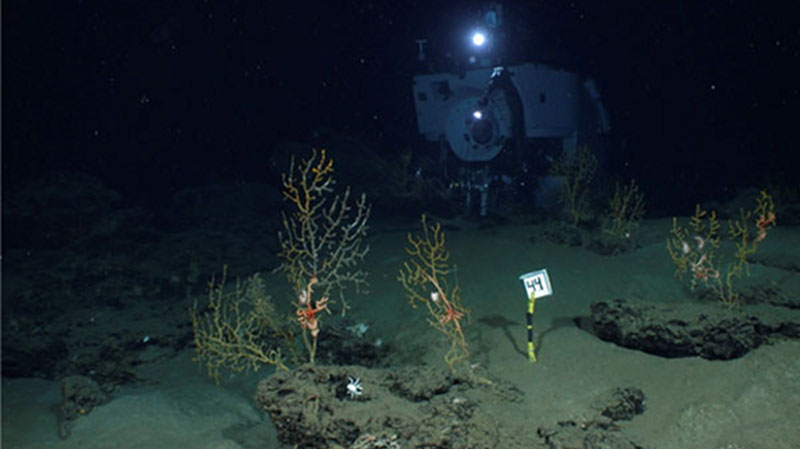 Corals and associated animals living with them in the vicinity of the Deepwater Horizon oil spill (within 11 kilometers) as captured by a time-lapse camera image. Image courtesy of Chuck Fisher and T. Shank, Woods Hole Oceanographic Institution. Download image (jpg, 50 KB).

The Gulf of Mexico 2011 Expedition demonstrated that the Okeanos Explorer’s deepwater multibeam sonar system can be used to map the location of gaseous seeps, and this capability will be used to search for hydrocarbon seeps in all of the areas to be explored. While much of the exploration of deepwater ecosystems in the Gulf of Mexico has been driven by their association with hydrocarbon seeps that may indicate the presence of undiscovered petroleum deposits, these are also unique biological communities whose importance is presently unknown (for more about hydrocarbon seeps and their associated ecosystems, please see Lessons from the Deep: Exploring the Gulf of Mexico's Deep-Sea Ecosystems Education Materials Collection.

Seafloor habitats associated with hydrocarbon seeps will be explored using the Institute for Exploration’s Little Hercules remotely operated vehicle (ROV) and NOAA’s Seirios camera platform. Using the ship’s telepresence capabilities, live images from the seafloor and other science data will flow over satellite and high-speed Internet pathways to scientists standing watches ashore at Exploration Command Centers (ECCs). During some portions of the expedition, live internet connections will allow the public across the globe to witness explorations as they unfold hundreds to thousands of meters below the ocean surface. For more information about the Gulf of Mexico 2012 Expedition, please see the background essays. For more information about Little Hercules, Seirios, multibeam sonar and telepresence, please see https://oceanexplorer.noaa.gov/okeanos/explorations/ex1103/background/seirios/seirios.html and https://oceanexplorer.noaa.gov/okeanos/explorations/ex1103/background/edu/purpose.html.

Figure 4. Mosaic of the Ewing Bank Wreck at 621 meters in the Gulf of Mexico. This three-dimensional perspective of the Ewing Bank Wreck was produced by "draping" the photo mosaic over the multibeam bathymetry. The photos and multibeam data were collected with the C-Surveyor autonomous underwater vehicle. Image courtesy of C & C Technologies, Inc. Download larger version (jpg, 127 KB).

In addition to deepwater habitats and hydrocarbon seeps, the expedition will also investigate some of the Gulf of Mexico’s more than 4,000 shipwrecks, which are important cultural resources that span several centuries of human history. These wrecks often contain important clues about the societies to which they once belonged:

"For several millennia, ships were the most sophisticated machines on earth. They have shaped history by expanding trade and waging war, spreading ideas (and sometimes plague), and discovering and colonizing new lands. At the same time, the crews of these ships lived in closed societies, with traditions, beliefs, vocabularies, and hierarchies that set them apart from those on shore. When one of these ships met with disaster at sea or sank as a result of war, its remains literally became a time capsule, preserving clues to the story of our past." [BOEM website]

Many such wrecks have been discovered by surveys that use sonar to detect promising sites for oil and gas exploration. While the locations of these wrecks are reported to the Bureau of Ocean Energy Management (the federal agency responsible for protecting natural and cultural resources) their exact identity usually cannot be confirmed without visual information from divers or remotely operated vehicles. Several possible wreck locations have been previously reported in the planned survey area for the Gulf of Mexico 2012 Expedition, and some of these will be visually explored with Little Hercules and Seirios. For more information about Gulf of Mexico shipwrecks, please see Deep Wrecks 2009.