In June and July 2011, the GALREX 2011 expedition explored the diverse habitats and geologic settings of the deep Galápagos region, including axial volcanic ridges, hydrothermal vents, off-axis sulfide mounds, and seamounts. The discovery of deep-sea hydrothermal vents and associated organisms on the Galápagos Rift (GR) in 1977 profoundly changed our view of the deep-sea and revolutionized the biological and Earth sciences. During the 2011 field season, the NOAA Ship Okeanos Explorer provided scientists, engineers, and the public with an opportunity to explore unseen areas and revisit historical sites in the GR. More than 40,000km2 of seafloor were mapped by the ship’s multibeam sonar, 11 CTD tows completed a ~400 km-long hydrothermal plume survey of the unexplored eastern arm of the Rift, and 12 ROV dives collected more than 90 hours of high-definition digital video. Data and ROV video feeds were transmitted by broadband satellite from the ship to a team of scientists onshore. The expedition team evaluated seafloor observations, directed seafloor ROV, CTD, and mapping operations in real-time, and maintained a portal for outreach (http://oceanexplorer.noaa.gov).

Some of the best images from ROV dives during the Galapagos Rift Expedition, July 2011. 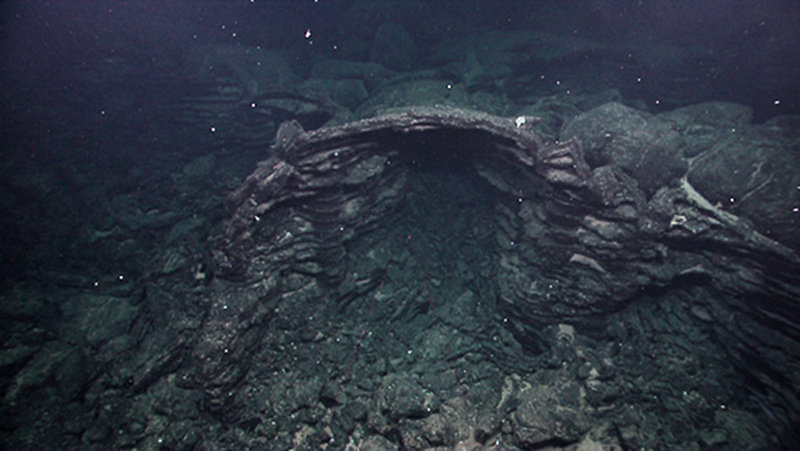 An archway formed by lava pillars supporting a remnant of intact lobate lava flow crust within a large collapsed lava lake. Individual ledges on the pillar form as 'bathtub rings' as the lava freezes to the side of the pillar during the draining of the lava lake. Image courtesy of NOAA Office of Ocean Exploration and Research. Download larger version (jpg, 1.1 MB). 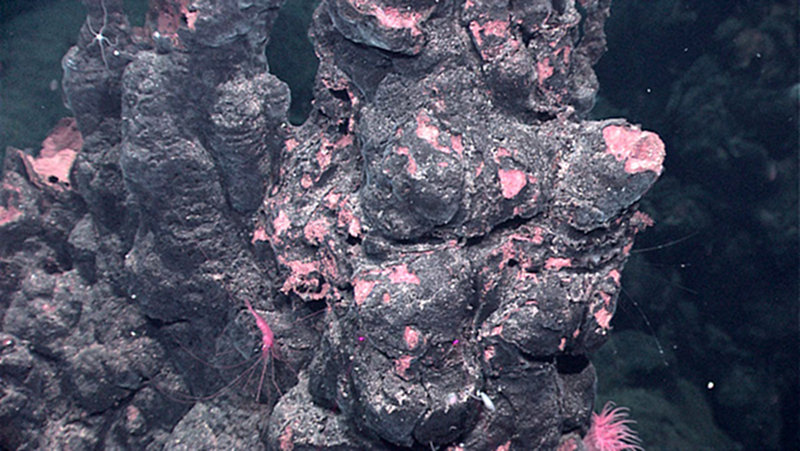 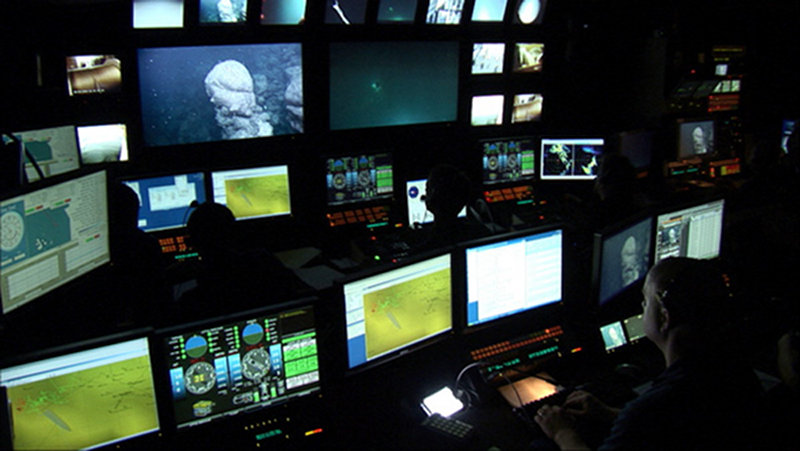 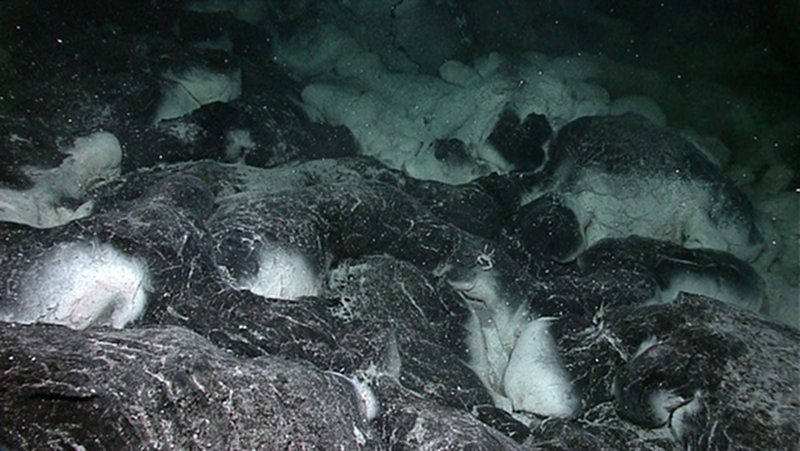 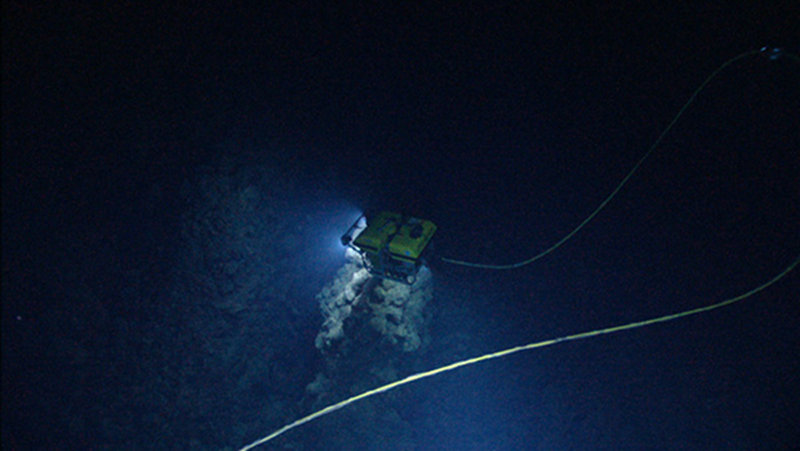 Little Hercules, as seen by Seirios above, hovers over a deep graben feature on the expedition's third dive. Image courtesy of NOAA Office of Ocean Exploration and Research. Download larger version (jpg, 1.7 MB). 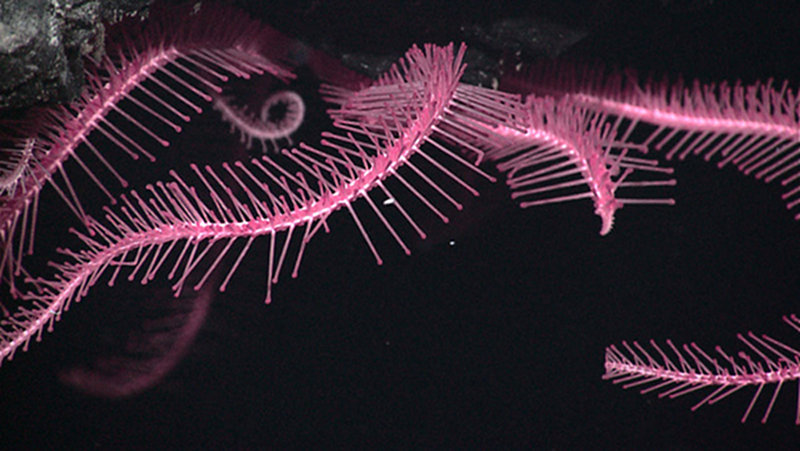 Close-up of a seastar on the underside of the basaltic substrate outside of an active vent area. Image courtesy of NOAA Office of Ocean Exploration and Research. Download larger version (jpg, 1.7 MB). 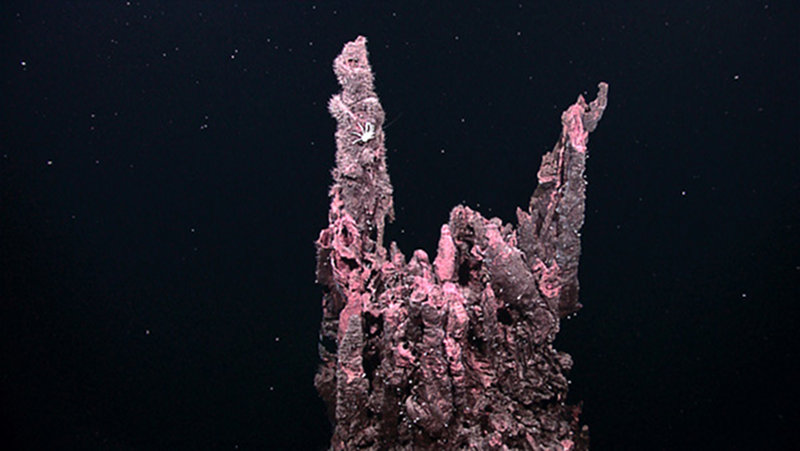 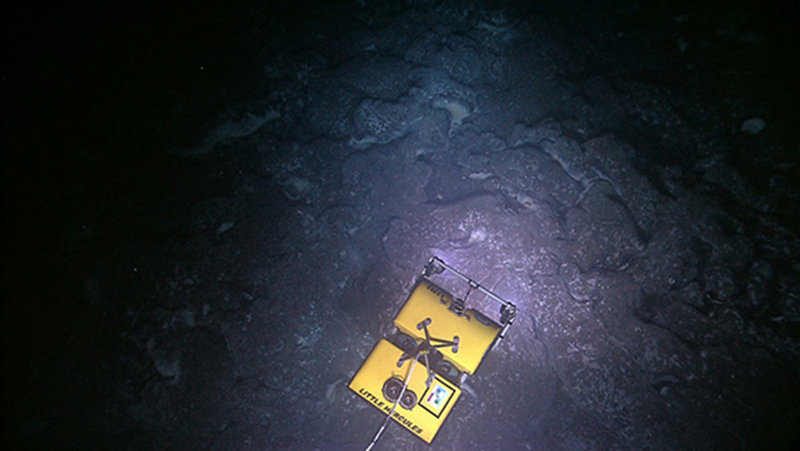 A large expanse of pillow lava is illuminated by Seirios and explored by Little Herc. Image courtesy of NOAA Office of Ocean Exploration and Research. Download larger version (jpg, 1.4 MB). 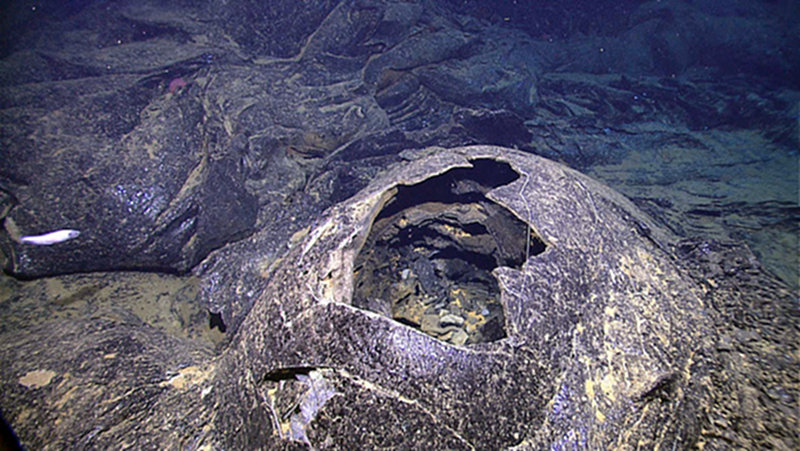 Collapsed top of an inflated lobate lava flow formed as the lava crust cooled as the lava drained out of the bubble during the eruption. Several layers of collapse crust can be seen inside of the hole. Image courtesy of NOAA Office of Ocean Exploration and Research. Download larger version (jpg, 2.0 MB). 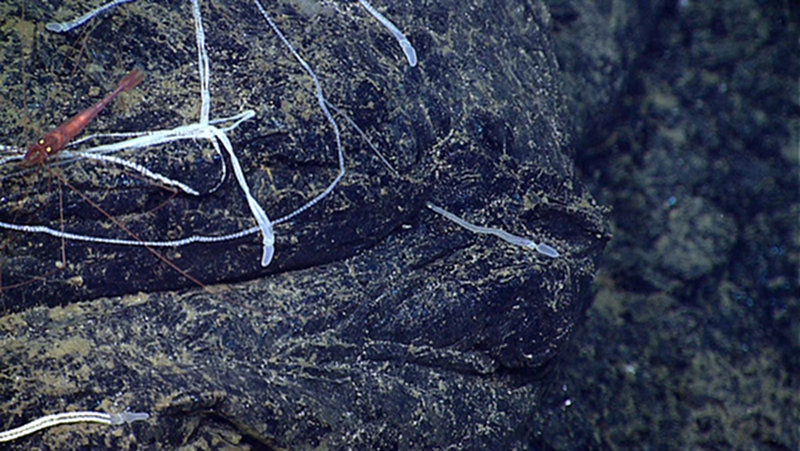 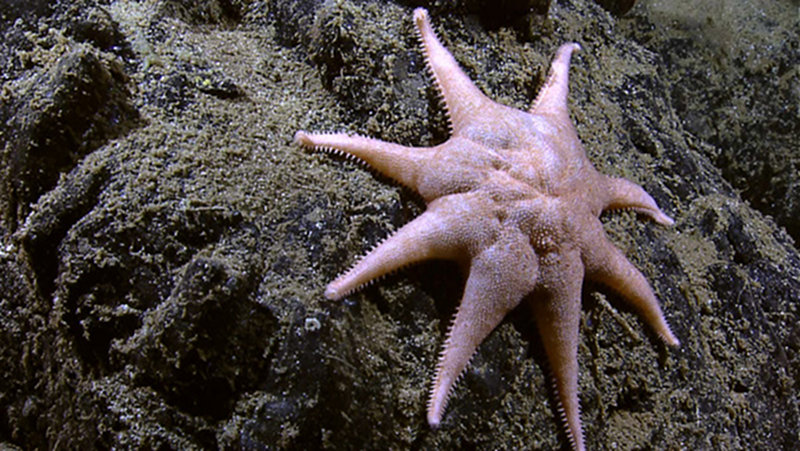 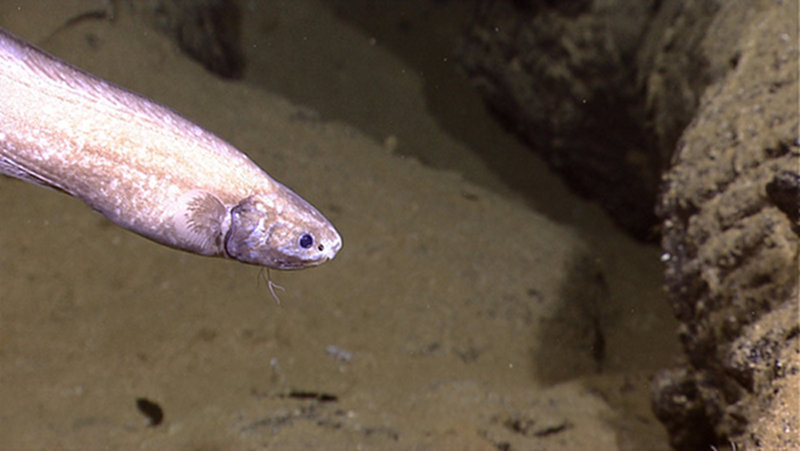 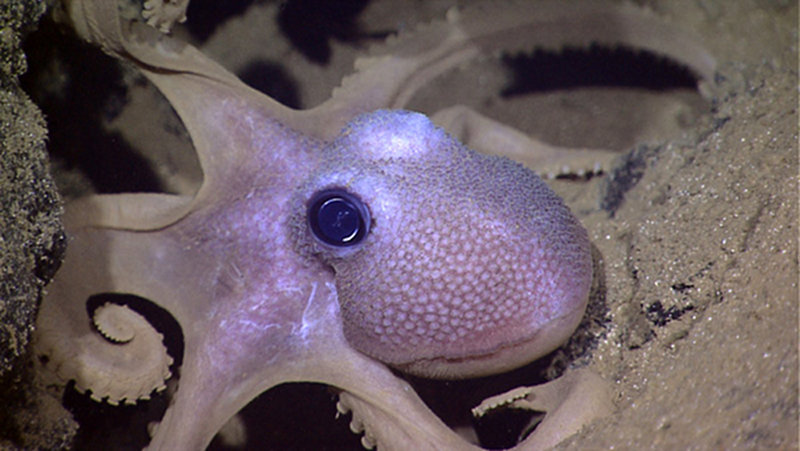 This octopus and several like it were observed at ~2500m during the GALREX expedition. Image courtesy of NOAA Office of Ocean Exploration and Research. Download larger version (jpg, 1.4 MB). 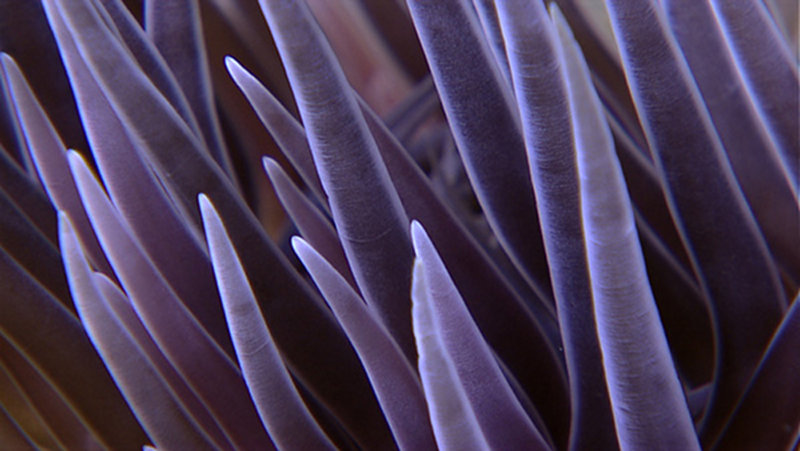 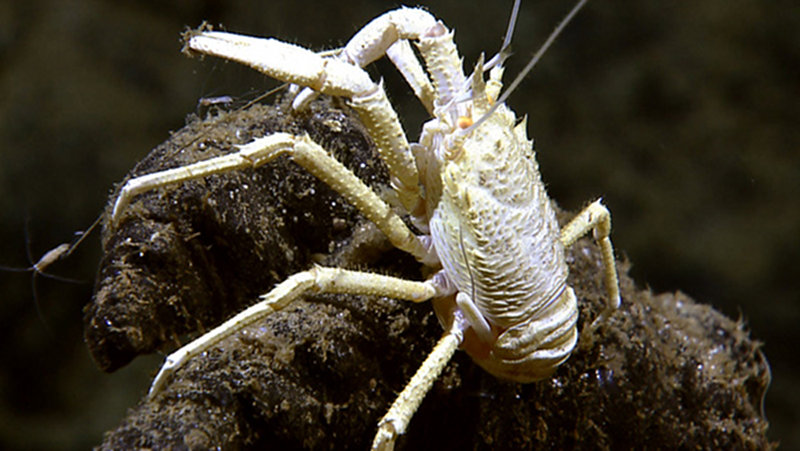 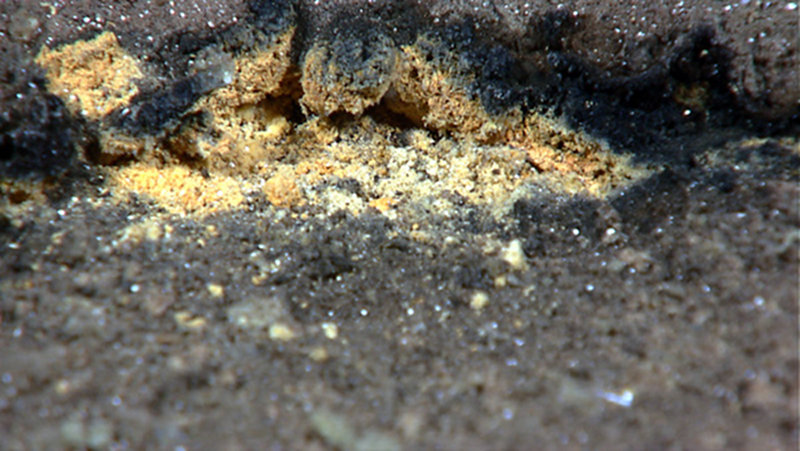 Yellow sulfide deposit at a crack at the base of an off-axis sulfide mound in the seafloor, seen on the final dive of the expedition. Image courtesy of NOAA Office of Ocean Exploration and Research. Download larger version (jpg, 1.5 MB). 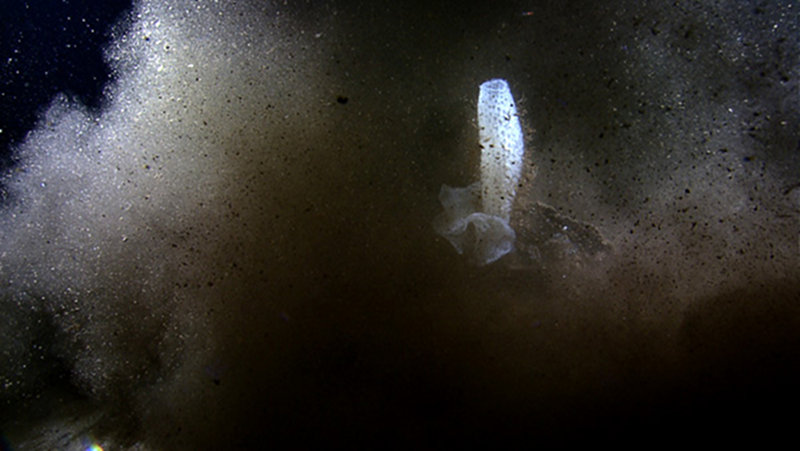 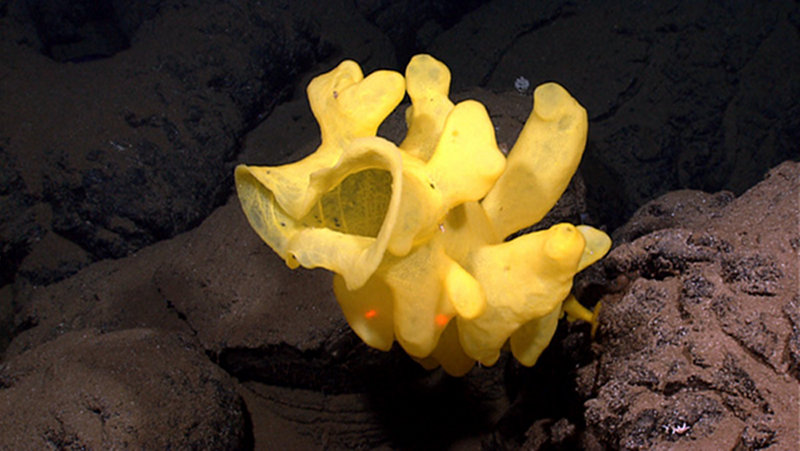 A bright yellow sponge stands out against the sediment-covered lava on the final dive of the expedition. Image courtesy of NOAA Office of Ocean Exploration and Research. Download larger version (jpg, 1.5 MB). 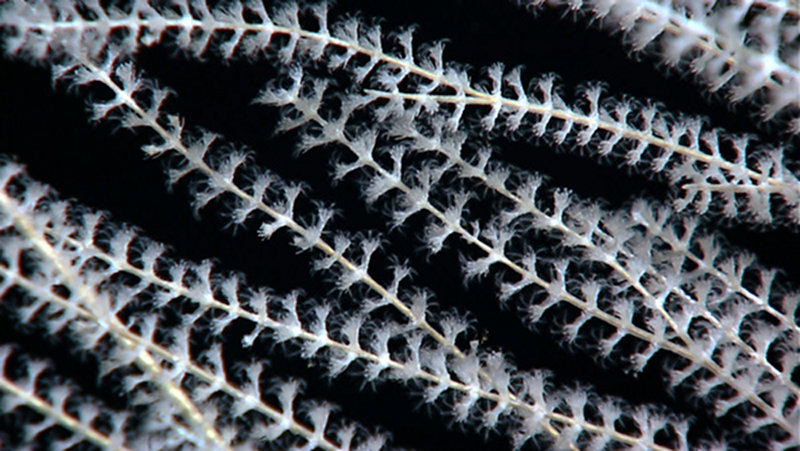 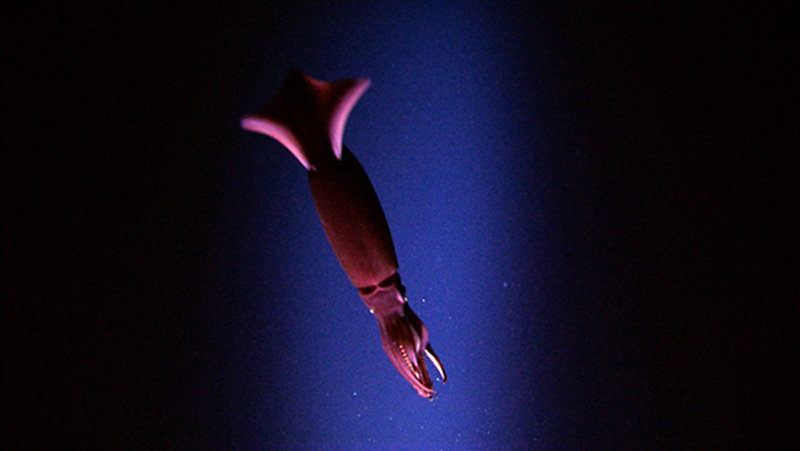 A squid flashes in front of Seirios' HD camera. Large schools of squid were commonly seen in the 'twilight zone' on descent and ascent of the ROVs. Image courtesy of NOAA Office of Ocean Exploration and Research. Download larger version (jpg, 1.3 MB).

The expedition completed the first multibeam bathymetric map of the GR axis from 101.3°W to 98.0°W, and a continuous CTD tow-yo and multibeam transect between 89.33°W and 85.75°W to locate active hydrothermal areas (Fig. 1). These operations were designed to complement a similar survey of the central GR from 94.9°W to 89.6°W (White et al., 2008). Our survey revealed at least 20 distinct water column anomalies along the eastern arm of the rift. This corresponds to an overall spatial density of hydrothermal plumes about twice that of the central GR (Baker et al., 2008). Venting was concentrated in two distinct areas at 88.56°W-88.09°W and 86.25°W-85.87°W (Fig. 1). The first was a 50 km-long area of contiguous, intense plumes rising as high as 250 m above the seafloor with an intense light-scattering signal between the seafloor and the top of the plume. Weaker plumes were common in a second area near the historical vent fields Rose Garden and Rosebud (Shank et al., 2003).

Figure 1. Hydrothermal plume surveys, bathymetric coverage (partial), CTD Tow Yo data, and ROV dive locations discovering hydrothermal vents during the GALREX 2011 Expedition. Dives at other locations discovered new seamount life on the Paramount Seamounts, and fields of sulfide mounds and their associated biological communities. The black sawtooth line, following the bathymetry of the seafloor, shows the CTD path raising and lowering above the seafloor through the water column. A light-scattering sensor on the CTD recorded changes in the relative concentration of hydrothermal “smoke” particles. The highest values are shown by the red contours. ORP anomalies caused by hydrothermal emissions such as H2S and dissolved Fe, identify the location of active venting. High-definition ROV imaging documented fresh lava flows and nascent vents hosting flocculent white microbial material and mobile fauna at Uka Pacha and Pegasus Vent fields west of the overlapping spreading center. Small tubeworms and mussels recruited to diffuse flow areas surrounded by large aggregations of live and dead clams at the Tempus Fugit Vent field. Image courtesy of NOAA Office of Ocean Exploration and Research. Download image (jpg, 142 KB).

Five ROV dives near 88.3°W, the location of the largest hydrothermal plume signal (Fig. 1), found recently-erupted lava flows spread over at least 14 km, and several regions of vigorous diffuse venting. At two sites, white flocculent material – potentially microbial in origin – issued from the vents in a “snow-blower” fashion. Two newly named vent fields, Uka Pacha and Pegasus, featured white microbial mats blanketing extensive areas along the base and sides of the axial graben (Fig. 1). Sessile fauna were not observed and mobile organisms were scarce, suggesting insufficient time since the creation of the vents for new colonists to arrive (Shank et al., 1998). Extinct hydrothermal sulfide chimneys over 30-m tall were discovered within 2 km of the active vents, indicating that the region previously experienced a substantial period of intense high-temperature venting.

Figure 2. Images of the Paramount Seamount biological communities and geological setting obtained during an ROV dive from the expedition. Column a) The deep slope of the seamount zone harbors a high abundance of primnoid and paramuricid gorgonians, antipatharian black corals, and their galatheid crabs associates. Column b) The shallow zone harbors a high diversity of different species of small primnoid gorgonians, bubblegum octocorals, and antipatharian black corals. High abundances of ophiuroid brittle stars occupy the surface of red minerals, which presumably are the remnants of an ancient shallow-water coral reef. Image courtesy of NOAA Office of Ocean Exploration and Research. Download image (jpg, 162 KB).

Three ROV dives at plume sites near 86°W discovered one of the largest vent fields known on the rift (~120 m × 40 m). The field, named Tempus Fugit, was characterized by diffuse venting in a once massive clam bed thought to be > 20 years old (based on the dissolution state of empty shells larger than 25 cm). In addition to mature live vesicomyid clams, siboglinid tubeworms and mytilid mussels, the high abundance of juveniles suggests that this site has seen multiple colonization events over time (Fig. 1). Clusters of scavenging dandelion siphonophores demarcated the site's periphery (Fig. 1). Active colonization was observed on relatively older pillow and lobate lavas ringed by large beds of dead clams (most with broken and dissolving). There were at least 13 species of vent-endemic fauna including potentially three species of tubeworms (maximum length of 70 cm). The lack of biota and presence of vitreous, unsedimented lobate lava flows observed at the Rosebud diffuse vent field (86.2°W), suggests that this site may have experienced an eruption subsequent to the last previous dive at the site in 2005.

Results of the GALREX 2011 cruise indicate abundant and recent hydrothermal and volcanic activity on two adjacent tectonic ridge segments, spanning more than 200 km of spreading axis. These findings not only reveal recent eruptive activity between 85°W and 89°W, they also indicate that the rates of hydrothermal habitat turnover via eruption, dike intrusion, or cessation of venting may be considerably higher than previously thought along the Galápagos Rift.

In addition to the exploration of the Rift, we for the first time explored a previously unmapped and biologically unknown seamount region hosting the Paramount Seamount (Fig. 2), 400 km north of the main islands. We discovered that this seamount hosts: 1) extremely abundant and diverse deep-water coral communities (many already expected to be new species); 2) a strongly pronounced break in faunal composition with depth (one of the most striking observed on a seamount), and 3) distinct faunal communities likely influenced by this seamount summit having been at shallower depths, subject to wave erosion, and the presence of drowned reefs as a result of sea-level rise.