By Kelley Elliott and Craig Russell

In this animation, a survey ship uses a multibeam sonar to measure the depth of the seafloor. The warm colors (red, orange, yellow) correspond to shallower water depths, while cooler colors (green, blue, purple) indicate deeper depths. Scientists use these depth measurements to create hi-resolution multibeam bathymetric maps that depict the accurate depth of the seafloor once they are corrected for refraction and the motion of the ship. Video courtesy of NOAA. Download (mp4, 10.7 MB).

Several years ago more than 50 scientists came together to discuss and recommend to NOAA how America’s “ship for exploration,” NOAA Ship Okeanos Explorer, should operate. Among the models suggested is one often referred to as a “sticks and boxes” approach. Priority exploration areas are put forth by the science community, representing priority “boxes” for exploration. The Okeanos Explorer travels to these priority “boxes” and systematically explores them using her core capabilities. Transits from one box to the next represent “sticks” in the model, and provide further exploration opportunities. 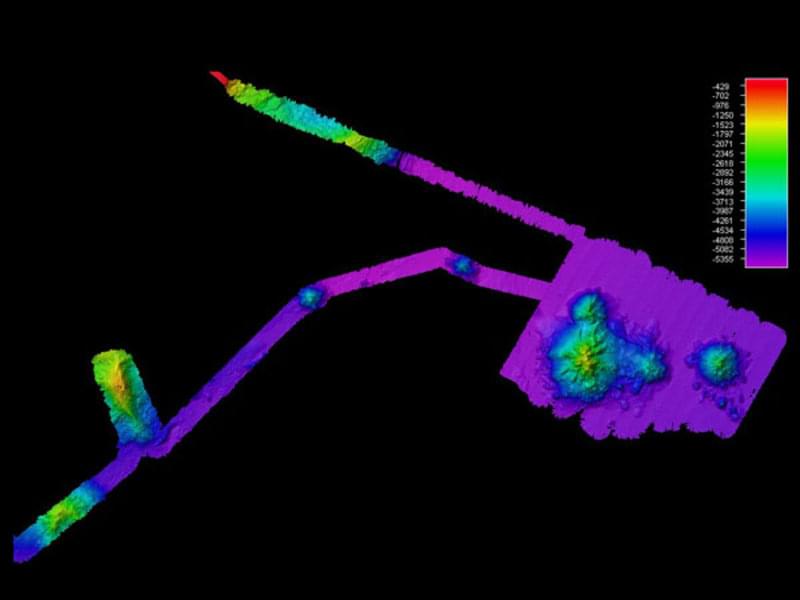 During 2009 field trials and the 2010 INDEX SATAL Expedition, Okeanos’ cruises focused on exploring “boxes.” Systematic exploration involves examining the area at different scales. The first step is to see what the area looks like by creating a map of the seafloor. Okeanos uses an EM302 multibeam sonar to create bathymetric maps of areas as deep as 7000 meters. Once the “box” is mapped, features of interest for further exploration can be identified. 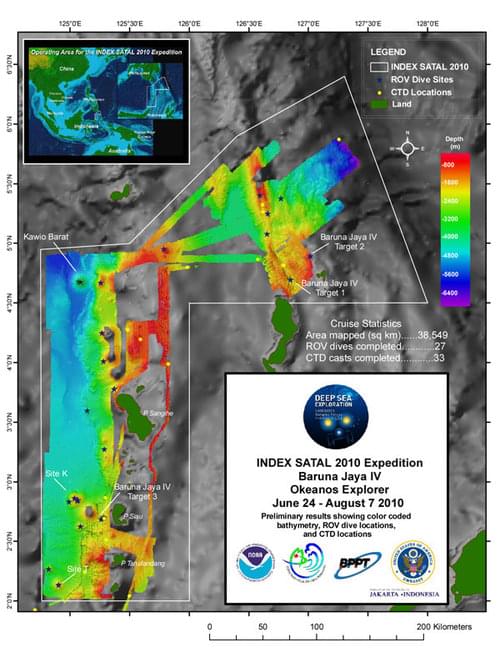 During the 2010 INDEX SATAL Expedition, Okeanos Explorer and the Indonesian Research Vessel Baruna Jaya IV focused on exploring “boxes.” This map summarizes operations conducted to systematically explore a priority “box” at different scales:  the area was mapped with multibeam sonar to help identify features of interest; CTD/Rosette casts were conducted to look for evidence of active venting; and finally, ROV dives were made to examine features of interest at a fine scale. Image courtesy of NOAA Okeanos Explorer Program, INDEX SATAL 2010. Download larger version (jpg, 129 KB).

The next step might be to sample the water column for evidence of chemical processes such as venting. Finally, the exploration team onboard and ashore will decide whether to deploy the Remotely Operated Vehicle (ROV). The ROV will spend enough time examining a feature so that scientists can generate interesting questions and develop a “sense of place", but will not linger long enough for those questions to be answered. After exploring a feature, the ship will move on to examine another feature in the “box” until the area is similarly explored, or time has run out for the ship to explore that particular area. 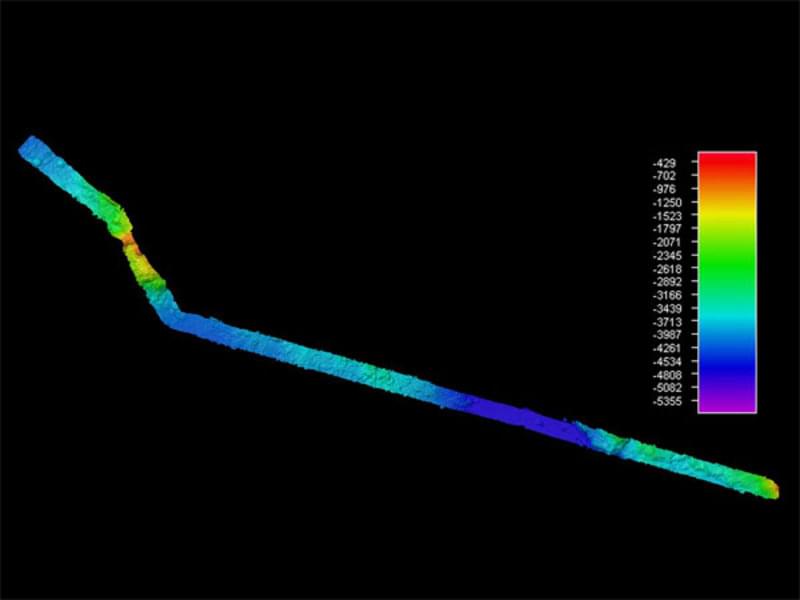 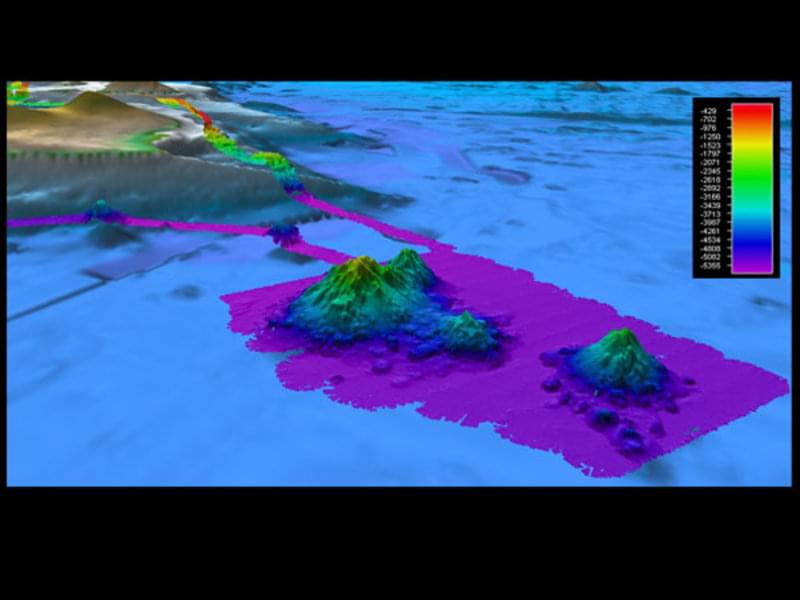 During INDEX SATAL 2010, we explored “boxes.” This cruise, however, offers the opportunity to take steps towards exploring one of many “sticks.” Transits between each “box” are truly exploration cruises and offer further exploration opportunities, such as the chance to examine oceanographic conditions over great distances or detect new seafloor features. 95% of the ocean remains unexplored. With so much remaining to be mapped and discovered, Okeanos Explorer conducts operational exploration transits, leveraging the opportunity to acquire data and information.

Multibeam data is acquired during nearly all of Okeanos Explorer’s cruises. Bathymetric data derived from satellite altimetry exists for the world’s ocean, however the scale is so large that only relatively large features are recognized. Bathymetric data created with the ship’s EM302 multibeam system is much more detailed, allowing us to image previously unknown features and gain a truer picture of what the seafloor actually looks like. In the last two years, the Okeanos Explorer team mapped at least three seamounts not shown in existing bathymetry or charts. The EM302 system also has the ability to image some features in the water column, like the active vents observed off the Mendocino Ridge. 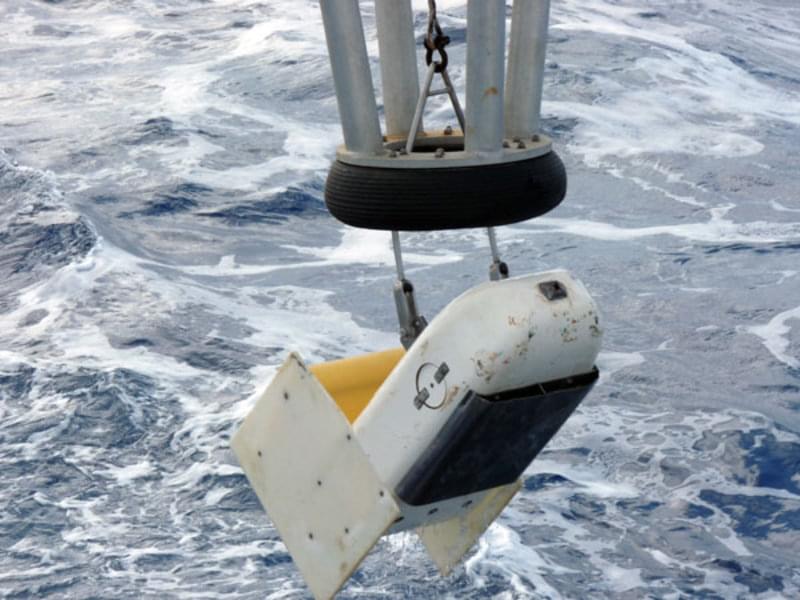 The Continuous Plankton Recorder is returned to the deck of the Okeanos Explorer after collecting plankton for over 300 miles. Image courtesy of NOAA Okeanos Explorer Program and NMFS. Download larger version (jpg, 79 KB).

The transits also offer the chance to do other exploration that fit within the “stick” model. During this cruise, two “surveys of opportunity” are being conducted: sampling plankton across the Pacific, and sampling for plastics to gain a greater understanding of the east-west extend of the “Garbage Patch.” 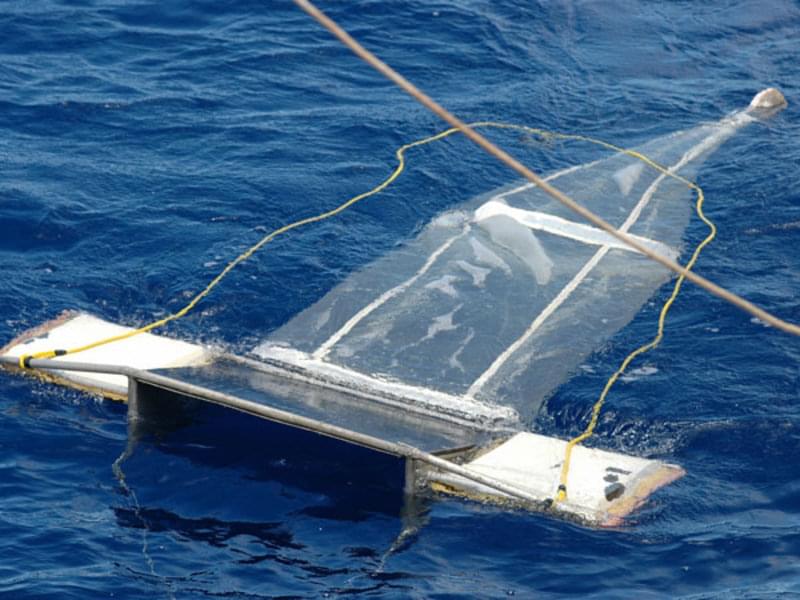 A device called a “Manta Net” will be used during the exploration cruise to sample seawater at the air-sea interface for plastics. The samples collected will allow scientists to gain a greater understanding of the characteristics and extent of the “Pacific Garbage Patch.” Image courtesy of Scripps Institution of Oceanography. Download larger version (jpg, 90 KB).

Sampling of plankton across the Pacific Ocean started with Okeanos’ previous cruise from Guam to Hawaii, when an instrument called a Continuous Plankton Recorder (CPR) was added to the operational mix. The CPR was towed behind the ship and about 10 meters below the water during the transit, continuously transferring plankton from seawater onto rolling silk screens that can be analyzed in the laboratory. After each cruise, these samples are analyzed to provide basic information on phytoplankton and the species composition of zooplankton – the base of the marine food web. This same instrument will be towed and collect samples from Hawaii to California. Together, the data will provide a picture of plankton diversity across more than 5,100 miles of the Pacific Ocean.

will also be conducted during the Hawaii to California cruise. During the cruise, an instrument called a “Manta Net” will be periodically towed at the ocean-air interface behind the ship where it will filter seawater and funnel bits of plastic and surface zooplankton into a sampling container on the device. While large pieces of debris do exist in the Garbage Patch, much of the small pieces of plastics it is composed of are not detectable by satellites or airplanes. Thus scientists who wish to conduct scientific sampling of the Garbage Patch must do so aboard ships travelling to this remote region. The data collected during this cruise will help to answer some of the basic questions about the Garbage Patch (i.e. How large is it? How is it distributed? How does it affect marine life?), so the situation can be better assessed, and questions such as “What can be done?” better addressed by follow-on research cruises on other research vessels.

Looking to the Future

Systematic exploration aboard NOAA Ship Okeanos Explorer is an evolving operational model. The variety of data being collected onboard Okeanos Explorer during this cruise from Hawaii to California represents a step forward in the exploration that can be conducted with the at-sea time allotted to the ship. Looking to the future we plan to add additional time to the “sticks” in our operational model so that newly detected features may be explored and more of the ocean may be characterized. 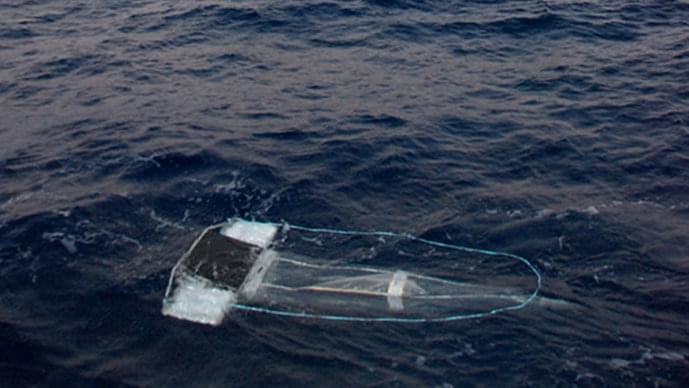 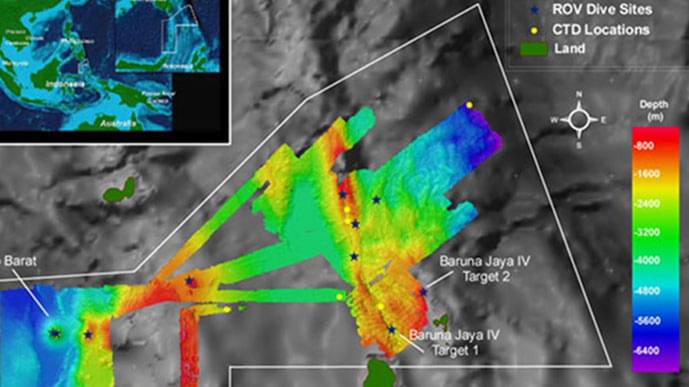 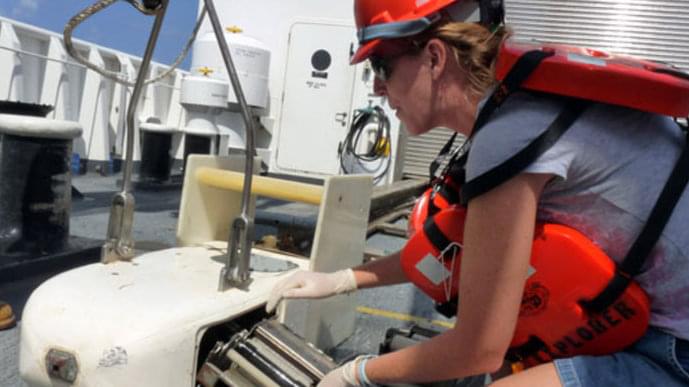