Black and Native American mariners worked aboard as essential crew

NOAA and partners today announced the discovery of the wreck of a 207-year-old whaling ship, called Industry, found on the bottom of the Gulf of Mexico. The remains of the 64-foot long, two-masted wooden brig opens a window into a little known chapter of American history when descendants of African slaves and Native Americans served as essential crew in one of the nation’s oldest industries.

During Dive 02 of NOAA Ocean Exploration’s 2022 ROV and Mapping Shakedown on NOAA Ship Okeanos Explorer, scientists on ship and shore explored the wreck of what they believed to be an historic 19th century whaler. Scientists from the Bureau of Ocean Energy Management and SEARCH Inc. provided coordinates and other information and narrated the dive from shore, live via telepresence. Artifacts documented during the dive include tryworks, an iron stove with two kettles that was used to render whale blubber into oil; two visible anchors; and bottles. Only one whaler is known to have been lost in the Gulf of Mexico between the post-American revolutionary period and the end of the 19th century. At the time of the dive, we didn’t know if this and the wreck were one and the same, but the data collected and further research have confirmed that this is very likely the remains of the brig Industry. Video courtesy of NOAA Ocean Exploration, 2022 ROV and Mapping Shakedown. Download largest version (mp4, 68. MB).

“This is an important discovery for American history,” said U.S. Deputy Secretary of Commerce Don Graves. “This 19th century whaling ship will help us learn about the lives of the Black and Native American mariners and their communities, and the immense challenges they faced at sea and on land.”

“Today we celebrate the discovery of a lost ship that will help us better understand the rich story of how people of color succeeded as captains and crew members in the nascent American whaling industry of the early 1800s,” said NOAA Administrator Rick Spinrad. “The discovery reflects how African Americans and Native Americans prospered in the ocean economy despite facing discrimination and other injustices. It is also an example of how important partnerships of federal agencies and local communities are to uncovering and documenting our nation’s maritime history.”

With guidance provided via satellite connection from partner scientists on shore, a team aboard NOAA Ship Okeanos Explorer piloted a remotely operated vehicle (ROV) to explore the seafloor on February 25, 2022, at a suspected location first spotted by an energy company in 2011 and viewed briefly by an autonomous vehicle in 2017, but never fully examined.

Armed with extensive research on Industry and the video from the ROV, the team of shoreside scientists led by James Delgado, senior vice president of SEARCH Inc.; Scott Sorset, marine archeologist for the U.S. Bureau of Ocean Energy Management (BOEM); and Michael Brennan, also of SEARCH Inc., have now confirmed that the wreck is most likely the brig Industry. 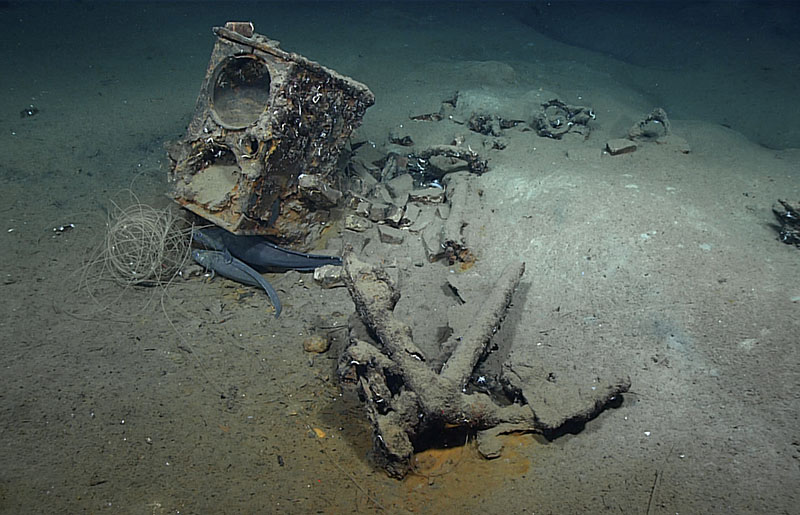 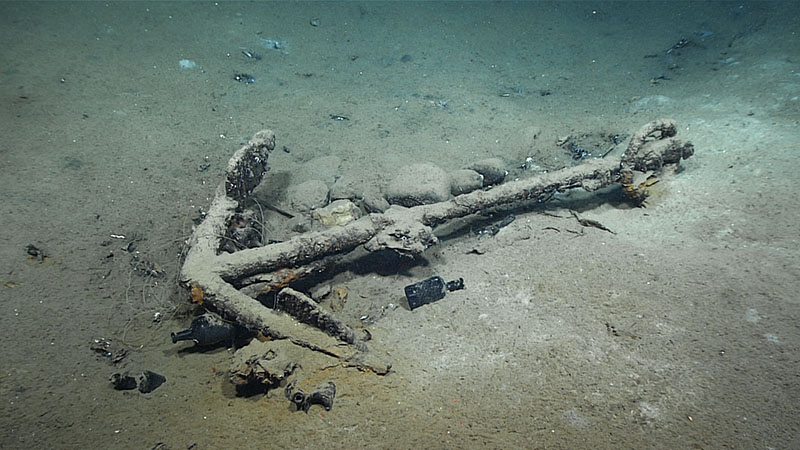 The whaling brig was built in 1815 in Westport, Massachusetts, and hunted whales across the Atlantic Ocean, the Caribbean, and the Gulf of Mexico for 20 years. It was lost when a strong storm snapped its masts and opened its hull to the sea on May 26, 1836. Industry was whaling primarily for sperm whales more than 70 miles off the mouth of the Mississippi River. It is the only whaling ship known to have been lost in the Gulf of Mexico out of 214 whaling voyages  from the 1780s to the 1870s.

While Industry eventually sank, there was some mystery about what happened to the crew. Thanks to new research by Robin Winters, a librarian at the Westport Free Public Library, the crew’s fate is finally clear. Winters tracked down a June 17,1836, article in the Nantucket Inquirer and Mirror that reported the crew of Industry was picked up at sea by another Westport whaling ship, Elizabeth, and crewmen were returned safely to Westport.

“This was so fortunate for the men onboard,” said Delgado, who worked closely with Winters and several other local historians to confirm the identity of Industry. “If the Black crewmen had tried to go ashore, they would have been jailed under local laws. And if they could not pay for their keep while in prison, they would have been sold into slavery.”

SEARCH Inc., working with BOEM, plans to nominate the wreck site for the National Register of Historic Places as part of a larger BOEM project, led by SEARCH, to document historic 19th century shipwrecks in the Gulf of Mexico.

“BOEM is proud to be a part of this important discovery,” said BOEM Director Amanda Lefton. “We work hard with our partners to safeguard historic and cultural treasures in the outer continental shelf.”

While the crew list for the last voyage of Industry disappeared when the ship sank, lists of crews from previous voyages describe crewmembers and officers as including Black people, Native Americans, White people, and multiracial people. The brig is connected to the life of Paul Cuffe , a mariner and entrepreneur whose father was a freed slave and mother was a Wampanoag Indian. Cuffe started whaling as a teenager and rose to become a successful ship builder, merchant, abolitionist, philanthropist, founder of an integrated public school, and among the leaders of a project to settle freed Black people in a new colony in Africa. His son William was a navigator on Industry and his son-in-law, Pardon Cook , was an officer on the brig and is believed to have made the most whaling voyages of any Black person in American history.

"The news of this discovery is exciting, as it allows us to explore the early relationships of the men who worked on these ships, which is a lesson for us today as we deal with diversity, equity, and inclusion in the workplace." said Carl J. Cruz, a New Bedford-based independent historian and a descendent of the family of Paul Cuffe.

“Finding Industry is an amazing opportunity to tell a much fuller story of Paul Cuffe’s accomplishments as a whaling captain, businessman, and social activist bent on finding a way to end the slave trade,” added Lee Blake, president of the New Bedford Historical Society who played a role in the development of the Captain Paul Cuffe Park  and an African American and Native American Heritage Trail . 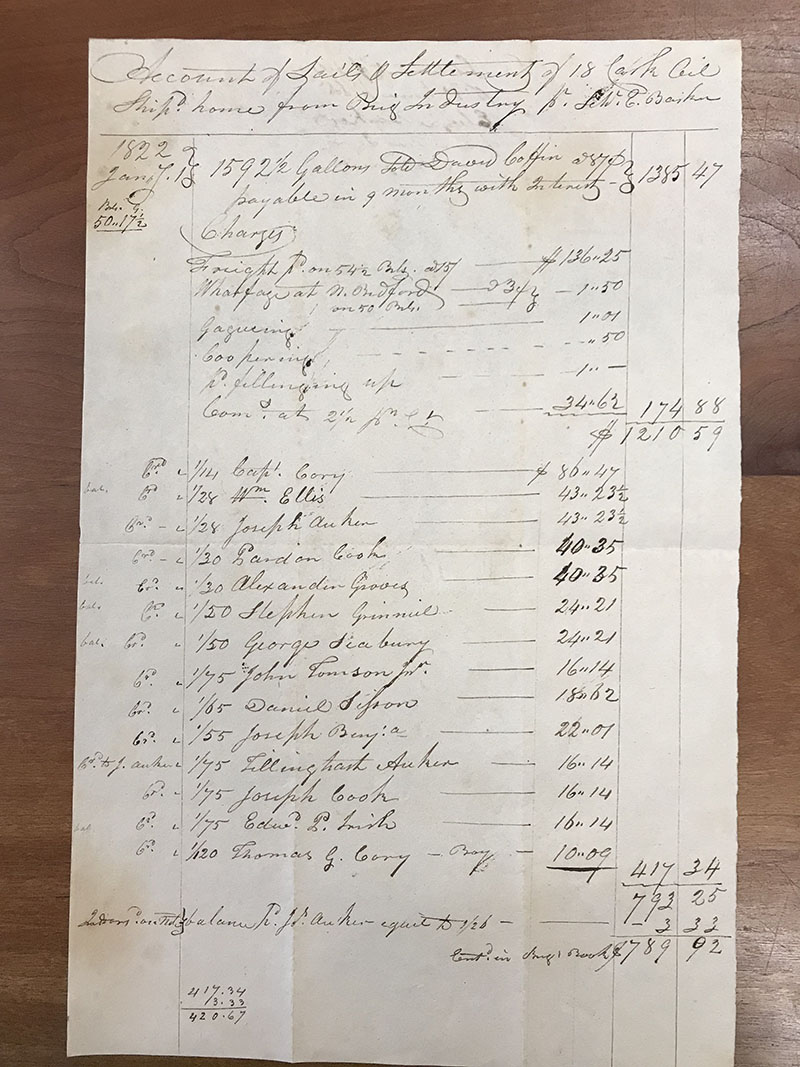 This 1822 settlement document for the brig Industry indicates payment due to Pardon Cook for his work aboard the whaler. Image courtesy of New Bedford Whaling Museum Library and Archives. Download largest version (3.2 MB). 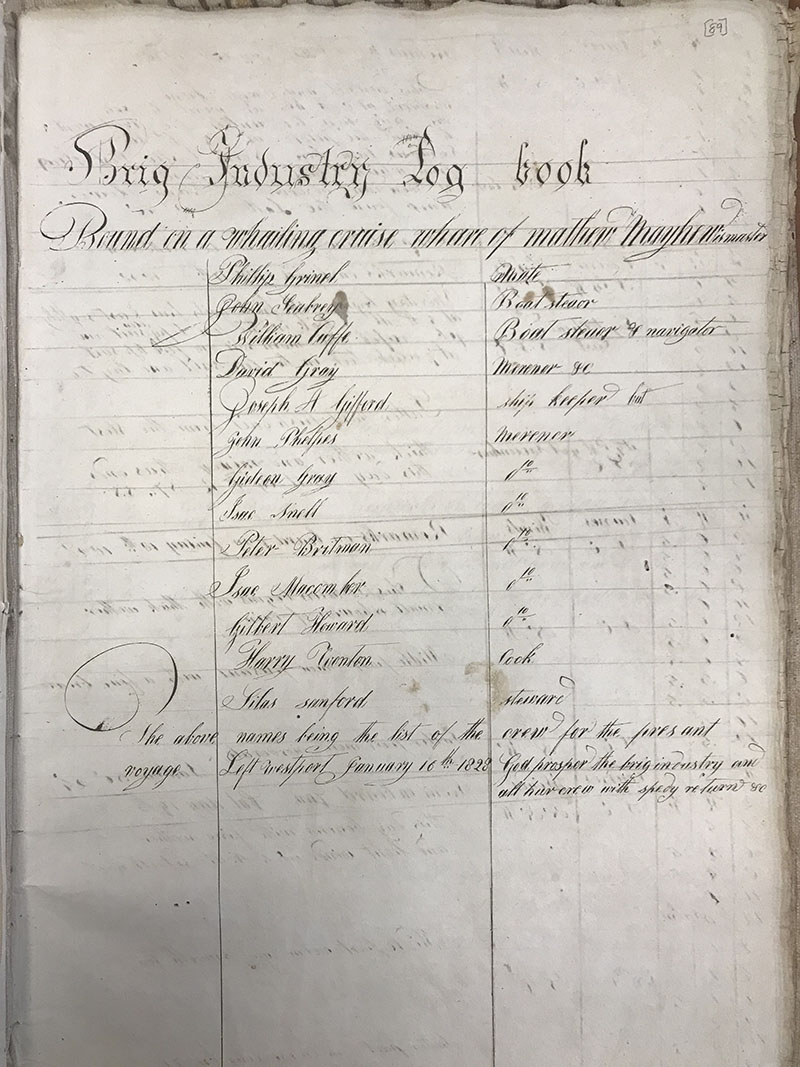 Delgado, Brennan and Sorset had a strong hunch about the identity of the whale ship prior to NOAA’s February ROV dive, but they needed a more thorough look and the expert documentation that NOAA could provide.

They were fortunate that NOAA Ocean Exploration called them to ask for potential shipwreck coordinates and that NOAA Ship Okeanos Explorer was already in the Gulf of Mexico testing new equipment. ROV pilots from the Global Foundation for Ocean Exploration captured high-resolution video to fully document the wreck site found 1,830 meters (6,000 feet) below the Gulf’s surface. The ROV hovered over the telltale tryworks, a cast iron stove with two large kettles used to render whale blubber into oil. The NOAA team confirmed the shipwreck’s measurements matched those of Industry in historic documents. And they determined that the location of the shipwreck, 72 nautical miles from the last recorded location off the mouth of the Mississippi River, could be attributed to the still-floating ship within the Gulf of Mexico’s Loop Current.

“That there were so few artifacts on board was another big piece of evidence it was Industry,” said Sorset. “We knew it was salvaged before it sank.” A whaling ship from the tight-knit Massachusetts community of whalers had visited the sinking Industry and removed 230 barrels of whale oil, parts of the rigging and one of the four anchors before it sank

A three-dimensional model of the Industry shipwreck site explored during the 2022 ROV and Mapping Shakedown expedition in the Gulf of Mexico. The model, developed by Bureau of Ocean Energy Management (BOEM) Marine Archaeologist Scott Sorset from a mosaic of images, shows the outline in sediment and debris of the hull of the 64-foot by 20-foot whaling brig. The tryworks and two anchors are also visible. To explore the shipwreck, click on the image to load the 3D model and use your mouse to turn the model and zoom in and out. Model created by BOEM using NOAA Ocean Exploration, 2022 ROV and Mapping Shakedown remotely operated vehicle video footage. Download a photomosaic of the shipwreck (12.7 MB).

Individual anchor followed by footage of the camboose/tryworks, an anchor, and fish imaged at the shipwreck site. Bureau of Ocean Energy Management archaeologists Jack Irion and Scott Sorset, and SEARCH archaeologists James Delgado and Michael Brennan discuss the site as the remotely operated vehicle pilots discuss maneuvering over and around the wreck. Download ProRes: 5.6 GB.

A closer look at the camboose/tryworks, including lettering on the side. The lettering was determined to be “E & G. W. Ashbridge,” manufacturers of iron stoves and cambooses (ship stoves). Download ProRes: 5.6 GB.