The West Coast continental shelf is known to host methane bubble streams, formerly thought to be rare. However, results of a recently published paper indicate that nearly 3,500 methane bubble streams, clustered into more than 1,300 methane emission sites, emanate from the seafloor from the Strait of Juan de Fuca in the north to the Mendocino Fracture Zone off northern California in the south, in an area known as the Cascadia Margin. Derived from data collected during multibeam mapping surveys on Exploration Vessel (E/V) Nautilus supported by NOAA Ocean Exploration, as well as the Research Vessel (R/V) Thompson and NOAA Ship Rainier and historical data, the discovery sheds new light on the extent and distribution of seafloor methane seeps. These seeps may provide important habitat for marine life and could play an important role in ocean warming.

The results , published in the scientific journal Frontiers of Earth Science by scientists from the Oregon State University-NOAA Cooperative Institute for Marine Resources Studies (CIMRS), University of Washington, U.S. Naval Research Lab at Stennis Space Center, and Ocean Exploration Trust, provide a major contribution to the first systematic “baseline” survey of methane seeps published over such a large area, representing over 40% of the 93,000 square kilometers (35,900 square miles) of the U.S. Cascadia margin.

Until recently, the number and distribution of methane seep sites in the northeast Pacific across depth and latitude was very poorly known, with previous estimates of methane seeps, based largely on historical fisheries survey data, suggesting about a thousand seeps existed along the U.S. Cascadia Margin.

In the Frontiers of Earth Science paper, scientists present the analyses of detailed seafloor and co-registered acoustic water column data from eight large-scale multibeam sonar surveys on the U.S. Cascadia Margin with previous historical data. The analyses resulted in a remarkably detailed view of where the 3,500 bubble streams (clustered into 1,300 methane emission sites) are located as well as the seafloor features associated with the seeps.

The methane sites are concentrated in water depths less than 800 meters (2,625 feet), although sites are also found in water as deep as 2,070 meters (6,790 feet) and as shallow as 40 meters (130 feet). In waters along the Cascadia Margin, methane hydrate is stable at depths greater than about 500 meters (1,640 feet) and is unstable at shallower depths.

The importance of these methane seeps goes beyond the numbers. These seeps host chemosynthetic communities, build rocky carbonate hard grounds that are essential fish habitat, and release an unknown quantity of methane to the ocean and potentially to the atmosphere, where it acts as a powerful greenhouse gas. This new seep compilation provides a baseline to evaluate possible future increasing methane gas flux as ocean waters warm and drive what is known as the methane hydrate stability zone deeper, releasing additional methane from its ice-like form. 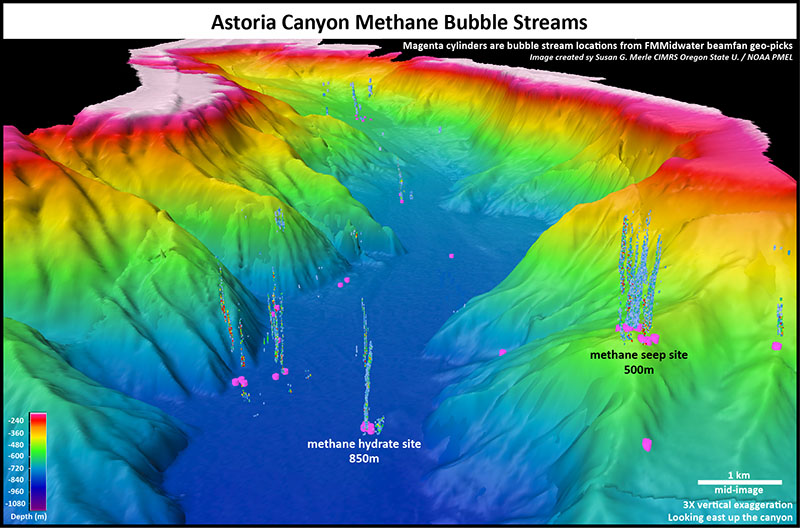 As methane seeps are likely ubiquitous on most or all continental margins, this study literally provides a map for more detailed studies of the ecological importance of methane seeps along the west coast of the United States.

What’s next: This summer and fall, some of the co-authors and other members of NOAA Pacific Marine Environmental Laboratory (PMEL), University of Washington, and Oregon State University will participate in another Nautilus Cascadia Margin expedition as well as in the West Coast Ocean Acidification expedition aboard NOAA Ship Brown. More data will be acquired for addition to this new database in order to better understand any potential impacts of methane seeps in the water column and to test new technologies

Access the full article to learn more about these findings.