Two years ago, during Windows to the Deep 2019, NOAA Ocean Exploration conducted a multibeam survey in the area where oil tanker SS Bloody Marsh was reportedly sunk by torpedo in July 1943. Unfortunately, when the expedition team used a remotely operated vehicle (ROV) to explore a possible target identified through this survey, they found it to be a rock outcrop. This time, during Windows to the Deep 2021, they had better luck.

Bloody Marsh was a T2-SE-A1 oil tanker built in 1943 in Chester, Pennsylvania, by Sun Shipbuilding and Dry Dock Company. It was on its maiden voyage from Houston to New York with a cargo of 106,496 barrels (4,472,832 gallons) of oil. While steaming off the coast of South Carolina on July 2, 1943, a torpedo from German submarine U-66 struck the aft port side, destroying the engine room and killing three of the crew. The rest of the crew and armed guards on the ship boarded life rafts and escaped. A second torpedo struck the port side amidships and broke the tanker in two, sinking it quickly. U-66 surfaced to view the sinking ship and struck one of the lifeboats, knocking the sailors into the sea before leaving the scene.

As one of 87 shipwrecks listed on NOAA’s Potentially Polluting Wrecks list, it was important to find Bloody Marsh and get an ROV on site to identify the wreck and assess it for pollution risk. About a month after the ROV dive in 2019, a colleague at the Bureau of Ocean Energy Management, Jack Irion, passed on some information from a study of surface oil slicks found through satellite imagery. The researchers found a repeating slick in the area of Bloody Marsh off South Carolina. I submitted a new survey area to NOAA Ocean Exploration based on this information, and while surveying in the area this past summer, they found a shipwreck-like target in the multibeam data 4 kilometers (2.5 miles) downstream of where the oil slicks originated at the surface. 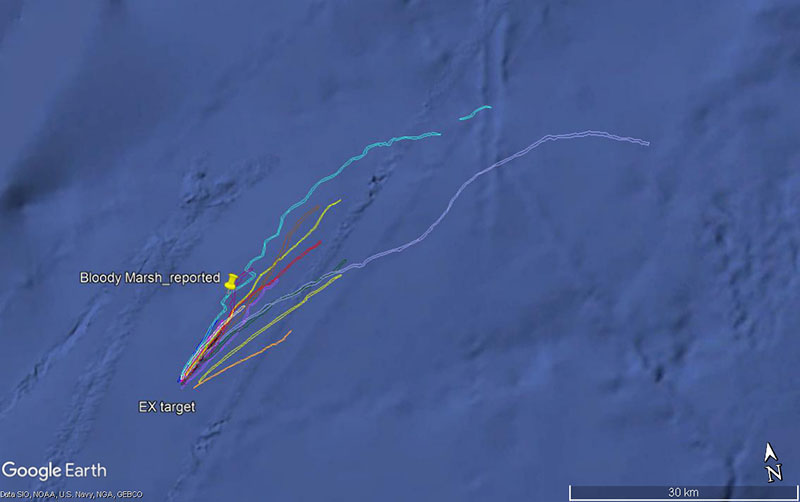 This Google Earth map shows surface oil slick plots reported from satellite imagery from 1997 to 2019 along with the historic reported sinking position of SS Bloody Marsh and the target ultimately found during Dive 02 of Windows to the Deep 2021. Image courtesy of NOAA Ocean Exploration, Windows to the Deep 2021, CGG Satellite Mapping. Download largest version (274 KB).

The objective of Dive 02 of Windows to the Deep 2021 was to locate this multibeam target and hopefully identify it as both the wreck of Bloody Marsh and the source of the oil slicks. This area of the North Atlantic can have strong currents due to the Gulf Stream, so we knew that conditions at the site would be challenging. The ROV pilots cautiously and skillfully approached the seabed and the target, ensuring the ROVs were kept at a safe distance.

Eventually, the target came into view. First on ROV Deep Discoverer’s scanning sonars, and then on the cameras. The first items we saw were scattered corroded metal plate, pipe, and other debris. Angling the ROV to the left, we then found the immense hulk of an overturned steel ship and proceeded to move laterally along its starboard side. This area of the stern showed signs of accelerated corrosion with holes through the hull into the rooms below and appeared to be the area of the engine room where the first torpedo struck. We soon noted that the hull plates were welded and not riveted (earlier tankers were built with rivets), which was the first sign that this was Bloody Marsh. 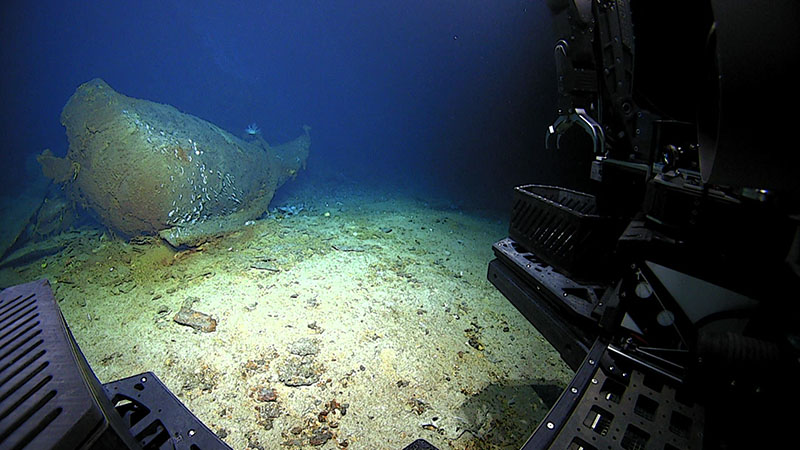 A shipwreck comes into view at the start of Dive 02 of Windows to the Deep 2021. Further exploration of the wreck throughout the dive revealed that it is likely the remains of SS Bloody Marsh, an oil tanker that was sunk by a German U-boat off the coast of South Carolina in 1943. Image courtesy of NOAA Ocean Exploration, Windows to the Deep 2021. Download largest version (1.1 MB). 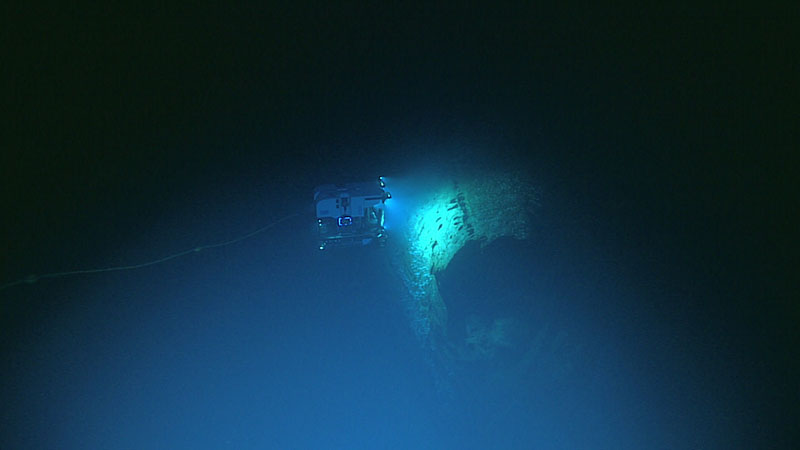 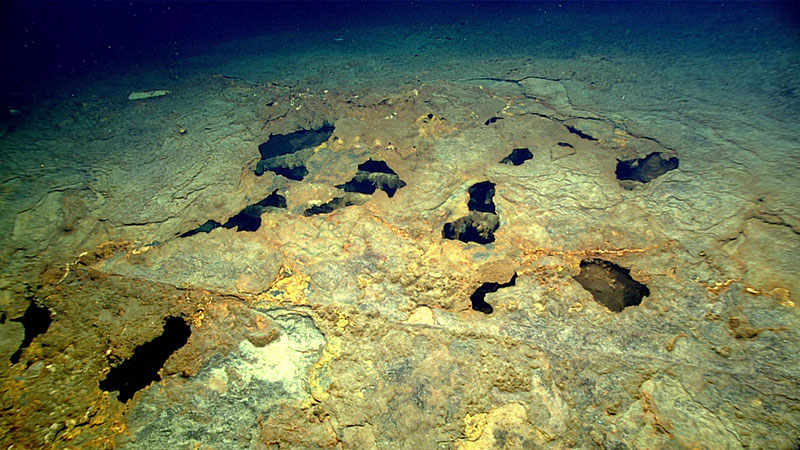 Corrosion in the hull of the shipwreck explored during Windows to the Deep 2021 provides glimpses into the rooms in the interior of the ship. The shipwreck was explored during Dive 02 of the expedition and, based on evidence seen during the dive, experts believe it is the wreck of SS Bloody Marsh. Image courtesy of NOAA Ocean Exploration, Windows to the Deep 2021. Download largest version (1.6 MB). 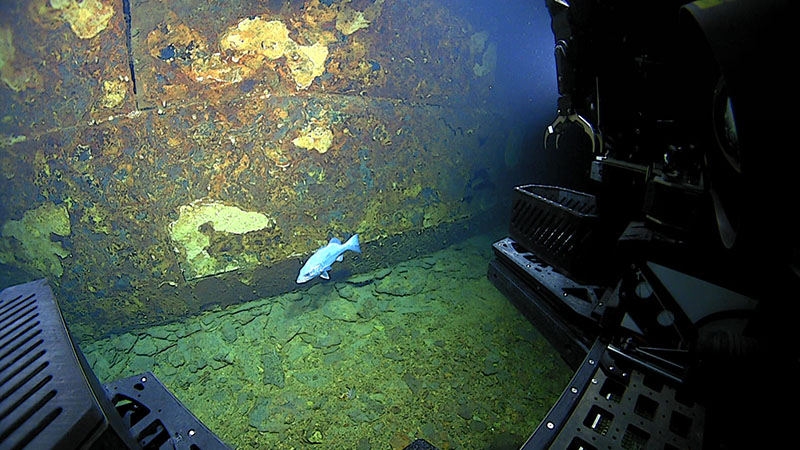 Close inspection of the shipwreck explored during Dive 02 of Windows to the Deep 2021 showed that the seams along the hull lacked rivets and were welded together, which is consistent with the construction of mid-1940s tankers like SS Bloody Marsh. Image courtesy of NOAA Ocean Exploration, Windows to the Deep 2021. Download largest version (1.2 MB).

As we continued down the length of the hull, the corroded holes ended and the hull looked more intact and structurally solid. This was where the cargo tanks were, and these would corrode more slowly because seawater was not on the inside as it was in the engine room. The participating biologists noted that there were small white soft corals across the site that seem to all be of a similar size, suggesting one colonization event, which we know was sometime after 1943. The bottom of the hull was relatively flat, and we observed a stabilizing keel at one point at the turn of the hull.

This large length of overturned hull ended abruptly with some broken steel plating at the spot where the second torpedo struck cargo tank 3. The bow and forward tanks were nowhere to be seen, despite the team’s use of the scanning sonars on Deep Discoverer to look in all directions from multiple parts of the wreck. It’s possible that the bow section broke off and floated in the current some distance before settling to the seabed; the forward cargo tanks were reportedly empty at the time of the sinking. Based on a review of the ROV track, the navigator aboard NOAA Ship Okeanos Explorer reported that the length of the hull section was about 90 meters (295 feet), which correlates with the length of the tanker between where the two torpedoes reportedly struck.

Given the location of this wreck, the oil slicks observed upstream of it, the welded joinery and general appearance of the wreck as that of a T2 oil tanker, and the matching of the length of the hull section with the torpedo damage, I am confident that this is the wreck of SS Bloody Marsh. While we did not observe any oil actively leaking, the documented slicks appeared periodic and are likely intermittent as parts of the wreck corrode and weaken. Overall, however, the hull section appears relatively intact and not in danger of imminently failing catastrophically. Further survey could locate the bow section, which could also contain at least one pair of intact cargo tanks and would help complete the story of this shipwreck.