In 2015, the NOAA Office of Ocean Exploration and Research (OER) was leading an expedition on NOAA Ship Okeanos Explorer approximately 40 kilometers (25 miles) off the coast of Puerto Rico, when OER’s remotely operated vehicle, Deep Discoverer, was used to image an unusual ctenophore, or comb jelly, that was new to scientists participating in the expedition from shore. In a recently published paper, NOAA Fisheries scientists describe and document the ctenophore as a new genus and species. This marks the first time NOAA has used only video to designate a new genus and species, demonstrating this as a viable approach to identifying novel animals imaged during deep-ocean exploration without the costly and invasive requirement of in situ sample collection. The discovery also highlights the value of telepresence in terms of enhancing opportunities for collaboration and partnership in exploring our ocean, allowing for real-time discoveries no matter where in the world a scientist may be located. 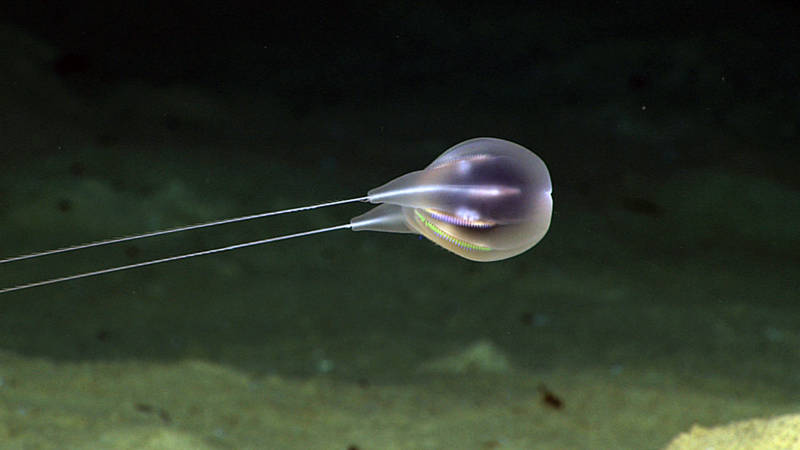 A NOAA Fisheries research team discovered Duobrachium sparksae, a new species of ctenophore, or comb jelly. The discovery was made during an underwater expedition led by the NOAA Office of Ocean Exploration and Research. The new species and a new virtual method of describing and documenting the discovery are both explained in Plankton and Benthos Research .

Most comb jellies have eight rows of comb-like cilia that rhythmically beat, refracting light into colors, as they paddle through the water. Between 100–150 species of comb jellies have been identified and validated. They are all carnivores and many are highly efficient predators that eat small arthropods and many kinds of larvae. Although they look similar, comb jellies and jellyfish are not closely related.

Deep Discoverer, a remotely operated vehicle (ROV) captured high-definition video of the new ctenophore species during a 2015 dive off the coast of Puerto Rico. NOAA Fisheries scientists Mike Ford and Allen Collins, working shoreside, spotted it and recognized it as novel. This marks the first time NOAA scientists exclusively used high-definition video to describe and annotate a new creature.

Watch video of the first encounter with the newly discovered ctenophore:

“It’s unique because we were able to describe a new species based entirely on high-definition video. The cameras on the Deep Discoverer robot are able to get high-resolution images and measure structures less than a millimeter. We don’t have the same microscopes as we would in a lab, but the video can give us enough information to understand the morphology in detail, such as the location of their reproductive parts and other aspects,” said Collins.

No physical samples were collected, so the videos are our only evidence of the species’ existence. “We didn’t have sample collection capabilities on the ROV at the time. Even if we had the equipment, there would have been very little time to process the animal because gelatinous animals don’t preserve very well; ctenophores are even worse than jellyfish in this regard. High-quality video and photography were crucial for describing this new species,” Collins explained.

During their exploration, the scientists made three video observations of the comb jelly from their shoreside control room. “It was a beautiful and unique organism,” said Ford. “We collected high-definition video and described what we saw. We went through the historical knowledge of ctenophores and it seemed clear this was a new species and genus as well. We then worked to place it in the tree of life properly.”

“Naming of organisms is guided by international code, but some changes have allowed descriptions of new species based on video—certainly when species are rare and when collection is impossible,” Ford explained. “When we made these observations, we were 4,000 meters down, using a remote vehicle, and we did not have the capabilities to take a sample.”

“Video identification can be controversial,” Collins added. “For example, some insect species descriptions have been done with low-quality imagery and some scientists have said they don’t think that’s a good way of doing things. But for this discovery we didn’t get any pushback. It was a really good example of how to do it the right way with video.”

Based on the video evidence, the scientists observed some fascinating behavior. “The ctenophore has long tentacles, and we observed some interesting movement. It moved like a hot air balloon attached to the seafloor on two lines, maintaining a specific altitude above the seafloor,” Ford said. “Whether it’s attached to the seabed, we’re not sure. We did not observe direct attachment during the dive, but it seems like the organism touches the seafloor.”

There’s still much to learn about the new species. “We’re not sure of their role in the ecosystem yet,” Ford said. The scientists saw the specimens just long enough to get a visual look and describe the species, but their unknown ecological role is exciting to contemplate. “We can consider that it serves similar roles to other ctenophores near the ocean floor and it also has some similarities to other ctenophores in open ocean areas. We saw the species three times in a relatively small area; hopefully that means they’re not extremely rare.”

The videos will now serve as the type material, or “specimens,” upon which the description and name of the species are based for the newly identified ctenophore. The videos are now part of the Smithsonian National Museum of Natural History Collection and publicly accessible.