What is the difference between photosynthesis and chemosynthesis?

The majority of life on the planet is based in a food chain which revolves around sunlight, as plants make food via photosynthesis. In the deep ocean, however, there is no light and thus there are no plants; so instead of sunlight being the primary form of energy, chemical energy is produced via chemosynthesis. Places with chemosynthetic organisms can become oases of life in an environment often otherwise depleted of food. Video courtesy of NOAA Ocean Exploration, Gulf of Mexico 2017. Download larger version (mp4, 108.2 MB).

Ecosystems depend upon the ability of some organisms to convert inorganic compounds into food that other organisms can then exploit (or eat!). The majority of life on Earth is based on a food chain which revolves around the Sun, as plants use sunlight to make food via photosynthesis. However, in environments where there is no sunlight and thus no plants, organisms instead rely on primary production through a process called chemosynthesis, which runs on chemical energy. Together, photosynthesis and chemosynthesis fuel all life on Earth.

Photosynthesis occurs in plants and some bacteria, wherever there is sufficient sunlight, be it on land, in shallow water, or even inside and below clear ice. All photosynthetic organisms use solar energy to turn carbon dioxide and water into sugar (food) and oxygen: CO2 + 6H2O -> C6H12O6 + 6O2.

Chemosynthesis occurs in bacteria and other organisms and involves the use of energy released by inorganic chemical reactions to produce food. All chemosynthetic organisms use energy released by chemical reactions to make a sugar, but different species use different pathways. For example, at hydrothermal vents, vent bacteria oxidize hydrogen sulfide, add carbon dioxide and oxygen, and produce sugar, sulfur, and water: CO2 + 4H2S + O2 -> CH20 + 4S + 3H2O. Other bacteria make organic matter by reducing sulfide or oxidizing methane.

Our knowledge of chemosynthetic communities is relatively new, brought to light by ocean exploration when humans first observed a vent on the deep-ocean floor in 1977 and found a thriving community where there was no sunlight. Since then, chemosynthetic bacterial communities have been found in hot springs on land and on the seafloor around hydrothermal vents, cold seeps, whale carcasses, and even sunken ships. No one had ever thought to look for them, but these communities were there all along.

Chemosynthetic Communities in the Gulf of Mexico 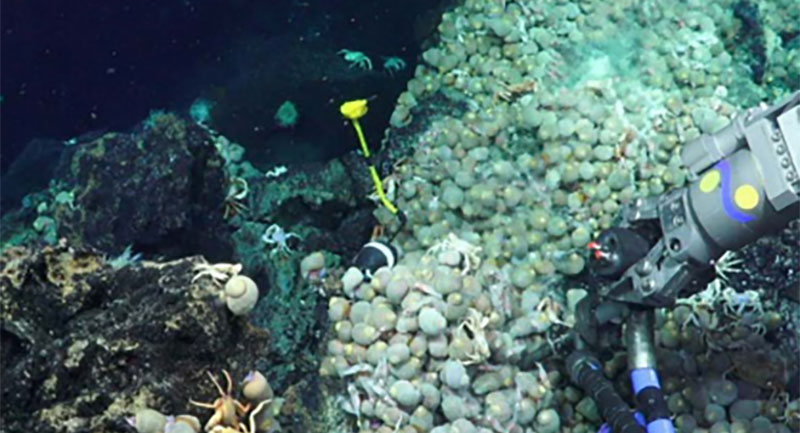 An Update on Cold Seeps in the Northwestern Atlantic Ocean