Hoyt is a maritime archaeologist and the National Coordinator for NOAA's Office of National Marine Sanctuaries Maritime Heritage Program. He specializes in archaeological recording of deep water shipwrecks has worked on several NOAA projects in the Thunder Bay, Florida Keys and Monitor National Marine Sanctuaries since 2001. In 2004, he was awarded the North American Rolex Scholarship through the Our World Underwater Scholarship Society. He has worked on underwater archaeology projects in North and South America, Europe, the Great Lakes, Atlantic and Pacific Oceans, and several inland rivers. Joe is also an avid underwater photographer and technical diver, and has crewed documentary expeditions on BBC's Planet Earth and PBS. For the last 10 years Hoyt has been the Chief Scientist on a multifaceted wide area investigation of WWII era shipwrecks lost off the coast of North Carolina. In 2014 Hoyt led a team of researchers that discovered the final resting place of a WWII Battlefield off the coast of North Carolina, consisting a German U-boat, U-576 and its victim, a Nicaraguan flagged freighter Bluefields. Hoyt earned an MA in Maritime History and Nautical Archaeology from East Carolina University and serves on the Advisory Council for Underwater Archaeology.

Professor Nathan Richards is director of East Carolina University’s Program in Maritime Studies (Department of History). He has 25 years of experience in maritime archaeology, including projects involving the use of archaeological remote sensing techniques and technologies. Richards served as the Program Head for the UNC Coastal Studies Institute’s Maritime Heritage Program while a joint appointment with ECU’s Department of History from 2011-2018. Over this period he lived on North Carolina’s Outer Banks and concentrated on studying the maritime history and archaeology of the state’s NE coastal region, and contributed to NOAA’s Battle of the Atlantic expeditions between 2008 and 2018. Nathan serves as the co-Principal Investigator of the Wimble Shoals Project.

Allyson Ropp is a maritime archaeologist with the Program in Maritime Studies at East Carolina University. She has experience in discovering, investigating, and researching cultural heritage in marine environments including North Carolina, Florida, Vermont, Costa Rica, and the Pacific Islands. She is interested in public archaeology and community engagement, climate change impacts and mitigation of submerged cultural heritage sites, and North Carolina maritime history.

Jeremy Borrelli is the Staff Archaeologist for the East Carolina University Program in Maritime Studies. His primary duties at ECU are to help coordinate fieldwork logistics and maintain the program’s collection of research equipment. Jeremy has experience in terrestrial and maritime archaeology, and over the past decade he has worked on archaeological projects in North Carolina, New York’s Hudson Valley, the Great Lakes, Africa, and the Caribbean. Before joining ECU, he worked as a maritime archaeologist for the Queen Anne’s Revenge Shipwreck Project at the QAR Conservation Laboratory and NC Underwater Archaeology Branch.

Madeline Roth is a maritime archaeologist with the NOAA Office of National Marine Sanctuaries' Maritime Heritage Program. She received her graduate degree in Maritime Studies from East Carolina University, where she cultivated an interest in submerged battlescapes, WWII heritage, and resource management. Past projects in the Caribbean, Africa, United States, and the Pacific led her to NOAA where she has continued to follow her passions. As a current NOAA researcher, her focus is on heritage management and field operations. On the project, she will be working with remote sensing instruments to characterize the shoal.

Dr. Chris Taylor is an ecologist with NOAA's National Centers for Coastal Ocean Science Habitat Mapping Team. He leads the marine ecosystem acoustics group at the NOAA's Beaufort Laboratory in North Carolina. His research uses underwater acoustics and optical methods to improve assessments for fish and their ocean habitats. During this exploration for the sunken ship Mirlo, Chris is leading seafloor habitat and fish community interpretation using the watercolumn echosounders. Due to COVID, the team set up the system on the ship and is monitoring progress remotely.

Erik Ebert is a research technician with CSS and contracted by the National Center for Coastal Ocean Science (NCCOS) to support seafloor habitat mapping and characterizing marine ecosystems. He has 10 years of research experience in the marine environment using scientific echosounders and sonars, scuba, and remotely operated vehicles to provide assessments of ocean habitats for ecosystem management and spatial planning. For this exploration, he is leading the analysis of the watercolumn echosounder and seafloor imagery to characterize the seabed habitats and fish communities that may be using the sand shoals, shipwrecks and rocky reefs. 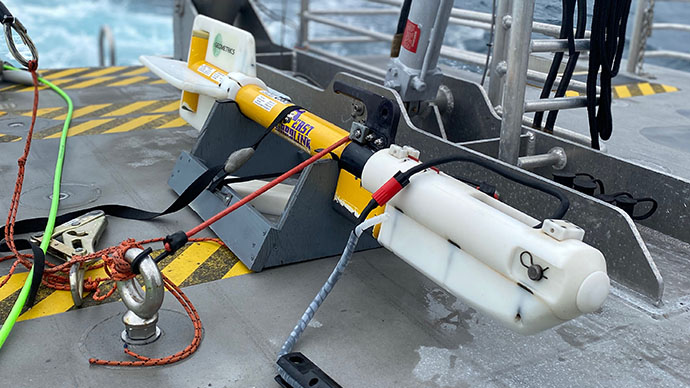 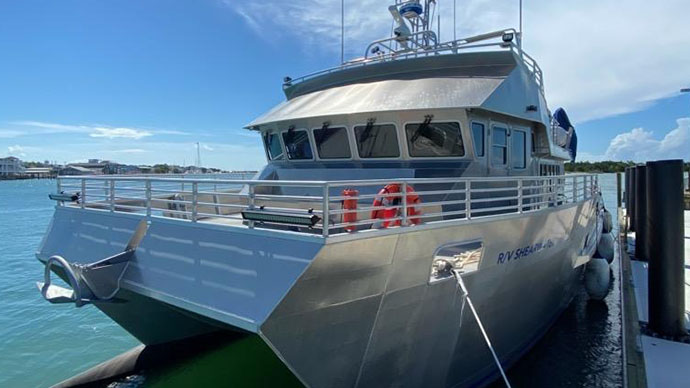