The 2019 DEEP SEARCH mission was a great success. We battled some stormy weather that forced us to run and adapt our plans, but the whole team worked together and did an exceptional job in pulling off this complex research expedition.

We continued our work on the deep-water coral reefs off of South Carolina, exploring new habitats, conducting some intensive sampling, and verifying some of our conceptual models of where the corals live and thrive. The data from the benthic lander and the CTD casts from the reef complex will provide critical oceanographic data to understand the conditions at these sites. During the remotely operated vehicle (ROV) dives, there was a strong thermocline, a sharp boundary between water masses of different temperatures, at the same depths as the highest cover of live corals. It is possible that internal waves pass along this boundary and help to deliver food to the corals, leading to their vigorous growth and the formation of the long linear reef features that we mapped and first dove on last year. Substrate across these sites varied considerably in texture and apparent composition reflecting changes on exposed lithologies and changes in bottom current strength.

At Richardson Hills, the DEEP SEARCH team observed this crinoid on a Madrepora coral. Crinoids are filter feeders, like the corals, and may also benefit from the sharp thermocline we observed at the site. Image courtesy of Ivan Hurzeler and DEEP SEARCH 2019 - BOEM, USGS, NOAA, ROV Jason, ©Woods Hole Oceanographic Institution. Download larger version (jpg, 5.3 MB).

Further to the north, we explored a submarine canyon that breaches the southern U.S. Atlantic continental shelf break. A long ROV dive here revealed eroded walls, defined by thick sculpted outcrops separated by stronger interbedded layers forming sharp overhangs, covered in cup corals and octocoral sea fans that create habitat for a variety of fishes and octopuses. Corals appeared all along the walls and in a diversity that had not been documented before. The lander that was deployed at Pamlico Canyon continues to collect data to understand the current dynamics and oceanography inside these complex systems.

Finally, we visited the seeps of the region. This began with the shallower (~300 meter depth) seeps to the north along the continental shelf break. Our exploration of these recently discovered seeps revealed that they are more complex and dynamic systems than we previously understood. The carbonates that are produced as a by-product of methane oxidation provide hard substrate for deep-water coral settlement, which in turn increases the complexity of the habitat that harbors a diverse fish assemblage. While examining and collecting these carbonates for compositional and formational comparison to other seeps on the margin, we discovered a few vestimentiferan tubeworms, which had never been observed in this part of the Atlantic before. We also found Acharax bivalves, hidden from view, dwelling deep in the mud, but known to reside in seep environments elsewhere. The observations of tubeworms and Acharax bivalves—plus the numerous fish—expand our understanding of the diversity supported by these underexplored seep environments. The ties between these seep habitats and the surrounding south and mid-Atlantic ecosystem are only beginning to be revealed.

The deeper seeps at the Blake Ridge and Cape Fear sites were sampled intensively and will provide a good comparison with the shallower seeps. We will continue to study the biogeochemistry that drives these systems, and compare the types of microbes that live there, the chemical reactions they carry out, and the geological processes that shape the environment. The symbiotic mussels and clams at these sites have their own processes and communities associated with them, and these are in stark contrast to the shallower seeps that lack these types of symbioses. Extensive tubular (open aperture) concretion complexes at Cape Fear were seen for the first time, and we have a handful of samples of these features providing the opportunity to investigate their formation and preservation.

A tired but satisfied group of scientists, ROV pilots, and engineers returned to port on April 30, while the crew and officers of the Ronald H. Brown soon headed off for their next mission. The samples and data collected will require years of analysis and interpretation to understand the complete story of this region. Even then, the conclusions reached typically lead to more questions than answers. But we are sure that we will be able to provide the best possible science on which to base management decisions for this region in the years to come. 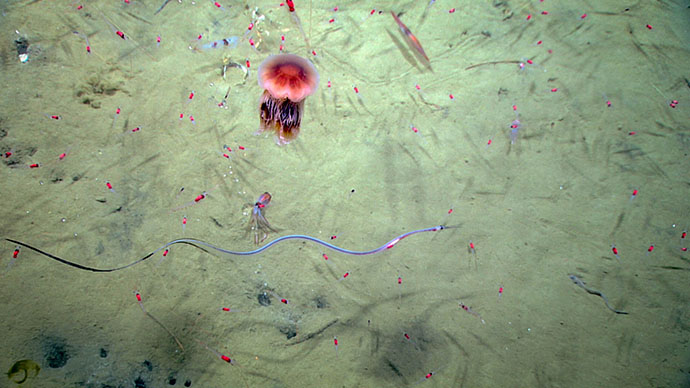 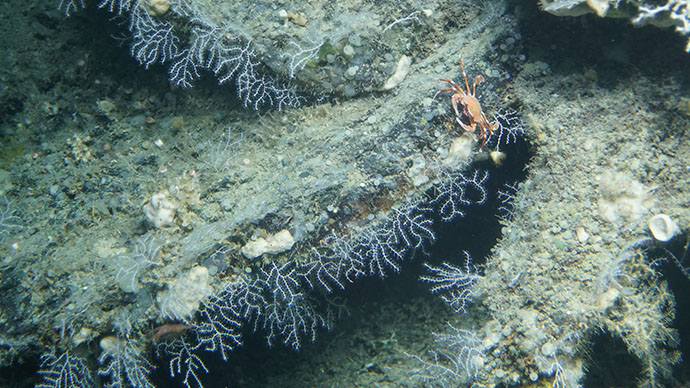 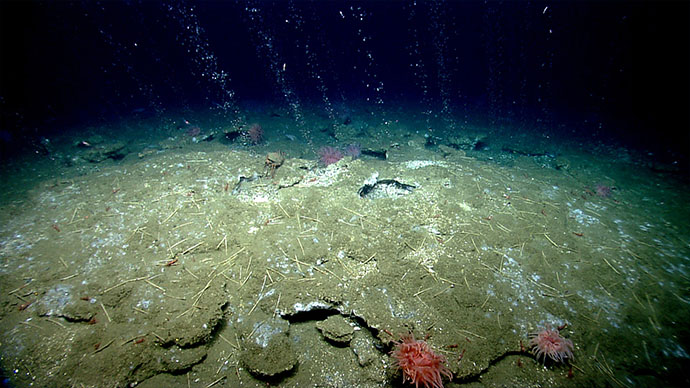 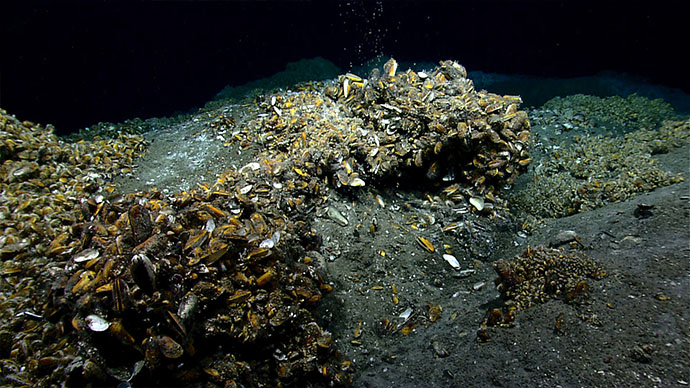 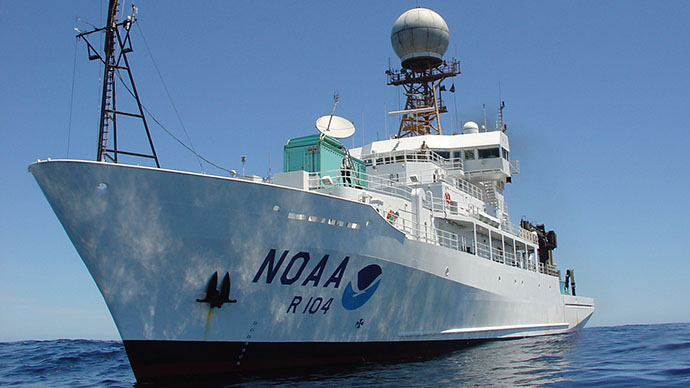