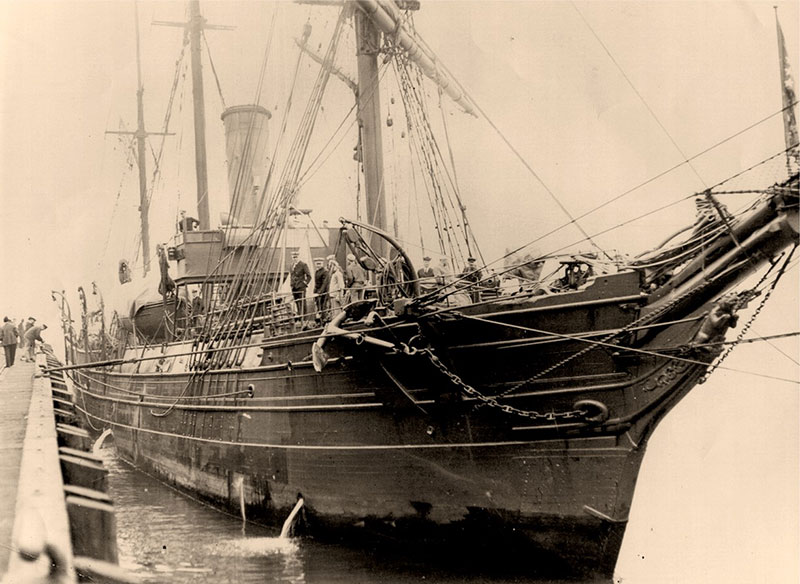 Close up of Bear mooring to a pier showing her hull and sail rig. Image courtesy of the U.S. Coast Guard. Download image (jpg, 569 KB).

Remote sensing operations for the “Search for the U.S. Revenue Cutter Bear” are complete. The U.S. Coast Guard Cutter Bear has resumed its more routine operations, the Mission Team has departed for home, the many cases of survey equipment and the winch have been shipped, and the data collected during the mission are being carefully analyzed.

The mission team accomplished exactly what they set out to do, successfully collecting survey data covering more than 62 square nautical miles of the seabed near where the Bear was lost, totaling 558 linear miles of the ship transiting at 4-5 knots. We concentrated our survey efforts on areas where previous seabed mapping had been undertaken, particularly the 1979 survey conducted by the Massachusetts Institute of Technology and the Coast Guard Academy (see “Search for the Bear, 1979-2019”), as well as additional areas identified through archival research based on “last known positions” and other similar information.

What we found in these areas was largely a whole lot of flat sand, sand waves, and what appeared to be some very interesting rock features of various shapes and sizes. Perhaps, more importantly, we also found two targets of interest that will need to be further investigated to see what is actually there on the bottom.

The side scan sonar technology we deployed is a staple for many maritime archaeologists searching for shipwrecks. It provides some indication of what the seabed looks like as the data being collected are scrolling down the computer display (euphemistically called the “waterfall” as the data are displayed as a cascade from the top to the bottom of the screen) and are captured for future analysis. While side scan sonar can provide reasonably detailed images of what is encountered on the bottom and provide geo-referenced location, it is generally insufficient to offer the high-resolution images needed to definitively identify particular wrecks. There was no expectation that this mission would achieve more than this, but it certainly could have been far less productive.

The goal of this mission was to systematically survey the seabed in this identified area, to see what might be there in the places where the wreck of the Bear was considered most likely, based on the background research conducted. Along the way, we encountered the effects of Hurricane Humberto, Hurricane Jerry, and some opposing high pressure systems that made shipboard living conditions challenging, causing the ship to retreat to calmer waters until the worst of the effects subsided, delaying the survey by a couple of days. We also encountered the inevitable challenges of using technologically sophisticated survey equipment in the real world, only overcome by the highly skilled and knowledgeable mission team members, Joe Hoyt and John Bright, who astounded everyone with their tenacious “never give up” repair work needed to keep the mission moving forward. The officers and crew of the U.S. Coast Guard Cutter Bear rose to the occasion and performed admirably in making the Bear operate as an effective “research vessel,” certainly one of the best research platforms I have had the occasion to use.

We could not have been more pleased with the outcome of the mission in more than meeting the intended goal. Considering that we found two potential sites that warrant follow-up investigation, we are quite confident in describing this mission as a “success.”

Now, the next phase of the “Search for the Revenue Cutter Bear” has begun. Armed with the information collected in our survey, we have already begun planning for the next mission, hopefully in the not-too-distant future, when we will return to the targets identified with different exploration tools, such as remotely operated vehicles, which provide high-resolution video cameras to image what is there, to take a closer look to see if what we found is the final resting place of the Bear or some other historic shipwreck with perhaps a similar compelling story to tell. Whatever the outcome of our future investigations, we will remain undaunted in our pursuit of the Bear, as a ship of such meritorious service and unparalleled history deserves no less.