A sculpin rests on a large red tree coral. During this expedition, a number of fish were found collocated with large coral colonies. Image courtesy of the Deepwater Exploration of Glacier Bay National Park expedition and UCONN-NURTEC. Download larger version (jpg, 7.4 MB).

My perspective has been terrestrial—until now. As a staff member for Glacier Bay National Park, I am on this expedition to observe and apply scientists’ findings to future park management. Several days into the trip, I’ve realized what a shallow thinker I have been—viewing oceans only from the shoreline while walking a beach or from a boat deck. The past few days have opened up a new and vast marine world to me, all below the waterline.

Our National Park Service unit was established in 1925 and includes a federally protected marine area of nearly 600,000 acres. We are tasked with preserving our park’s marine ecosystems “unimpaired for the enjoyment of future generations,” and yet have limited capacity to understand what is really happening from the waterline down to the seafloor. This expedition will change that by providing our first deepwater data. Not only will this give us a baseline to monitor ecosystem changes over time, but also provide a point of comparison for less protected marine areas.

ROV Kraken2 just prior to descent. The Kraken2 was used to give scientists access to the deepest parts of Glacier Bay National Park; without it, we wouldn’t have been able to see the abundance of large corals and other associated fauna that reside in the deep waters. Image courtesy of Kevin Joy, the Deepwater Exploration of Glacier Bay National Park expedition. Download larger version (jpg, 1.6 MB).

Gathering this data is very work intensive for all 25 of us aboard the research vessel. Scuba diving operations run during the day, and the remotely operated vehicle (ROV) operations run all night. My shift staggers from 2 pm to 2 am, so I can observe both. This is my first oceanographic “cruise” and I have to say I am very impressed by the entire crew’s professionalism and ability to collaborate—even in the face of limited sleep, equipment challenges, our remote setting, and constantly changing weather and tide conditions.

During the day, scuba divers opened my eyes to the top layers of Glacier Bay’s water column (down to 100 feet), with undulating seaweed, colorful sea stars of all shapes and sizes, shy octopi, and agile sea lions who seemed very curious about the dive operations. In these relatively shallow waters, the scientists also found deepwater coral (Primnoa pacifica), confirming what surprised everyone a few years ago—in places where silt from melting glaciers blocks sunlight, Primnoa pacifica can establish colonies, hundreds of feet above where it typically lives!

During the night, the ROV brought me the first-ever views of our entire park water column—from sea level down to 1,000 feet in some deeper fjords. Perhaps not surprisingly, footage of our deepest waters is dominated by a pulsing world of tiny, drifting plankton (any micro-sized organism in the ocean, including newly hatched fish and sea creatures, bacteria, fungi, etc.). Plankton in Glacier Bay attracts and supports many other forms of marine life higher up on the food chain, including whales, porpoises, seals, sea lions, and sea birds that can be viewed from the water’s surface. Underwater plankton, it turns out, looks like an Alaskan snowstorm—ranging from a scattering of white specks drifting down gently, to a white blizzard blowing sideways, depending on the tide, currents, and whether the ROV site is in a protected fjord or near the Pacific coast’s vast open ocean.

In some areas, we saw large coral colonies so dense you couldn't see the rock wall behind them, and in other areas with younger colonies, we were able to see what resides on the walls, but doesn't grow as large as the red tree corals. Here, you can see sponges, stoloniferious octocorals, hydroids, and bright anemones. There are likely a number of other organisms if you looked closely enough! Image courtesy of the Deepwater Exploration of Glacier Bay National Park expedition and UCONN-NURTEC. Download larger version (jpg, 4.8 MB).

Besides almost constant plankton, the ROV footage also documented very diverse underwater landscapes, from gooey, silty mud floors, to steep piles of rock and rubble left by retreating glaciers, to towering rock cliffs and overhangs (a favorite location for Primnoa pacifica it turns out). Looking for coral on these uneven vertical walls can make for high adrenaline ROV driving conditions (or flying conditions, as the ROV pilots call it), especially when mud and plankton engulfs the ROV cameras and tidal currents try to push the vessel and ROV into the rocks.

Sporadically the ROV came across other life forms: big glowing jellyfish and ctenophores; scampering shrimp; crabs; and fish of all sizes, ranging from tiny shiny capelin to colorful rockfish, sleek cod, and unbelievably big halibut. As a “groundfish,” halibut typically blend into the mud on the sea floor, although a few times one would loom up suddenly as a black shadow and fly across the screen—too large for the ROV camera to fully capture. Watching this as real-time footage on the big screen in the middle of the night made me recall scenes from late night TV, with squid attacking submarines—and then reflect how fear of the unknown tends to shape the human imagination. Now that I’ve seen to the depths of the ocean, I have to say it is both way more boring, and way more fascinating, than Hollywood would lead us to believe.

Even the areas with young red tree coral colonies, there was an abundance of life. Image courtesy of the Deepwater Exploration of Glacier Bay National Park expedition and UCONN-NURTEC. Download larger version (jpg, 5.1 MB).

Several deep-water areas discovered had high densities of red tree corals. The water was so filled with plankton and dissolved organic material, both of which serve as food for the corals, that it was often hard to get a clear image with multiple large colonies. The two red dots are lasers spaced 10 centimeters apart for scale. Image courtesy of the Deepwater Exploration of Glacier Bay National Park expedition and UCONN-NURTEC. Download larger version (jpg, 7.7 MB).

The most exciting highlights of ROV footage came when the team successfully found diverse Primnoa pacifica habitats. Before sending the ROV down, geologists and coral scientists poured over maps to make an educated guess about where coral might live. Of the coral colonies they discovered, some Primnoa pacifica sites had sub-optimal conditions with tiny pioneer starts, and/or very pale, spindly looking coral colonies. Other sites provided prime habitat with strong currents and good food supply, so Primnoa pacifica colonies were bursting with life. In these locations, Primnoa pacifica colonies formed large fans, reaching out and curling, shaped like a catchers’ mitt to capture the micro-life streaming by in the current. These colonies were so lush, brightly colored, and abundant it was hard to see where one colony ended and another began.

As the expedition ends for me, I think back over all the scuba and ROV images and footage and realize I’m not all that surprised at the amazing seascapes we found. Although it was all new to me, Glacier Bay’s underwater world is just like the rest of the park I’ve seen, from our tidal beaches up to its majestic peaks and glaciers—a dynamic continuum of life in a vast, intact ecosystem.

An octopus hides in a small group of barnacles and sponges. Image courtesy of the Deepwater Exploration of Glacier Bay National Park expedition and UCONN-NURTEC. Download larger version (jpg, 4 MB).

So the next time I’m on the beach or a boat deck, I may still marvel at what is visible in our shallow waters: glassy reflections of the scenery, whale spouts, and diving seabirds. But I’ll also recall the diverse habitats and animals I saw in our water column and seafloor. And I will be grateful that this park is a protected place where deep sea coral colonies—which can grow over hundreds of years—can live on as a sample of wild America for future generations. 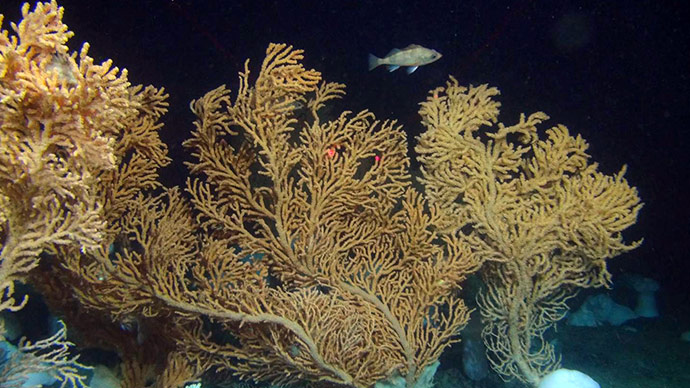 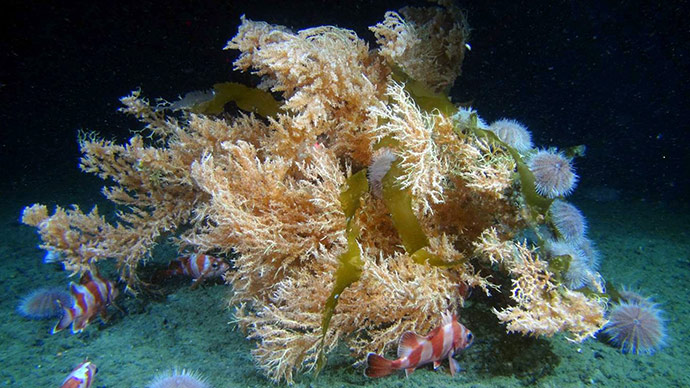 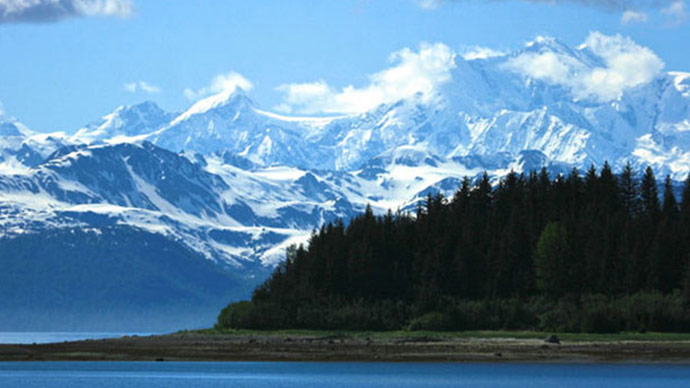 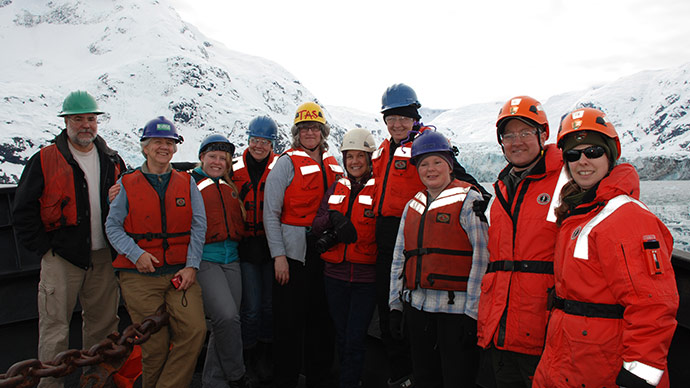