Bioluminescence and Vision on the Deep Seafloor 2015

A key purpose of the NOAA Office of Ocean Exploration and Research (OER) is to investigate the more than 95 percent of Earth’s underwater world that, until now, has remained virtually unknown and unseen. Such exploration may reveal clues to the origin of life on Earth, cures for human diseases, answers on how to achieve sustainable use of resources, links to our maritime history, and information to protect endangered species.

The Bioluminescence and Vision on the Deep Seafloor 2015 expedition offers a unique opportunity for explorers of all ages to investigate the amazing world of deep-sea bioluminescence.

The primary regions of study are several sites visited briefly by NOAA Ship Okeanos Explorer, two sites with a large diversity and abundance of animals that have never been looked at for bioluminescence, and one site with a known abundance of bacterial mats.

This expedition will include three primary focuses of study: exploring the region to search for new habitats, species, and communities of organisms; exploring specific examples of interactions between organisms in pelagic (water column) and benthic (seafloor) environments involving bioluminescence; and studying the visual capabilities of deep-sea crabs, shrimp, and isopods in relation to using bioluminescence to identify food targets

Relatively rare on land, bioluminescence is an intriguing, yet common ocean phenomenon. To date, scientists have determined that 14 marine animal phyla include bioluminescent species (Herring 1987, Haddock et al. 2010) and more new species are expected to be found in future expeditions. Bioluminescence has been well studied within the water column, but most information on bioluminescence in the deep sea is scarce, mainly due to the difficulty in retrieving live organisms for study on the surface.

Recent advances in technology, however, have led to the development of collection containers that allow for retrieved organisms to be protected from temperature and light changes. Pressure changes are not a problem for animals that live shallower than 2,000 meters, but temperature changes (7°C at their normal depths; as high as 28°C in surface waters) can be lethal. 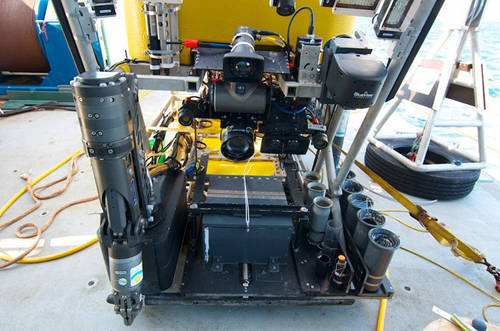 The exploration team will examine, collect and study species in the region using the remotely operated vehicle (ROV) Global Explorer, which has excellent imaging and collection capabilities. The ROV’s collection container, called a BioBOX, is a temperature insulated container that can be closed at depth after collections are finished, ensuring that collected animals will be maintained in cold water on the trip to the surface.

In addition to temperature concerns, it is imperative that organisms being studied for visual capabilities not be exposed to light. Exposure to surface light levels will permanently blind these organisms, as can exposure to the white lights on the ROV. In order to prevent light damage, lights on the ROV will be fitted with red filters, as deep-sea species cannot see red light. Samples for visual physiology studies will be collected under dim red light and placed into the special black BioBOX to block all external light.

Two specific species of crabs have been found to associate with particular coral species in the deep waters of the Gulf of Mexico. Past observations indicated that the crabs sit stationary on these corals for long periods of time and periodically use their claws to pick particles off their hosts and bring them to their mouths.

The spectral sensitivities of all seven species of deep-sea benthic crustaceans studied to date peak in the blue wavelengths, but those of the two crab species closely associated with corals have a second sensitivity maximum at violet/ultraviolet wavelengths, which may be an adaptation associated with bioluminescence (Frank et al. 2012). In the tall, sessile, tree-like corals that produce it, bioluminescence is green-shifted (Johnsen et al. 2012) compared to most of the pelagic bioluminescence that has been measured to date (Herring 1983, Widder et al. 1983; Haddock and Case 1999; Widder 2010).

This was the first time that the bioluminescence/visual ecology of this crab/coral deep-sea symbiosis had been studied. Scientists on this expedition intend to further explore this hypothesis and characterize the relationship between these species.

Large-clawed shrimp on Iridogorgia-type coral at 2,044 meters depth, south of DeSoto Canyon. Such shrimp may be specific to certain species of coral with these spiraling branches. Image courtesy of NOAA Office of Ocean Exploration and Research, Okeanos Explorer Gulf of Mexico Expedition 2012. Download image (jpg, 49 KB).

Another novel use of bioluminescence is based on the unverified idea that accumulations of marine snow and detritus on the ocean floor might contain bioluminescent bacteria (Lampitt et al. 2001) colonized in the carcasses and fecal pellets of various marine organisms. This has suggested to scientists that seafloor background glow may be used as a cue by deep-sea scavengers.

Deep-sea isopods are thought to be scavengers and their eyes have a long integration time, analogous to a camera with a very slow shutter speed. This indicates that these animals likely cannot track moving prey as they would be blurred, but likely can make out dimly glowing detritus, a food target.

The science team on this expedition intends to study the visual physiology of specific deep-sea isopods as well as look for the presence of glowing bacterial mats in their habitat, to further explore this hypothesis.

In addition to the ROV Global Explorer, this team will be using a tool called the Medusa lander. This lander is an upgraded version of the Eye-in-the-Sea (EITS) system  that has historically provided some of the most intriguing deep-sea footage available. This tool observes animal life in the dark depths with as little disturbance as possible, using far-red light (light at the extreme red end of the visible spectrum) illumination invisible to most deep-sea inhabitants.

The Medusa lander will be deployed over the side of the research vessel and is designed to return to the surface using a time-release system. This will allow for imaging of the sediment of the deep seafloor in its natural light and to unobtrusively observe the interactions of the crabs and corals of interest in their natural habitat.

This expedition is sure to shed exciting new light on the science behind bioluminescence in the deep sea. Look for exceptional video and imagery to be added to the website as the expedition progresses!