The sunken ships in the Thunder Bay National Marine Sanctuary lie on the bottom of Lake Huron, which ranges from 61 to 91 meters (200 to 300 feet) deep. You cannot use cameras or radar from a surface ship to search for these lost vessels, because light waves and radio waves cannot penetrate that deep under water. Sonars are often used, because sound waves can penetrate the water to “see” farther than cameras or radars. 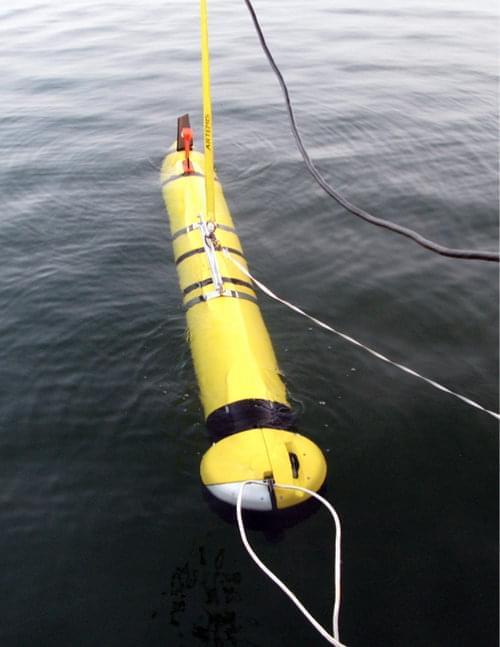 The ATLAS free-swimming underwater vehicle measures 0.3 meters (1 foot) in diameter and 1 m (10 ft) in length. The ATLAS sonar, which is mounted on the nose, views a large and wide area in front of the vehicle. At this moment, the AUV is in a quiet lake and in its pre-release position, where the vehicle and software are in their final check-out. In a moment, the lines will be released and the vehicle will be sent on its way to search the lake floor. Image courtesy of Thunder Bay 2010 Expedition, NOAA-OER. Download larger version (jpg, 39 KB).

There are three common ways to deploy a sonar from a ship: attach it to the hull, tow it on a long cable, or install it on an independent underwater vehicle. Attaching it to the hull is simplest, but the lake bottom can be a long way away and it is often difficult to get a good sonar picture at that distance. (Just like it is difficult to take a recognizable photograph of a friend from across a football field.) Towing a cable can also be difficult, because the cables must be strong, handling them on a ship is challenging, and it takes a lot of energy to tow almost anything on a cable through the water.

This side-view of the ATLAS autonomous underwater vehicle (AUV) shows the sonar mounted on the nose, the orange GPS/WiFi antenna and strobe light mounted on top, and the fins with propeller at the stern. The underwater modem uses the small black transducer underneath the AUV to transmit and receive acoustic messages between the AUV and support ship. Image courtesy of Thunder Bay 2010 Expedition, NOAA-OER. Download larger version (jpg, 100 KB).

Sonar on an AUV

For this project, we mounted a sonar on an independent underwater vehicle, which is launched from a ship. The vehicle is called an autonomous underwater vehicle or AUV, because once it is launched on a survey mission, it is self-reliant and follows the mission plan without instructions from us on the ship.

This AUV was designed and built by the Woods Hole Oceanographic Institute (WHOI) and is called a REMUS 600. It is roughly 0.3 m (1 ft) in diameter and 3 m (10 ft) long. It is propelled by an electric motor and will run for 10 to 20 hours before it needs to recharge its batteries. The AUV can dive to a depth of 600 m (1,969 ft) before the hull fails and is crushed. The sonar on this AUV is called ATLAS (autonomous topographic large-area survey) sonar and was developed by the Applied Research Laboratories at the University of Texas at Austin. 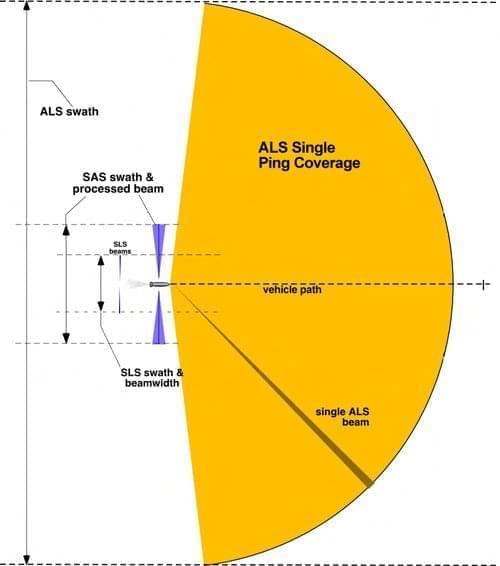 ALS single-ping field of view and swath width: The ATLAS sonar is designed with a long detection and subsequently a wide swath width. As the vehicle traverses an area, objects which pass through the sensor’s field of view are seen dozens to hundreds of times. In contrast, side-looking sonars (SLS) tend to have narrow swaths and view an object from only a single aspect angle. Image courtesy of Thunder Bay 2010 Expedition, NOAA-OER. Download larger version (jpg, 64 KB).

The ATLAS sonar is mounted on the nose of the AUV to view a semicircular region 400 m (1,312 ft) in front of the AUV (see figure). This sonar has a much wider swath-width — 400 m (1,312 ft) — to the left and right, and higher image resolution than most sensors of this small size. Like a dolphin or bat, the sonar emits a short click-like sound (or ping), then "listens" to hear the echoes that come back from the lake-bottom, rocks, fish, and/or (hopefully) shipwrecks. Unlike an echo-ranging mammal that listens with two ears to determine the distance and direction of a few objects, the ATLAS sonar has hundreds of hydrophones (underwater microphones) to calculate the ranges and directions to thousands of objects.

This sonar pings every few seconds as the AUV travels at 1.5 m (5 ft) per second — 3 knots or 3.5 mph) — so the sonar "sees" the same objects from different viewpoints over dozens to hundreds of pings. It collects all these viewpoints to build maps of the features and objects on the lake bottom. The characteristics of the sonar were specifically designed to autonomously survey large areas for obstacles and objects on the ocean floor or lake bottoms. 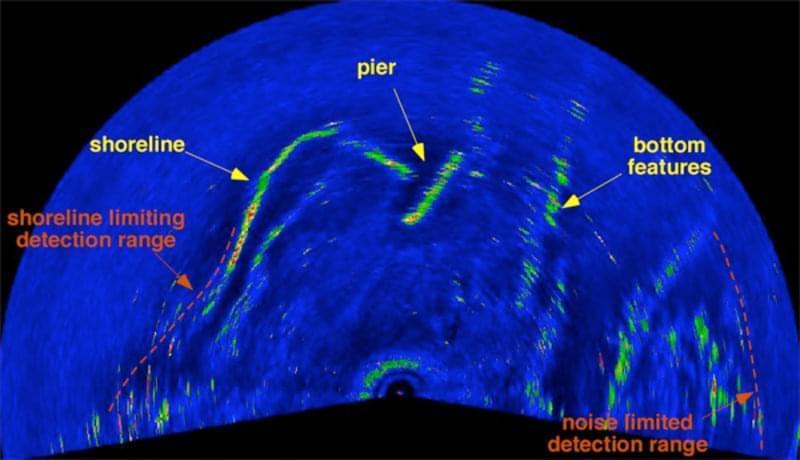 Typically, the AUV surveys an area by running multiple tracks (like one might mow a lawn). The large swath-width allows for a wide track spacing, which results in a higher area of coverage. For Thunder Bay, we hope to survey over 100 square nautical miles of the sanctuary. During this survey, the sonar will record the data from every ping; and after the AUV is recovered, we will upload the data and process it to generate maps of the surveyed area. The maps should show interesting objects, such as underwater ridges, trenches, rock fields, sand waves, and hopefully shipwrecks and their debris fields.

By the end of this project, we hope to have discovered new, previously unknown, natural bottom features and archeological manmade objects in the Thunder Bay National Marine Sanctuary. We also hope to show that this sonar and AUV is a very useful tool that can be used to survey these types of areas; and we hope to collect new data that can be used to improve the capabilities of the sonar to detect and image many different types of underwater objects.