Thunder Bay 2010 will bring cutting-edge shipwreck finding technology to Lake Huron’s “Shipwreck Alley.” Long known for its rough weather, treacherous shoals, and tight shipping lanes, the stretch of Lake Huron just off the northeastern Michigan coast has claimed hundreds of ships. A 448-square-mile area with 50 known historic shipwrecks is protected by the Thunder Bay National Marine Sanctuary (Thunder Bay NMS), but there are more shipwrecks to be discovered beyond the sanctuary boundaries. From August 16 to 27, 2010, a team from the Thunder Bay NMS and the Applied Research Laboratories  at The University of Texas at- Austin  (ARL:UT) will set out to discover new shipwrecks sites using cutting-edge sonar mounted on a free-swimming autonomous underwater vehicle (AUV). The team will also search for prehistoric archeological sites along a submerged ridge that was exposed, and potentially occupied by humans, nearly 10,000 years ago. 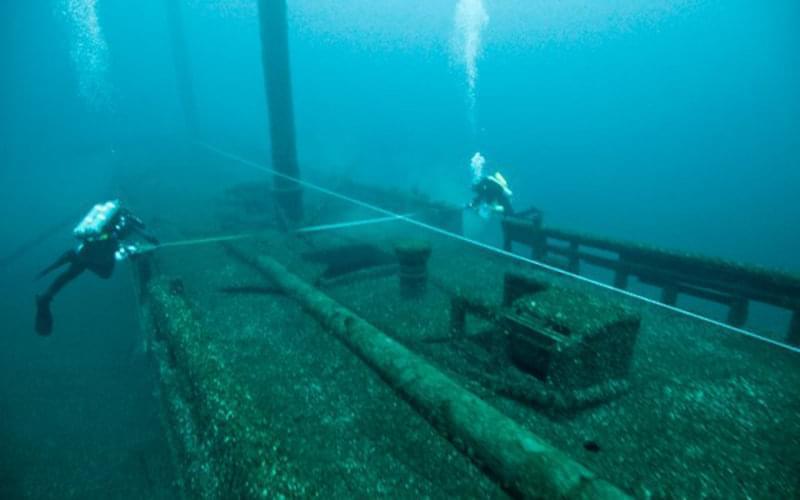 Archaeologists from the Thunder Bay National Marine Sanctuary — with support from the Cooperative Institute for Ocean Exploration, Research and Technology  — document the wreck of the schooner Defiance, which rests in 56 meters (185 feet) of water just north of the sanctuary. In order to capture the wreck's current state of preservation, the team produced hand-drawn maps and photomosaics. Image courtesy of Thunder Bay 2010 Expedition, NOAA-OER. Download image (jpg, 29 KB).

Over the course of 10 days, the team will daily deploy a REMUS 600 autonomous underwater vehicle (AUV) equipped with ATLAS forward-looking sonar developed by ARL:UT. Searching in a 150-square-mile area south of the current sanctuary boundaries, the team will first use ATLAS to image a couple known shipwreck sites. This will help the team calibrate the sonar for working in 150- to 300-foot depths, and also provide the sanctuary with some baseline data on the sites. The sanctuary has little data on shipwrecks in this area, so even this “tune-up” leg of the project will prove to be exciting.

Notably, there is a sanctuary expansion bill in the U.S. Senate awaiting a floor vote. The bill would increase the sanctuary from 448-square-miles to 4,085-square-miles. Obtaining some sonar imagery of wrecks in this area is an important first step in getting a handle on how the sanctuary might more fully document and interpret them.

Established in 2000, the Thunder Bay National Marine Sanctuary protects one of the nation’s most historically significant collections of shipwrecks. Located in the northeast corner of Michigan’s lower-peninsula, the 448-square-mile sanctuary contains 50 known historic shipwrecks. Archival research indicates that over 100 sites await discovery beyond the sanctuary’s current boundaries. This fact, coupled with strong public support and the occurrence of dozens of known shipwrecks, provides the rationale for potentially expanding the sanctuary from 448-square-miles to 4,082-square-miles (a nine-fold increase). Boundary expansion is well underway, with five public scoping sessions completed and strong public support for the added resource protection and heritage tourism possibilities that an increased sanctuary could encourage.

ATLAS’ chief strength is the ability to cover a large survey area. The vehicle can run for 6 to 8 hours at a speed of 3 or 4 knots, with little attention from the surface crew. The imagery provided by ATLAS will allow archeologists to quickly determine if a “target” is a shipwreck or not, and may even help us determine the type of vessel (sail or steam). However, in the field of sonar technology, there is always a tradeoff between swath width (the ability to acoustically “see” a portion of the bottom) and the resolution of the sonar images. Although ATLAS sonar strikes an amazing balance between the two, the team will also have on board the research vessel Storm a Klein 3000 side scan sonar . Operating at a higher frequency (and therefore producing higher resolution images), the Klein system will give the archeologists even more details from which to discern details of “targets” found by ATLAS. However, the Klein has a swath width only about a tenth of the range as ATLAS. The team will use the Klein system to ground truth (examine with sensing instruments) targets of interest.

This same methodology will be used to map a portion of the Alpena-Amberley Ridge, where University of Michigan (U of M) researchers are looking for prehistoric archeological sites. Between 7,500 and 9,500 years ago humans may have been hunting caribou on the ridge, using long rock “drive lanes” to funnel caribou toward a particular area. U of M researchers hope to map the ridge, and then model it in 3D, in an effort to predict the mostly geographical advantageous areas that hunters might have used. ATLAS will map large portions of the ridge, with particularly interesting portions being developed in more detail with higher resolution side scan sonar. Learn more .

The team will process data daily, with a shore-based team processing the previous day’s data. This will help confirm that the data is reliable, and allow us to make any technological or operational adjustments, or re-cover certain areas. A major component of the project is ATLAS’ ability to produce bathymetry data. The shore-based team will be continuously building maps, and providing the survey team with a detailed look at the lake bottom in the survey area. Although there are NOAA-produced navigational charts for all of the Great Lakes, many areas are lacking in detailed bathymetry maps. ATLAS should help us get a better appreciation for Lake Huron’s bathymetry, and even help scientists detect geological features such as submerged sinkholes. 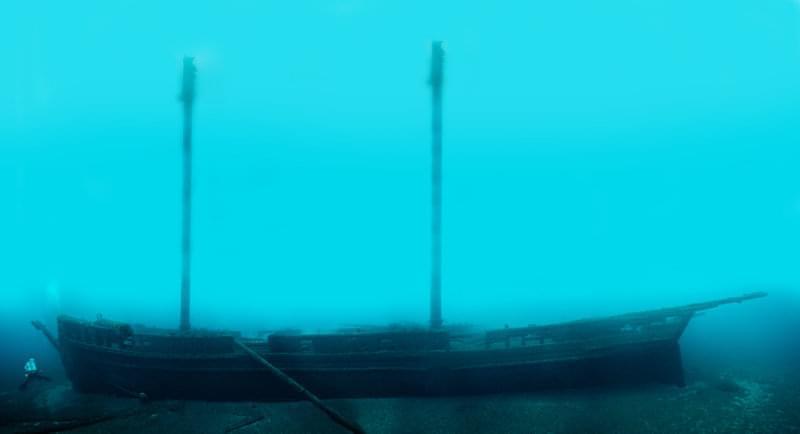 A photomosaic of the schooner Defiance, sunk in 1854. Resting in almost 61 meters (200 feet) of water, the wreck is challenging to document. Sanctuary archaeologists “stitched” together hundreds of individual images to produce this photomosaic and capture the site’s state of preservation in 2010. Image courtesy of Thunder Bay 2010 Expedition, NOAA-OER. Download larger version (jpg, 194 KB).

The Thunder Bay 2010 project has two overarching goals. First, the team wants to put ATLAS to the test in a new and deeper environment. These will be the deepest depths — 46 to 91 m (150 to 300 ft) — that ATLAS has worked in. Consequently, a big part of the mission will be figuring out how to get the most out of ATLAS; and this means lots of fine tuning both technically and operationally. Archaeologically, the team is searching for new historic shipwreck and prehistoric archeological sites in an attempt to better understand the quantity, disposition, and individual characteristics of maritime heritage sites beyond the sanctuary’s present boundaries. From here, the range of research, recreational, and interpretive possibilities offered by the discovery of new sites expands widely. Finding new sites, placing them on a solid path of carefully thought out research, management, recreational use, and public interpretation, is the first step.