This past weekend, the cruise visited a brand new, unexplored area called Green Canyon 246 (GC246). GC246 was chosen because of its wonderfully varied seafloor bathymetry, as well as its multiple bright and dim seismic amplitude anomalies. Bright spots (reds and yellows on the amplitude map) represent plausible hard grounds such as coral communities, calcium carbonate pavements, thick mussel beds, or exceptionally dense mud. Dim spots (whites and grays on the amplitude map) represent plausible oil and/or gas seep locations, but can also indicate areas with exceptionally steep terrain due to the seismic signal not reflecting off the seafloor and back to the ocean’s surface effectively. 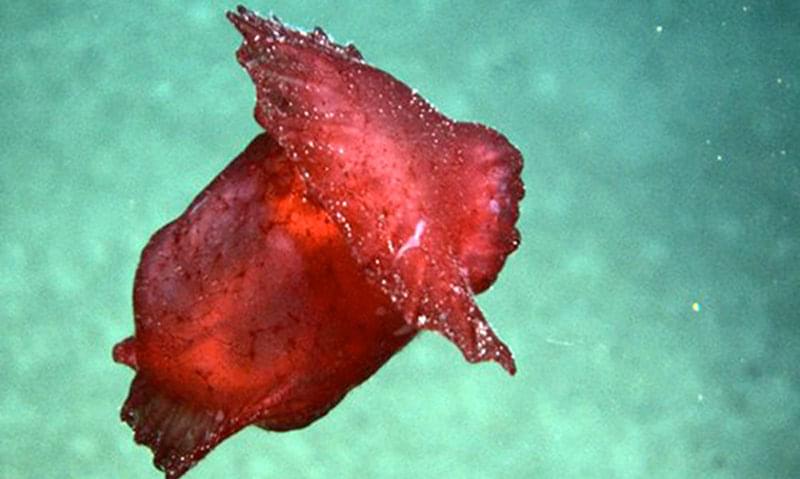 The Spanish Dancer is a type of sea cucumber (Benthodytes) that is mesmerizing when it swims. We saw quite a few of them on the dive (and collected two). Image courtesy of Lophelia II 2010 Expedition, NOAA-OER/BOEMRE. Download image (jpg, 77 KB).

The Department of the Interior’s Bureau of Ocean Energy Management, Regulation, & Enforcement (BOEMRE) – formerly the Minerals Management Service – has collaborated with NOAA to find, map, and sample hard ground coral communities in the Gulf of Mexico and Atlantic continental shelf. These sensitive biological areas need protection from the extensive human activities in these regions, such as drilling for fossil fuels and setting structural foundations for offshore renewable energy generation facilities like wind turbines and tidal capture devices. Because of their mission to manage these resources, BOEMRE maintains a large database of geophysical, geochemical, geological, and biological data acquired by the oil industry in their quest for hydrocarbons. Scientists at BOEMRE use the industry’s 3D geophysical data to attempt to locate and predict where these sensitive coral and chemosynthetic communities live and thrive. 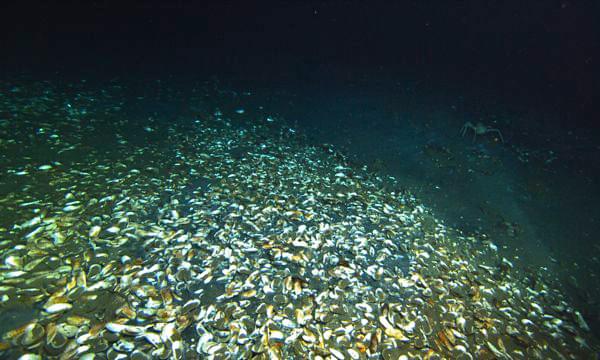 Everything May Not Be As It Seems

GC246 looked promising on bathymetry and amplitude maps, but was overall a relatively featureless, muddy seascape. But don’t discount the area just yet; GC246 turned out to have some solid biologic and geologic diamonds in the rough. Numerous Spanish Dancers (Benthodites), beautiful red squid-like creatures, were seen and collected, as well as two large crabs and a Dumbo Octopus. Our search for corals took us to the highest point in the area, but the only inhabitants were burrowing fish and scuttling shrimp, with the occasional irate crab. However, as we reached our 7th and final data point, we discovered last is certainly not least.

At this location we encountered numerous mussels, huddled together in pods of 6 or more, with hundreds of snails abounding. There were also tiny geologic vent cones, likely sites of highly salty water, or brine, breaking through from the subsurface. We sampled the mussels and took some cores of the top layer of sediment before moving to the southerly portion of the area, where we found quite a surprise. 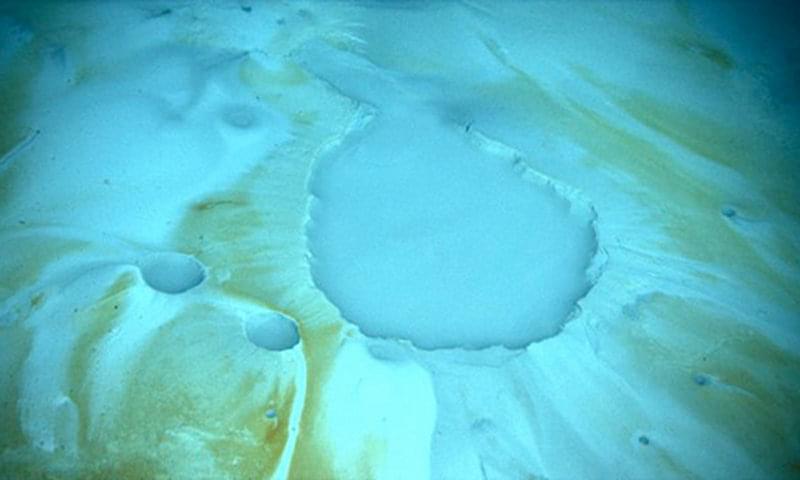 These craters mark the formation of brine pools, from which salt has seeped through the seafloor and encrusted the nearby substrate. Image courtesy of Lophelia II 2010 Expedition, NOAA-OER/BOEMRE. Download image (jpg, 60 KB). 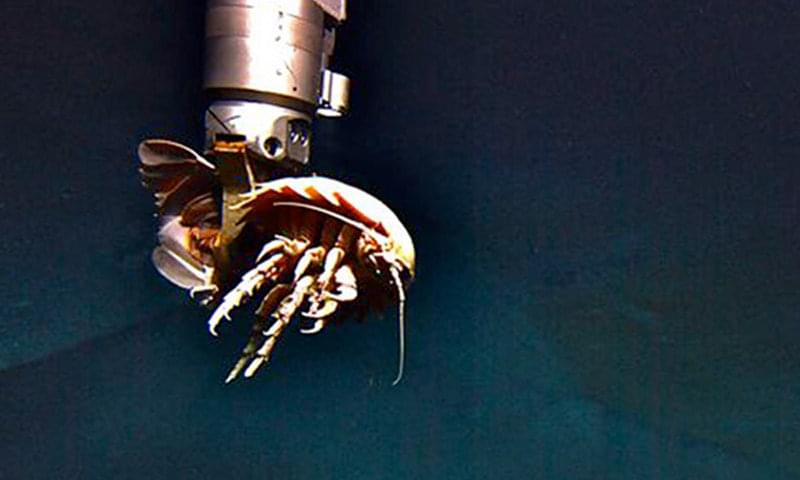 The Jason ROV came upon a large brine seep area, made up of numerous pools and seeping cones. It resembled parts of Yellowstone Park, just underwater. We decided to follow a prominent brine flow uphill to its source, whereupon we discovered the source to be a massive brine lake, one of only about 20 in the Gulf of Mexico, approximately six to ten inches deep, rimmed with mussel shells, and with active brine seeps in its center. Also in the center of the pool was a deceased isopod, which we collected and sat on Jason’s tray. We sat down in the pool and brine waves propagated outward, lapping its shoreline.

After some great filming, we proceeded to a new data point about 1 kilometer south of the pool, a skyscraper sized mud volcano. On the seismic amplitude map, the top of the volcano was very white, so we were hoping it would be actively flowing. The volcano was almost completely barren of life, save the occasional fish or shrimp. As we moved from the steep slope to the crest of the volcano, fresh mudflows could be seen originating from the cone, but were inactive on this particular visit. The actual mouth of the volcano was no more than 2 to 3 feet in diameter, but had obviously been active for hundreds of thousands of years in order to build the many storied conical feature. Albeit very geologically interesting, we had once again struck out on finding corals at GC 246, so it was on to another new point further south. This 9th location finally proved a success. We found solitary soft corals (Callagorgias) finely dispersed along the steep hillside, brittle stars characteristically clinging to them.

From a BOEMRE perspective, the results of this dive will allow us to more finely tune our methods for locating hard ground communities. The areas we had characterized on the seismic amplitude map as probable hard substrate turned out to be areas of extremely dense layers of mud, and the brine vent site, characterized by a small dim region on the map, was confirmed. Areas where we have confirmed coral activity will be mapped, and no drilling will be permitted to within 2,000 feet around the specific area. This will help to ensure as little human interference with these populations as possible, so as to secure their safety into the future.