Gas-powered Circle of Life – Succession in a Deep-sea Ecosystem

One objective of this cruise is to learn why we find deepwater corals where we do. An important factor is that these corals require hard bottom to settle and grow. Such hard substrate is rare on the muddy seafloor of the Gulf of Mexico, except in the occasional area with exposed carbonate rock. These authigenic (“formed in place”) carbonate rocks result from ecological succession at a site, involving many organisms other than coral, over a period of hundreds of years. Without it, the deepwater coral communities we get to explore on this cruise might not have appeared at all. This process begins with the formation of cold seeps. 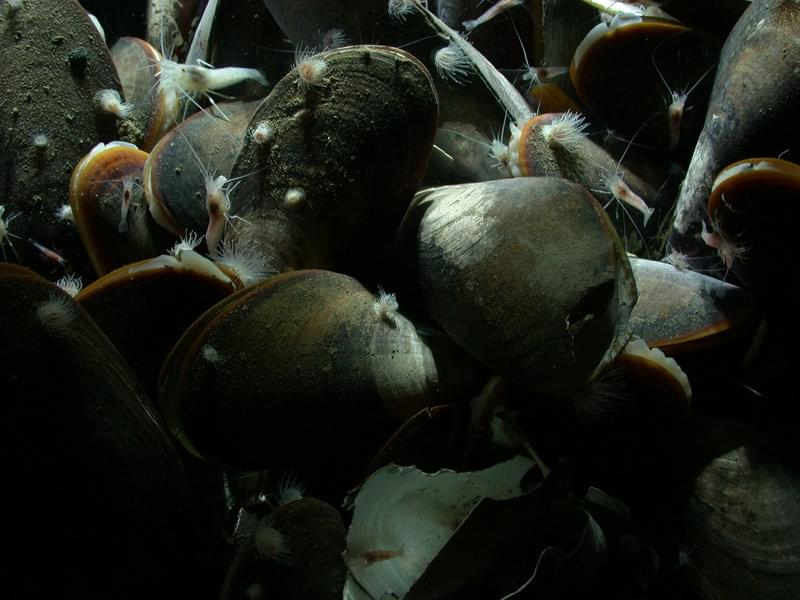 Cold seeps occur over fissures on the seafloor caused by tectonic activity. Oil and methane "seep" out of those fissures, get diffused by sediment, and emerge over an area several hundred meters wide.

Methane is the main component of what we commonly refer to as natural gas. But in addition to being an important energy source for humans, methane also forms the basis of a cold seep ecosystem. 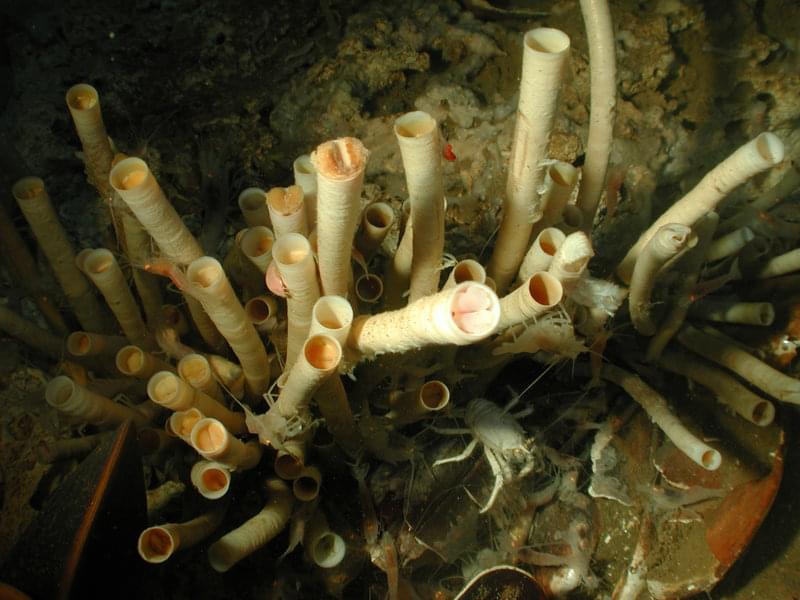 Close up of a tubeworm “bush”, which mines for sulfide in the carbonate substrate with their roots. The sulfide is metabolized by bacteria living in the tubeworms, and the energy produced sustains both organisms. It is a classic symbiotic relationship. Image courtesy of Lophelia II 2010 Expedition, NOAA-OER/BOEMRE. Download larger version (jpg, 1.8 MB).

The first type of organism to take advantage of this deep-sea energy source is bacteria. Aggregating into mats at cold seeps, these microbes metabolize methane and hydrogen sulfide(another gas that emerges from seeps) for energy. This process of obtaining energy from chemicals is known as chemosynthesis.

During this initial stage, when methane is relatively abundant, dense mussel beds also form near the cold seep. Mostly composed of species in the genus Bathymodiolus, these mussels do not directly consume food. Instead, they are nourished by symbiotic bacteria that also produce energy from methane, similar to their relatives that form mats.

This microbial activity produces calcium carbonate, which is deposited on the seafloor and forms a layer of rock. During a period lasting up to several decades, these rock formations attract vestimentiferan tubeworms, which settle and grow along with the mussels. Like the mussels, tubeworms rely on chemosynthetic bacteria (in this case, a type that needs hydrogen sulfide instead of methane) for survival. True to any symbiotic relationship, a tubeworm also provides for their bacteria by appropriating hydrogen sulfide from the environment. The sulfide not only comes from the water, but is also mined from the sediment through an extensive root system a tubeworm "bush" establishes in the hard, carbonate substrate. A tubeworm bush can contain hundreds of individual worms, which can grow a meter or more above the sediment.

Cold seeps do not last indefinitely. As the rate of gas seepage slowly decrease, the shorter-lived, methane-hungry mussels (or more precisely, their methane-hungry bacterial symbionts) start to die off. At this stage, tubeworms become the dominant organism in a seep community. As long as there is some sulfide in the sediment, the sulfide-mining tubeworms can persist. Individuals of one tubeworm species Lamellibrachia luymesi have been estimated to live for over 250 years in such conditions.

Finally, as cold seeps become inactive, tubeworms also start to disappear, clearing the way for corals to settle on the now exposed carbonate substrate. The corals do not rely on hydrocarbons seeping out of the seafloor. Studies on Lophelia pertusa, the species this cruise is named after, suggest they derive their nutrition primarily from the ocean surface. Chemosynthesis plays only a very small role, if any, in their settlement and growth.

While deepwater corals do not seem to be chemosynthesis-based organisms, the chemosynthetic organisms that come before them enable the corals' existence. This process of a community composition's orderly shift from one set of species to another is called ecological succession. Such a phenomenon happens not only in the deep sea, but in many biological systems. The re-establishment of a forest after a fire is a classic example. One amazing thing about being an ecologist is learning how processes like succession are at work in seemingly unrelated ecosystems, marine or terrestrial. Ecology is truly a fundamental science, and it's one I intend to study for the foreseeable future.