The Chile coastline stretches along for more than 4,300 kilometers (2,700 miles). Its geology and biology provide an incredible natural laboratory for the study of how life on our earth functions and has evolved. One particular setting, the Chile triple junction, exemplifies this. The area centers on the intersection of three tectonic plates, two of which are getting pulled apart while both, simultaneously, are being forced under the third plate and the South American continent. During the 24-day INSPIRE cruise, a team of 35 scientists will visit four sites along the Chile margin, starting at this largely unknown — yet completely unique — part of our planet. Through our international, interdisciplinary, and student-led explorations, we hope to reveal the previously undiscovered biodiversity, ecosystem functioning, and distinct geology of the Chile margin (figure 1).

Figure 1. During this 2,400 kilometer (1,500 mile) voyage, we will visit four sites along the Chile margin, starting in the town of Puerto Montt in Southern Chile and ending in Valparaiso. This map is modified from Google Earth. Download image (jpg, 84 KB).

The initial goal of the cruise is to explore the Chile triple junction. This is the only place on earth where an actively spreading mid-ocean ridge is being subducted beneath a continent. Mid-ocean ridges support hydrothermal vents, which are areas where super-heated water, enriched in a range of chemicals that are otherwise quite rare in the oceans, is released from the deep seafloor. When certain of these chemicals (notably hydrogen sulfide and methane, but including — to a lesser extent — hydrogen and iron) react with the oxygen present in deep-ocean water, the energy released is harnessed by microbes that use it to grow.

These microbes serve as the deep-sea equivalent of land plants, functioning as primary producers and providing the base of a complex food chain. The microbes involved in these reactions are divers and can exist both in free-living forms and in symbiotic (prolonged but not necessarily beneficial) relationships with many animals, including tube worms, mussels, clams, and shrimp (figure 2). The chemicals they harness for energy are in a “reduced state” and so hydrothermal vents are a form of “reducing environment,” where chemical energy — harnessed by chemoautotrophic (deriving energy from inorganic chemical compounds) microbes — fuels a community of strange and unique animals.

Hydrothermal systems are not the only type of reducing environment. Sites of methane seepage, derived from massive methane deposits on the Chilean continental shelf, are another key and ubiquitous example of reducing environments. Where methane leaks out of vast gas hydrate reservoirs, a group of animals very similar to hydrothermal vent animals exist. They use the same chemical energy sources, yet to date few species found at seeps are also found at vents. The question is: Why?

Figure 2. Mussels beds, such as this bed of bathymodiolin mussels, are good examples of deep-sea fauna found as at reducing ecosystems. This image was taken at 1,000 meters (3,000 feet) in the waters off Costa Rica, although species within this family are found at seeps and vents around the world. Image courtesy of CRROCKS/NSF. Download image (jpg, 168 KB). 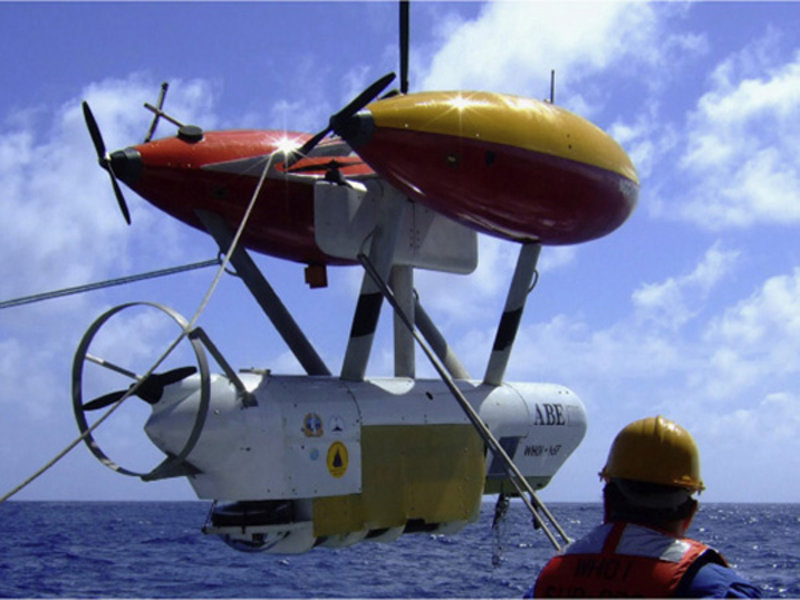 Figure 3. The autonomous benthic explorer (ABE) is a free-swimming underwater robot. In this image, ABE is about to be set loose from the Chinese research ship Da Yang Yi Hao in Spring 2007 to explore the bottom of the SW Indian Ocean. Over the past five years, ABE has been used on multiple expeditions to find new hydrothermal vents in the deep ocean all over the world, from New Zealand to South Africa and from Brazil to Ecuador. Image courtesy of Christopher German. Download image (jpg, 84 KB).

One explanation for this may simply be that vents and seeps from the same area have not been studied in detail. Up to now, researchers were forced to compare two faunas separated by thousands of kilometers. The special setting of the Chilean margin provides a unique opportunity since we will likely find both vents and seeps in close proximity. For the first time, we can answer the question: Do vents and seeps have the same species present when there are no vast distances separating them? The other possible explanation for this discrepancy is that these two habitats could be evolutionarily linked by a transition fauna, that is a hybrid fauna which is closely related to vent fauna and closely related to seep fauna but is distinct from both.

In this scenario, some sort of evolutionary “stepping stone” habitat may link seep and vent communities. Areas in the vicinity of the Chilean triple junction could support this hybrid habitat, as it is possible that warm hydrothermal fluids are being forced through the methane-rich margin creating warm, methane-rich habitats in close proximity to the other reducing habitats. This type of area could be the missing link between the global vent and seep faunas. But first, we need to find the right habitats that will allow us to begin to answer these questions. Thus, exploration is our initial goal on this cruise.

To find these ecosystems we will be searching for plumes or parts of the water column which have the chemical and/or temperature signatures of these reducing habitats. We will conduct targeted surveys using special sensors to find turbidity (cloudiness created by particles in the water) and reduced compounds, such as methane; both of these are indicative of hydrothermal flow, which we can follow back to the area of venting or seeping.

Our main tool for this is an autonomous underwater vehicle (AUV). Our specific AUV is called ABE (autonomous benthic explorer) shown in figure 3. ABE is deployed from the ship and swims in a pattern measuring temperature, conductivity, eH, and mapping above the seafloor. In those places where we detect plume signatures, we will design the next-phase ABE survey to study prospective vent/seeps in detail. ABE will operate closer to the seafloor and photograph what is present. From these photos we can identify large seep fauna (i.e., tube worms, mussels) and decide where to take samples of animal

We will collect animals with both small trawls and a multicorer — a mud sampling device that we have outfitted with a camera system. This camera system, unlike that on ABE, has a live video feed and can transfer imagery to the ship from as deep as 6,000 m (18,000 ft). Through this video feed, we can hover the multicorer over the seafloor until we see exciting features, such as clam beds or bacterial mats (figure 4), at which point we can lower it and take samples. In addition, we will be taking water samples from the plumes above.

This cruise is unique in that it is led by a team of students who will be tackling a diverse suite of questions about this habitat. Based at the Scripps Institution of Oceanography (University of California – San Diego) and the University of California – Santa Barbara, these 10 students represent a broad range of scientific disciplines. They will be studying all aspects of these unique habitats and this cruise forms the backbone of many of their PhD dissertations. The University of California students will be working with undergraduates and graduate students from Chilean institutions, and with an international team of experts from around the globe, including pioneers of seep and vent research from Chile and the United States. The students and established scientists, through exploring this region, will begin to answer:

We will begin by exploring the Chile triple junction and potential hybrid habitats, spending eight days in this unexplored region.

The cruise will then transit to the Concepcion methane seep area (CMSA) — the best-known seep on the Chile margin, first explored by Dr. Javier Sellanes, who is a collaborator in this venture. This seep, although well studied, has never been photographed, nor have sediments been sampled directly from the seeping seabed. We hope by having a live-video system to guide placement of our multicorer, we will fill in some knowledge gaps about this seep site and examine similarity of the fauna between the Chile triple junction region and the CMSA. We will be at the CMSA for only two days, but have high hopes of getting a lot done there. After this short stop over, we will part company with our ABE vehicle and its engineers, as they must immediately set off to join their next mission, sailing from the Galapagos Islands before our cruise ends.

Our next stop, the El Quisco methane seep is another area where we will be truly exploring again. This shallow-water seep lies at just 350 m (1,050 ft) depth, and is our northernmost seep site. Not only is it shallow but it lies directly in the middle of the oxygen minimum zone (OMZ), a natural zone of exceptionally low oxygen that is likely to impact the fauna we find there. OMZs represent a third form of reducing habitat that is different again from either vents or seeps. The shortage of oxygen present allows reduced chemical species like sulfide to be present on the sediments surface and in the overlying water column, which fuels large mats of filamentous bacteria. Live seep fauna have never been collected from the El Quisco region, but their remains have been recovered in trawls. Due to the shallow depth and the low oxygen present, El Quisco holds a very high potential for novel discoveries during the two short days we will spend there. This site also adds OMZs as a third type of reducing habitat studied on this cruise.

Our final stop is at the southern end of the Peru-Chile Trench, where we will explore the hadal zone (water depth greater than 6,000 m/20,000 ft). While not a reducing ecosystem, few areas of the globe remain as unexplored as these depths and the Peru-Chile Trench, stretching 5,900 km (3,666 miles) is among the longest trenches on our globe. Trenches are hard to sample because they are deeper than most scientific equipment can go, and sending samplers to the bottom and back takes many hours. We will be using our time there to study both the sediment and water column microbial fauna. At these depths we are still very much asking basic questions about what is there and how they deal with such high pressure (over 600 atmospheres).

Figure 4. Bacterial mats (left) and clam beds (right) are excellent indications of seep and vent activity. “The white and orange coloration on the surface of the sediments (as seen in the left-hand photo) are filamentous bacteria which are large enough to see with the naked eye.” We will be looking for these sorts of features in the sediment as we search for seep, vent, and hybrid habitats off the Chile margin. Image courtesy of CRROCKS/NSF. Download image (jpg, 128 KB).

We will tie together all of these sites by taking surface water and phytoplankton samples throughout the cruise. In addition to all the aforementioned aspects, the Chilean margin is also a region of intense upwelling. Upwelling brings nutrients, including trace metals, from the depths to fuel phytoplankton growth. Diatoms, a type of phytoplankton that form a “shell” (properly called a frustule) of opal, are especially good at out-competing other phytoplankton for nutrients, and are consequently globally important, providing 43% of global primary production.

On this cruise, we will be measuring how much metal is incorporated into diatom organic matter and their frustules. When the diatoms sink and are buried, the metals in their frustules will be removed from the water and will no longer support phytoplankton growth. (The nutrients will no longer be upwelled with the deep water.) With this study, we will be closing a gap in our understanding of elements like iron, nickel, and copper, which, through phytoplankton growth, provide us with air to breathe and fish to eat.

Throughout this 24-day cruise we will be exploring a unique region of the globe to find answers which have remained unanswered since these reducing habitats were first discovered decades ago.