Methane Bubbling Up From the Atlantic Seafloor. Who Knew?

The voyages of NOAA Ship Okeanos Explorer are filled with discoveries that sometimes take a while to reveal themselves, but then later alter our understanding of the physical world. That’s what happened in 2012, when the mapping team with the NOAA Office of Ocean Exploration and Research was conducting a routine sonar mapping cruise along the Eastern Seaboard, from North Carolina to the Canadian border. The goal of the 2012 Northeast and Mid-Atlantic Canyons expedition was to characterize an area of the seafloor where the continental shelf drops off into deeper waters. It’s an unexplored zone where undersea cliffs and canyons are home to important commercial fish species and rare deepwater corals.

But a chance encounter with a stream of bubbles by the Okeanos and the mapping team may have changed scientists’ understanding of how methane is transported from the seafloor into the ocean and atmosphere, as well as processes of ocean acidification.

It all began just before Thanksgiving 2012. Adam Skarke  and a few NOAA Explorers-in-Training were relaxing in the ship’s mapping room, watching the feed from the ship’s multibeam sonar. The Okeanos was cruising about 90 miles off the coast of Virginia, in waters about 1,500 meters (4,920 feet) deep. 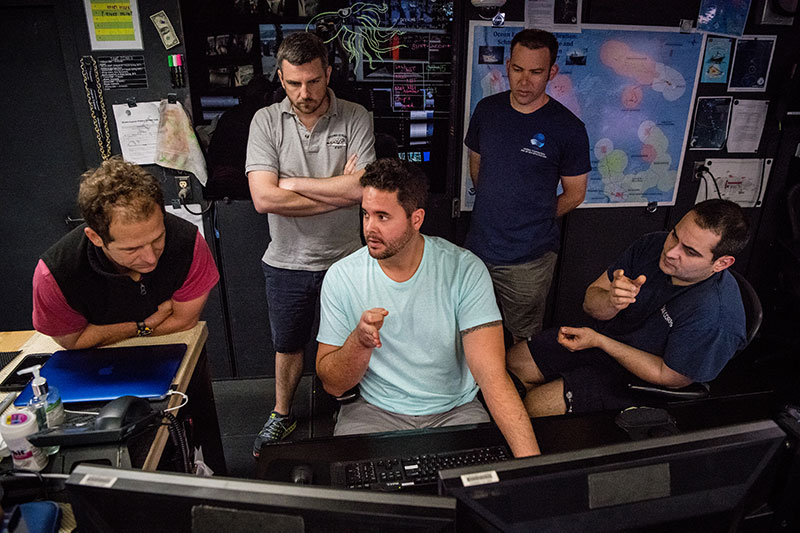 “I remember being in the mapping room and we saw these anomalous returns,” says Skarke, currently an assistant professor of geology at Mississippi State University who was the expedition coordinator and an oceanographer at the NOAA Office of Ocean Exploration and Research at the time. “We were used to a flat bottom, and then we saw these long, tall vertical returns on the sonar indicating that there was something off the seafloor that the sonar was reflecting off. We quickly recognized that they were likely streams of bubbles.”

How does a sonar device, which sends sound through the water column to scan seafloor features, “see” bubbles? Skarke says the sonar actually pings off the surface of the bubble where there’s a change from liquid to gas. Fishermen have used sonar devices for decades to detect a fish’s swim bladder, which is filled with air.

Skarke knew that methane bubbles had previously been detected in more geologically active zones off the Pacific Northwest, as well as the hydrocarbon-rich shallower waters of the Gulf of Mexico or in parts of the Arctic Ocean where warming waters are beginning to thaw out icy methane structures known as clathrates on the seafloor. But the continental margin of the Atlantic Ocean? It didn’t seem possible, but there it was -- the proof on the monitor. 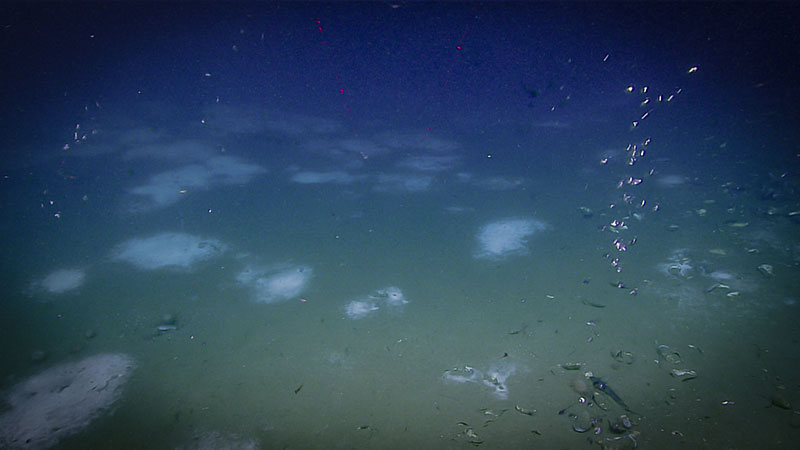 Bubble plumbs rising from the seafloor, such as those seen here, confirmed the presence of an active seep site. The areas of white coloration seen on the seafloor are Beggiatoa bacterial mats. Image courtesy of the NOAA Office of Ocean Exploration and Research, Windows to the Deep 2019.

“The East Coast of the United States has none of the features that scientists had traditionally associated with this kind of methane seep,” Skarke says. “There were no known hydrocarbon reserves and active faults. For these reasons, geologists assumed this margin was old and cold.”

The team went back to review the area and expanded the search, sending the data to colleagues at the U.S. Geological Survey (USGS) who confirmed that the sonar signature indicated the presence of a methane bubble stream.

Over the next few days, the team on the Okeanos found four seeps of methane between Virginia and Cape Cod in a region where nobody had seen them before. To Skarke, it seemed like an interesting find, but he wanted to know a bit more. As with many cruises, the data takes months or years to analyze.

The following summer, when Skarke was working at the University of New Hampshire’s Center for Coastal and Ocean Mapping , he received a visit from Mail’o Kodis, an undergraduate student at Brown University who was the recipient of a NOAA Hollings Scholarship.

“I explained to her that we found these plumes, that they could be indicative of geological processes, and we needed to go through the data,” Skarke said. “It sounded tedious, but she thought it through and agreed.”

Kodis spent the entire summer tediously scanning through sonar data bit by bit to look for methane bubble plumes on previous data sets from the cruise. “She asked me, ‘Can you guarantee me that something cool will come out of it?’ I said I couldn’t.” 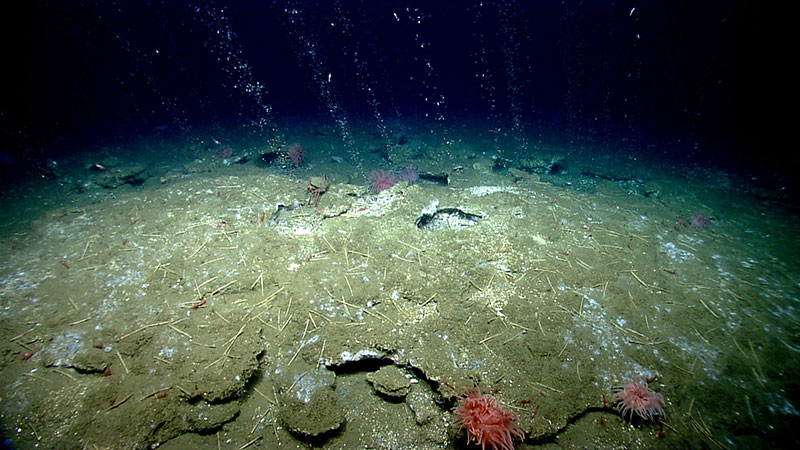 Methane bubbles flow in small streams out of the sediment on an area of seafloor offshore Virginia north of Washington Canyon. Quill worms, anemones, and patches of microbial mat can be seen in and along the periphery of the seepage area. Image courtesy of the NOAA Office of Ocean Exploration and Research, 2013 ROV Shakedown and Field Trials in the U.S. Atlantic Canyons.

Well, by the end of her internship, Kodis had found evidence of nearly 600 methane plumes along the edge of the Atlantic continental shelf. “It sort of blew my mind,” Skarke said. “It was amazing, and I never imagined there would be so many.” In fact, Kodis’ work did lead to a journal article that appeared two years later in Nature Geoscience .

With that publication came news articles, but also a renewed interest by other researchers. Teams sponsored by NOAA, the National Science Foundation, and USGS returned to the Atlantic seeps with remotely operated vehicles to further characterize the discovery and determine how long the methane has been bubbling along.

It turns out that the methane has likely been escaping from the seafloor for up to 15,000 years. That’s important because it means that scientists may have to recalculate the overall amount of methane that is being absorbed into the world’s ocean basins.

Skarke said the 2012 Northeast and Mid-Atlantic Canyons expedition was a perfect example of the serendipitous nature of science and why it’s important to keep exploring the ocean.

“The discovery represents the value that the Okeanos Explorer brings,” Skarke says. “We didn’t set out with a hypothesis that there were gas bubbles at the continental margin. It’s a discovery in that we found something we didn’t expect. It wouldn’t have happened outside of the structure that the NOAA Office of Ocean Exploration and Research and the Okeanos Explorer have. It demonstrates the value of the exploration mission.”