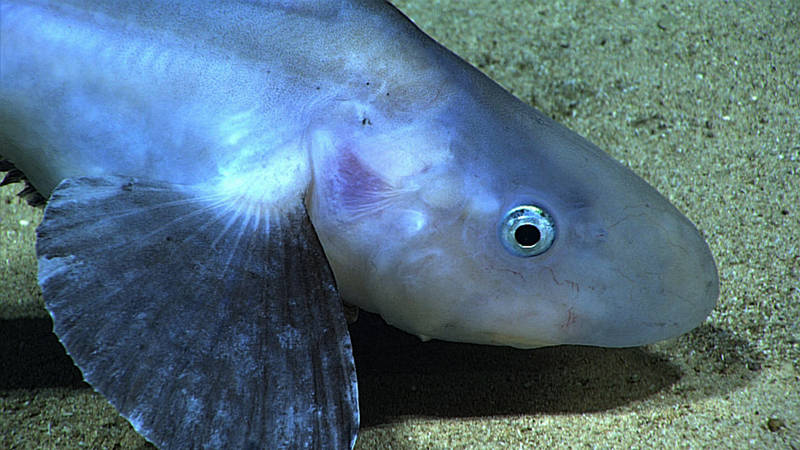 Potentially a new observation for Puerto Rico waters, this jellynose fish was observed at the end of our dive on Whiting Seamount at a depth of 545 meters. Image courtesy of the NOAA Office of Ocean Exploration and Research, Exploring Puerto Rico’s Seamounts, Trenches, and Troughs. Download larger version (jpg, 1.6 MB).

Today’s dive was the first ever exploration of Whiting Seamount. ROV Deep Discoverer landed on a rubble strewn slope at a depth of 1,301 meters. This dive traversed from the Cretaceous-Eocene basement across the unconformity with the overlying Late Oligocene to Early Pliocene Platform sequence. Several species of corals and sponge were observed during this dive, many new for this expedition, including a few black coral, bamboo coral, an unknown purple Plexaurid, and cup corals. At least 15 fish species were observed, including tinselfish, a few species of rattails, several cusk eels, Darwin’s Slimehead, and catsharks. Numerous species of crustaceans were seen during our transit upslope, including squat lobsters and “decorator” crabs. Seastars, brisignids, crinoids, and ophiuroid brittle stars were also common. We also documented at least two range extensions, as a Shaefer's anglerfish (Sladenia shaefersi) and a jellynose (Ateleopodidae) were not previously known to occur off Puerto Rico.