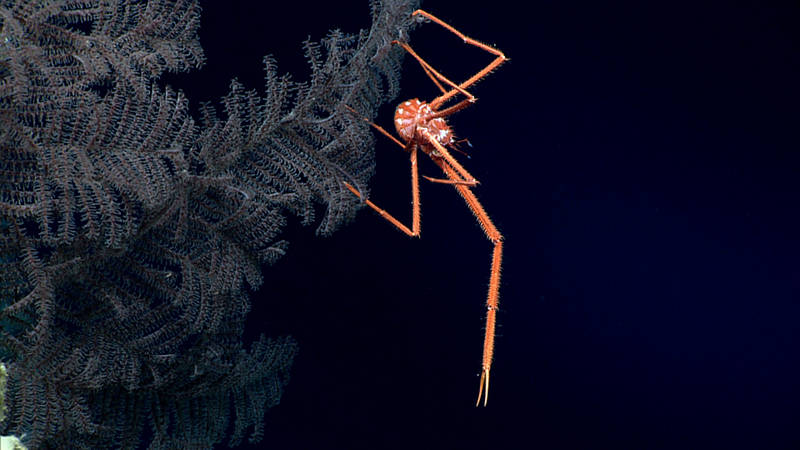 Highlights from Dive 10 to explore two unknown sonar anomalies just south of St. Croix. These anomalies were identified a few weeks prior to the dive by colleagues at the National Ocean Service on NOAA Ship Nancy Foster. Video courtesy of the NOAA Office of Ocean Exploration and Research, Océano Profundo 2015: Exploring Puerto Rico’s Seamounts, Trenches, and Troughs. Download (mp4, 76.0 MB)

Today we had a fantastic dive on two unknown sonar anomalies just south of St. Croix. These anomalies were identified a few weeks ago by our colleagues at the National Ocean Service on NOAA Ship Nancy Foster. After processing their data, the scientists were unable to determine what the origin of these features, so they asked Okeanos Explorer to investigate. ROV Deep Discoverer (D2) landed on a sedimented seafloor at a depth of 870 meters and began to transit upslope to investigate the unknown feature. Both features that we investigated had a high diversity of fauna and were on a mud covered surface that is likely the top of the Pliocene-Miocene carbonate platform. The first pinnacle was approximately circular with a diameter of 200 meters and a height of 50 meters. The lower part of the mound consisted of iron manganese-coated carbonate debris with some mud covering. Larger, rounded carbonate boulders formed the mid part of the slope and the upper surface was largely mud covered. The second feature (~930-915 meters water depth) was smaller and also consisted of iron manganese-coated carbonate rubble. Coral and associate diversity was high on both features. Interestingly, there were different coral species present on the mounds surveyed in different depths. At least 26 species of black corals, octocorals, cup corals, and other stony corals were observed. We also saw several sponges, brittle stars, squat lobsters, barnacles, fish, shrimp, urchins, and hermit crabs. Most of the species observed today were new observations for this expedition. The origin of the pinnacles remains an enigma, with perhaps the most likely explanation being that they are blocks that slid down from the slope-shelf break up slope that are breaking down in situ.